“How to combine all the possible phobias in one tiny pool…” 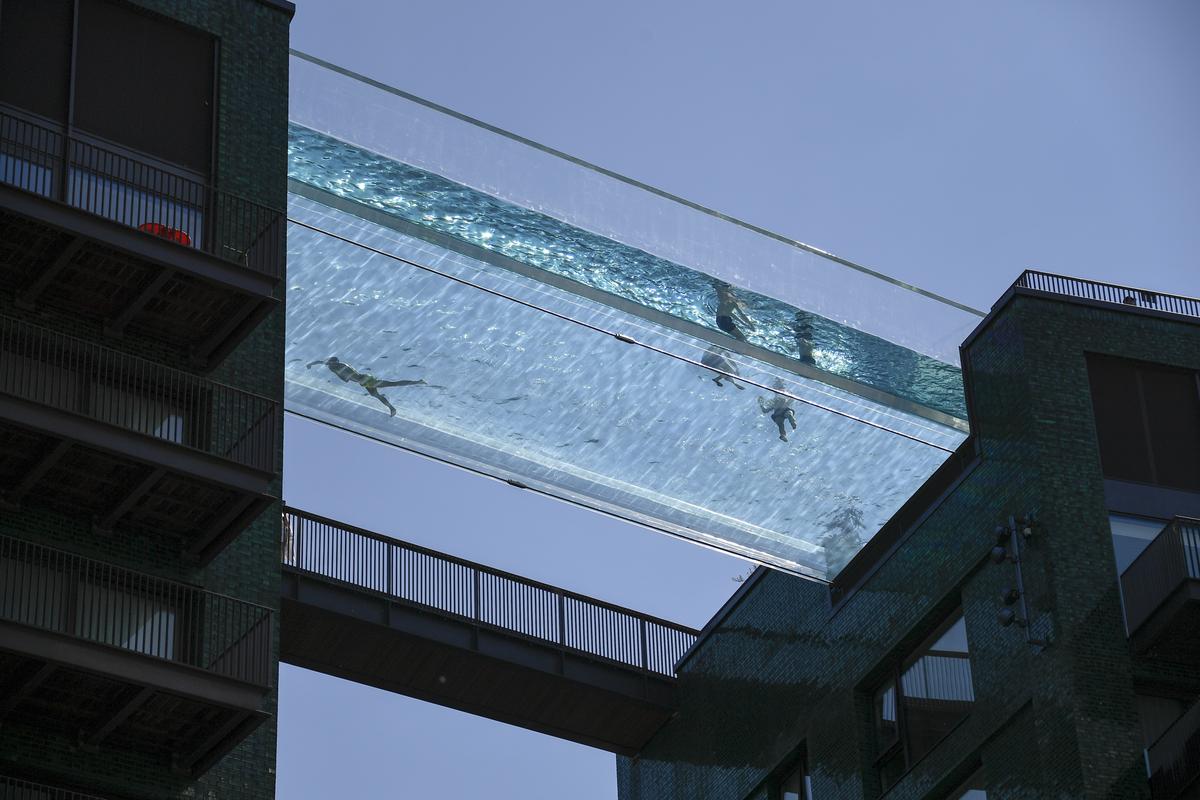 Shirk your self-consciousness and whip out your bathers: the world’s first “sky pool” has opened up in London.

Located in the Nine Elms – a place which describes itself as “the greatest transformational story at the heart of London” as well as “a new residential, cultural & business quarter” in “the world’s greatest city” the completed structure of the pool now sits 115 feet up in the air, suspended between two luxury tower blocks.

The pool is suspended between the 10th floors of the two tower blocks, which neighbour the U.S embassy, Hypebeast reports.

The pool is 3 metres deep, 25 metres long, 5 metres wide and the water reportedly weighs around 375 tonnes.

As 9.com.au reports, “Located close to the south bank of the Thames, bathers will be able to take in views of the London skyline, including the London Eye and Westminster.”

While it has been reported that access is only open to the complex’s residents (where prices for a flat reportedly range between $850,000 USD and 1.4m USD), Twitter users have alleged it is actually even more exclusive than that, and that only some flat owners have access.

There’s a mistake in this report.

In any case, footage of swimmers sculling around on a warm afternoon has left many online thinking about how it would feel to take a dip. Spoiler alert: not many were keen.

All I can think about is his dude drilling into the bottom of the pool. #TheMechanic pic.twitter.com/GtOyRQmHTP

Another wrote: “After seeing recent cases of glass shattering in various attractions around the world, From a vertigo and safety paranoia angle, thats a hard NO from me.”

Also this of Willis tower in Chicago (on multiple occasions) – https://t.co/S0wo1OAHsO

Hundreds of wary comments have built up underneath the BBC’s Twitter post, with one user writing: “How to combine all the possible phobias in one tiny pool: Falling, drowning, virus exposure, swimming in the urine of strangers…That’s a hard ‘no’ for me!”

How to combine all the possible phobias in one tiny pool:

Falling, drowning, virus exposure, swimming in the urine of strangers…

Likewise, on Instagram, users worried aloud that in a pool like this is would be pretty obvious who the “pee culprits” would be as well as writing ~zingers~ like: “drowning in mid air is the new definition of wealth.”

Another wrote: “Will be quite embarrassing if someones trunks come out while swimming.”

Whether this is all a little too Citizen Kane for your liking or whether you wish you had one at your house, you have to admit, it looks damn cool.