Help could be right under your nose. 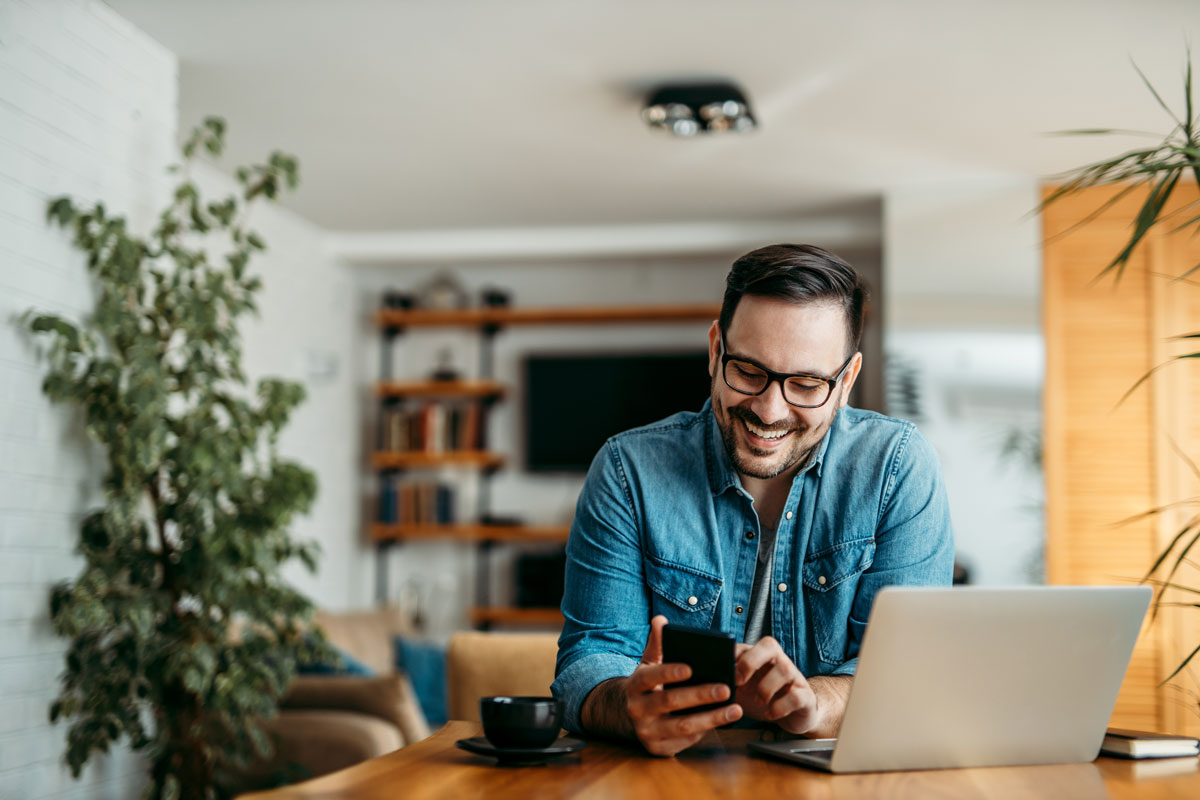 Looking after your mental health became almost as important (arguably more) as wearing a face mask over the last year. Lockdowns, being told to stay inside your home, not being able to travel internationally and not being able to have regular catch-ups with family and friends all made for one big lonely cocktail for many people. Looking after yourself has become more important than ever.

But sitting up and taking stock of your personal mental health isn’t something we’re all accustomed to. Yes, there are millions who already practice meditation, reading positive affirmations back to themselves or phoning friends for advice or simply just to speak to somebody. But for others, the thought of where to start looking after their mental health is a battle all in itself.

However, this is the 21st century. There are myriad apps available to download through the app stores on our smartphones that give us the tools to write down daily thoughts, give us guided meditations, or to act as a daily reminder to get into a positive routine.

But as humans – and men especially – we want to be seen as stoic and tough, and we like to brush away any help because we like to accomplish goals on our own. Though this stereotype is finally starting to be seen for what it is (damaging), it’s still hard to just click your fingers and suddenly accept yourself for who you are (or what you need).

Throw in the fact that our lives are already saturated with technology, and you start to see why many men are still reluctant to use mental health apps.

The tides are now changing, however.

Instagram – quite possibly the most popular app on the planet – could be a catalyst for change. The photo-sharing platform is a huge source of meme accounts, which traditionally are designed to create laughter or controversy, but there are a few that promote mental health apps – albeit in a meme-like fashion – that could help to pave the way to such apps being ‘seen’ by millions more users. And if only a handful of people download and use the apps as a result of seeing these meme posts, it’s still positive news. 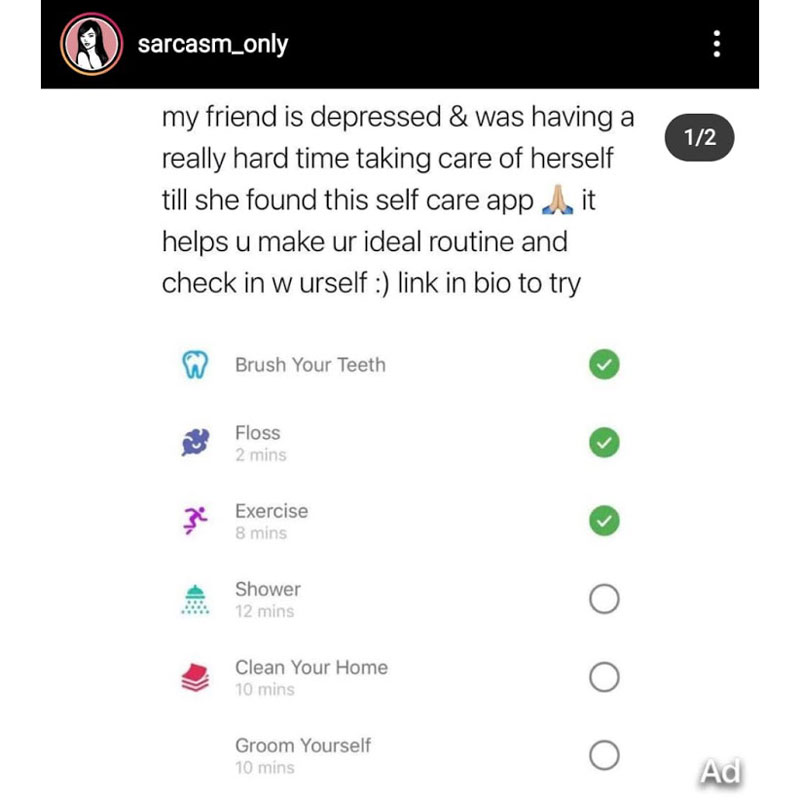 One overzealous Instagram user on the DMARGE team spotted this particular post as an example. Found on the account @sarcasm_only, which is a goldmine for hilarious and shareable memes, the post refers to a self-care app that lets you create your ideal routine (and reminds you to do some of the basics that you might not feel like doing when you’re in a bad place).

It also helps you realise you’re not the only one who might benefit from something like this.

It’s not just the serious side of meme accounts that can help people. The jokes can too. Though we need to be careful not to confuse self-care with self-indulgence (see: Why We Should Be Wary Of Australia’s New Self Care Culture), Headspace, Australia’s National Youth Foundation Centre, has actually found that approaching mental health in a “non clinical” way, “Like finding a meme that captures your feelings and worries into a funny image,” is breaking down the stigma attached to talking about mental health issues.

what you call a nervous breakdown i call oops, accidentally saw things as they are

Luke McLeod, Founder of, and Meditation Teacher at Soul Alive, told DMARGE, “I think overall any channel or opportunity to share and spread a good message is a good thing.”

“Although I do get cautiously nervous when things become too ‘trendy’, as they tend to lose some of their depth when this happens and the original intention and essence can be dulled, or at worst, taken advantage of.”

“In saying this, I’m more in favour of infiltration and adoption as an effective means to sustainable change, rather than conflict campaigning.”

“Meaning, pro use of technology and meeting people where they’re at, rather than trying to convince them of another way.”

“The latter method, to me, seems to just prolong indifference and segregation. Where if we at least ‘join the party’ we then have the opportunity to change the music and vibe for everyone from within.”

Adding to Luke’s statements are some previous comments DMARGE received from former AFL star Tom Derickx about his battles with mental health and how he learnt to deal with issues and overcome them, to eventually become an ambassador for R U OK?.

Admitting he was always “quite naive” about the very subject, and being “unaware of the symptoms of anxiety and depression”, Tom was always in doubt about whether to seek help or simply bottle up his emotions. This, as Dr Lars Madsen of The Mindshift Foundation has told DMARGE previously, is “not helpful really, the whole harden up, suck it up kind of mentality.”

“We need to be able to be gritty to achieve to achieve those things that mean so much to us, and gritty means being able to stick it out and get through the challenging times,” Madsen said.

“However, [when this is] a blanket approach to [everything in] your life… then that’s when it becomes problematic. That’s when it’s toxic and damaging to people.”

“These tough guys see it as a weakness [to talk about their emotions],” he continues, “but if we slowly start cracking away at them, they get to experience the benefit of opening up.”

“One of my biggest messages that I preach is about connecting with others and community. I’m lucky to be surrounded by awesome family and friends, and we’re all very vocal about how we’re going, where we’re at mentally and physically.”

If mental health apps shared via meme pages can help encourage further conversation, then we’re all for it.