If you’ve got it, flaunt it…

Real Madrid legend Sergio Ramos is 35 and isn’t slowing down any time soon. Though he has endured knee and calf injuries this last season, he now appears to be well on the road back to full fitness with some scintillating summer workouts.

He’s also rocking some scintillating activewear. As his latest Instagram video, posted to the platform on Wednesday night (Thursday morning in Australia), shows, the iconic centre back has now joined the likes of Milo Ventimiglia and Conor McGregor in rocking Lots Of Legs.

RELATED: Conor McGregor Shows You How To Wear Short Shorts In The Gym Without Offending The Public

In fact, Ramos has arguably surpassed the efforts of the Irish MMA star and the Hollywood heartthrob, stripping down to his underwear in a move almost as controversial as Shia LeBeouf’s October 2020 activewear crime.

Though we’re all here for it, the prudes might encourage him to at least put on some shorts.

In the video, Ramos can be seen wearing white and red gloves, long white Nike socks, Nike trainers and the aforementioned Nike underwear (or glorified underwear, it’s hard to tell).

The clutch player starts off ambling down a driveway or path of sorts, perhaps of his house or community, perhaps of the street, towards the camera. When he reaches the bottom he turns and sprints up the hill to the top. He then celebrates by raising his hands over his head.

Commenters were quick to liken him to the similarly ripped and heavily tattooed aquaman, while others implored him to stay at Madrid (in a move that has proven futile, as reports emerged two hours ago from the time of writing that Ramos is now leaving Madrid after 16 years at the club).

In news that will have flecks of tears in Los Blancos fans’ eyes all around the world, Ramos is set to announce his departure from the club on Thursday.

As the SBS reports, “The La Liga giants confirmed there would be a farewell tribute to the 35-year-old, whose contract expires at the end of the month.”

“It will bring to an end the defender’s 16-year association with Los Blancos.”

This is not the first time Ramos has shown off his ripped figure and intense workouts. In recent months DMARGE has reported on him doing everything from gruelling rehabilitation workouts to unstoppable beast mode workouts. In order to succeed at his new club, he will need to get back to peak fitness and continue doing them.

Ramos has transformed dramatically over the years. As DMARGE reported in May 2020, this could have a lot to do with his diet, as well as training. 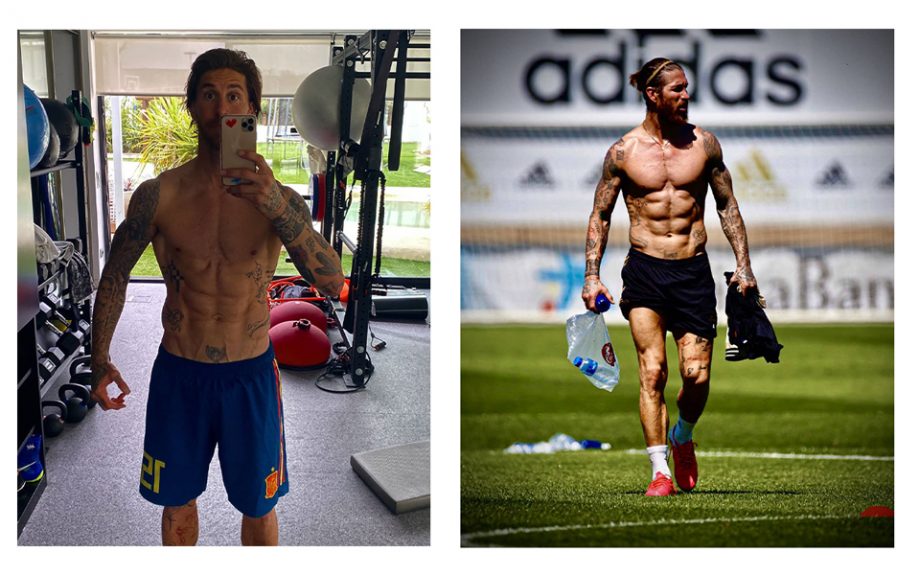 So what exactly is Ramos’ secret? We asked Ben Lucas, founder of Flow Athletic, to give his professional opinion. Ben told us that while it’s clear he’s been exercising a lot, a lot of his transformation can be put down to a good nutritional diet.

“In order to achieve [this] look in such a short amount of time his diet would have also been a factor. I would assume he has been limiting alcohol and sugar given his body and an increase in protein. This could be in the form of eggs, meat and supplements.”

But of course, even though what happens in the kitchen is incredibly important, what you do in the gym is an equally prevalent factor. “Exercise wise it looks like the biggest changes have taken place in his chest and abs,” says Ben.

And if you want to achieve a rig like Ramos, Ben has provided a few exercises to get you on your way.

The ball’s in your court.