One small step for man, a giant fail for mankind. 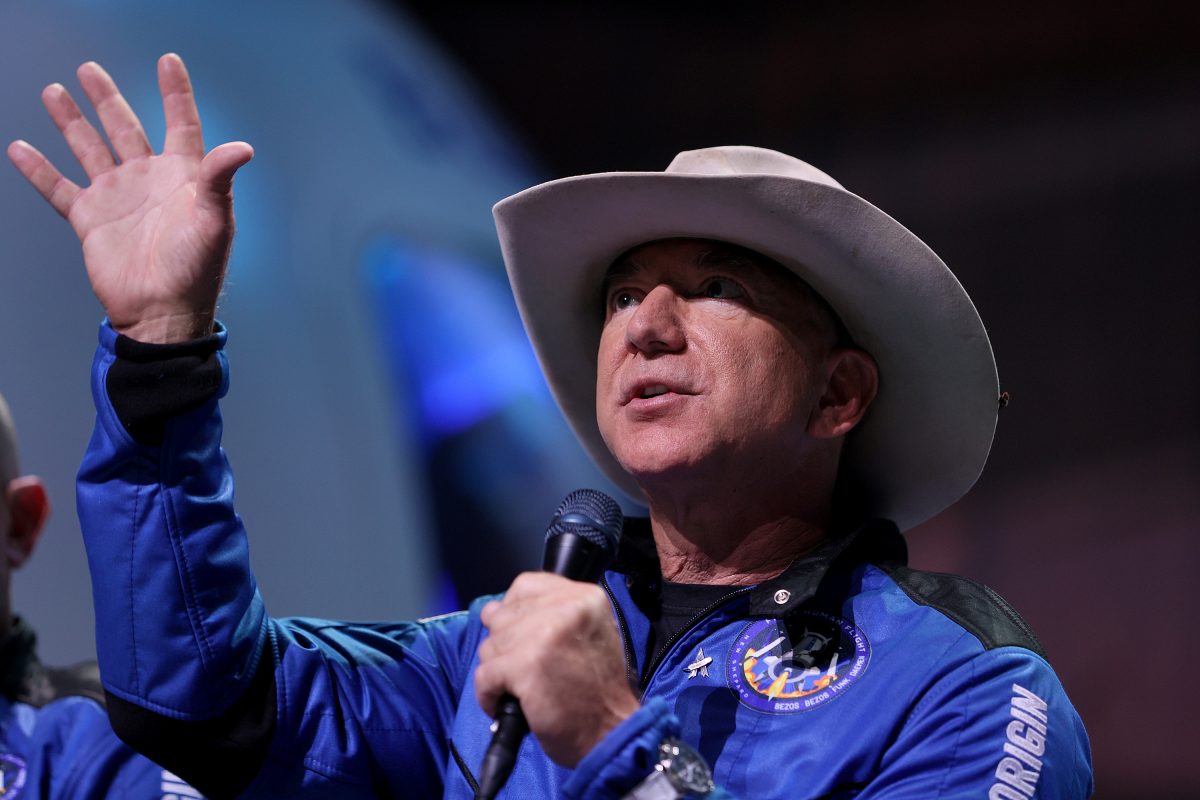 Jeff Bezos speaks about his flight on Blue Origin’s New Shepard into space during a press conference. Image: Getty

First: context. Earlier this week, Bezos – along with his brother Mark, 82-year-old Mercury 13 candidate Wally Funk and 18-year-old Dutch student Oliver Daemen (who just happens to have a millionaire father. Funny that) – took off in Blue Origin NS-16, a sub-orbital spaceflight mission that’s been widely panned as one of the most expensive and unnecessary marketing stunts ever.

We’re not going to get into the ethics of Bezos’ spaceflight. What we are going to talk about is his style. Bezos wore a randomly huge cowboy hat before and after the flight, which we find mildly confusing but forgivable. What troubles us, however, is the weird way he was wearing his expensive Swiss watch.

Bezos was spotted wearing an OMEGA Speedmaster Professional on a custom Blue Origin velcro strap… But on the outside of his jumpsuit. Most watch fans go to great lengths to have their watches sit under their shirt cuffs but it seems Bezos missed that memo.

Naturally, the Internet has been quick to jump on Bezos’ watch fail, with popular social media comedian Elliot “fuckjerry” Tebele and watch culture satirist Horological Dicktionary just two of many voices having a dig at the billionaire’s expense (as well as OMEGA fans, to a lesser extent). 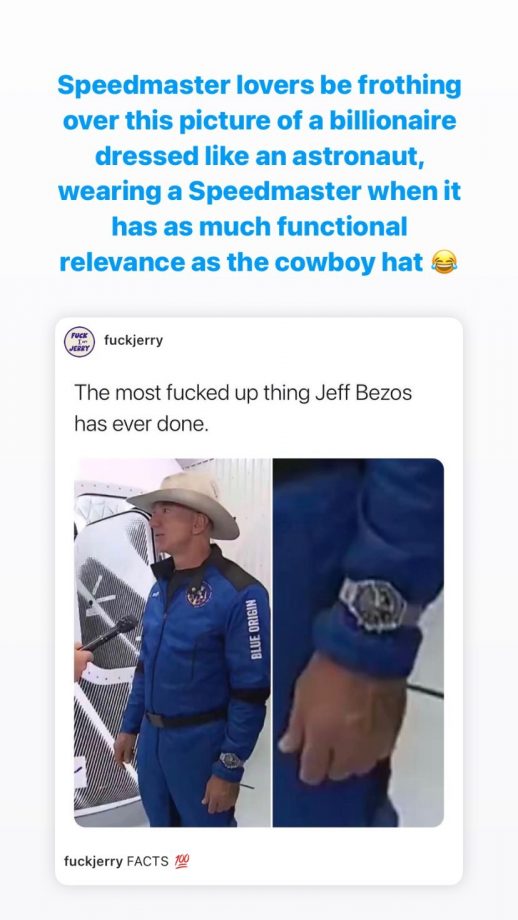 It’s worth pointing out that real astronauts traditionally wear their watches on the outside of their spacesuits, too. But Bezos wasn’t wearing a spacesuit per se – nor was he actively piloting his flight or expected to do any real space ‘work’ on his million-dollar joyride. It’s an affectation. Like the whole bloody flight…

We’re also in two minds about his choice of watch. The OMEGA Speedmaster Professional, of course, is famously associated with the history of space exploration – immortalised as ‘the first watch on the moon’ thanks to its use by Neil Armstrong, Buzz Aldrin and Michael Collins during Apollo 11.

RELATED: OMEGA Gives Its ‘Moonwatch’ A Much Anticipated Upgrade

But it’s also a 64-year-old watch design; it’s archaic. In 2021, there are far more practical, technically advanced timepieces that are far better suited to the potential rigours of spaceflight than a pricey Swiss mechanical watch. Maybe a G-SHOCK would have been a better choice – indeed, it’s the choice of many modern astronauts.

That said, OMEGA watches – including the classic Speedmaster Professional – still see plenty of use in space, in part because they remain the only watches officially certified by NASA to be able to handle spacewalks. Canadian astronaut Chris Hadfield famously wore a Speedmaster Skywalker X-33 during his time on the International Space Station, but unlike the OG Speedmaster, the X-33 is a highly modern watch: made from titanium and featuring a quartz movement plus a hybrid digital display.

Naturally, you’d expect that SpaceX’s founder Elon Musk would be lining up next, but according to recent interviews, he’s apparently uninterested, Yahoo! Finance relates. But Musk is hardly known for keeping his word… We wonder what watch he’d choose to wear to space. A Raketa, maybe?