Working Out In A Mask: The Truth About What It Feels Like

“Within just a few front squat reps I immediately noticed how much I took breath for granted.” 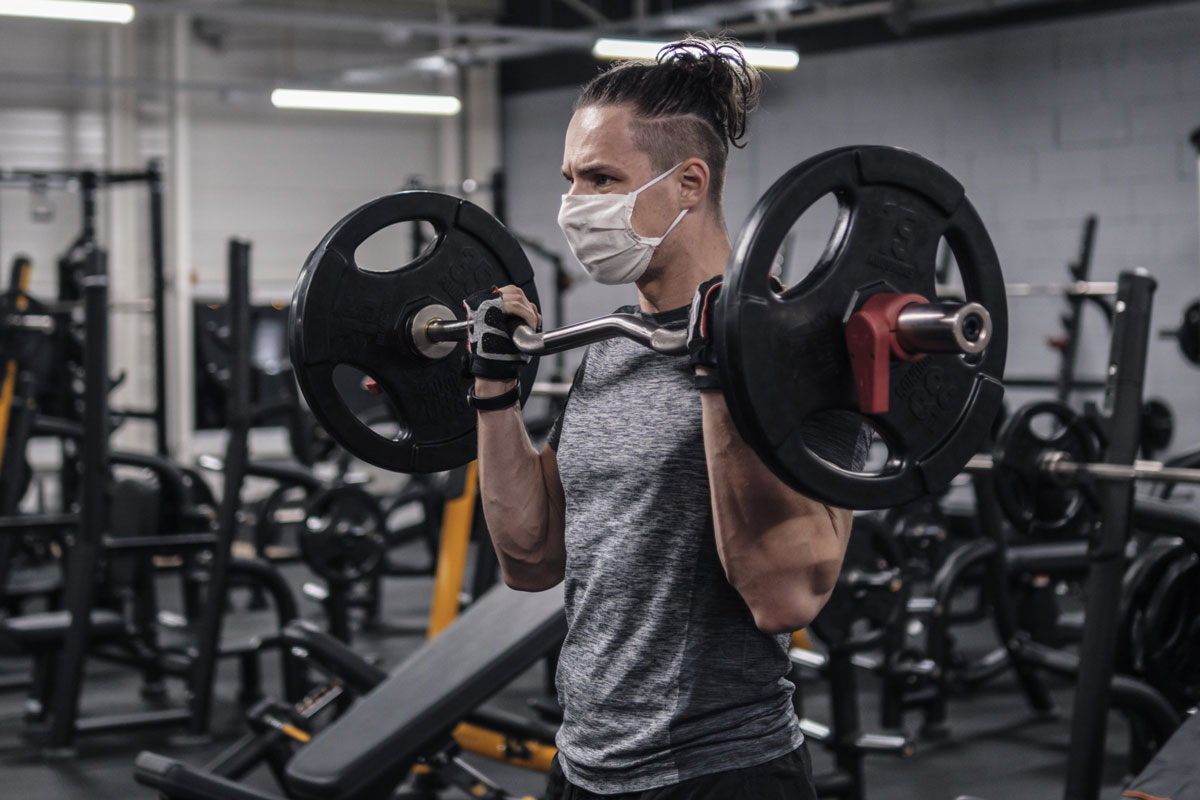 Our experience living with The Spicy Cough has been a roller coaster. Following some strict lockdowns and restrictions in the first part of 2020, for Australia, late 2020 and early 2021 was comparably easier. We were free to move around the country, music gigs came back and relatively large crowds were been able to gather again – until recently.

But that what goes up must come down. Following a new outbreak in Bondi, Sydney, Australia has had to once again batten down the hatches and re-impose restrictions. This time around, those restrictions include having to wear masks while at the gym (for those of us in areas where gyms haven’t been forced to shut completely).

During the 2020 March lockdown in NSW, gyms and fitness clubs were kept shut for some time, before eventually welcoming members back when the situation cleared up, months later, mask-free.

This time all gyms in Sydney are closed, and gyms in other areas (like Byron Bay, where I currently live) are requiring masks. It’s also thought if and when gyms do re-open again in Sydney there will be more nuanced restrictions (like mask-wearing).

On that note: I thought I’d see what it’s like for myself, as it’s something many people may find themselves doing down the line.

As someone who finds himself quite happy and at home (and free-feeling) in the gym (but who still wants to do their bit for public health), I was nervous to see what working out in a mask would feel like.

Masks restrict your breathing, and breath is something you need when you’re putting your body through its paces. That’s what I thought anyway, despite studies saying “face masks don’t impede breathing during exercise, but your mind may think they will.”

So, what is it like wearing a mask to the gym? This is my personal account, and despite not achieving the feat myself, I can only liken it to climbing Everest (or perhaps training for it).

The main takeaway is that I didn’t expect it to be as hard as it was.

I’d comfortably call myself pretty fit. I work out regularly and I keep active as active as possible when I’m in the gym – I’m even trying to eat like Chris Hemsworth to bulk up and attempted a gruelling core workout in the name of six-pack abs. This, coupled with the fact I had one of Uniqlo’s rather excellent and comfortable breathable masks on, I thought I wouldn’t notice much of a difference.

Within just a few front squat reps I immediately noticed how much I took breath for granted. Breath is essential when performing squats. You need to inhale on the downward movement itself to help stabilise your body and core, push up and then exhale. But, not being able to take in as full of a breath as I would normally be able to, made a noticeable difference to my stability.

I was still able to lift the same amount as the previous week, sans mask, but it tested my cardio more.

As my gym program continued, I noticed myself becoming more fatigued far quicker than normal and if anything, I felt incredibly constricted. It wasn’t a nice feeling and I contemplated cutting my routine short so I could get back outside and bask in fresh air.

But, feeling like I’d let myself go a little in previous weeks (and wanting to test it out for anyone else curious who may also be working out in a mask in the coming weeks), I did something I would normally never do: cardio. Specifically, treadmill sprints.

The last time I did sprints was a good year or so ago, and I was able to go for a solid 10 minutes: 30-seconds on, 1-minute off, slight incline and speeds of around 16-18. I’ve gotten fitter since then, so it should be a walk in the park, no? No. It wasn’t.

Managing just five minutes on the treadmill and three sprint windows instead, I was on the verge of losing all feeling in my body. I increased the time of my sprint window to 1 minute, at speed 17 and an incline of 3. The first 30 seconds were ok, but after that it was quite literally an uphill struggle. Powering through it with gritted teeth (hidden by the mask, thankfully) I called it a day after my third sprint.

I wouldn’t say I was gasping for air in the same way someone who’s choking would be. I could still breathe, but the mask made it harder to regulate the breath. I haven’t been able to get to the gym as often as I normally would in recent weeks, but I’m willing to admit it could just be a case of adapting, and after a few more sessions, I’ll understand how to better use the breath on offer.

I did wonder if wearing a mask would allow for hypoxic training, otherwise known as oxygen restriction training, whereby you deliberately limit the amount of oxygen you have in the search of greater performance. And again, the benefits of this could be made apparent after a few more sessions. I’ll keep you posted.

As for the future, though it’s possible Sydney’s lockdown could still end on time this time around, there are no guarantees. This is a crucial moment for the city and the country – all more reason to do the right thing and wear a mask where you are supposed to.

There’s also the likelihood that even if the lockdown ends there will be certain restrictions in place (like, potentially, mask-wearing in gyms) in the near future. So I might have to just get used to it.