Even better than a medal… In our opinion, at least.

Cody Simpson’s come a long way since his teeny-bopper days.

The now 24-year-old Australian singer/songwriter, who was catapulted into the limelight at the age of 13, has since added many more strings to his bow: he’s now an accomplished dancer, actor, model and most notably, swimmer.

This isn’t a case of Michael Jordan trying baseball or Mariah Carey trying acting: Simpson’s a genuinely competitive swimmer who’s a member of the University of Southern California elite swim team. Many Aussies were pleasantly surprised to hear that Simpson had qualified for the Australian Olympic trials in the 100m butterfly – although despite setting personal best times, he failed to qualify for the Tokyo Olympics proper.

Still, it’s impressive that he’s not just a talented musician but a talented athlete as well – as well as a man with good taste in watches. Simpson shared a photo to his Instagram Story yesterday of himself chilling on the Gold Coast (his hometown) wearing a Tokyo 2020 OMEGA Seamaster 300M which we wish we had in our collection. Who needs an Olympic medal when you’ve got a very cool Olympic watch? 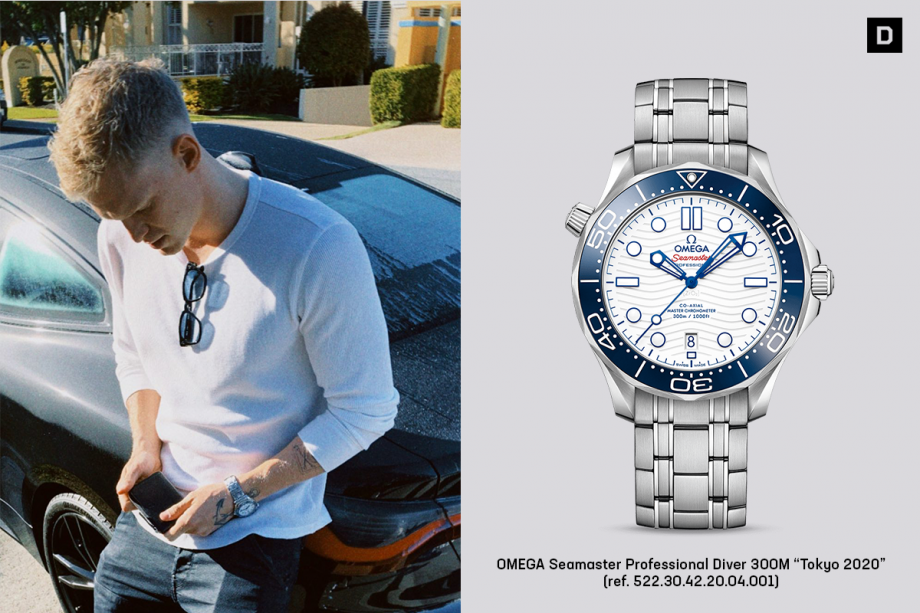 OMEGA might be best known as the brand boasting “the first watch on the moon” but the storied Swiss watchmaker has also been the official timekeeper of the Olympic Games since 1932. Naturally, they produce a series of limited-edition models to commemorate every Olympic Games, with Tokyo being no exception.

RELATED: The Coolest OMEGA Watches To Score In 2021

For Tokyo, the brand produced five Seamaster limited editions: three Aqua Terra variants, a Planet Ocean and the Seamaster 300M Cody chose to snap up. They also released five limited edition Speedmasters, inspired by the five colours of the Olympic rings – although sadly these were a Japan-only release.

Last year, when it wasn’t clear that the Tokyo games would actually go ahead, some watch fans were speculating that these models would become real collector’s items – the allure of a watch from a games that didn’t happen a self-explanatory novelty. Thankfully (or perhaps regrettably, depending on your perspective) the games went ahead.

Simpson’s said he wants to continue focusing on his swimming career alongside his music – he’s still young, so fingers crossed he can keep working on his times and maybe we could see him at the Paris 2024 Games. They’re only three years away…

RELATED: Here’s How To Become An Olympian While Putting In As Little Effort As Possible

Cody’s journey to the Australian Olympic trials has become the focus of a documentary called Head Above Water, which you can watch on Amazon Prime Video.