Michael B. Jordan Shows You How To Rock High-Waisted Chinos Without Talking Through Your Zipper

They say diamonds are formed under pressure. But what does that have to do with Michael B. Jordan?

Well, we reckon the 34-year-old actor and current “sexiest man alive” (according to People magazine) must be under immense pressure to make sure he’s worthy of that lofty title. I mean, he was a ‘diamond’ before he was dubbed the sexiest man alive, but he’s definitely become even sexier since.

Part of the Black Panther star’s sex appeal comes from his dress sense. He’s always got his finger on the pulse when it comes to the most innovative new style trends but he has a certain sense of tact; a je ne sais quoi about how he jumps into them.  He’s got a real gentlemanly touch when it comes to fashion.

His latest outfit is emblematic of his impeccable sartorial taste. Out on the town last week in Los Angeles with his girlfriend Lori Harvey (daughter of game show host Steve Harvey), Jordan looked slick and summery in a patterned rayon shirt over a white tank top, gold chain, chunky black army boots and the pièce de résistance – some high-waisted, exceptionally crisp chinos. 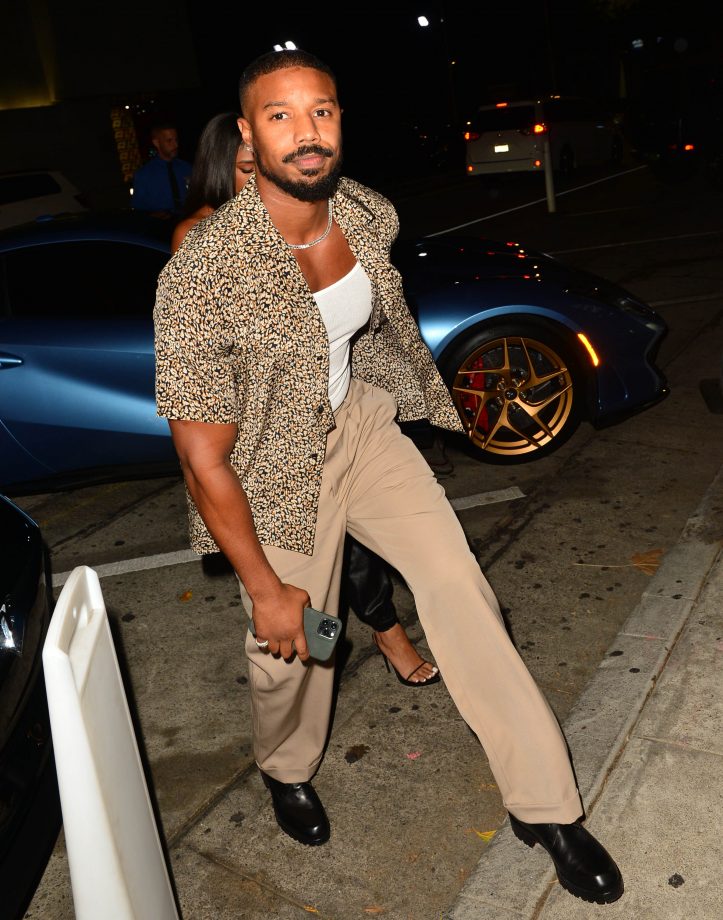 It’s an unconventional look: military officer meets beach bum? But we have to say, it works. The summery, light tones of his shirt and pants contrast in a satisfying way with his boots… And the earthy-toned fit contrasts even better with his light blue Ferrari (which you can see in the background).

It also shows that you can rock some traditional, high-waisted chinos without looking like your grandfather or a sex offender.

Jordan’s approach to summer fashion in 2021 is a rather refreshing one. Take this short-sleeve knitted shirt he rocked earlier last week, too – the world’s sexiest cardigan – an eclectic choice that demonstrates Jordan’s Midas touch.

It all goes to show that the most important element of men’s fashion is confidence. Jordan takes these looks from a 9 to a 10 out of 10 thanks to his confidence. I mean, if people call you the sexiest man alive, you’d have no choice but to radiate confidence…

Like Michael B. Jordan’s style? Wait until you see his fitness. Watch the following video to see how he keeps himself in shape.