Will we get there by November? 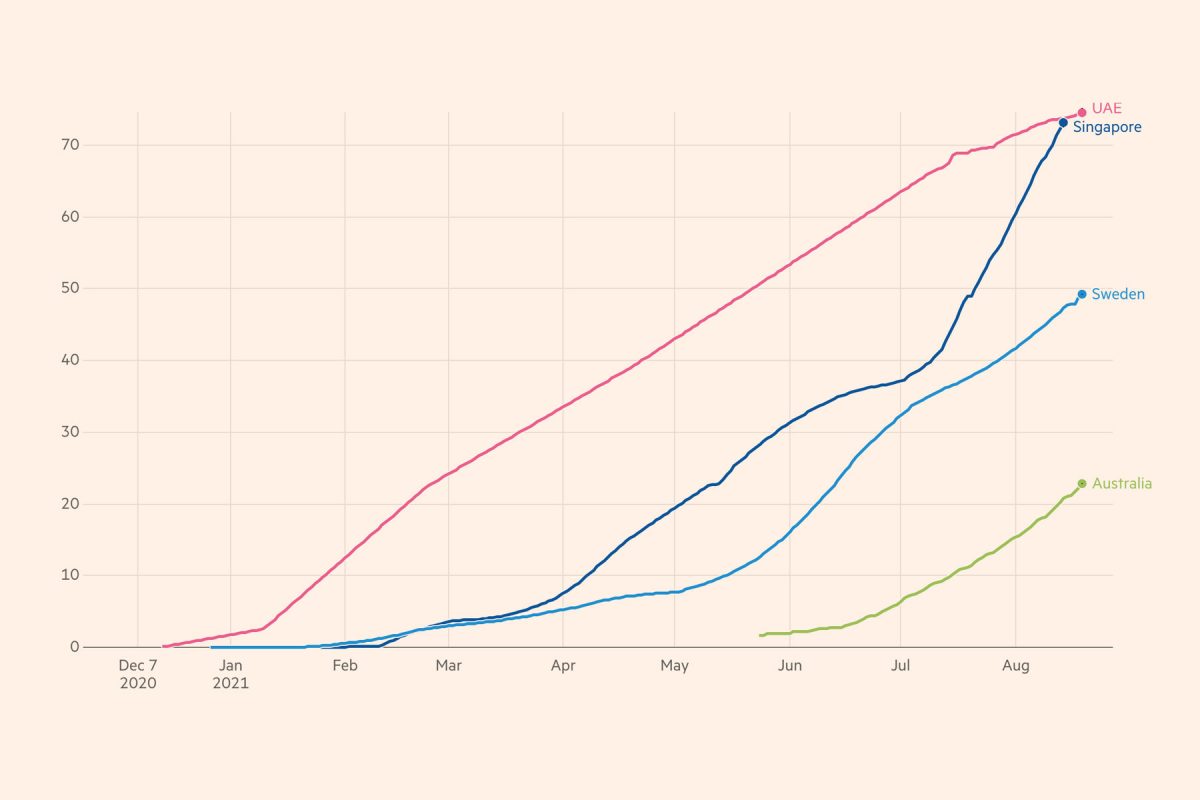 Australia is currently battling the ugliest head of COVID-19 – the Delta variant – and case numbers don’t look like slowing soon.

There is another way out of this mess though than lockdowns; vaccinations.

Thanks to an evolving situation meaning evolving medical advice (young people have only been started being encouraged to get AstraZeneca in the last few months), however, there has been some stifling vaccine hesitancy across pockets of the country.

In light of the rapidly increasing needle in arm uptake, the government has started making some positive noises regarding milestones we might hit in November and December.

Given the original plan was to have the entire country inoculated by October though (which hasn’t happened), you could be forgiven for being sceptical that we will hit this new target.

So how likely are we, really, to have 70% of Australians fully vaccinated by November (we’re currently at about 29%). Let’s look at some statistics from countries that have already hit the 70% milestone.

At the time of writing, according to Financial Times, only four countries have hit 70% of their population – UAE, Malta, Singapore and Uruguay (with 17.7, 0.8, 8.7 and 5.3 million doses given respectively). 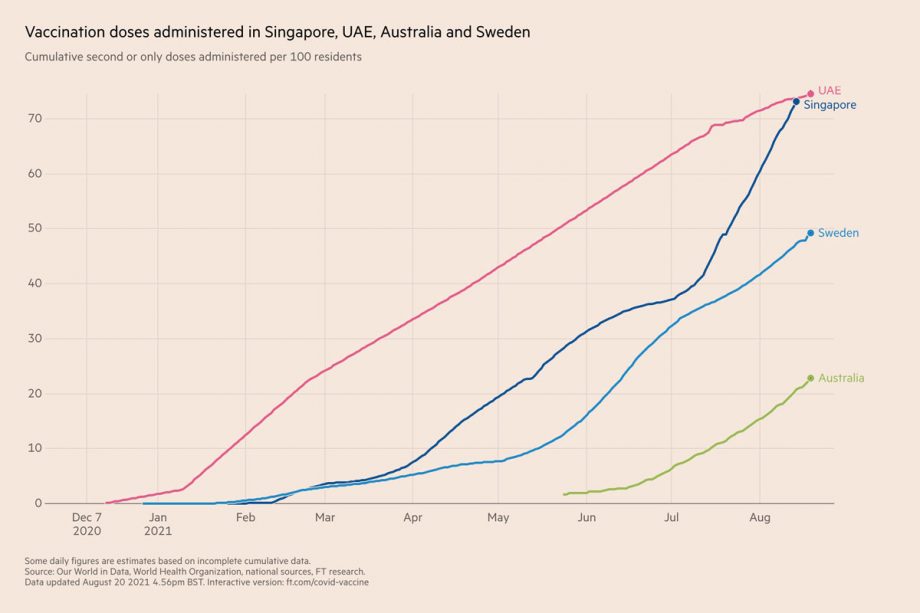 The latest data from the World Health Organisation shows it took Singapore 77 days (May 26th – Aug 11th) to go from 29% vaccinated to 70% vaccinated. Singapore has a population of 5.7 million.

Considering we have a significantly larger population than the likes of Israel, Uruguay, the UAE and Singapore, that looks like a very big ask.

One statistic which works in our favour is that we already have a reasonably large percentage of people who have already had their first jab (over 50% of those over 16).

With more and more people rolling up their sleeves and getting the jab, with companies like Qantas offering vaccine incentives and with a population now being told we are going to have to live with the virus (and vaccinate our way out of this) rather than rely on lockdowns, who knows, maybe we’ll get there by November.

NSW Premier Gladys Berejiklian has this week said we must “accept the reality of Delta” and that we “can’t pretend we’re somehow extremely special from everywhere else in the world and we can’t pretend that any amount of lockdown alone is going to help the situation.”

“The vaccinations are key. We’ve been saying that from the outset. We said it months ago,” she said.

“And that’s why we are really racing against time to get the vaccine rates up, whilst we’re dealing with the current outbreak.”

“And of course, we want to see those case numbers go down. But for us, the more important figure is getting those vaccination rates up and not going through the emotional rollercoaster every day.”

“Because once we get to 70 per cent, the Doherty report says you enter a period of transition. The Doherty report recommends that we don’t talk about cases but you focus on people in hospital and the vaccination rates which is what matters.”

“That’s what we’ll be doing according to the national plan that every single state has signed up to.”

Some experts say even getting to 70% fully vaccinated will not be enough to start getting back to normal, and that we need to keep case numbers down regardless.