Fly Me to the Goon.

Post Malone might not be the first name on your lips when it comes to discussing celebrity style icons. The notoriously grungy rapper/singer/songwriter is better known for his tapestry of elaborate tattoos as opposed to his dress sense.

But in recent years, he’s actually evolved into a rather snappy dresser. In particular, the 26-year-old Texan native has a real affinity (and knack for pulling off) rather Southern suiting looks, crafting his own brand of country-inspired cool.

Turns out he can also scrub up rather nicely in black tie when the time comes, too. Over the weekend, Posty (real name Austin Post) shared a photo of himself in a hotel lobby wearing a crisp Saint Laurent tuxedo, cigarette in hand and holding court. His confident pose and dapper look immediately brings to mind the legendary Frank Sinatra… 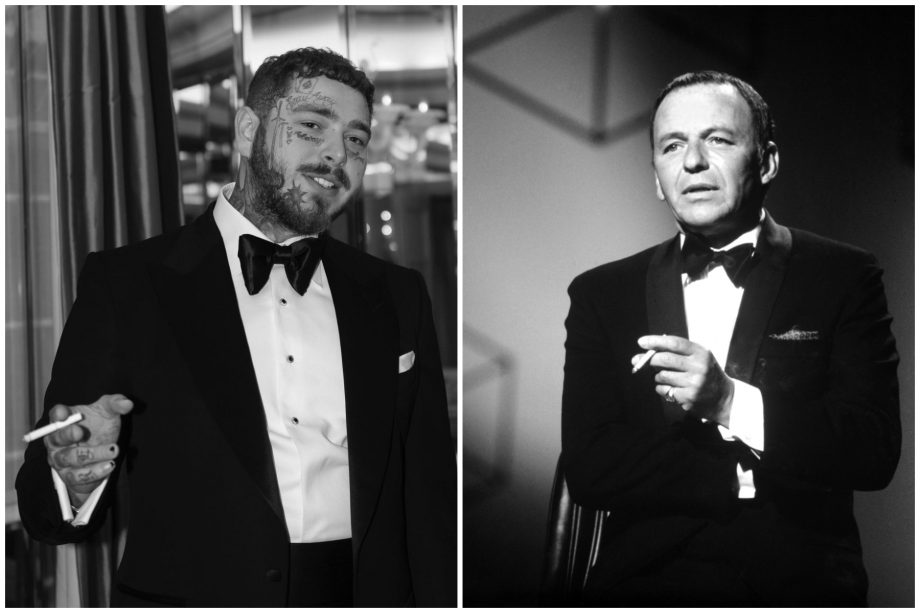 The similarities don’t stop there. Both Sinatra and Post are known for their boozy, hard-living lifestyles and love of a few cigarettes (jazz or otherwise…) Indeed, Sinatra was buried with a pack of Camels and a bottle of Jack Daniel’s. Hell, like Ol’ Blue Eyes, Post has… Well, blue eyes. But that’s about where the similarities end, other than the fact they’re both immensely successful musicians.

RELATED: The Best Tuxedo Brands For Men To Rock Black Tie Like A Young King

While we’re sure Post is no stranger to a bottle of Jack, these days he’s all about rosé, having launched his very own French rosé brand, Maison No. 9. That’s not his only pandemic side hustle, either: he’s also branched out into selling PPE and hand sanitiser as well as launching a number of collaborative Crocs models.

Yes, it’s been a wild year for the rapper. Not only has he whipped around a NASCAR track in a Rolls-Royce for a music video, but he’s also performed at the Grammies, as well as record a feature for DJ Khaled’s twelfth studio album alongside rising rap superstars DaBaby, Megan Thee Stallion and Lil Baby. He’s also got an album in the works that we’re likely to see this year, too.