Make no mistake, the Alfa Romeo Giulia Quadrifoglio is a stake in the sand for the Italian marque’s arrival as a real contender in the high performance luxury car market.

We flew to the car maker’s hometown of Milan to discover the long awaited four-door sedan from Alfa Romeo. Speaking to pundits and car lovers alike, you get a sense that this is Alfa’s time to shine; a time when it can go pound-for-pound with zee Germans and just maybe come out on top.

If the Italians can do anything right it’s create a great looking car and the Giulia Quadrifoglio is exactly that. A modern symbol of striking Italian design that’s aggressive in all the right places to let people know it means business on the road.

The Alfa Romeo Giulia is one hundred percent new from the ground up. A lot of this has to do with the fact that the car draws inspiration from Ferrari’s 458, even going as far as to hiring the brand’s chief engineer, Philippe Krief, to take charge of the top secret Giulia project back in 2013.

At the launch, Krief explained that building the Giulia was no easy feat.

“There’s a lot of things [to consider]. We define the exact way you should be seated in the car; the lower the better. Then we harmonise everything. The quick steering, the 50/50 weight distribution, the brakes, the engine.”

What we find most interesting is the fact that Alfa Romeo built the high-performance Giulia Quadrifoglio first, then expanded the range to its more affordable siblings. It’s an unconventional move but the final result is easily proven in the final performance figures.

The brand has also taken every possible step to create the perfect driving experience both inside and out. We spent some time with Klaus Busse, Vice President of Design at Alfa’s headquarters and the Giulia design team, where we discovered a sense of just how much thought went into this car’s development.

The new Giulia takes its lines from some of Alfa’s most classic cars like the original 1960’s Giulia, the stunning 33 Stradale and the always impressive 1900 C52 “Disco Volante” Coupé.

Then there’s the often forgotten rich motorsport history of Alfa Romeo touring cars, Formula 1 and hundreds of championship wins. Larini, Ascari and Fangio are just some of the biggest names who drove for the brand.

Naturally the expectations are high with fans and media but you get a sense that Alfa Romeo know they’ve got the Giulia right from the start. It’s still to be decided on whether this car will become an icon like its predecessors, but for now the Italian brand does have something that people are stepping up and taking notice of.

If curves could kill then consider the Giulia Quadrifoglio (QV) one deadly Italian. It’s beautiful, it’s angular, it’s aggressive, but most importantly it doesn’t feel like a carbon copy of the other mid-sized sedans in its class. It’s unique in all the right places with little touches which give it the ‘don’t mess with me, I’ll blow your doors off’ vibe. The very vibe you want to give off when dropping the kids off at school.

The QV features a front grill which wears the iconic Alfa Romeo ‘Tri-bolo’’ shield alongside a twin intake design which sucks in as much air as possible for the turbos. As mentioned, carbon fibre adorns the car with a boot lid spoiler and active front splitter working in tandem with a rear diffuser to keep the car planted at speed.

“The real challenge is the DNA. It’s important to give the feeling of Alfa Romeo and not just the picture of Alfa Romeo from the past for today.”

It also comes with side skirts and vented wheel arches to accommodate the wider wheel and optional carbon-ceramic brake package for the track fiends.

For real world driving necessities, there are fancy Xenon headlamps which comes standard and were developed by the technology boffins at Magneti Marelli. LED globes are also available as an optional extra.

Speaking to the Giulia designers at the Bolocco Proving Ground, it was revealed that the car wasn’t made to specifically spearhead Alfa Romeo’s future designs.

“Our heritage is important. For the future we always balance what we need. It’s not a copy of the past or a remake of a car. The real challenge is the DNA. It’s important to give the feeling of Alfa Romeo and not just the picture of Alfa Romeo from the past for today.”

The new Alfa Romeo Giulia quite simply feels fresh in the skin, but hides away small cues that still make it recognisable as an Alfa Romeo. The sculpted sides, the front fascia and a powerful stance all attribute to what designers say, “draws from history to capture the Italian emotion”. We’d just call it a fine balance of finesse and ferocity.

This will no doubt give local punters a greater idea of how much work went into this car as well as Alfa Romeo’s capabilities for delivering future special models.

An Interior Fit For An Italian

Alfa Romeo’s design team spent countless months developing various mood boards and territories to encapsulate the true essence of what the Giulia should be. They landed somewhere between ‘Ryan Gosling’ and ‘Justin O’Shea’.

Their interior design team have been fortunate to have an almost limitless selection of fabrics and materials from some of the country’s finest ateliers. Carbon fibre, wood, fabric, leather…the exotic list goes on.

The Quadrifoglio’s leather-clad carbon-fibre seats alone show the length the brand has gone to in creating a racing cockpit that’s as performance oriented as it is comfortable.

Ergonomics ensure drivers remain in total control even when at opposite lock going around a corner with an Orange Mocha Frappachino in hand. At the other end of the spectrum, an intuitive drive and entertainment control means changing between Beyonce and finding the nearest organic kale smoothy is almost effortless.

The Alfa Romeo Giulia Quadrifoglio resides at the pinnacle of technology. Having spent a day with their technology partner Magneti Marelli, you begin to understand just how much motorsport inspired technology goes into the new car.

For the uninitiated, Magneti Marelli is responsible for a lot of technology you see in Formula 1. Advancements like the KERS (Kinetic Energy Recovery System), Formula E engines and the MotoGP ECUs have all been graced by the Magneti Marelli name.

The navigation and entertainment system was also developed by Magneti Marelli and is nicely integrated into the car’s dash. The navigation system also proved to be exceptionally easy to use regardless of its understated design.

As you can imagine, trying to navigate the Italian country roads is no easy feat, but the car actually made things simpler. It was the toll booths which brought us unstuck in the end but that’s not the car’s fault.

On The Road To Glory

What can we say about the Alfa Romeo Giulia other than we were pleasantly surprised with the level of driver involvement.

The Giulia Quadrifoglio is one incredibly smooth drive which absorbs the bumps with ease but feels as solid as a rock whilst belting through the corners with poise and minimal body roll.

The gear shift is also smooth and enhanced with a top notch paddle system that powers an eight speed auto.

Three drive modes are available across the Giulia models which uses Alfa’s proprietary D.N.A system – a mode selector which offer drivers the ability to create a customised driving style experience according to conditions or desired car responsiveness. Fun fact: ‘Race’ mode is also available on the Quadrifoglio – this eventually lead me to a moment on the track at Bulocco which had me facing the wrong way.

Let’s get the details out of the way. The Giulia Quadrifoglio has a 375kW 2.9-litre twin-turbo V6 that propels even the slowest ginger from 0-100 in less than 4 seconds.

All of these figures wouldn’t mean much if there wasn’t a sufficient way to put the power down and that’s where the QV’s eight-speed automatic transmission comes into play, sending a tyre smoking 600Nm of torque to the rear wheels.

Giulia’s chief engineer Philippe Krief told us that the dual clutch option was intentionally left out in order to maintain a sporty yet comfortable ride for customers. He added that this move was also about capturing that all elusive emotion of driving.

“We wanted to make a car that is easy to drive. If it’s a performance car but not easy to drive, your emotion will transform in a bad way, especially in the wet.”

We couldn’t agree more. Passion, beauty and speed. Easily three of our favourite words. And now you can make Giulia our fourth.

To register for more information about the new Alfa Romeo Giulia click here. 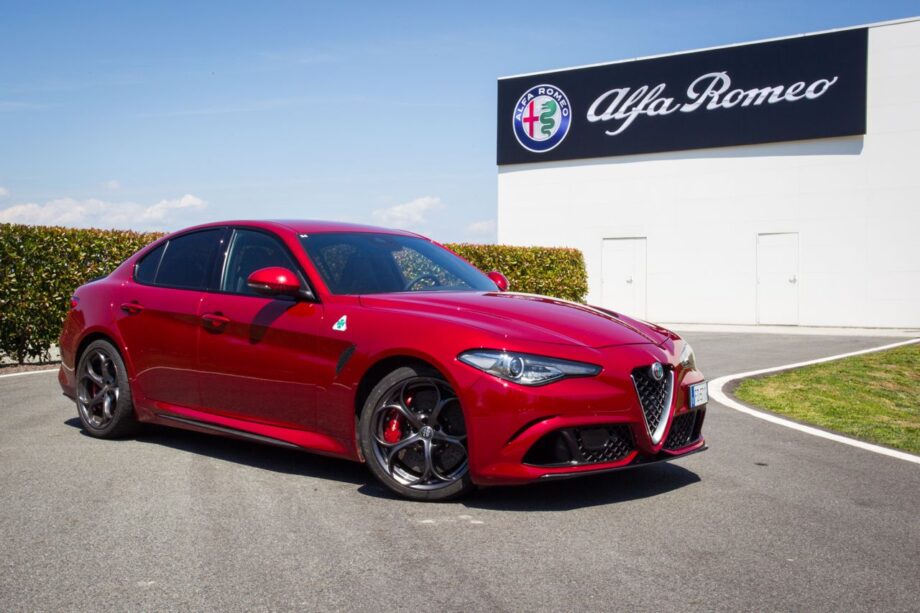 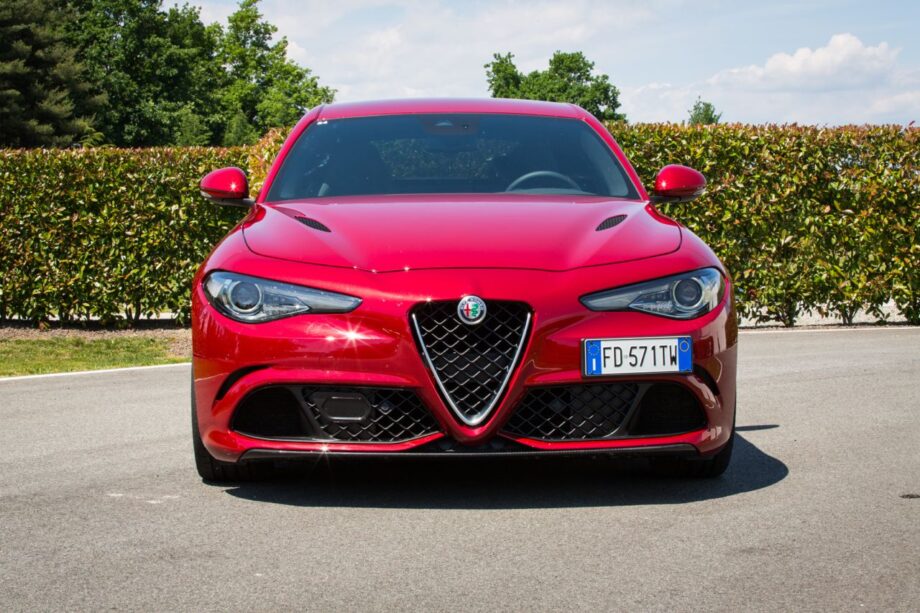 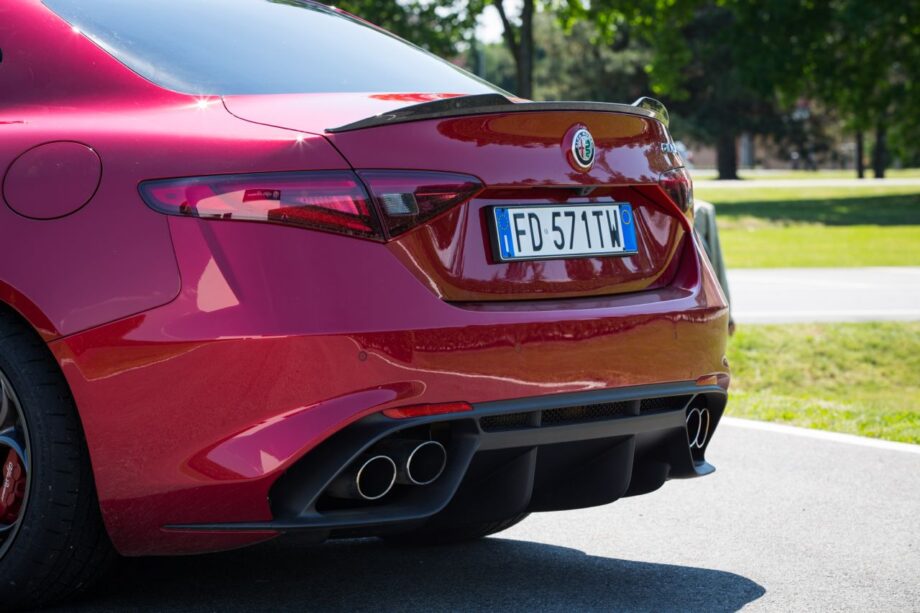 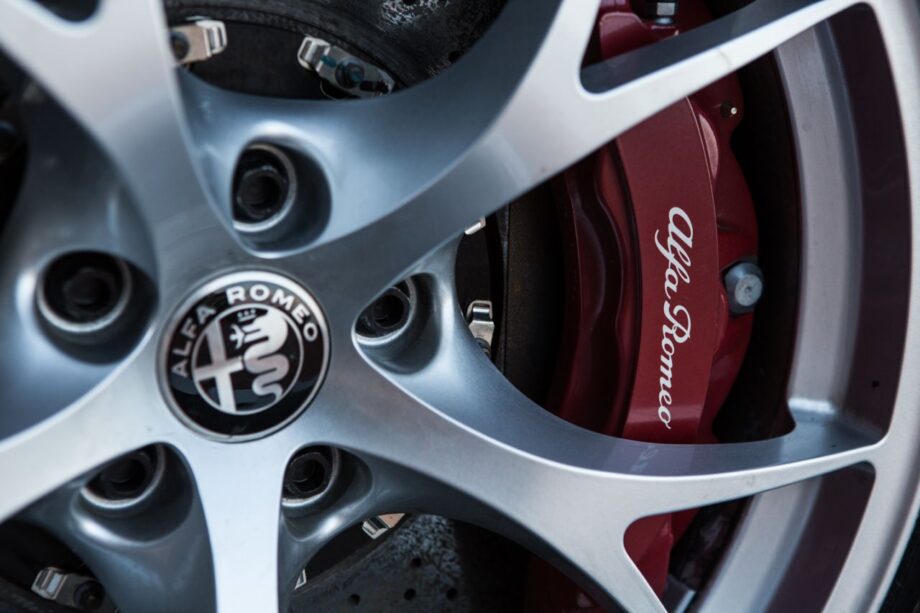 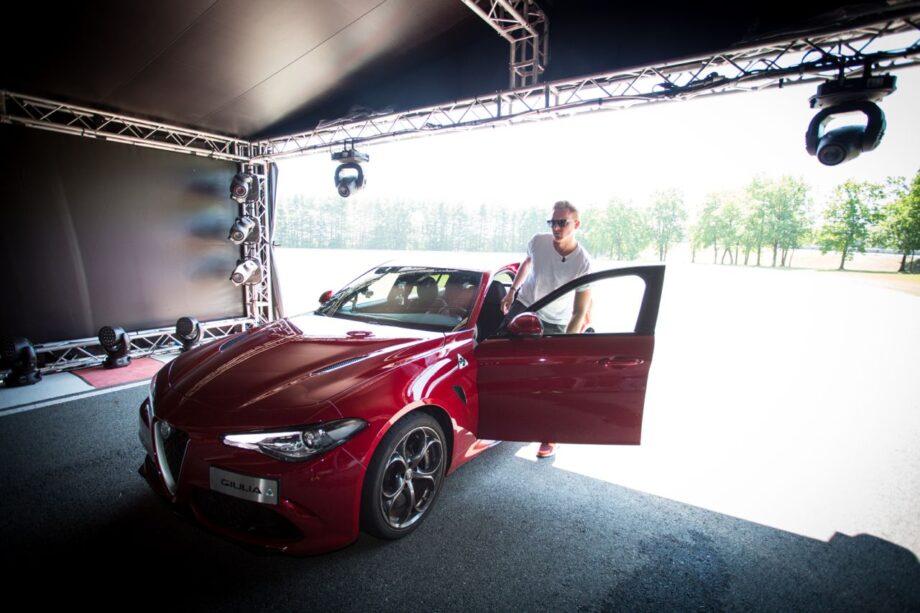 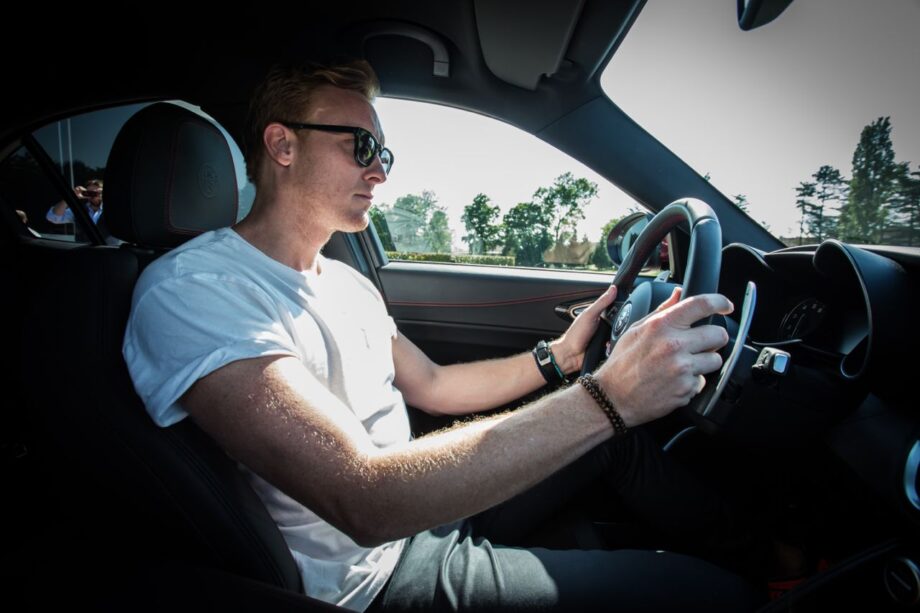 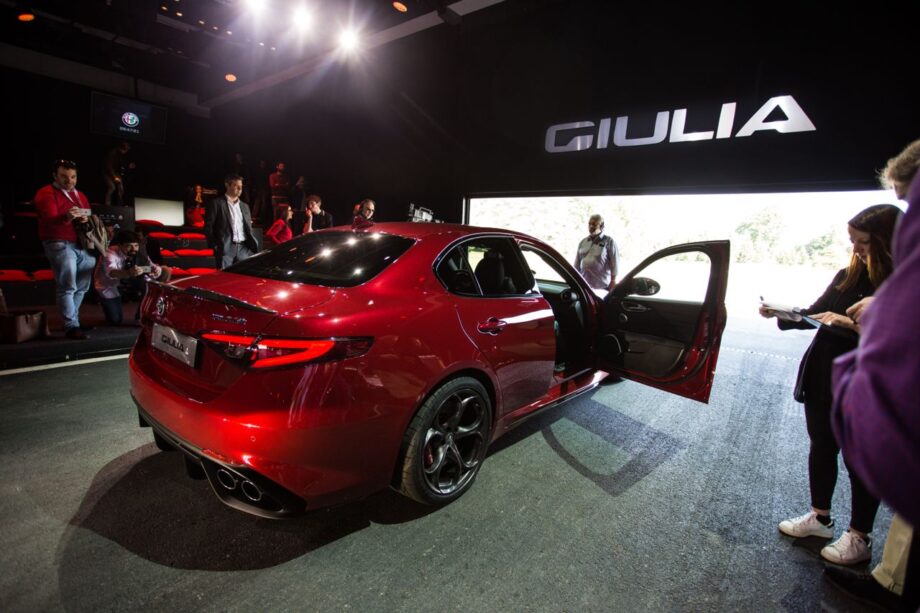 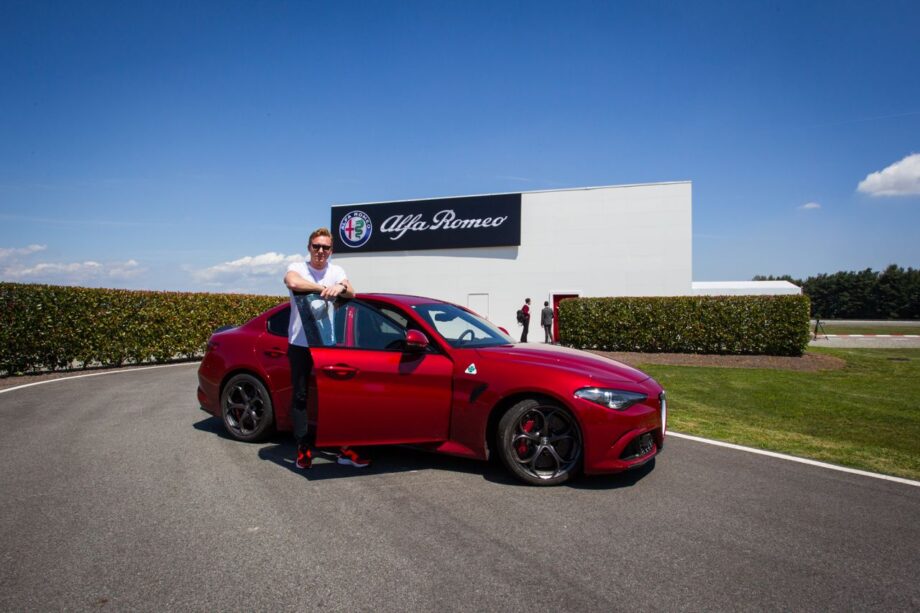