Well this is a welcome change. Whilst we don’t have our own legion of parasites just yet (i.e. kids), we do have many friends who harp on about what they love and hate in a family car.

Does the Alfa Romeo Stelvio, the Italian marque’s first ever SUV, make the cut in today’s hotly contested world of four-wheeled family smugglers?

We took the keys of a brand new Stelvio First Edition to find out. During a week we put the car through its paces in Sydney across overcast skies filled with heavy traffic and open roads.

Here’s what you need to know if you’re in the market for a premium SUV.

1. You can easily tell it’s an Alfa Romeo 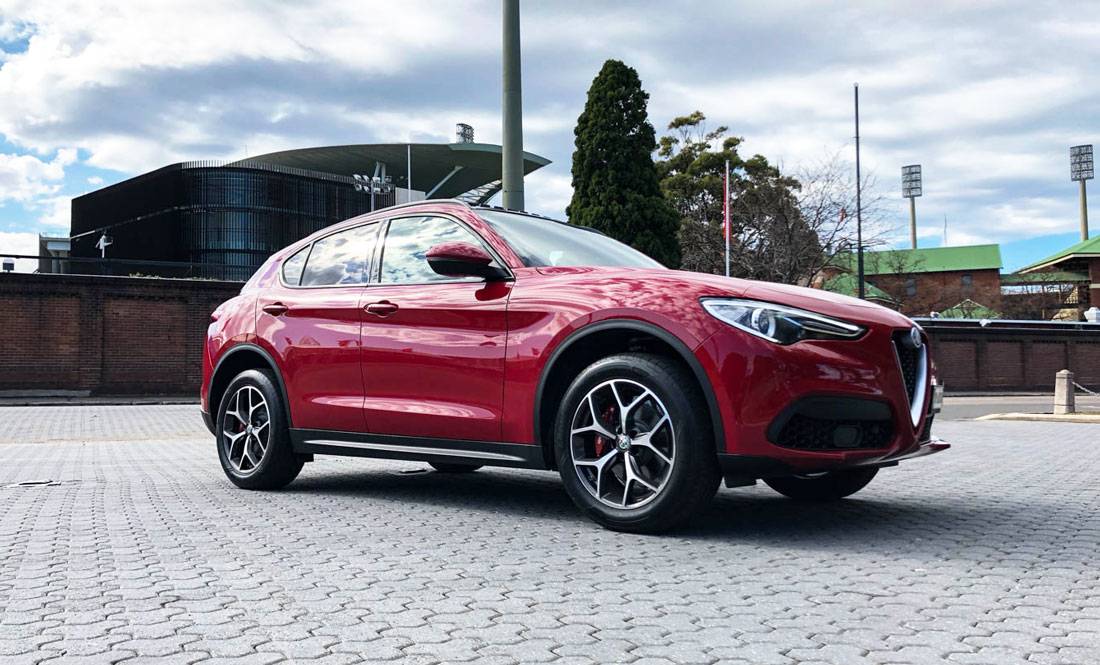 Alfa Romeos have a cult following so it’s good to see that in SUV form the car’s design is still essentially “Italian” with curvaceous Alfa Romeo lines and distinctive front fascia.

2. The sportier looks will cost you though

We do have to add that much of the car’s sporty appearance is enhanced by the 19-inch sport alloy wheels and red callipers – options that only come on the more expensive First Edition models. Brakes were a bit on the softer side for our liking but do the job fine for an SUV.

3. They’ll even see you coming at night 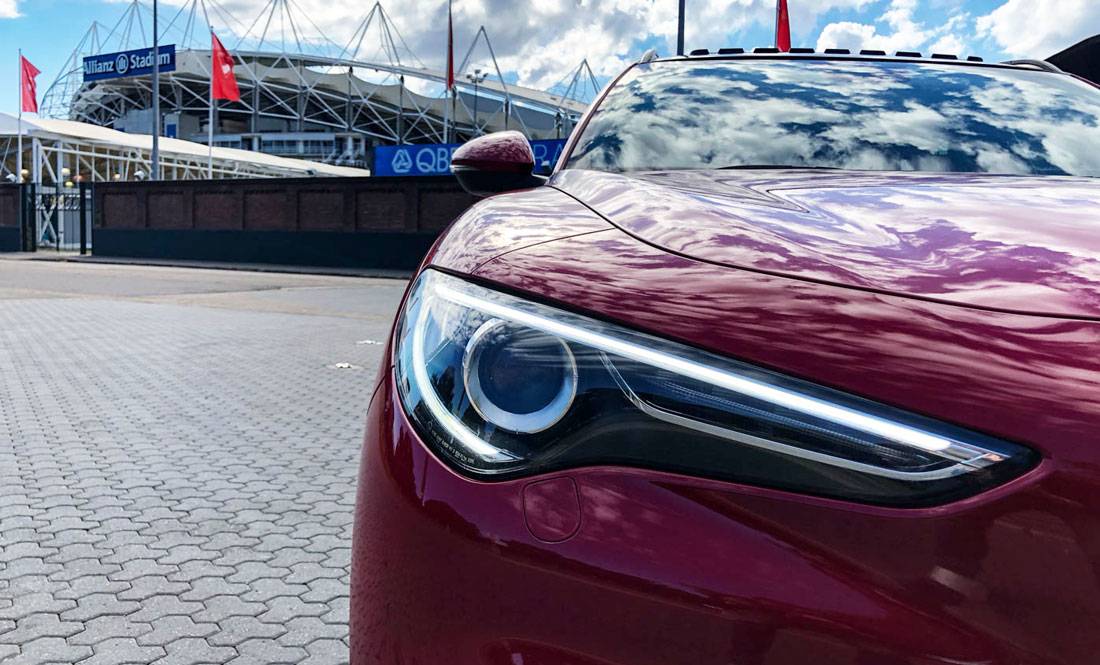 Needless to say, the Alfa styling is so strong in the Stelvio that it’ll even shine through at dusk

4. You get other cool stuff for the premium price tag 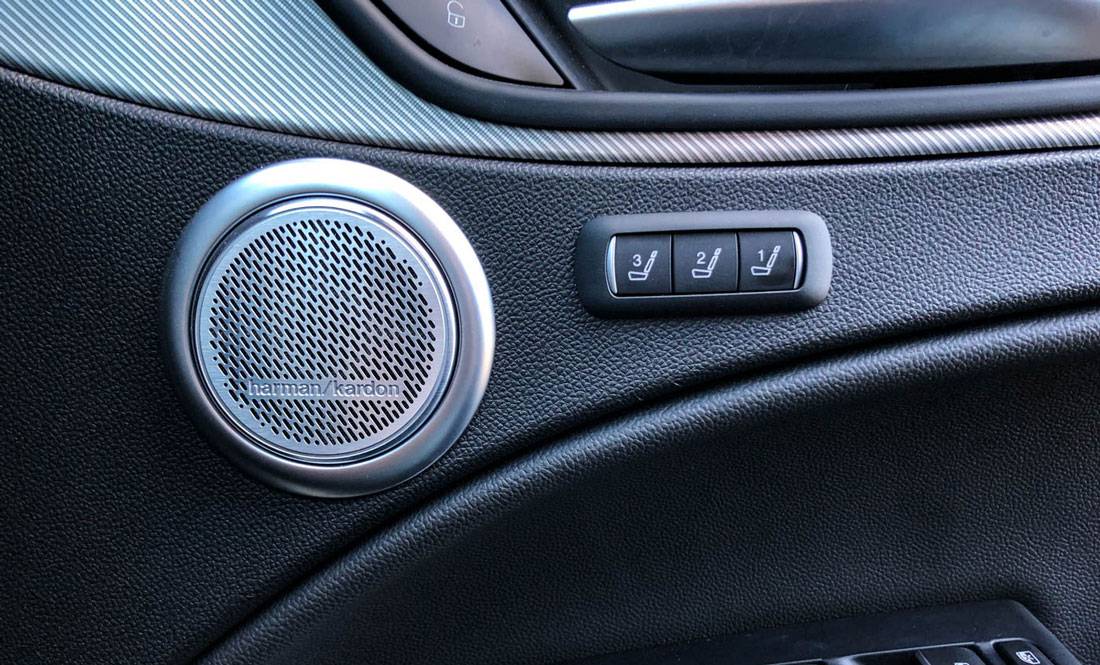 We never really understood the need for 14 speakers in a car but nonetheless the Stelvio packs it all in complements of Harman/Kardon. It wasn’t mind-blowing but did a decent job of drowning out our imaginary crying babies and the boss’ phone calls. 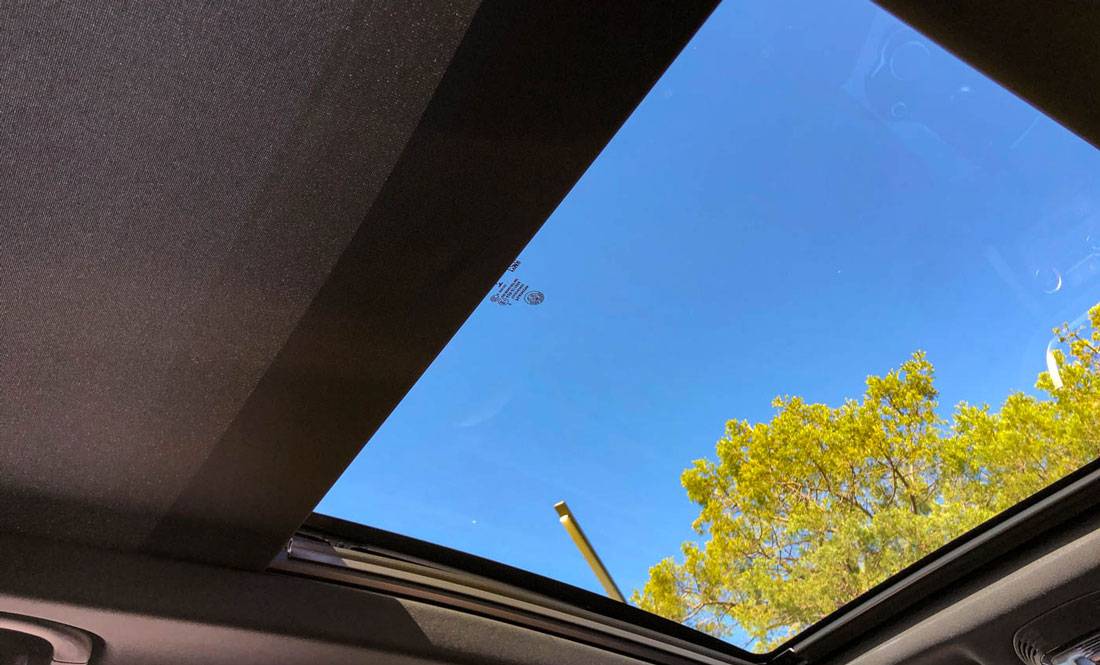 Other extras in the First Edition Stelvio include a cool panoramic sunroof and tinted rear windows.

From inside the cabin you can barely hear the cylinders firing away which is great for snoozing passengers. The downside? The smaller 148kW engine which makes 330Nm of torque does lack urgency off the line. The SUV builds speed gradually rather than quickly – we say gradually because we’ve been driving a succession of sports cars off the back of taking the Stelvio. 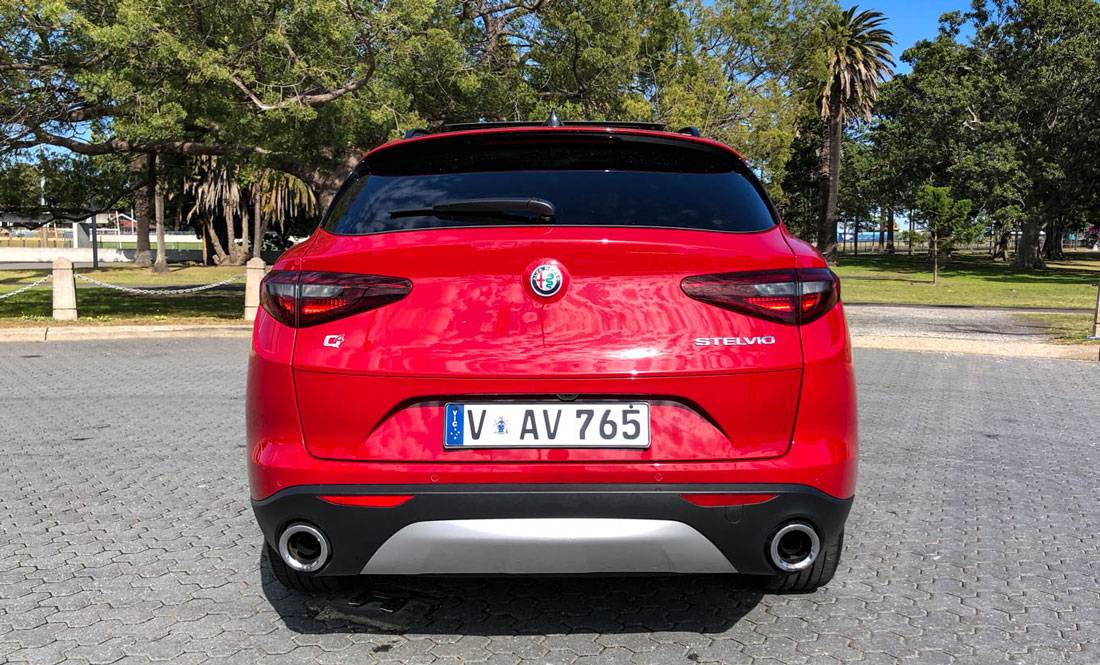 As a result of the lack of grunt off the line, the fuel efficiency of the Stelvio is insanely good. It averaged about 7L/100km for us with the start-stop system engaged. There’s also a strut brace in the engine bay to improve the car’s body rigidity and aid handling. 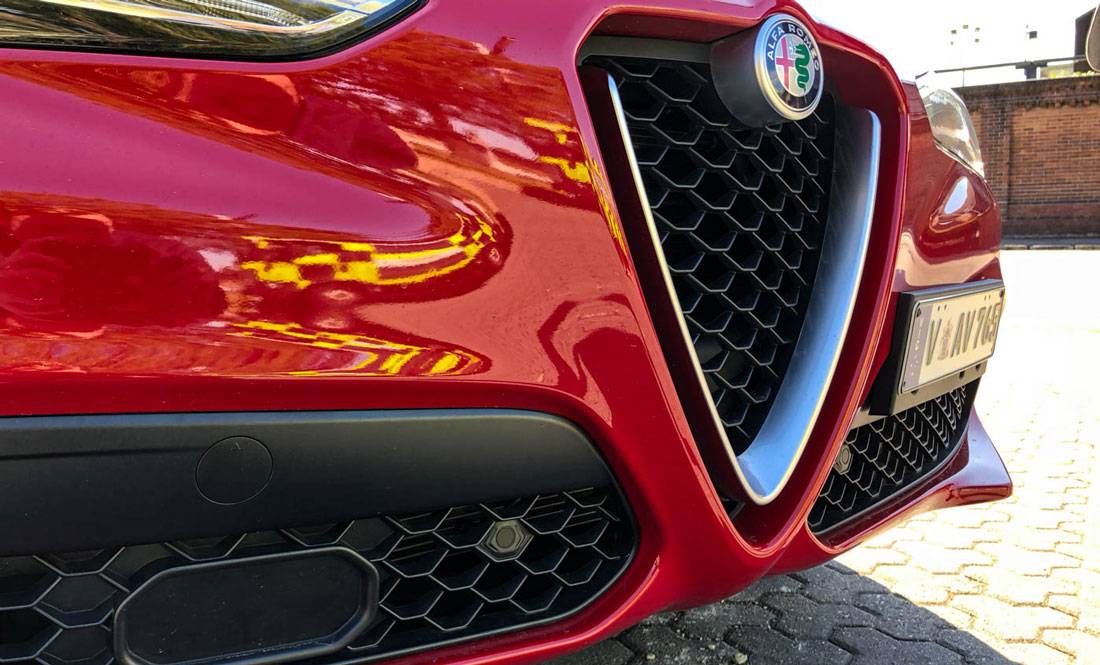 Autonomous-emergency braking, pedestrian detection, blind-spot monitoring, lane departure warning and parking sensors all round are helpful in heavy traffic or urban areas. The extra-cautious emergency braking system did startle us a few times though.

9. Space is a winner in the Stelvio 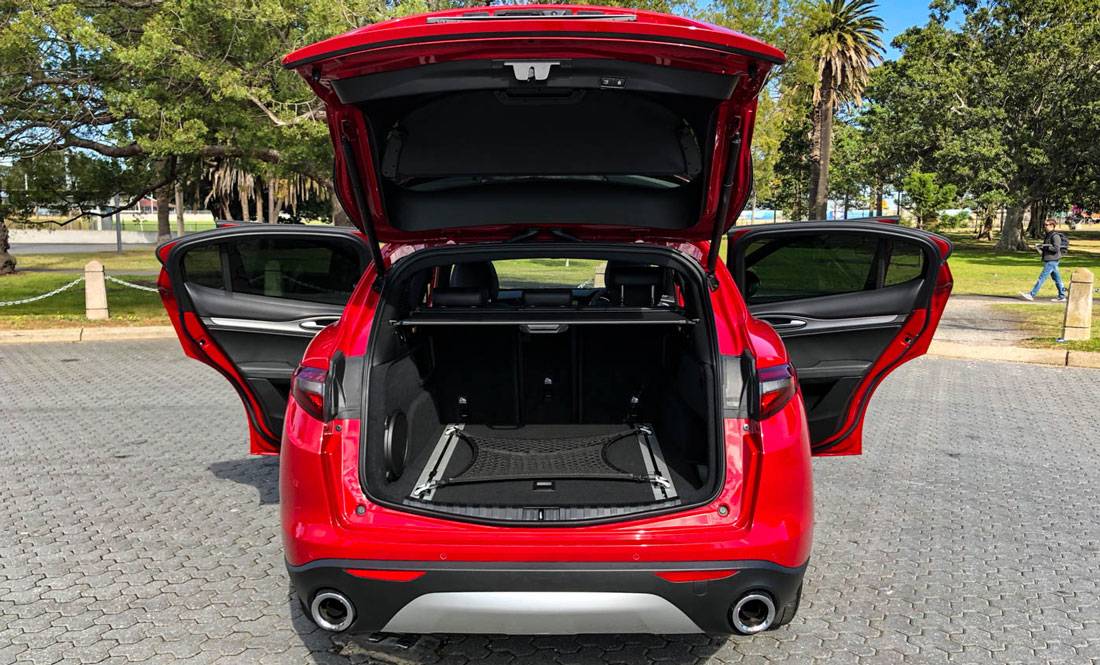 That’s 1,600 litres of load capacity with the rear seats folded flat for those playing at home – good for hauling bulky IKEA furniture or your ex’s junk on route to Vinnies. The rear boot is electric powered. 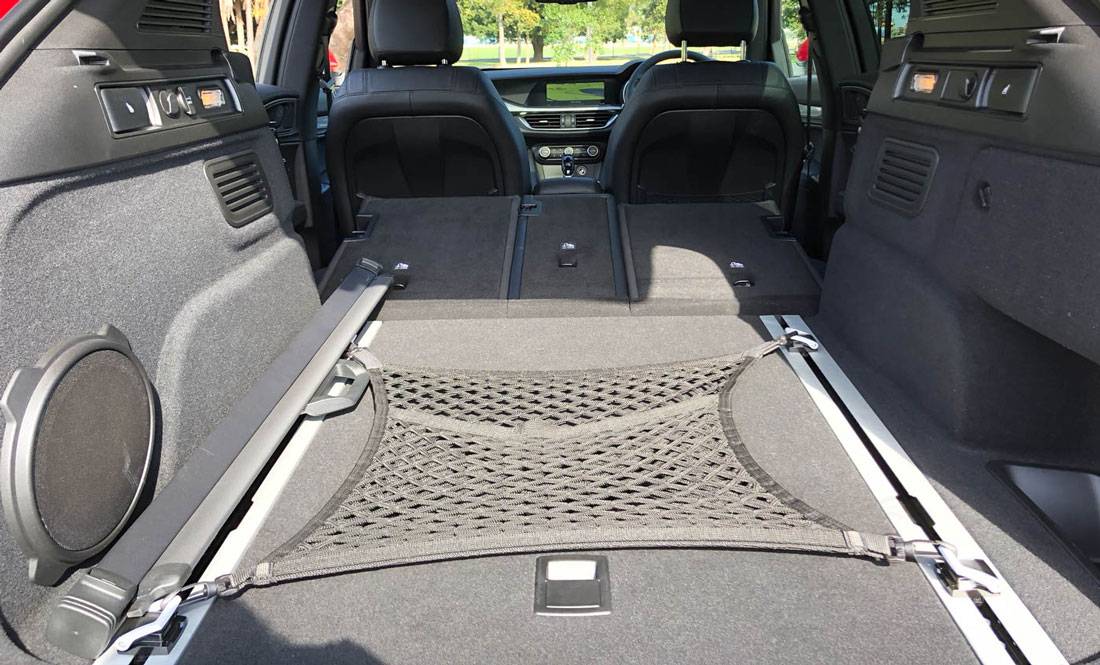 You can also hold down your melons with this handy cargo net included. Note: Melons not included. 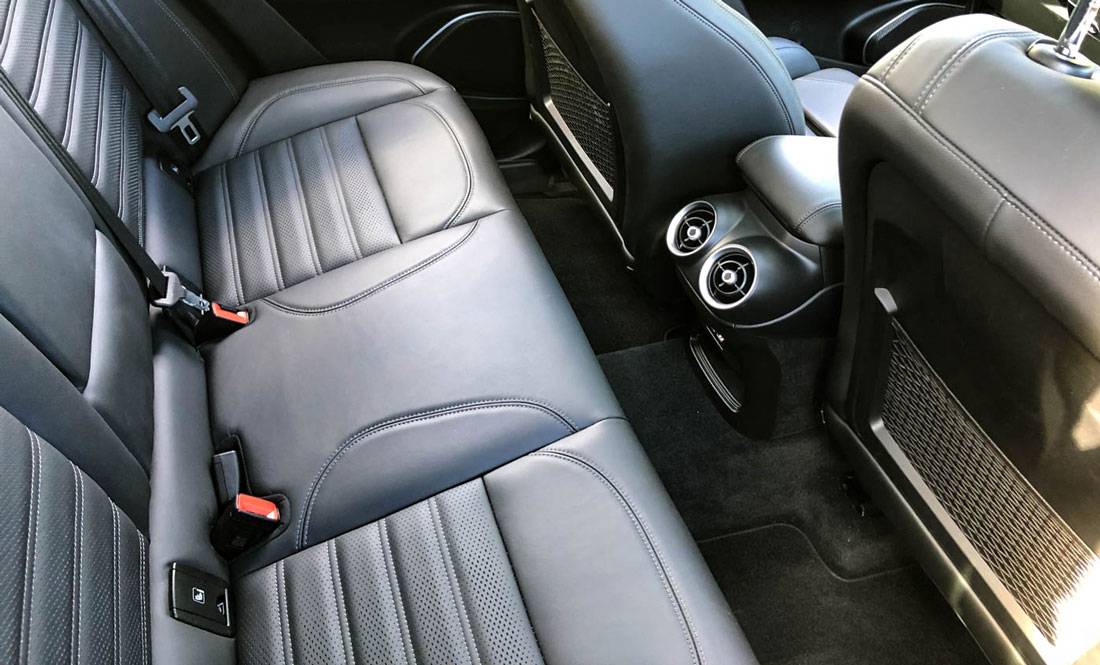 Whilst we can talk about how awesome the front seats are for days (they hug you like a proper sportscar), it’s also worth mentioning that the rear leather seats are just as plush and dare we say, easy to clean.

In true Italian fashion, the interior detailing is beautiful, clean and faultless. From the ambient interior lighting to the finely machined aluminium finishing…

13. To the highly intuitive infotainment interface 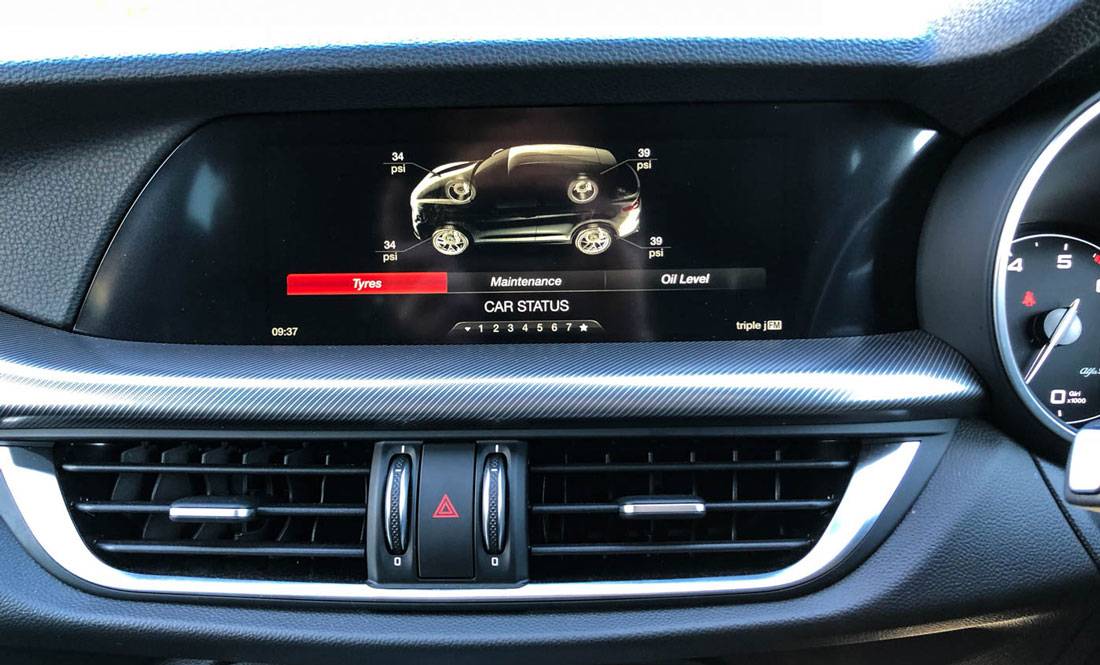 Which made a breeze of scrolling through everything from car settings to diagnostics to entertainment.

14. It can be more refined though… 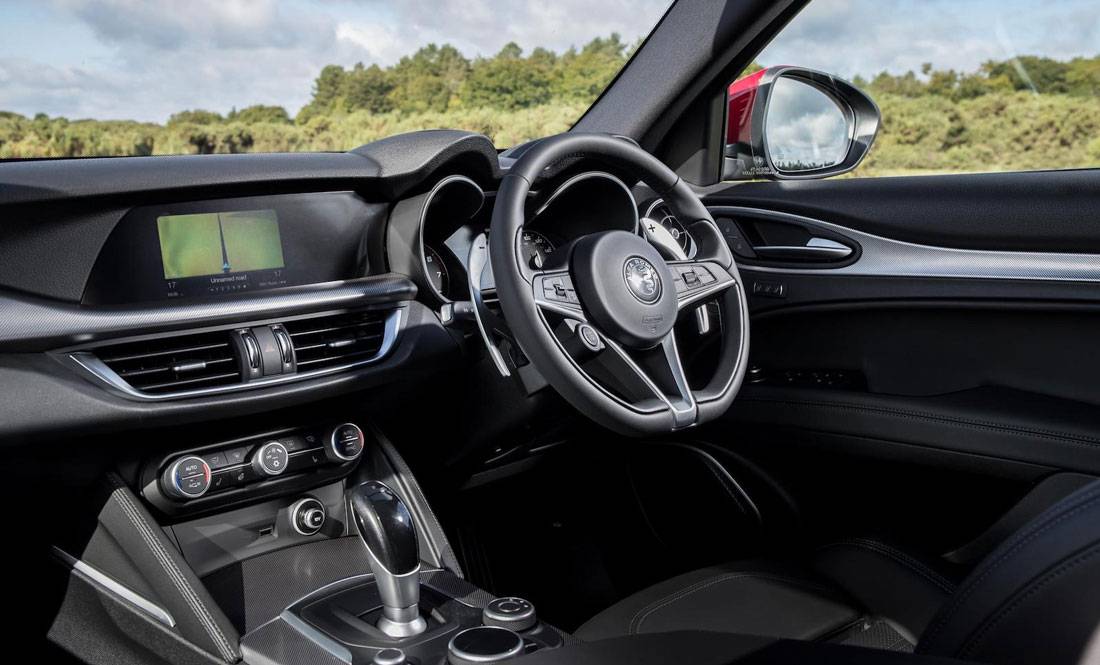 The indicator and wiper stalks are placed a bit far from the fingers which makes using them a bit of a stretch – this was confirmed by another trusty long-fingered chap.

15. There’s a slight ‘knock’ when reversing 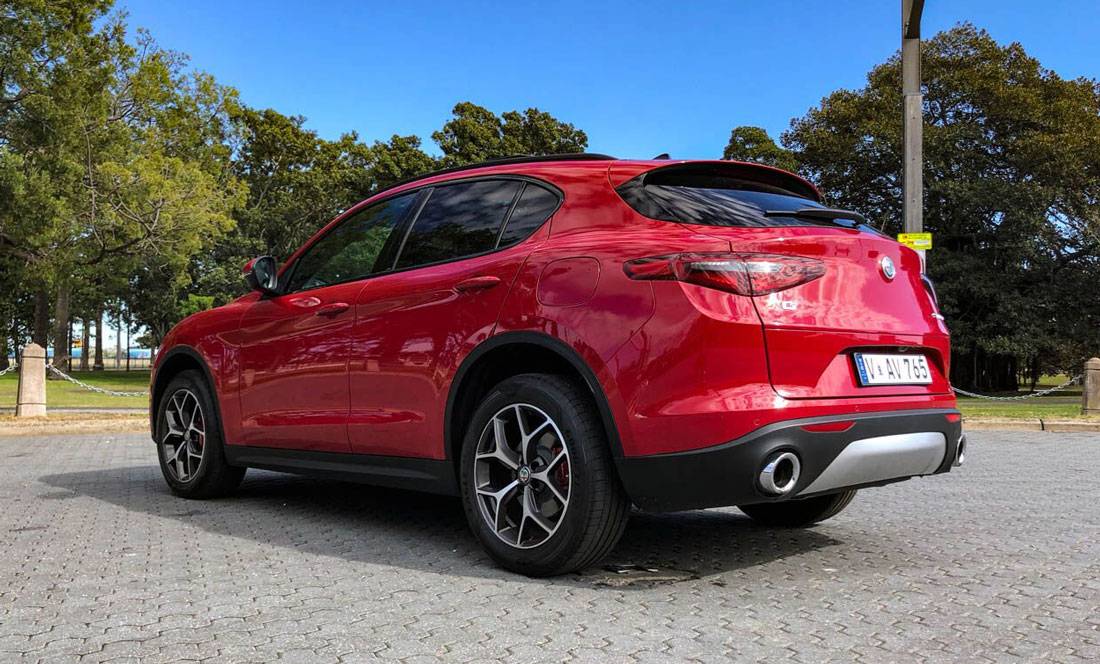 Turn the wheel full lock, reverse slowly and there’ll be a sudden single ‘knock’ noise from the gearbox or front axle. We’re not sure if this is just the gears engaging but it was rather off-putting and made us think we had swiped something whilst reversing. This happened twice whilst we drove the Stelvio.
Watch Next