American motivational speaker Les Brown once said, “the biggest obstacle you will ever have to overcome is your mind. If you can overcome that, you can overcome anything.” Even Bart Simpson once quoted his father as saying he could do anything if he just put his mind to it. Sneer at the messengers if you will, but they’re powerful messages that can be applied to many areas of life.

They’re especially relatable to health and fitness. Anyone looking to better themselves, whether it be losing weight or achieving a new personal best, the main ingredient we need is motivation. Without it, we’re pretty much doomed to fail. We could read all the motivational quotes and inspirational posters in the world, but unless you take the messages on board, they’re worthless. Which is why reading the stories of others in similar situations to yourself can be a greater source of inspiration.

Case in point: this 35-year-old father from Bundaberg, Queensland, who shed an astonishing 35kg in six months, resulting in a body transformation the likes of which should be all the proof you need that your mind is your greatest enemy.

Ben’s story reads like that of many others: junk food diet consisting of fatty foods, alcohol (half a carton every day) and a litre of ice cream every day too. He claims his childhood was relatively rough, and so was never taught the importance of sticking to a healthy, balanced diet. His lightbulb moment that made him realise he needed to do something about his ballooning belly was the fact he “couldn’t keep up with his two year old son”, The Daily Mail reports.

Realising that his excessive eating coupled with practically no exercise could mean his time on this planet could come to an end sooner than planned, he ditched the booze and takeaways, swapped them for healthier alternatives and began hitting the gym. 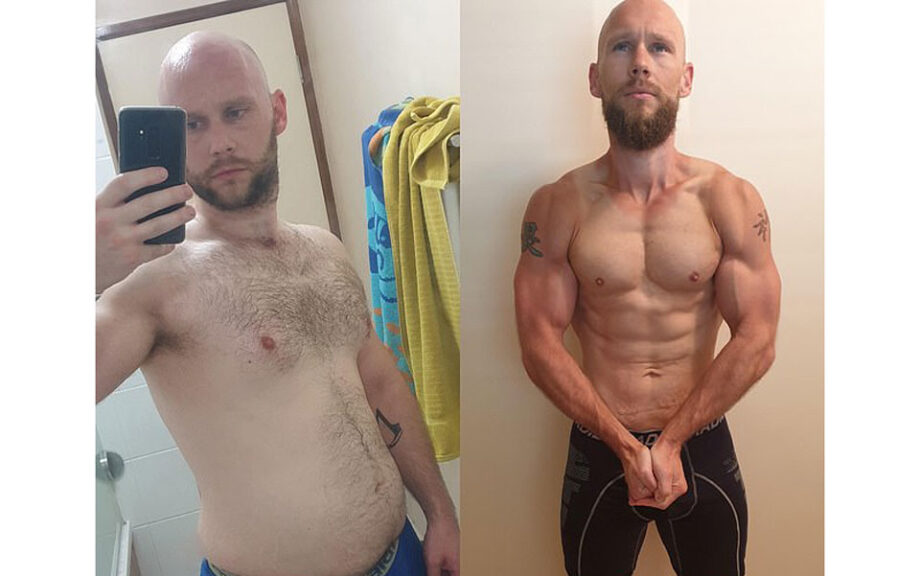 However, Ben adds that he didn’t need – or want – to stick to a strict diet. Instead, he simply researched various foods and each of their health benefits, and introduced them to his diet. He didn’t completely cut out junk food, for example, as he still had meals such as French toast, along with the occasional beer and his favourite ice cream.

“I began researching food and how certain foods benefit the body, particularly when you eat healthy,”

“I started walking every day, cut out the beer, ice cream and reduced the amount of takeaway I was getting. I learnt how to monitor my calorie intake.”

As we’ve seen before, cutting out “junk foods” entirely from your diet doesn’t necessarily equal a drop in weight. In fact, as long as you put yourself in a moderate calorie surplus (a little over your maintenance level which would sustain your current weight) and then cut out high-calorie foods for just 2-3 months to shed body fat, you will notice far greater results. Dieting this way, in combination with hitting the gym, will allow you to gain muscle – which has been said to be crucial for losing body fat – will allow you improve your overall body composition.

This was something Ben noticed himself, “I did struggle a bit at first – definitely coming to the realisation that I had to have balance, rather than a crash diet,”

“I don’t follow the fad diets out there, I believe it’s all about balance,”

DMARGE reached out to former NRL player and founder of Flow Athletic, Ben Lucas, to ask if Ben’s story really is one that can inspire others, or if he’s just one of the fortunate ones.

Ben Lucas tells us “it is possible to lose that much weight in 6 months, but it does also come down to genetics if you are going to do it in a healthy, sustainable way. The fact he even saw bread as the enemy suggests to me that he took it very seriously in terms of cutting things out of his diet.”

“Unless you are gluten intolerant, a little bread is fine and you want to be mindful of crash dieting, as if your diet is not sustainable, you are likely to put the weight back on.”

“The factors that may have made it quicker for Ben to lose those kilos is that he was eating a significant amount of bad food and cut all that out. He also had a good amount of weight to lose. Generally, when you have less weight to lose it can seem like it is taking a while to achieve.”

In Ben’s case, even though he said he cut out a lot of bad foods, he still treated himself occasionally – something The Rock, for example, proves can be useful with the use of cheat days – but for the average Joe, we wanted to know if still treating yourself occasionally should be encouraged.

Ben Lucas told us, “it is, but when you are starting out you need to build your healthy habits to ensure you eat your favourites only in moderation. Especially if you eat a high sugar diet, it can take 3-4 weeks to reduce those cravings, so I would suggest cutting that out all together until you get the cravings under control, and maybe find a healthier alternative to sustain you in the meantime.”

There’s no denying Ben’s new shredded figure is something to be admired, however The Daily Mail article only touches on what else he did in tandem with dieting to achieve it. We asked Ben Lucas what sort of exercise one would need to undertake to achieve similar results.

“It really depends on your body type, but your diet is most of the battle, followed by exercise and sleep. To lose weight, generally you would do a mix of cardio and weights, as weight training can burn fat for up to 38 hours post workout.”

“You also want to get your cortisol under control, as high cortisol (produced when you are excessively stressed) can hold onto weight. So make sure you are sleeping, if you have a stressful job consider meditating too and get that rest and recovery in.”

If you feel you’re in a similar position to Ben’s starting point, i.e. overweight and not sure how to cut out foods or begin exercising, Ben Lucas provided some tips for beginners to get their journey started.