Tokyo is the capital of contrasts. On one hand, it’s a mesmerising metropolis, a manic assult on the senses, a mélange of anime, cosplay, neon lights, Lolita girls and more raw fish than you could eat in a lifetime.

On the other hand, it’s a city deeply steeped in tradition. In the shadows of Tokyo’s glittering skyscrapers and mammoth screens are meandering alleys, microscopic shanty bars and ancient temples wreathed in incense.

This is the city other cities dream of being. A city turned up to 11. A city straight out of Blade Runner or The Fifth Element – eccentric, electric, bewildering, beguiling. Tokyo pushes the boundaries of what’s possible in urban living, simultaneously stretching towards the future and anchored firmly in the past.

It’s not a place you can visit once. Japan’s sprawling capital feels like multiple cities stuck together, each with its own architecture and atmosphere. You could spend a weekend in every neighbourhood and still not see it all.

But let’s say a weekend is all you have. To attempt to experience everything Tokyo has to offer in 48 hours is a fool’s errand, but thoughtful planning can give you an exhilarating overview. Decide ahead of time what kind of trip you want and use the D’Marge guide to Tokyo to determine the must-dos, must-sees and must-eats. You’ll be planning your next visit before the first has even finished.

The first thing you notice about Tokyo is its size. For a first-time visitor, the immensity of the city is both terrifying and exhilarating. You could while away lifetimes exploring the secrets of its cramped corners and antiquated alleyways, searching for the perfect ramen spot or the locals’ bar that’s untouched by tourists.

But seeing as this is your first time in Tokyo – and you probably feel like a very small fish in a very big, very bright ocean – you probably want to cross the classics off your to-do list. The Tokyo Skytree and Tokyo Tower are the two tallest structures in the country, as well as two of its most recognizable symbols. For a slightly less trafficked view, visiting the free observation decks of the imposing Tokyo Metropolitan Government Building.

For a glimpse of Tokyo in its bustling, modern incarnation, a scramble across the famous Shibuya Crossing can’t be missed. Stop in at the Starbucks overlooking the intersection for a prime view of the action below. At the other end of the spectrum is Tokyo’s historic side, which is magnificently illustrated in the Imperial Palace (tours are conducted by reservation only) and the idyllic Meiji Shrine.

Japan is a foodie’s paradise. Gourmands don’t come here for 12-page menus that inexplicably include include cuisine from every continent. Japanese restaurants tend to do one thing – and because they concentrate all of their efforts on it, they do it exceedingly well. There’s a reason Tokyo is home to more Michelin stars than any other city in the world.

Tokyo’s best eats aren’t all found in restaurants. Head to the basement of the Isetan department store for a foodie fantasyland that will leave no tastebud untickled. For dessert, try one of Tokyo’s bountiful bakeries. Kimuraya, located in Ginza, is the birthplace of traditional Japanese sweet roll anpan. Don’t overlook the convenience stores – the fare found in Lawson or 7-Eleven blows other country’s convenience stores out of the water.

For The Fashion Plate

From crazy clothing to cutting-edge electronics, Tokyo sets trends for the rest of the country – and perhaps the rest of the world. The shopping is prolific and feverish. While some neighborhoods cater to the eleganant and refined, others embrace the bizarre, the trendy and the teenage. Like Japan itself, shopping in Tokyo will both delight and confuse.

Harajuku is home to some of the city’s most iconic shopping. Walk down Takeshita Dori for a blinding snapshot of Tokyo’s youth culture. It’s bright, brash and unapologetically in-your-face – though you may not be tempted to buy, the spectacle alone makes it worth a visit. Stop in at RRL & Co afterwards for a mindblowing selection of dapper menswear from across the ages.

South of Takeshita Dori is Omotesando, a tree-lined avenue full of brand name shops that’s sometimes referred to as Tokyo’s Champs-Elysees. For shopping at its most glamorous, make your way to Ginza. The prestigious district is dominated by luxury department stores and high-end boutiques. Quirkier purchases can be found in Akihabara, the cultural hub of Tokyo’s flourishing nerd culture.

For The Culture Vulture

Arriving in Tokyo can feel like landing on another planet. It’s easy to be overwhelmed by the complete brainblast of culture shock that lurks outside your hotel door. If you’re not ready to dive into maid cafes, love hotels and crowded izakayas, there are more high-brow pleasures to be had.

The Tokyo National Museum is a vast complex housing the world’s largest collection of Japanese art. Amongst its treasures are ancient pottery, Buddhist sculptures, samurai swords, kimonos and colourful woodblock prints. A more modern museum experience awaits at the Ghibli Museum, a spectacular tribute to the animated films of Hayao Miyazaki.

For an up-close-and-personal peek at some of Japan’s oldest traidtions, take in a traditional kabuki performance at Kabuki-za. Visitors can also partake in the time-honoured ritual of a tea ceremony. A variety of options are available, often in upscale hotels or picturesque public parks.

We couldn’t end a guide to Tokyo without acknowledging – and embracing – the city’s strange side. Tokyo does weird like nobody else. The Japanese capital flies its freak flag proudly, and most would agree they wouldn’t want it any other way.

On the family-friendly side of things are the karaoke spots and the animal cafes, where visitors can spend time with cats, rabbits, goats, dogs and even owls. Take a trip to Yoyogi Park on the weekend and you may encounter the weekly gathering of Tokyo’s kooky dancing Rockabilly gang.

Want to get weirder? There’s M’s, the seven-floor sex goods shop near Akihabara Station that’s guaranteed to destroy whatever innocence you have left. But for the weirdest of the weird, you’ll have to go underground. Word on the street is there’s a maid cafe dedicated specifically to drinking breast milk – directly from the source – but the only way to find places that subversive is to be invited by a regular.

Finally, round out your visit with a trip to the Robot Restaurant. Skip the terrible food and take in the show – an extraordinary, and completely inexplicable, cataclysm of flashing lights, mock battles, glowsticks, scantily clad women, taiko drums, techno music, dinosaurs, samurais and, of course, enormous robots. It’s over-the-top Tokyo at its finest, a spectacle that can’t be explained in words as well as it can in letters: WTF. 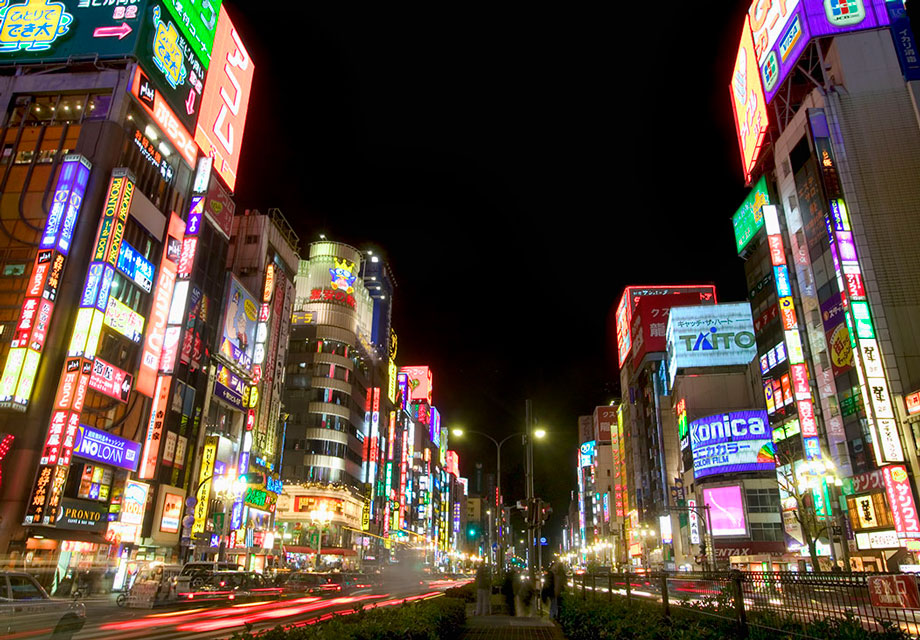 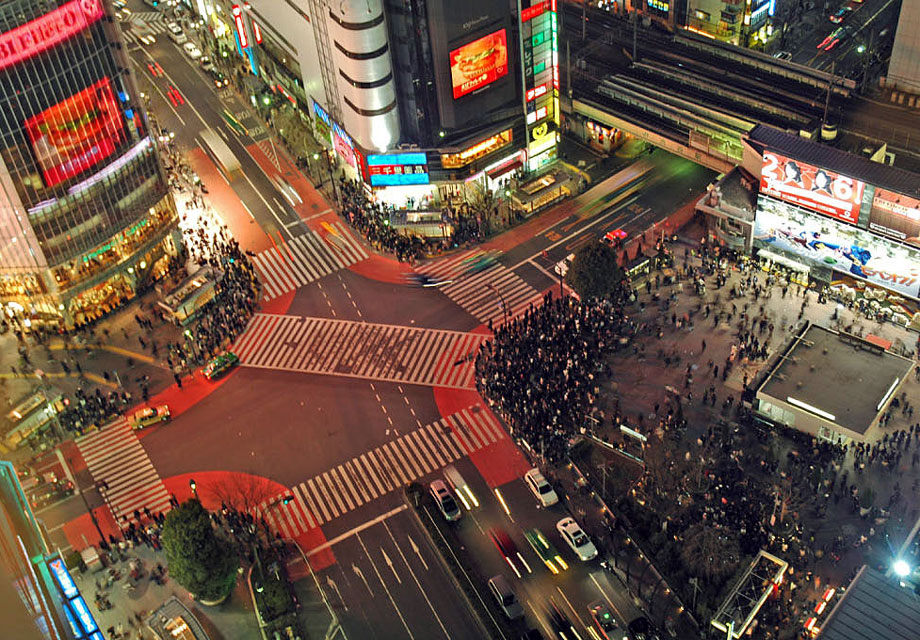 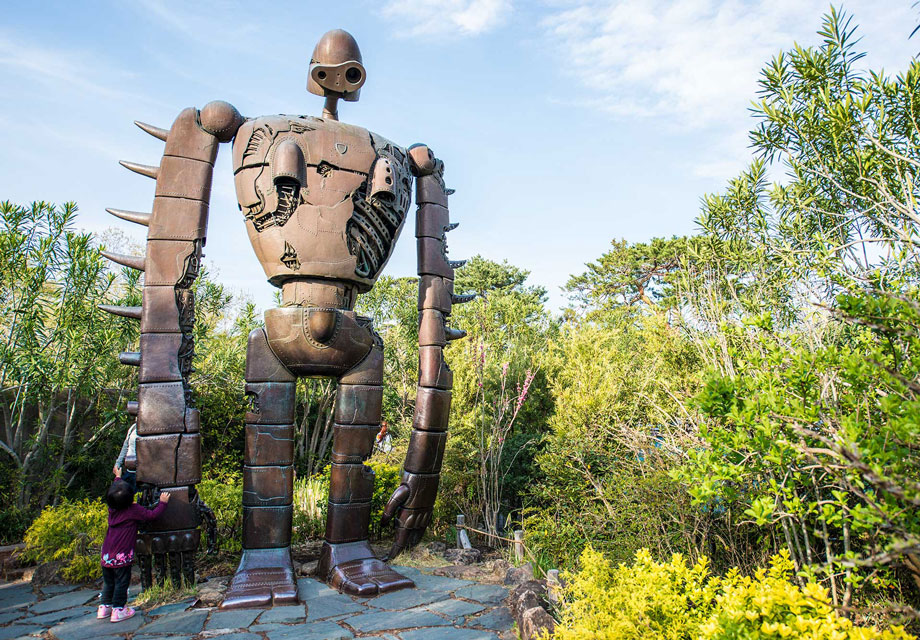 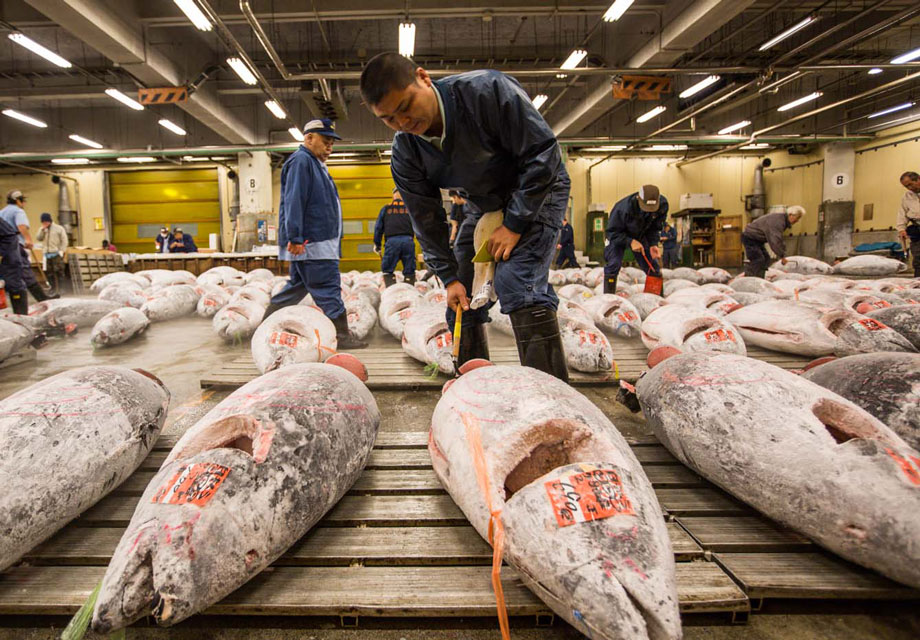 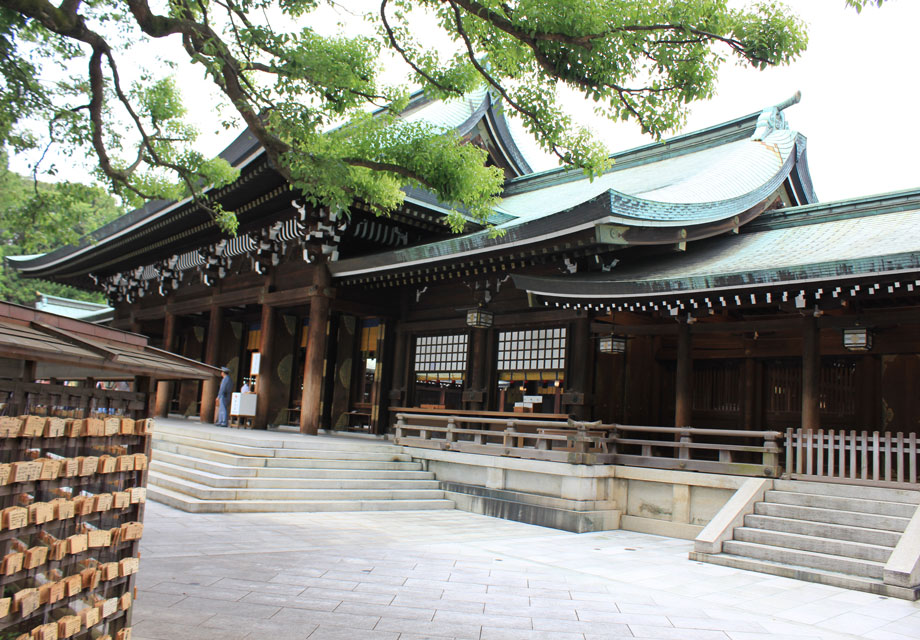 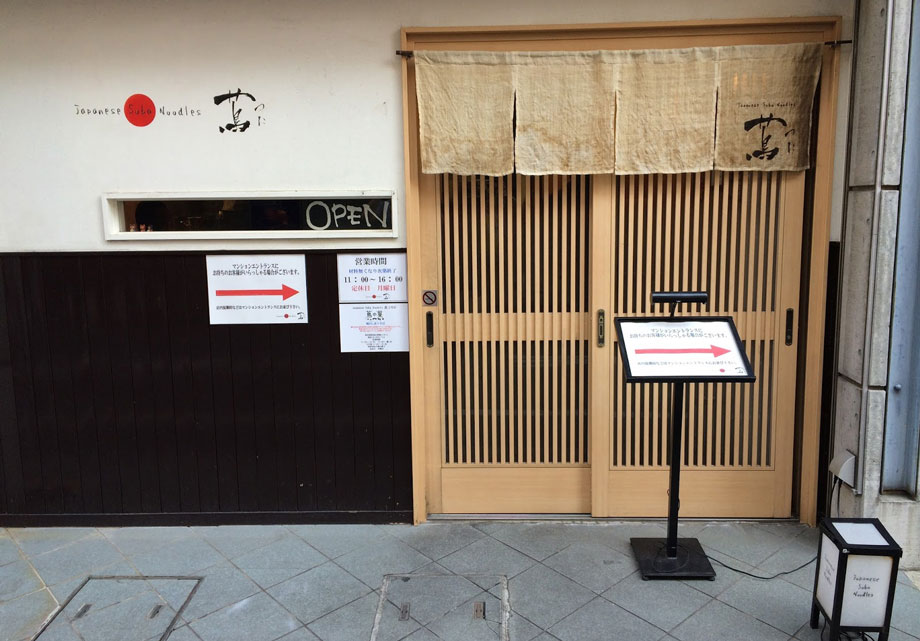 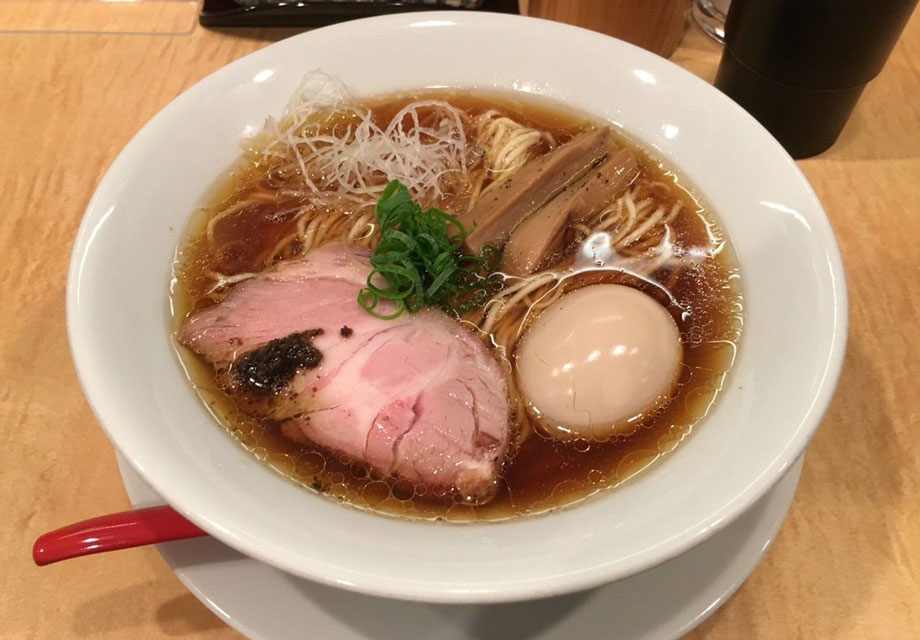 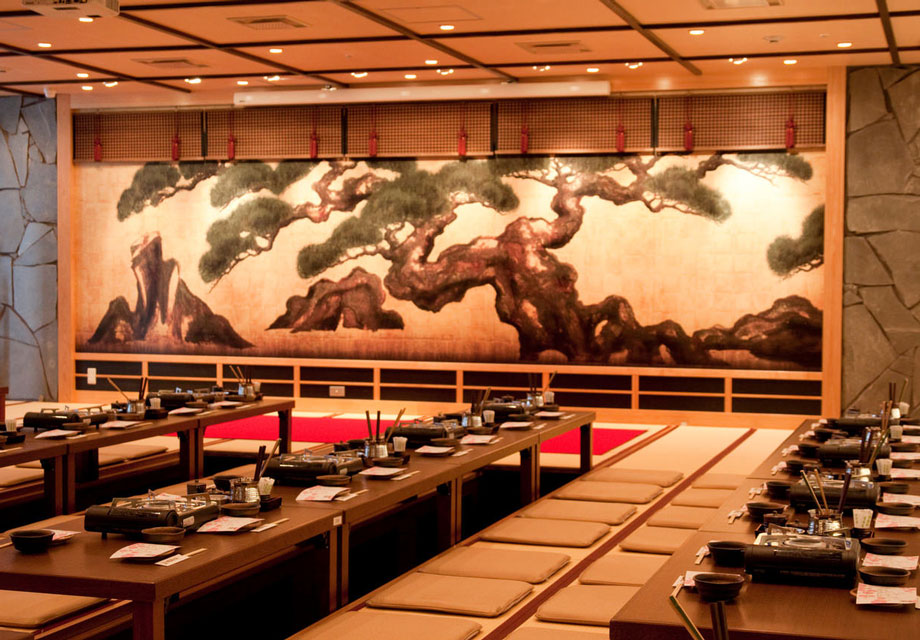 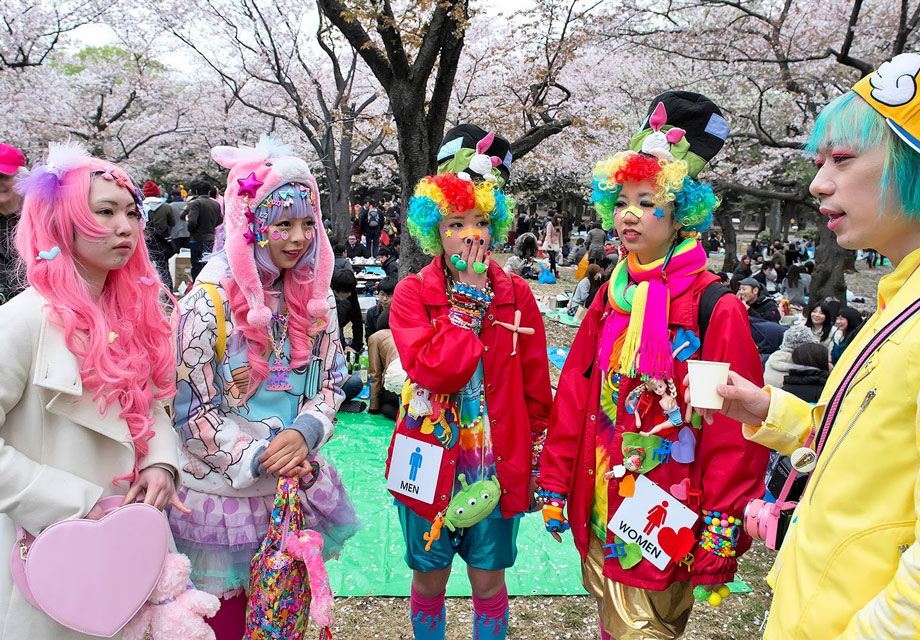 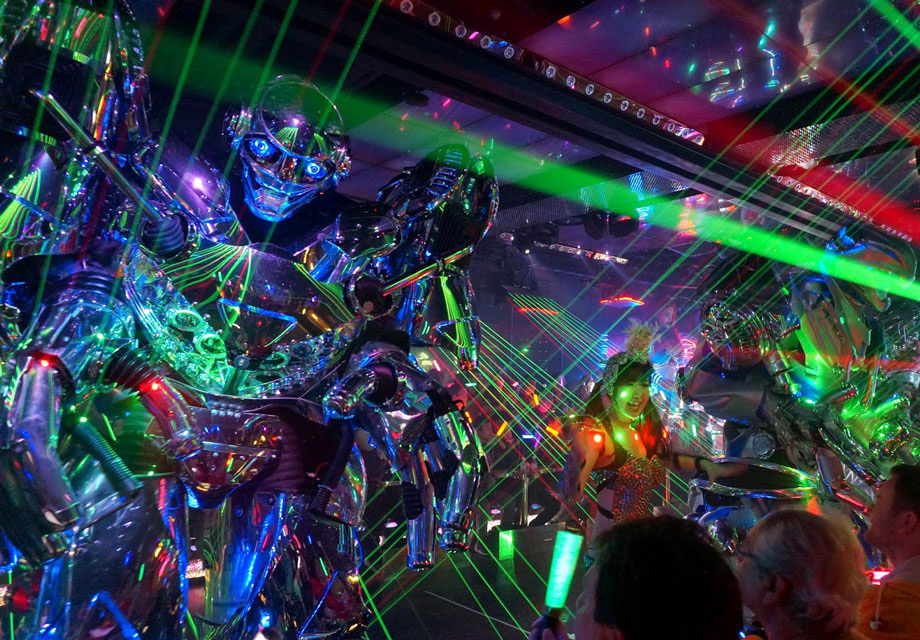 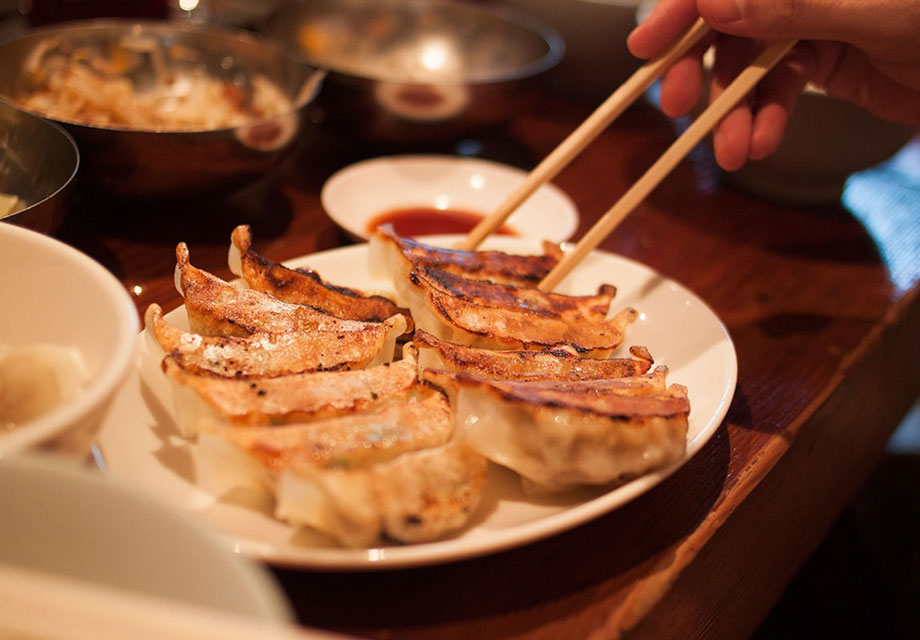 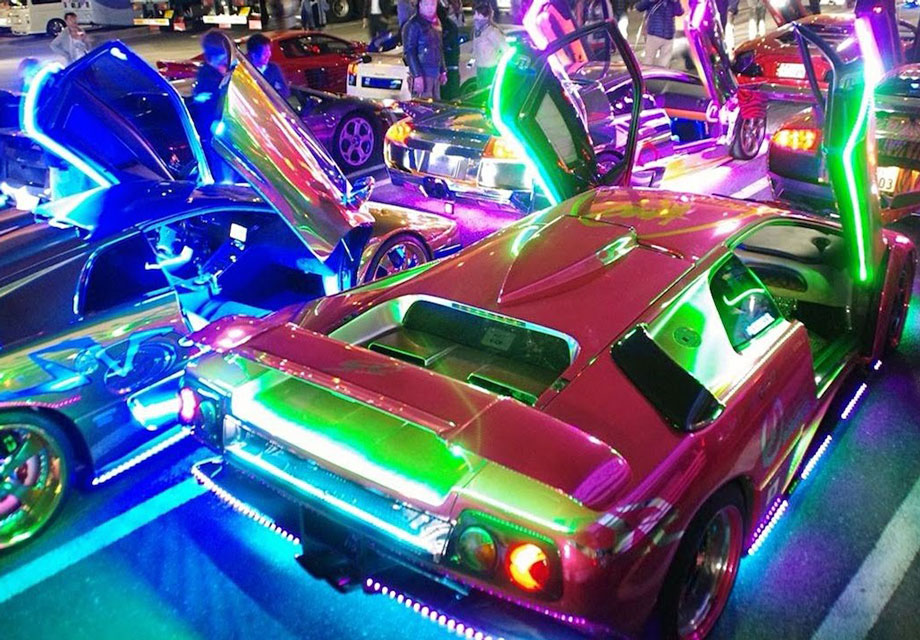