Think Bell & Ross and you’ll likely conjure up an image of one of the company’s instrument-inspired square-dial timepieces. You may be forgiven for forgetting the brand also produces a small range of circular-dial timepieces that fall under its Vintage umbrella.

Within the Vintage lineup are BR V1, BR V2 and BR V3 models, and the latter has now received a fresh colour update, bringing it in line with its siblings. That’s because the BR V3-94 can now be had in Black Steel, a colour finish currently available on the two other Vintage series of watches, but one that certainly makes the V3-94 a lot more appealing to the general consumer.

Before the introduction of Black Steel, the only colourway available directly from Bell & Ross was the R.S.19, a collaboration with Renault Sport (a long-term collaborative partner) – a new R.S.20 model has also been introduced alongside the Black Steel. So, what does the BR V3-94 Black Steel offer over its BR V2-94 Black Steel counterpart? 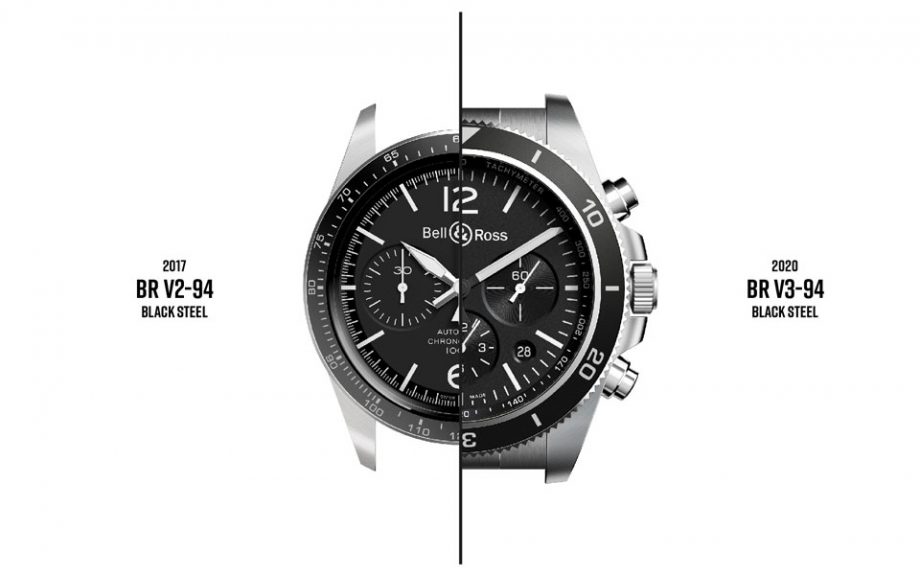 Firstly, the case diameter has been increased from 41 to 43mm, a small increase we think you’ll agree but one that can make a huge difference when worn on the wrist. Secondly, where the V2 model has a fixed steel bezel, the V3 switches it out for a bi-directional rotating steel version. Both get a black aluminium ring, but the V3 gets a 60-minute scale where the V2 has a tachymeter. Bell & Ross has chosen to give the V3 a tachymeter as well, but on the inner flange instead.

The other noticeable difference is that the V3 gets an additional chronograph counter in the form of a 12-hour counter at the 6 o’clock position. Otherwise, it retains the 30-minuter counter at 9 o’clock and central chronograph seconds counter. When it comes to the bracelet, the V3 employs a “semi-cover” design, whereby an additional piece of steel is fitted to form a link between the strap and the case to give the impression of an integrated bracelet. Both watches run on the same BR-CAL.301 automatic chronograph movement.

The Bell & Ross BR V3-94 is available now with either a steel bracelet or black calfskin leather strap for AU$6,800 or $6,300, respectively.