One of the main styles within watchmaking is the aviator, or pilot’s, watch. These watches aren’t bound by a strict set of criteria as to what features they must or mustn’t include – although many do share similarities – but they all have the same end goal to provide a genuine function to a pilot. The Santos de Cartier is considered by many to be one of the very first examples of a pilot’s watch, which was made for the Brazilian aviator Alberto Santos-Dumont.

Since that watch arrived in 1911, other watchmakers have made it their mission to produce some of the finest aviation-style watches around, and one company that puts an emphasis on creating tools for pilots is Breitling. Founded in Saint-Imier, Bernese Jura by Léon Breitling in 1884, it wasn’t until the launch of the Navitimer in the 1940s that Breitling really cemented itself as a go-to brand for aviators.

The company doesn’t cater solely for the aviation market, however, as its SuperOcean family of watches are made for divers, although the vast majority of Breitling’s timepieces can easily be worn on a daily basis. For the best part of its life, Breitling sourced movements from other manufacturers, but since 2009 and the introduction of the in-house made B01, the company has put a heavier focus on manufacturing its own.

We’ve rounded up the best Breitling watches; the ones we think should be on your radar. 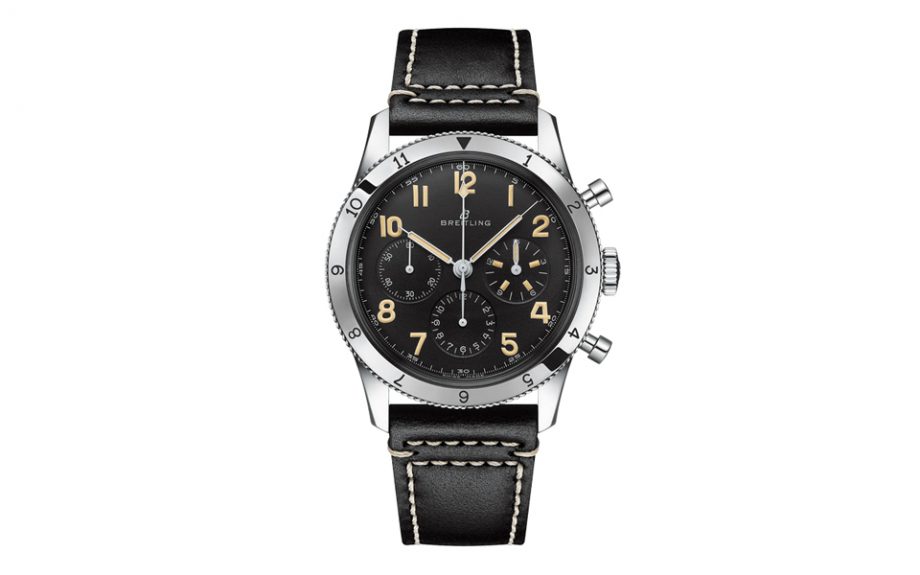 This AVI Ref. 765 1953 Re-Edition, is, at its name implies, a modern reinterpretation of the classic Co-Pilot Ref.765 AVI launched in 1953. It’s been designed to remain faithful to its ancestor, including black dial, highly-domed crystal and matching Arabic numerals. Other features remaining true to their roots include a 41mm case – also available in rose gold and platinum – and Breitling has even gone to the lengths of placing three screws in the exact same position as the model from 1953. While it may have a historic design, the internal mechanism screams modern, as this watch gets Breitling’s in-house B09 calibre made especially for re-edition models. To add an extra layer of exclusivity, this model is limited to 1953 pieces. 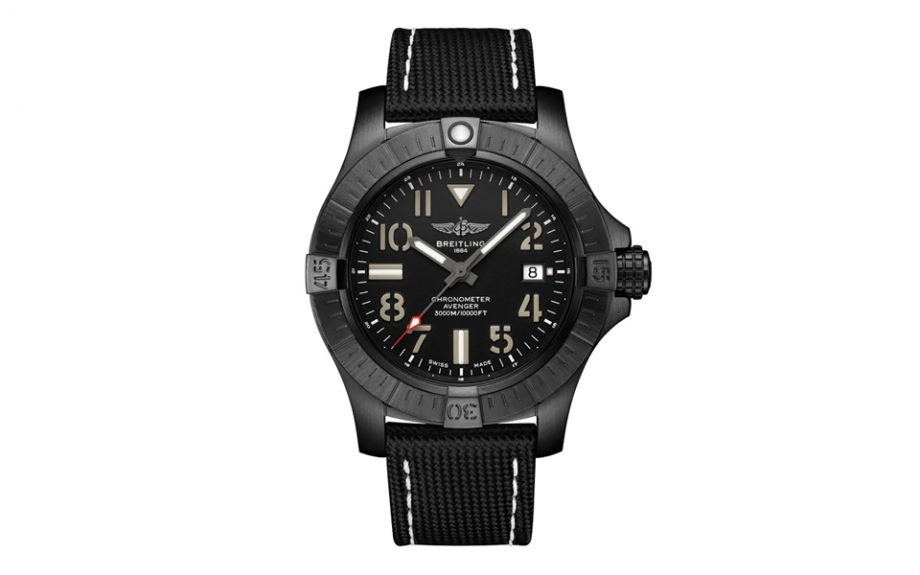 Breitling relaunched the Avenger collection towards the end of 2019 and part of that relaunch included this Avenger Automatic 45 Seawolf Night Mission. Keeping true to its original design, the updated Avenger retains the rider tabs found on the unidirectional ratcheted bezel. The riders tabs, and the pusher buttons, allow the Avenger to be used while wearing gloves (ideal for pilots) while a 3,000m water-resistance rating means it equally has a home on the wrists of divers. This Night Mission edition is particularly alluring owing to its black titanium case, black dial and black leather strap, hence its inclusion on this list of Breitling watches. 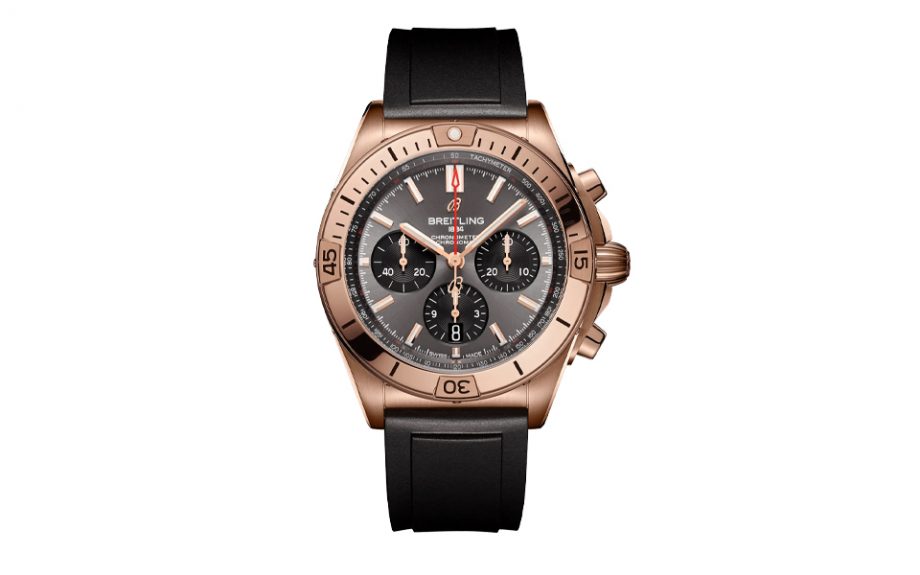 The Chronomat as we know it today has been around since 1984, but its history can actually be traced back to 1941. Back then, Breitling filed a patent with the Swiss government for a new circular slide rule that could be used in conjunction with a chronograph watch. It proved successful and paved the way for the introduction of the Navitimer. The Chronomat was relaunched in 1984 after Breitling was taken over by Ernest Schneider and relaunched again in 2020, and although it’s targeted at the aviation community, it’s also found a home with land and sea dwellers alike.

The new 2020 collection features a change of the strap, to a Rouleaux bracelet, and once Breitling’s in-house B01 calibre with 70-hour power reserve makes an appearance. However, our pick of the bunch is 18K Red Gold edition with a black rubber strap. 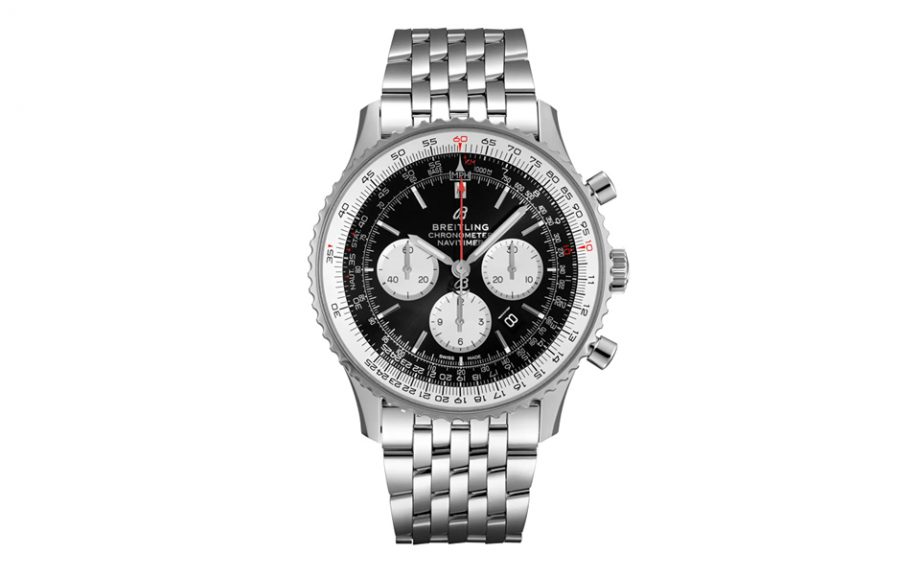 The Navitimer is the model that really put Breitling watches on the radar for many watch enthusiasts. Born out of the popularity of the Chronomat, its large 46mm dial was – and is – chosen to provide optimum readability. The circular slide rule was used to assist pilots with solving mathematical equations, as computers in the days of the Navitimer’s launch were still in their infancy and incredibly large. The Navitimer is another Breitling model that used to rely on third-party movements but today it uses the company’s B01 calibre. 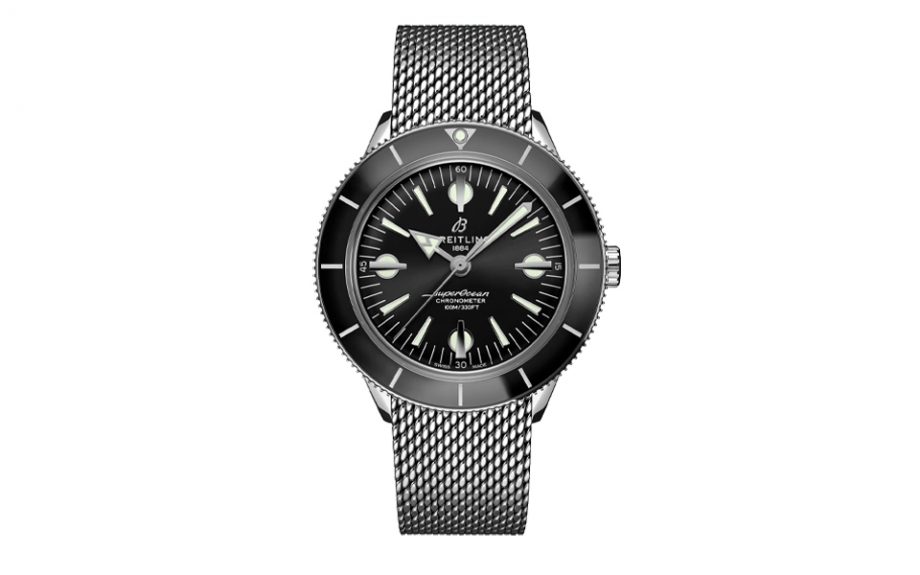 The SuperOcean represented a deviation for Breitling, as it announced a move into diver’s watches when it launched in 1957. The first models did away with a seconds chronograph counter and replaced it with an hour-long one as it was more useful to divers. Today, the SuperOcean is still a diver’s watch first and foremost (notice the absence of a date window) although it now has a more functional seconds counter.

Add to that an unbelievably retro concave bezel and you have yourself a quirky timepiece that can easily be worn on a daily basis. If you can track one down, the Limited Edition model of 250 pieces with graduated rainbow-coloured hour markers adds an extra layer of fun, too. 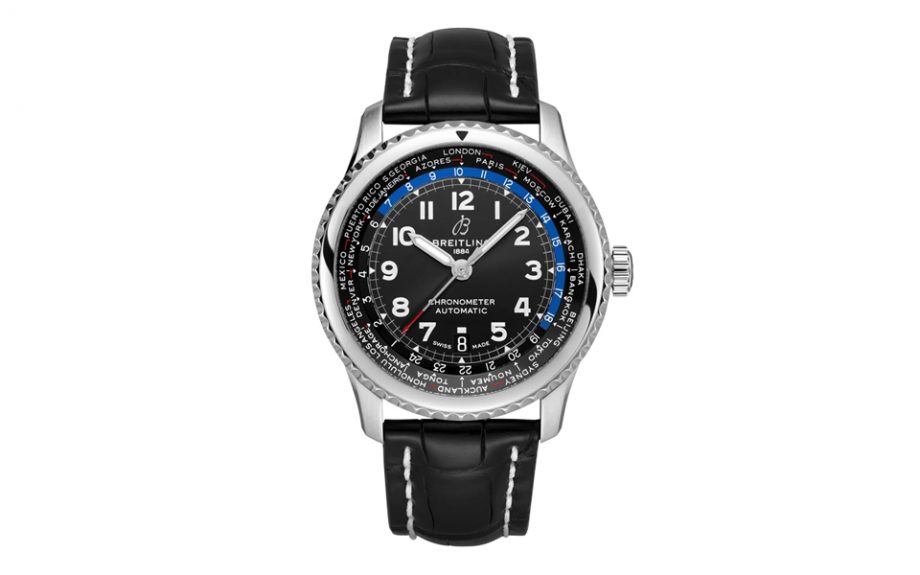 Another watch that is so often invaluable to world-travellers is a world time watch, or in Breitling’s case, Unitime. This dial of this Aviator 8 is able to display the time in the 24 world time zones with just one glance, so you can easily know when to make that important conference call to Singapore, for example. The easily readable Arabic numerals and black dial with blue 12-hour zone make this particular model our favourite within the family. 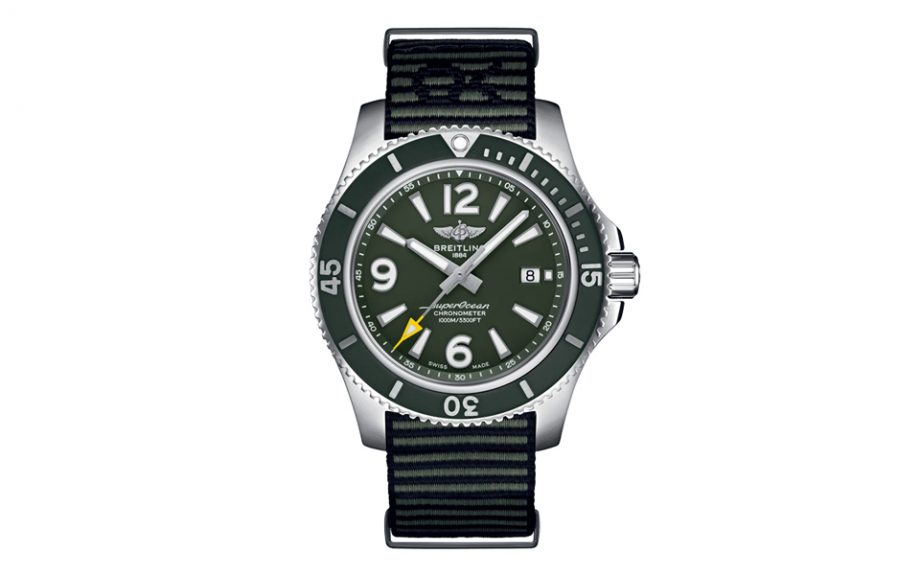 This version of the SuperOcean will appeal to the surfing community in particular due to it being made in collaboration with Kelly Slater’s surfwear label. Water-resistant to 1,000m it will comfortably occupy the wrists of divers, swimmers and surfers, while an ECONYL yarn Nato strap, made from recycled waste pulled from the oceans gives it environmentally-friendly credentials. 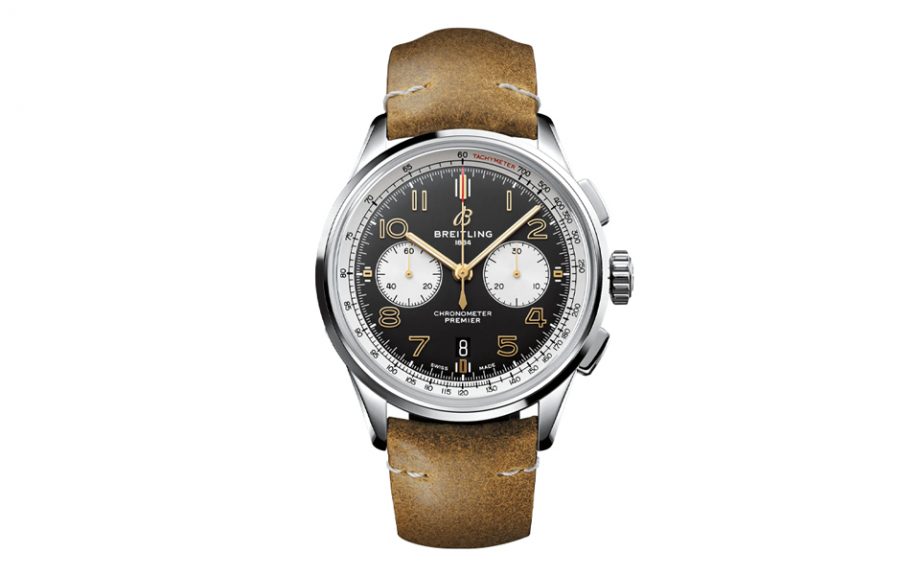 Breitling announced this 42mm timepiece, made in collaboration with British motorcycle brand Norton at Baselworld 2019. Based on the Premier B01 – which has spawned several Limited Edition, collaboration models – this Norton edition has the British company’s logo engraved on the left side of the case and a motorcycle and logo inscribed on the transparent caseback. It’s become a favourite of Brad Pitt, which is reason alone to own one yourself, but add to that other unique features such as its raw brown leather strap and you have yourself an infinitely cool watch. 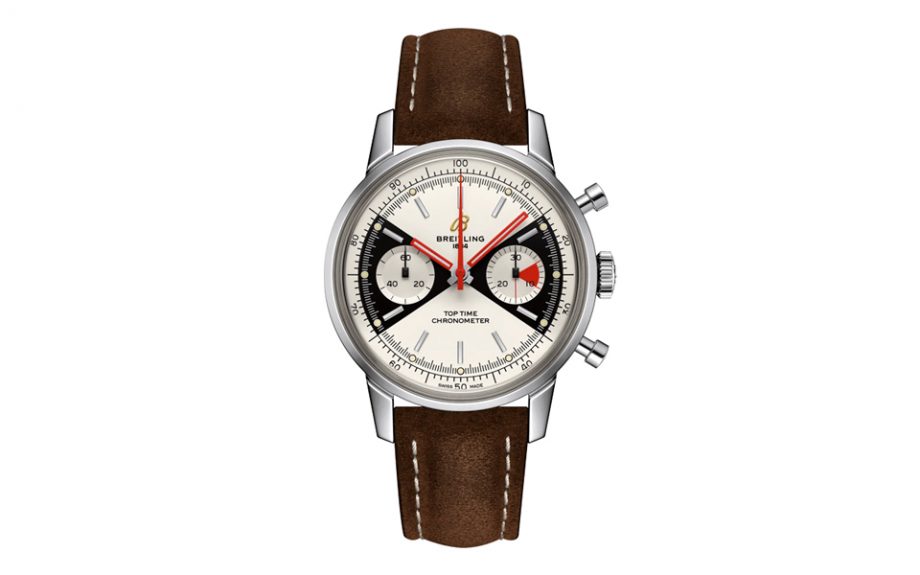 The Top Time is a cool watch, hands down. It’s part of Breitling’s Premier collection and was first launched in the 1960s with the aim of enticing younger guys into the Breitling watches brand, helped by a more affordable price tag, a feature that has been retained with the modern-day reincarnation. The Top Time was commonly found with a Panda dial back in the 60s but Breitling has opted for the more striking Zorro dial with the new model. It’s limited to 2,000 pieces so finding one might be tricky, but if you manage to, we recommend you snap it up.

Absolutely. Breitling is known for making high accuracy watches with commendable overall build quality and finish. All of mechanical grade watches are certified chronometers, something a Switch watch can get when made from only the highest quality components.

How much is the cheapest Breitling watch?

Currently, the most affordable watch by Breitling is the Colt Skyracer, which retails at $2,000. The next cheapest are the Colt Automatic and Colt 41 Automatic, costing around $3,100.

What is special about Breitling?