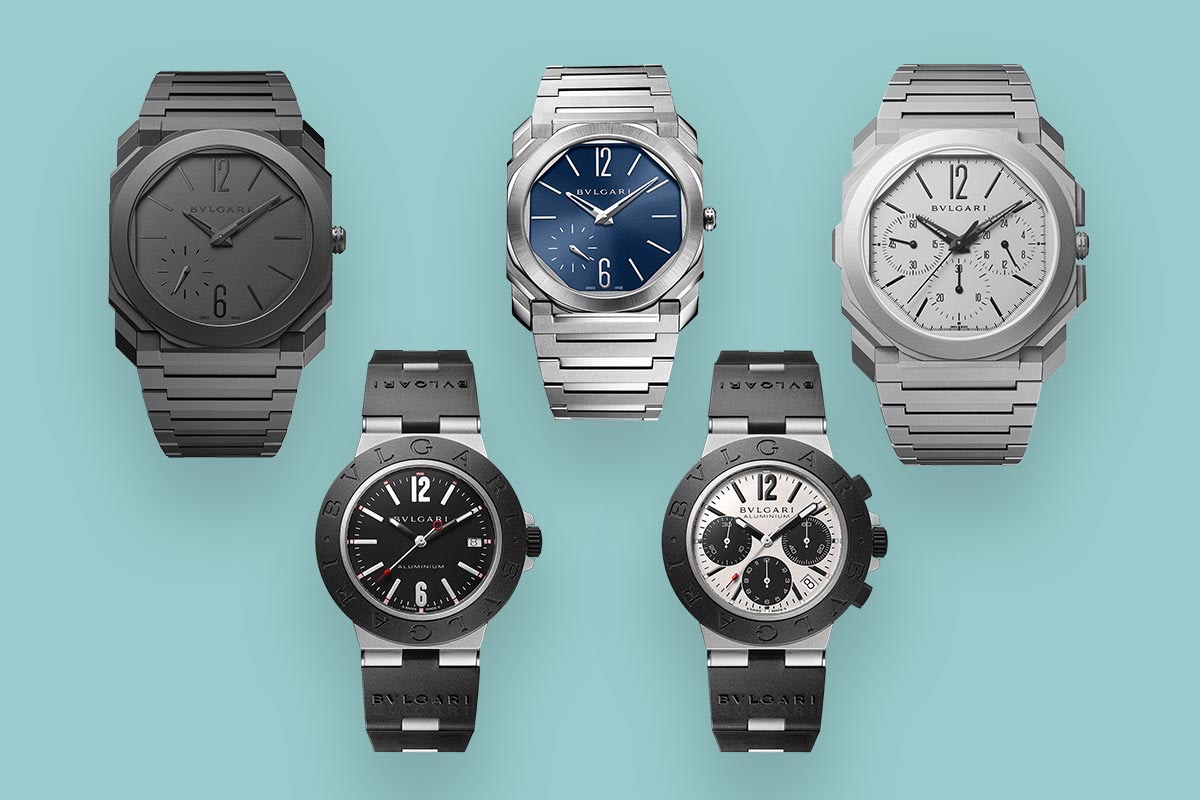 Bvlgari comfortably sits at an esteemed table surrounded by some of the world’s most luxurious brands. Founded by Sotirio Voulgaris a Greek silversmith in 1884 – and who later changed his surname to appear more Italian – Bvlgari has never once faltered from its path to overwhelming success, making strategic decisions along the way – not to mention, a $5.2bn takeover by the LVMH conglomerate – that have helped cement its position in the luxury fashion space.

The unique spelling of the brand name – Bvlgari – despite it being pronounced ‘Bulgari’, sort of came around by chance. When the company created a brass logo for its flagship store on Via Condotti in Rome in 1934, the letter ‘V’ was used in place of a ‘U’ as a reference to Ancient Rome and Roman numerals. The Bvlgari nomenclature has remained ever since.

While the Italian brand may be best known for its jewellery, the range of luxury watches on offer are ones that are worth paying attention to. Bvlgari didn’t enter the world of horology until 1977, which saw the debut of the Bvlgari Bvlgari, but since then, three new watch collections for men have been released, the most prominent of which being the Octo.

Bvlgari watches propose a genuinely viable alternative to some of the big names in the industry: they’re Swiss-made, in Neuchâtel (birthplace of Zenith), and benefit from in-house movements. Bvlgari’s horology arm has seen considerable investment in recent times, which has allowed the company to produce some of the most technically advanced timepieces in the world, a few of which are mentioned below.

Most importantly, Bvlgari watches exhibit a clear distinction in aesthetic from their other luxury Swiss watch counterparts. They’re bold, yet elegant and perfectly bring together the worlds of fine jewellery and high-end horology into seamless packages.

Here is our pick of the best Bvlgari watches for men to buy right now. 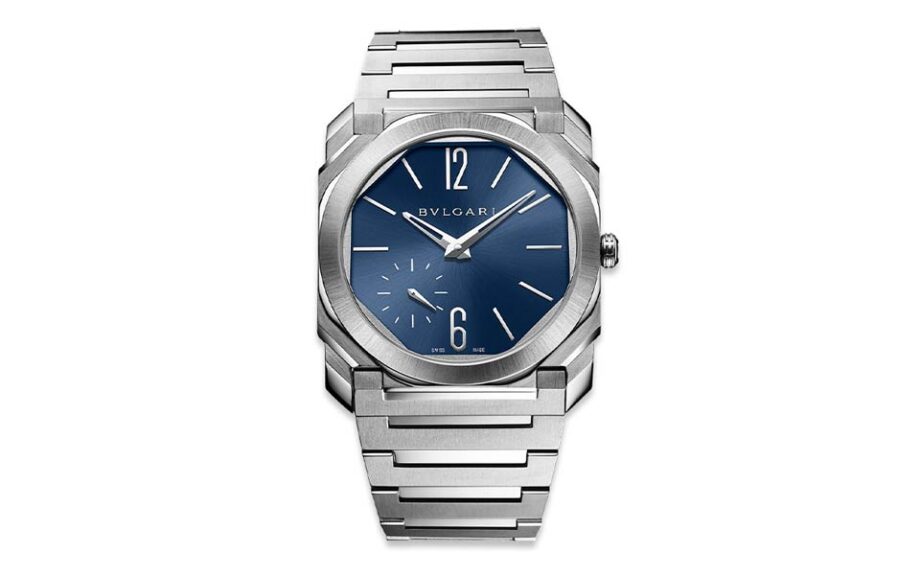 Bvlgari’s Octo Finissimo collection has been around since 2014. The first model, also made in stainless steel, didn’t exhibit the same shine as this latest iteration, however, and it’s the satin-polished finish that should initially draw you in. Once your eyes are locked on, you’ll notice just how damn thin this thing is.

It’s so thin, in fact, (although, technically 0.10mm thicker than its predecessor) that it earns the title of the world’s thinnest stainless steel automatic watch. That svelte frame has Bvlgari’s own BVL 138 Finissimo movement to thank, coming in at just 2.23mm – the thinnest time-only automatic movement in the world.

As we said, Bvlgari watches are bold, yet elegant, and nowhere is that better exemplified than with the Octo. A highly minimalist dial, seen here in blue (still very much a popular colour for watch dials) displaying just the same and small-seconds, combines with a 40mm case resulting in a watch with serious impact. 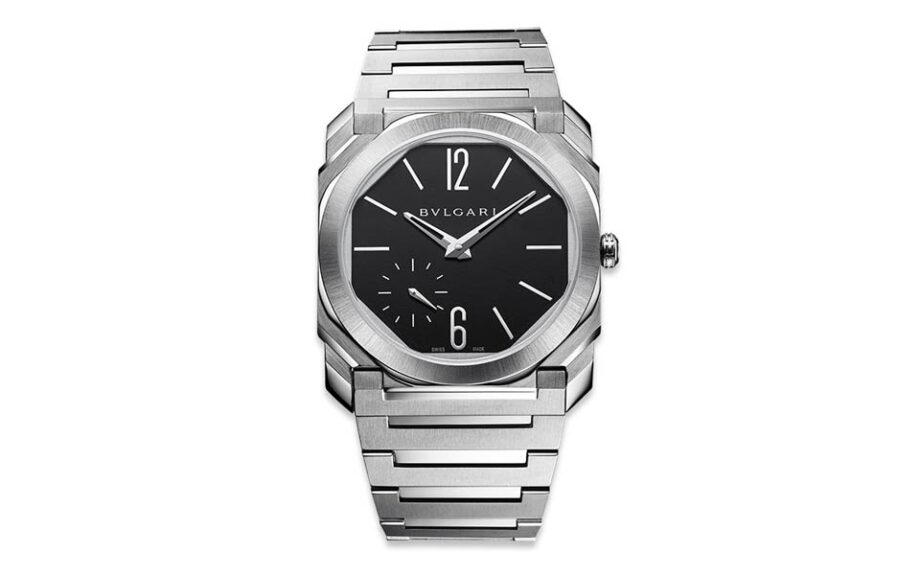 If blue dials aren’t your cup of tea and you fancy something a little more traditional, Bvlgari is more than happy to oblige with a black-dialled version of its stunning ultra-thin timepiece. Water-resistant to 100 metres and boasting a 60-hour power reserve – genuinely impressive when you consider how slim the movement is – helped by way of a platinum micro-rotor (the use of such material providing even more for your money).

These versions of the Octo Finissimo represent the first time Bvlgari has opted for a satin-polished case for the collection, with previous models being sandblasted. If you were ever of the disposition that the finish of a case makes no difference to the watch itself, this Bvlgari provides clear evidence that is not the case.

A satin-polished stainless steel watch with integrated bracelet immediately threw this Bvlgari into the pool of other luxury watches with similar features, but when you take the ultra-thin sizing into account and take a look at the price, the Octo Finissimo is in a league of its own. 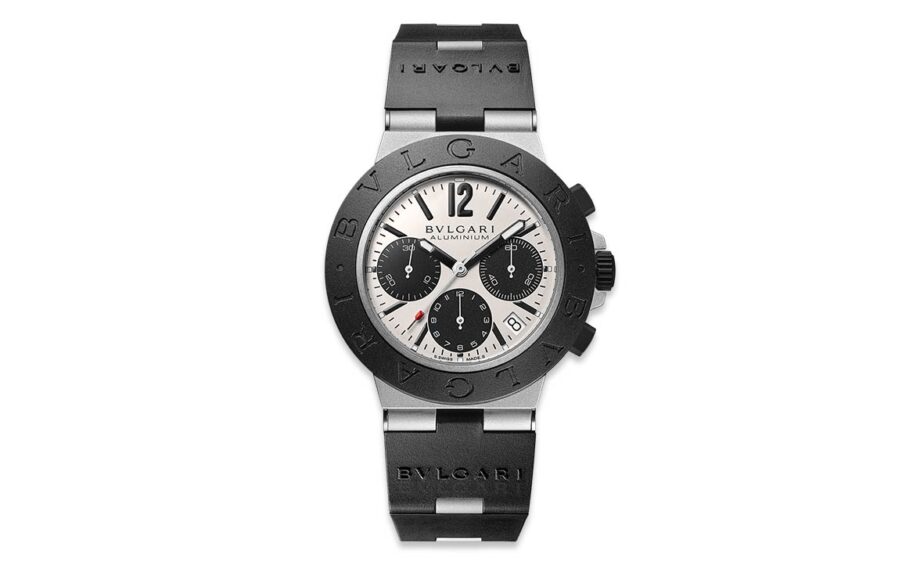 The other equally iconic Bvlgari watch for men is the Bvlgari Bvlgari. Released in 1977 and named as such due to the double use of the brand name around the bezel, it proved successful with fans. While the brand has dropped the double naming, the engraving around the bezel remains.

This 2020 model may appear to be a bold and brash watch at first glance is actually something far more refined. Besides, 90s style – something this watch has in spades – has made its way back into fashion, so we expect big things for the Bvlgari Aluminium.

Its predecessor, launched in 1998, also used a combination of aluminium and rubber, giving the company a unique and fun watch offering that proved a hit with customers. But, while that watch was available in both quartz and automatic variants, the 2020 edition is strictly automatic.

This Chronograph model employs a contrasting combination of black and off-white for the dial, resulting in a Panda effect. With just one Arabic numeral – 12 – and positions 3, 6 and 9 being covered by the sub-dials, there is plenty on the dial to keep your attention (we invite you to play a game of ‘spot the date window’).

Powered by the Bvlgari calibre B130, based on the ETA 2894, this entry-level Bvlgari timepiece is a robust offering with 42-hour power reserve. 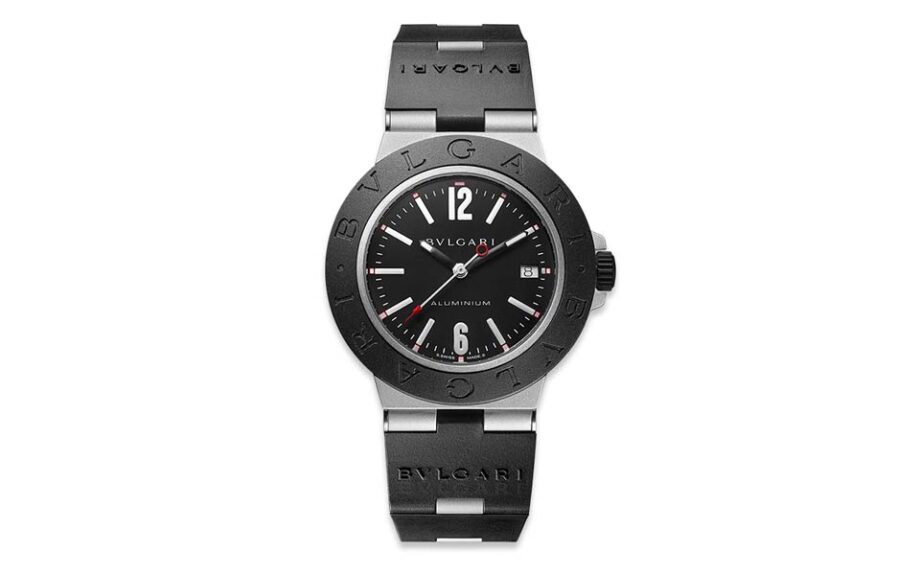 Chronograph dial too cluttered for your liking? Then how about the Bvlgari Aluminium with black dial? Removing the sub-dials, reinstating the number 6 and moving the date window to a more conventional 3 o’clock position, this black on black on silver timepiece looks the business.

If anything, the use of the two beefed-up Arabic numerals helps to keep this watch in proportion – although at 40mm it’s not exactly what you’d call extra-large. Indeed, when viewed from the side it’s surprisingly slim and thanks to the combination of aluminium and a titanium caseback, is remarkably lightweight too. 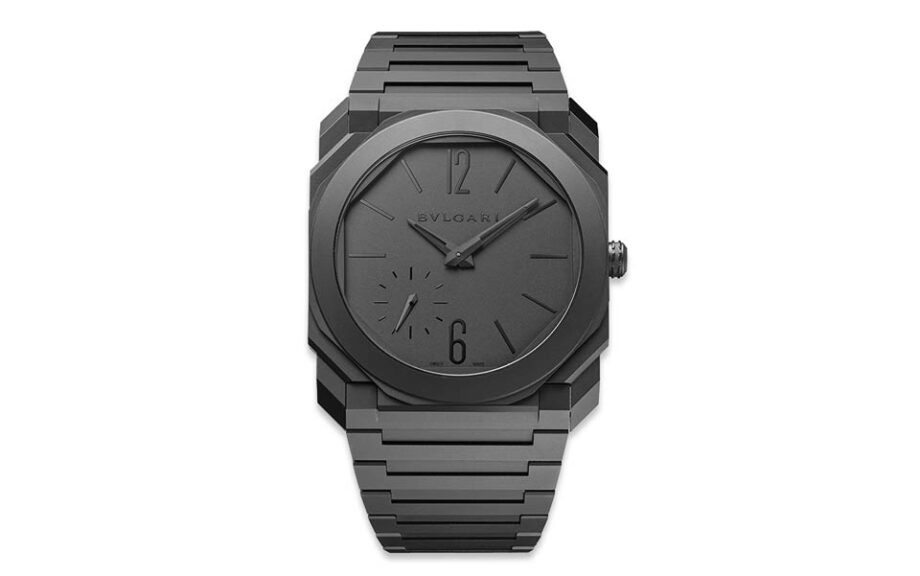 Thought we were done with the Octo Finissimo? Think again. Bvlgari’s ultra-thin timepiece is available in an array of materials and finishes, each of which presents a unique interpretation. Take the polished stainless steel edition above, for example. When compared next to its sandblasted predecessor, you can immediately discern a difference, and the two would be suitable for different occasions.

The same can be said of this black sandblasted ceramic model – who doesn’t love an all-black timepiece by the way? – as it can also be had in a polished variant. We’re all about the non-polished matte version, however, which gives off a far more stealth-like appearance as it won’t draw nearly as much immediate attention as its ultra-shiny polished cousin.

This model doesn’t get the 100 metres water-resistance enjoyed by the stainless steel brethren (instead you get 30 metres) but the same BVL 148 Finissimo calibre can be found beating away inside the 5.5mm ceramic case. 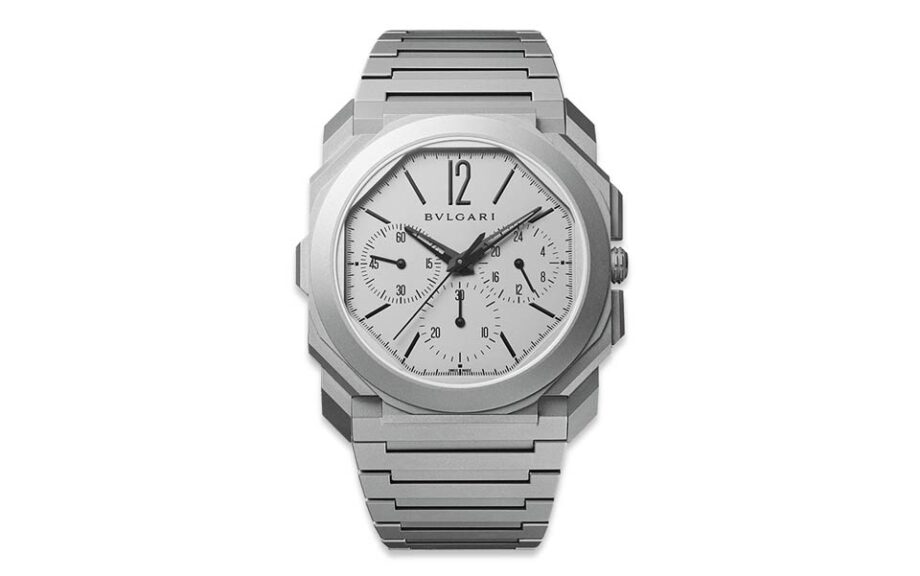 Rounding out the list of best Bvlgari watches to buy is this record-breaker. Another member of the Octo Finissimo clan, the Chrono GMT holds the record for the thinnest chronograph watch in the world. The fact that Bvlgari has been able to develop various ultra-thin movements for various Octo Finissimo models speaks volumes of its commitment to Haute Horologie and to the fact it should be a watchmaker to be taken seriously.

Producing the movement for this Chrono GMT – the BVL 318 – is no mean feat. With the entire package coming in at 6.9mm thin, you may be thinking it’s somewhat rotund, and there are thinner watches to be found, but none that sport a chronograph function. The BVL 318 itself is just 3.3mm thin, taking the title of world’s thinnest chrono movement away from the Piguet Calibre 1180 (3.95mm).

The thinness is possible by way of making the movement rather wide, which forces the case to be bigger too, and in this case, it is 42mm. But when combined with the integrated bracelet and finished in a stunning sandblasted titanium, it’s a watch you’re going to want to show off.

When was Bvlgari founded?

Luxury Italian brand Bvlgari was founded in 1884 by Sotirios Voulgaris, who later changed his surname to appear more Italian. It was initially founded as a jewellery brand, but expanded into watches in 1977.

How do I tell if a Bvlgari watch is real?

All real Bvlgari watches will have the brand name written with the 'V' Roman numeral instead of a 'U', and will be in all uppercase lettering. Despite the brand name including a 'V', it is pronounced 'bull-gahr-ree'.