If you want to jump on the dashboard camera, or dash cam, bandwagon (and why wouldn’t you? Dash cams can provide you with evidence if you’re in an accident, can capture if you’re unfairly treated by law enforcement, can prevent insurance fraud, and so much more) but you’re unsure where to start, never fear. We’ve rounded up the best dash cams available.

The history of dash cams

It may surprise you to learn that dash cams were first used all the way back in the 1930s! It’s true, although they only took still images, and were only used in police vehicles; this is because dash cams were originally designed to help police officers both catch traffic violators, and to collect photographic evidence of traffic offences being committed.

Over the years, dash cams vastly improved technology-wise: they became capable of recording video, and had instant footage rewatch abilities. However, from the 30s to the 90s, dash cams were still exclusively used by police officers. In the 90s, the footage from police dash cams not only helped in terms of building evidence or finding traffic violators, but it was frequently featured (mostly in a comedic way) on reality shows like COPS; arguably a reason for dash cams’ rise to popularity with the general population.

Around the 2000s, dash cams became inexpensive to produce and less bulky than previous versions, making them easily accessible to the public. Russia was actually one of the first countries where the government not only allowed civilians to use and install dash cams, but encouraged it, due to the countries’ high rate of car accidents and corruption present within their police force – hence the wealth of Russian dash cam footage on the internet today.

Flash forward to today, and dash cams are practically used all over the globe by anyone with a vehicle; and the footage from dash cams is ridiculously popular on YouTube, with some dash cam videos even going viral. Although, some countries have very specific laws relating to using dash cams and making the footage available publicly, so if you’re thinking of investing in a dash cam, check whether you can legally do so in your state/country.

This is entirely dependent on where you reside, but for the most part, no! Most countries and states do allow dash cam use, but, again depending on where you are, there are restrictions that can apply to dash cams.

For example, in the United States, many states, such as New York and Washington, have strict laws about windshield obstructions; so if you live in one of these US states, and your dash cam is deemed to obstruct your windshield and ultimately, your view of the road whilst driving, you can get in trouble with the law.

You also need to consider privacy laws. Some countries and states deem dash cam footage a violation of privacy, especially if it's uploaded to social media.

We recommend thoroughly reading your state and country's laws, or reach out to your local law enforcement, to see what dash cam restrictions will apply to you before purchasing and setting up a dash cam in your car.

What features should a dash cam have?

There are so many different features that dash cams can possess nowadays, but the most important things to look out for is high video quality (4K is the best but not completely necessary; 1080P is fine!), night vision, a looping feature, and a parking mode.

If you’re wanting to get yourself a dash cam, these are the best dash cams available. 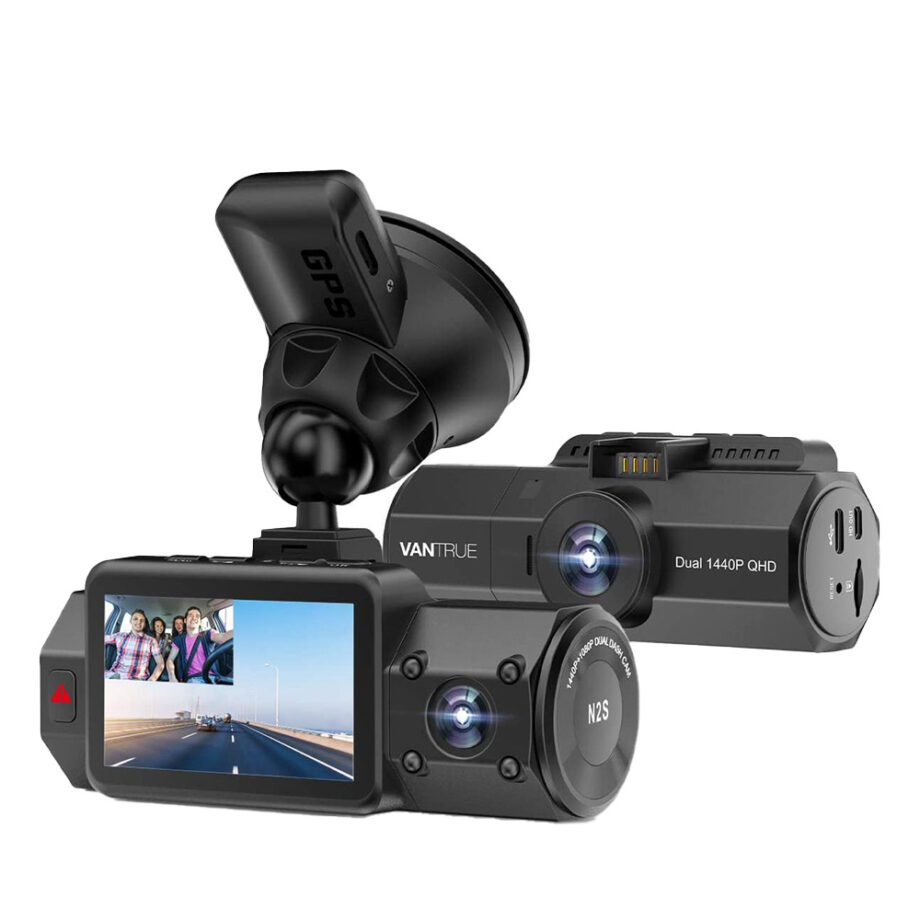 Founded in 2015, Vantrue believes that a top-quality dash cam with strong performance capabilities is a vital necessity for every vehicle driver nowadays. Therefore, they are dedicated to developing high-end dash cams that provide top-level services.

Vantrue makes some of the best dash cams on the market; they were first in the world to produce a dash cam with motion detection triggered parking mode, a 14440P dash cam, a dual 1080P dash cam, and a 4K dash cam. Plus, their dash cams have been rated #1 by a large number of various companies and publications year after year (2021 included!).

While all of Vantrue's dash cams are quite impressive, our top pick is the N2S which features 4K recording on the front camera meaning it easily captures license plates from a distance, 1440P video quality on the interior camera, GPS tracking , night vision, 24hrs front & inside motion detected parking mode (meaning when the car is parked and the engine is off, if any impacts or collisions are detected the N2S will start recording), plus many other fantastic features. Plus, considering all the things the N2S can do, it's very reasonably priced and on the affordable side of dash cams.
Shop Now 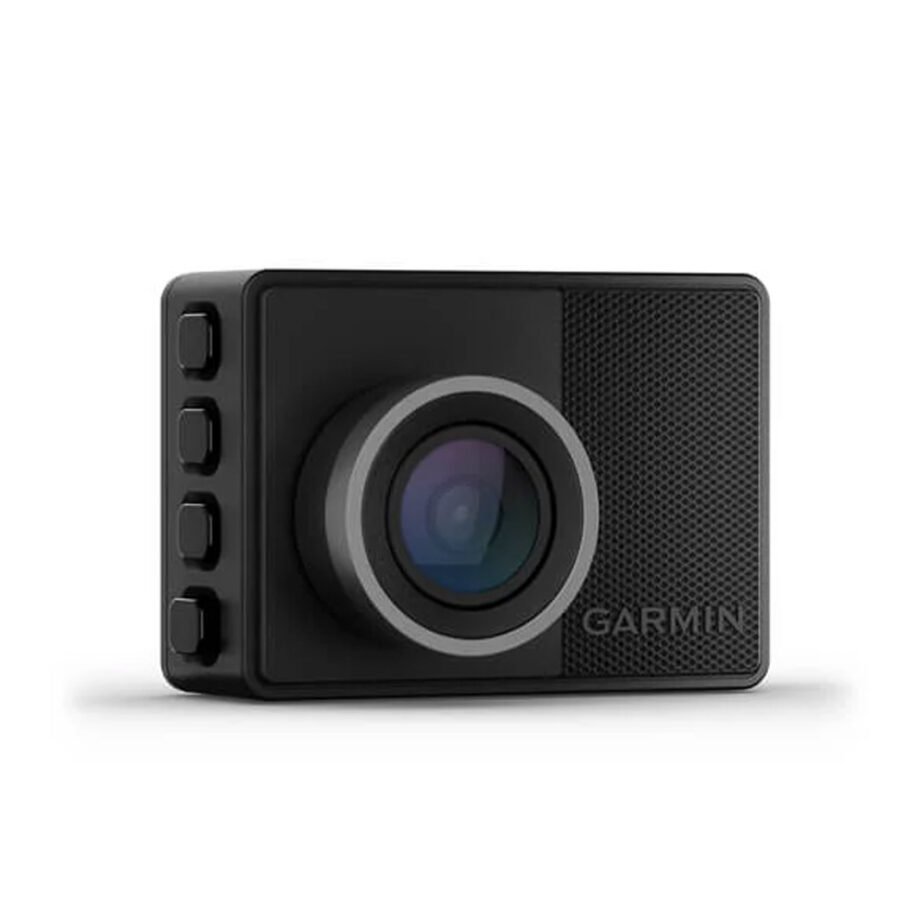 Garmin is a rather large company, founded in 1989, that produces several different products such as GPS Navigation systems, smartwatches, and, of course, dash cams. While Garmin is arguably best known for their GPS technology, they have been making quite a name for themselves with their reputable dash cams.

A Garmin dash cam will give you peace of mind whilst driving thanks to its impressive features. All of Garmin's dash cams are voice-controlled (except the Garmin Dash Cam Mini 2), compact, extremely easy to use thanks to the Garmin Drive smartphone app, will record and save incidents in either 1440P or 1080P video quality, and have glowing reviews and recommendations.

Our pick would be the Garmin Dash Cam 57, which is an affordable small camera that's capable of recording 1440P HD video with a 140-degree field of view and has built-in GPS tracking. Plus, when used with the Garmin Drive smartphone app, the Garmin Dash Cam 57 will be able to provide you with forward-collision warnings, lane departure warnings, alerts for upcoming speed and red-light cameras, and more. This is seriously one of the best dash cams on the market.
Shop Now 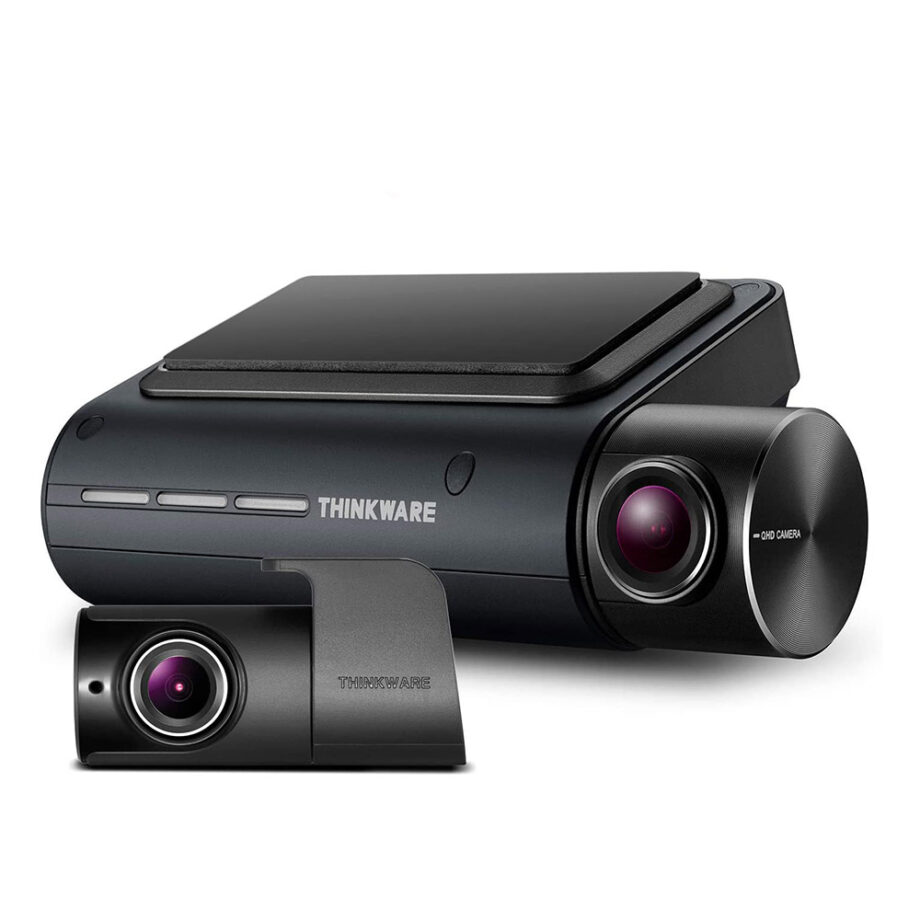 Founded in 1997, Thinkware began by manufacturing and selling GPS navigation systems for vehicles. However, in 2010 they launched their first dash cam and shortly after the company's main focus shifted towards dash cams due to a global growing demand. Now, Thinkware is a leading brand in the global dash cam market, and is committed to producing reliable, award-winning dash cams through their innovative technologies.

All of Thinkware's dash cams come with a 2 year warranty, and the vast majority come with built in wifi and GPS. Plus, the Thinkware Dash Cam smartphone app allows you to have convenient control over your dash cam, real-time viewings, remote access to your dash cam, as well as an efficient way to download videos.

While all of their dash cams are quite good, Thinkware's strongest dash cam is the Q800Pro which is why it's our top pick. If you're after a dash cam that'll pretty much do everything, but won't break the bank, this is it (although it doesn't have 4K resolution but that's not really a necessity for dash cams; just depends on your personal preference). 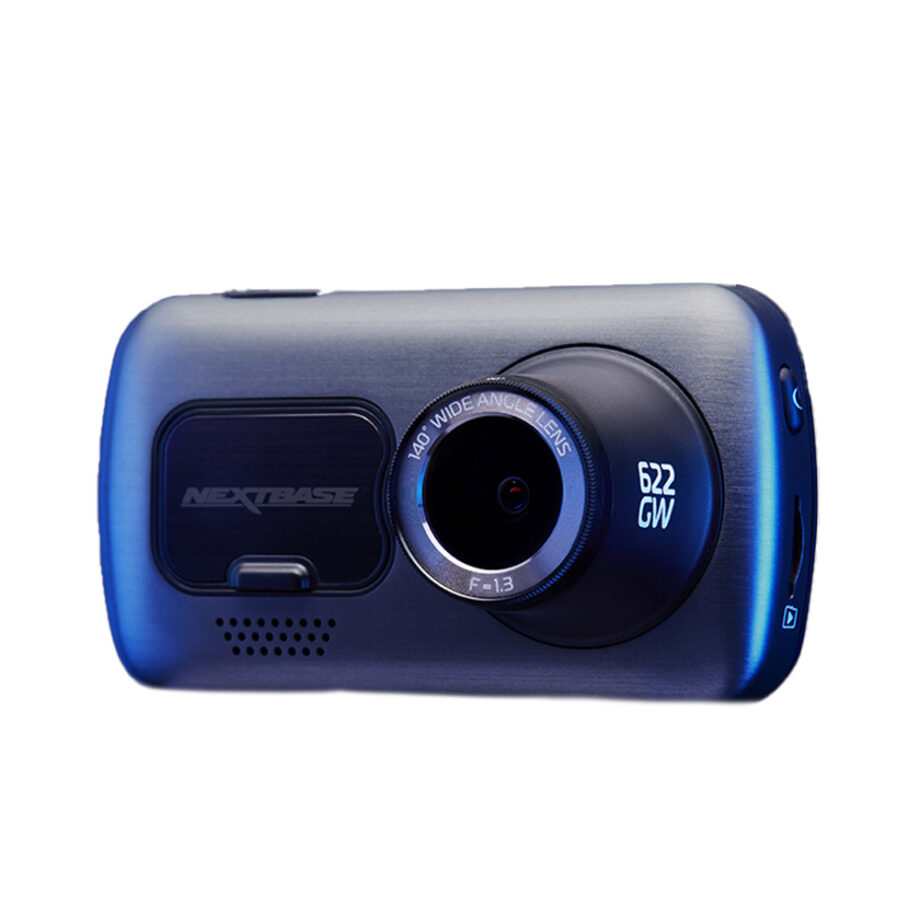 Nextbase is the world's leading and one of the best dash cam brand as well as the world's largest manufacturer of dash cams. Founded in 1999, the British company originally produced in-car entertainment systems such as portable DVD players, but after releasing their first dash cam in 2009, turned their attention to solely dash cams.

Impressively, after campaigning for insurance companies to develop dash cam inclusive policies (which many did), Nextbase dash cams can reduce insurance premiums and will support you when (and if) faced with driving-related false liability claims. All of Nextbase's dash cams feature Alexa voice control, geolocation services, and will automatically call emergency services when involved in an accident.

Our top pick of Nextbase's dash cams is the 622GW which is what Nextbase calls "the ultimate dash cam" and oh boy, does it deliver. Whilst, it's slightly pricier than other dash cams on the market, Nextbase's 622GW really is impressive and worth every penny.

Multi-award winning, this dash cam records at 30fps in 4K to capture license plates and finer details, features digital image stabilisation to reduce vibrations from your car ensuring smooth image quality, super slow motion playback capability to determine exactly what happened in a crash or incident, enhanced night vision, intelligent parking mode that'll automatically record any bump or physical movement involving your car even when it's left unattended, and so many other awesome features.
Shop Now 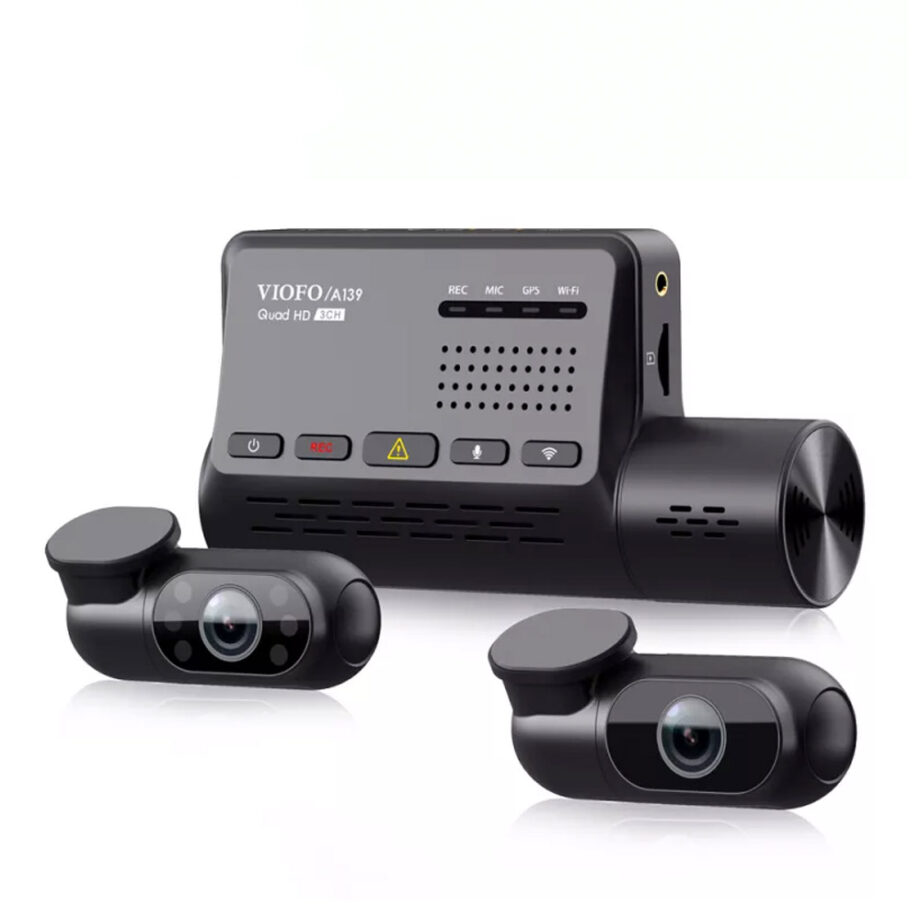 Specialising in dash and action camera design and development, Viofo is now one the world's leading dash cam brands. Committed to producing reliable, trusted, and smart dash cams, Viofo achieve this with their inspired design and innovative technologies.

Founded in 2011, all of Viofo's dash cams have high-quality video resolution, discreet & compact designs, and premium smart functions. Viofo dash cams are also well-known for their ability to withstand both extreme heat and cold conditions, meaning when in-car temperatures are very high (very common in summer) or very low, the dash cams have superior temperature tolerance and longer service life.

When it comes to Viofo, all of their dash cams are high-quality but if we had to pick, we'd go with the A139. Again, our top pick is a little pricey, but the A139 does come with three cameras: front, interior, and rear. The front camera is will record in 2K 1440P video quality and is equipped with high clarity night vision ensuring rich details are still recorded even in low light conditions, while the rear & interior cameras will record in 1080P with the interior camera also featuring a 6 element infrared LED lamp ensuring it clearly captures cabin activity even in complete darkness.

10 Best Cycling Watches To Get More From The Road

The 11 Best Garmin Fitness Watches & Smartwatches To Buy In 2021