The world of high-end watches is full of well-respected brands with illustrious histories. IWC – or the International Watch Company – is one such brand with a history that’s worth looking into. The company was founded in the Swiss town of Schaffhausen in 1868 by Florentine Ariosto Jones, a watchmaker who had previously worked in Boston, USA.

Jones wanted to start his own company to produce watches that combined intricate and technical Swiss craftmanship, with the modern-for-their-day technologies introduced by America and other overseas countries. IWC was born, and it started life by making pocket watches, before expanding into wristwatches for men and women.

It was thanks to a chance meeting with Johann Heinrich Moser – who not only supported Jones’ vision but had built his own hydropower plant in Schaffhausen – that Jones found the vital component to power the high-tech equipment he needed to use in order to produce his watches. Jones then moved to a new factory, still on the Rhine river, to accommodate the growing number of staff.

It wasn’t until 1974, when a huge rise in gold prices and a major drop in the value of the Swiss Franc against the US Dollar, that forced IWC to switch to using titanium as a material – a first in watchmaking – a practice it still continues to this day. Today, IWC makes a conscious effort to be as sustainable and environmentally friendly as possible and was voted number one in a group of 15 Swiss-based watch manufacturers for its environmental rating.

While the company does produce dive watches, it’s perhaps best known for its association with aviation, with its first Pilot’s watch arriving in the mid-1930s. This watch could operate at temperatures as low as -40 C to 40 C, had an anti-magnetic escapement and a rotatable bezel so pilots could mark their take-off times.

We’ve rounded up 10 of our favourite pieces to help you buy the perfect men’s IWC watch. 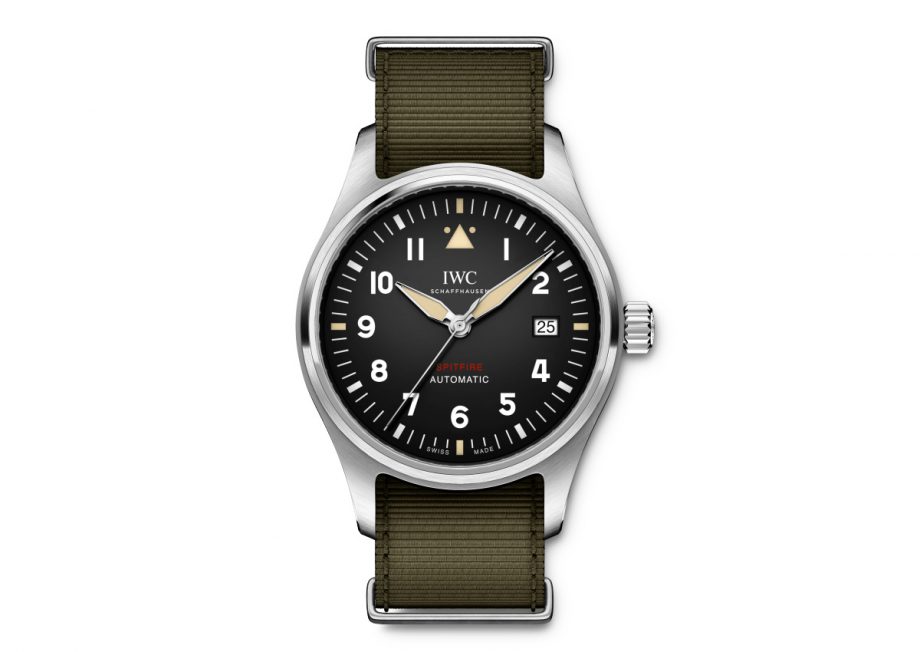 This Pilot’s Watch Automatic Spitfire pays homage to the Pilot’s Watch Mark 11 released in 1948. That model essentially paved the way for how all pilot’s watches should look, and this modern-day Automatic Spitfire remains true to the design philosophy of a highly legible dial. Despite its historic roots and aesthetic, there’s nothing historic about the internal components, as this is the first watch to use IWC’s in-house 32110 calibre, that has a power reserve of three days. Add to that an inner iron-made case to protect it from magnetic interference and a green NATO strap that gives it oodles of military appeal. 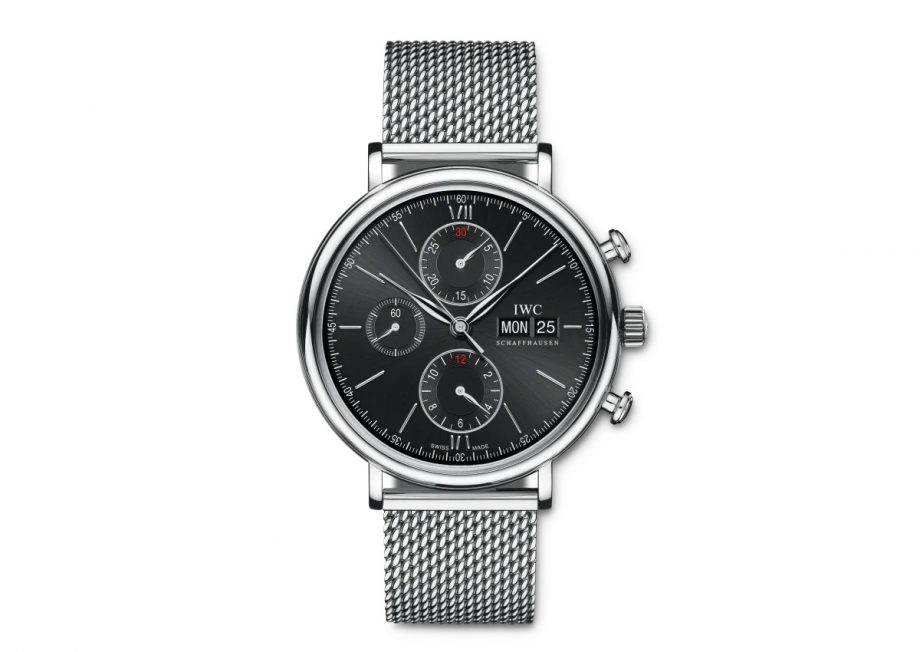 Named after the small Italian fishing village, IWC launched the Portofino in 1984, as a “pocket-watch-style wristwatch”. A dress watch through and through, the Portofino replaces Arabic numerals found on watches such as its Pilot family and replaces them with Roman numerals. The Chronograph version uses IWC’s self-winding 75320 calibre with a 44-hour power reserve, and completing the luxurious and elegant look is a steel Milanaise bracelet. 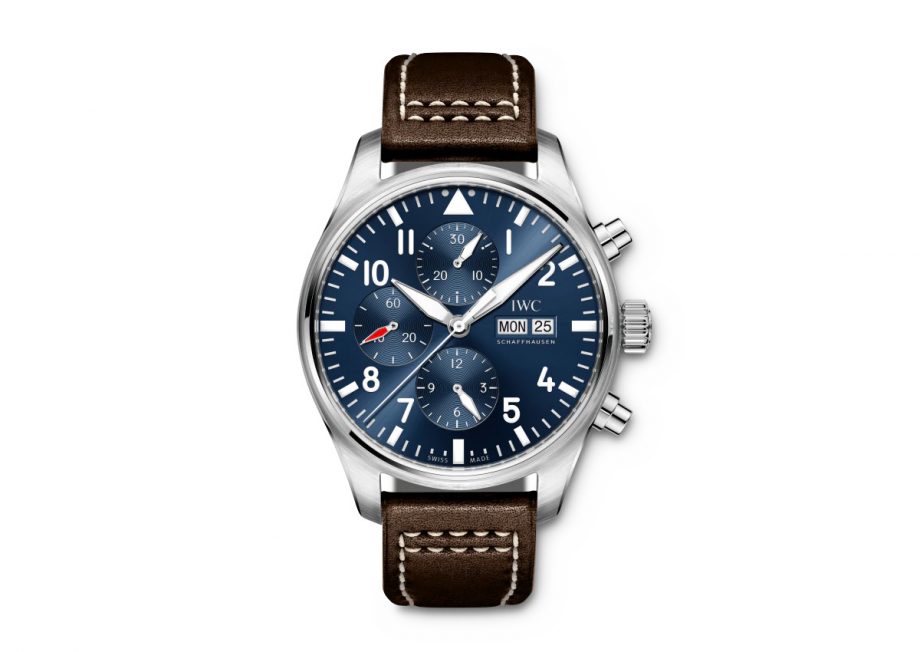 IWC formed a partnership with the estate of the author and poet Antoine de Saint-Exupery, which would allow the two to collaborate on future timepieces, taking inspiration from “The Little Prince” novella. This Pilot’s Watch Chronograph Edition is a prime example, with a blue dial making it instantly recognisable. All “Le Petit Prince” editions share this feature – although they’re not the only IWC watches to do so – as well as engraving on the caseback of the prince himself, complete with cape and sword. 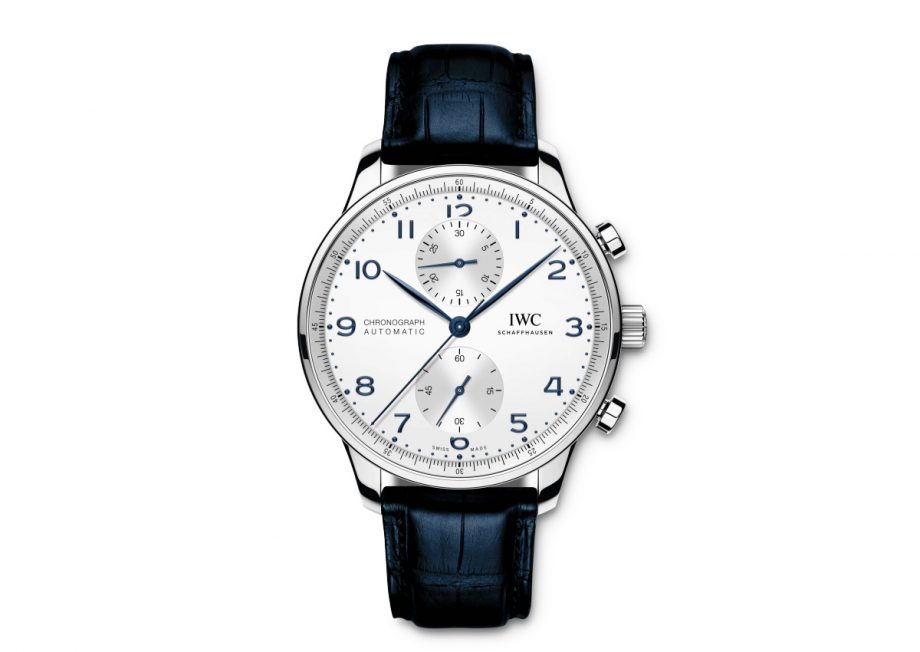 IWC created the Portugieser family in response to the request of two Portuguese merchants who asked IWC to make them a large and precise wristwatch in the 1930s. They wanted it to meet nautical chronometer standards, but for it to also be oversized, which meant IWC had to resort to using a pocket watch movement. The Portugieser was born, and while it may be smaller than some of IWC’s other models at 41mm, its thin bezel accentuates its size. Because of its nautical-led design, it features Feuille hands, a railway track chapter ring for precise time reading and for this particular model, minutes and seconds chronograph dials. 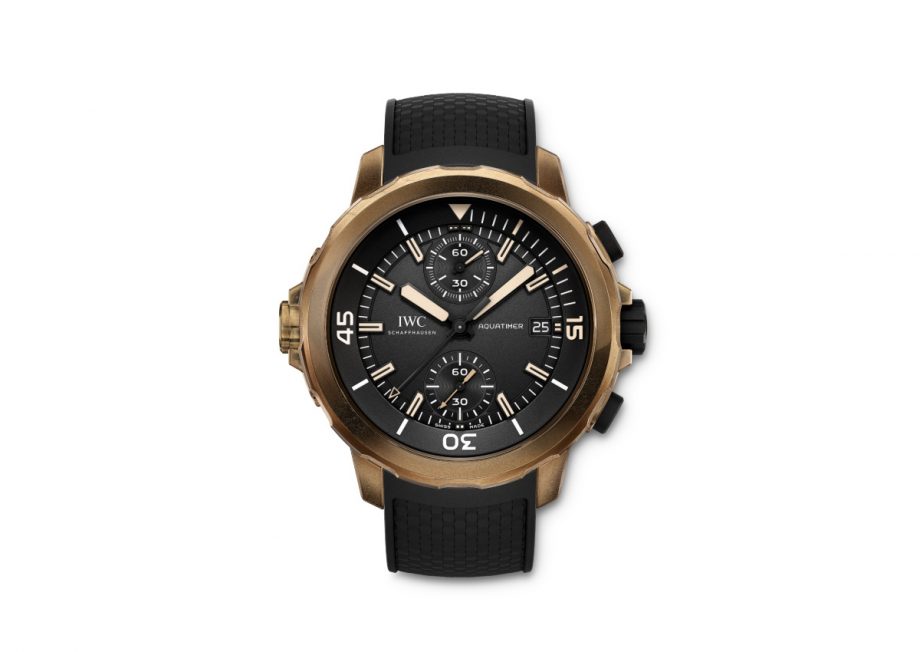 IWC made a deliberate design move when choosing the bronze material for this Aquatimer’s case, as pays homage to the HMS Beagle, the ship that Charles Darwin navigated to the Galapagos Islands. It’s also a material that patinas over time – an oxidised layer that naturally forms as a result of exposure to air, sun, salt and other pollutants – so each individual model will develop its own unique look. IWC has designed this version to be able to accompany you on various expeditions too, as it features a SafeDive system – whereby an outer bezel which rotates an inner bezel – as well as a water-resistant rating of 30 Bar/300 metres. 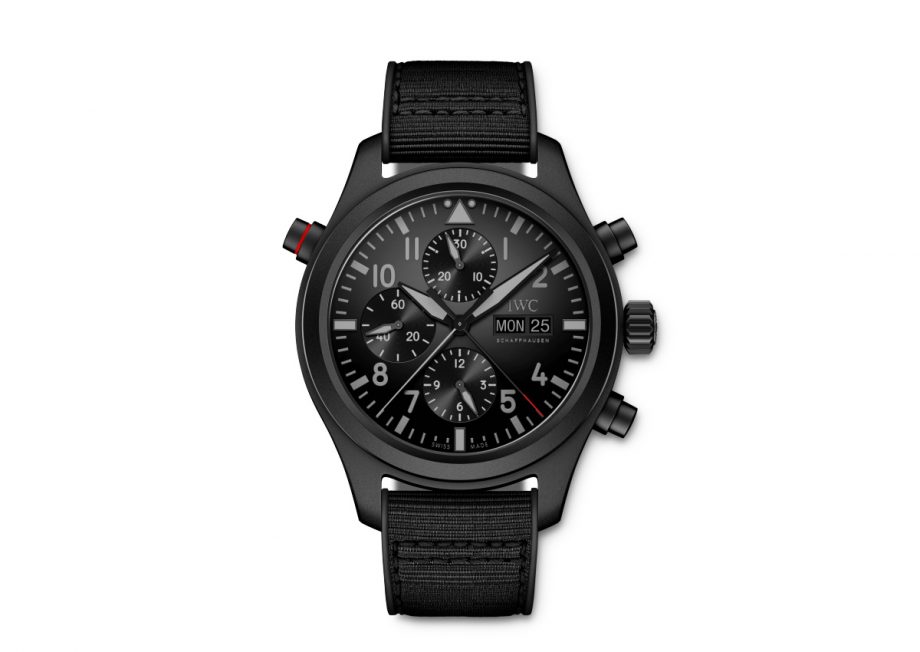 This Pilot’s Watch makes use of IWC’s proprietary Ceratanium material, which combines the lightness and rigidity of titanium with the wear-free and scratch-resistant properties of ceramic. One of the byproducts of the marriage is a matte black colour, which IWC has used not only for the case but for the push-buttons and pin buckle too. An additional split-seconds hand is what makes this a double chronograph, which allows the wearer to record intermediate times, or two separate actions simultaneously. 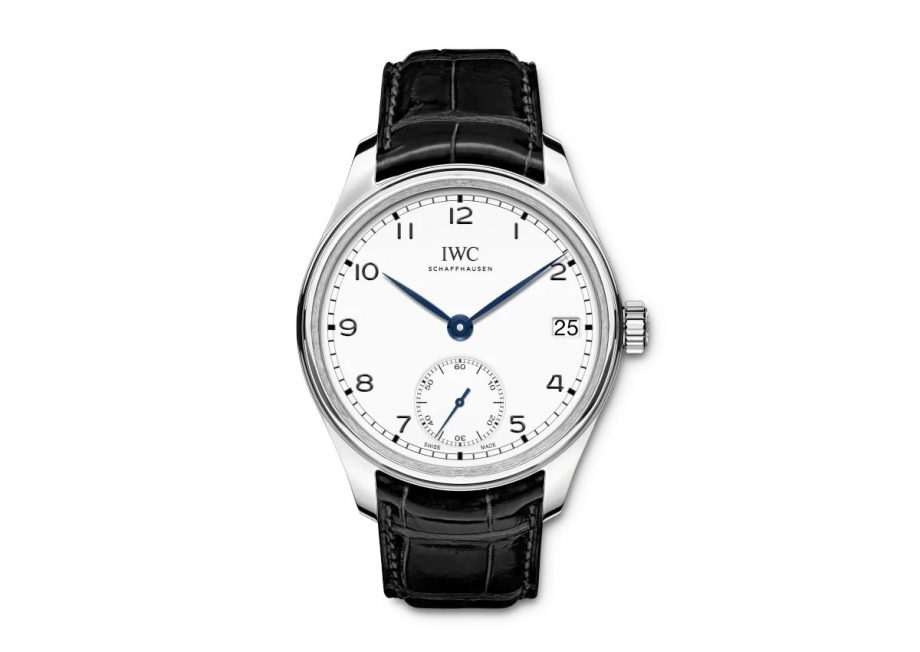 The clue to this Portugieser’s special feature is in its mouthful of a name: a movement that has a power reserve of eight days, so you only need to wind it once a week. The 150 Years nomenclature refers to IWC celebrating its 150-year history in 2018 – this Portugieser was joined by 28 other watches as part of a ‘Jubilee Collection’ – and an engraving can be found on the movement, visible through the caseback window. This particular model is limited to just 1,000 pieces and remains true to the Portugieser’s simplistic design language, but this time around it gets a white lacquer dial and blued steel hands – traits it again shares with the Jubliee Collection. 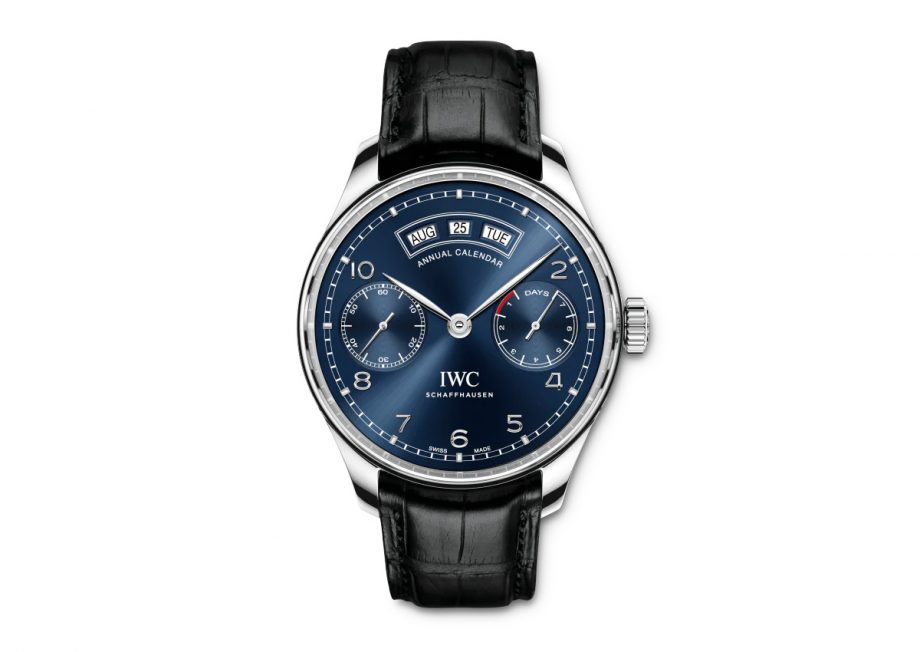 IWC has once again chosen a logical name for this Portugieser, as it features an annual calendar. This means it ‘knows’ how many days are in each month, so requires no intervention from the wearer, apart from just once at the end of February each year. This is the first time an Annual Calendar complication has been attached to a Portugieser – IWC has already employed a perpetual calendar complication on a previous Portugieser – and is combined with a 52850 calibre, which has a seven-day power reserve, to create a watch of utmost elegance. 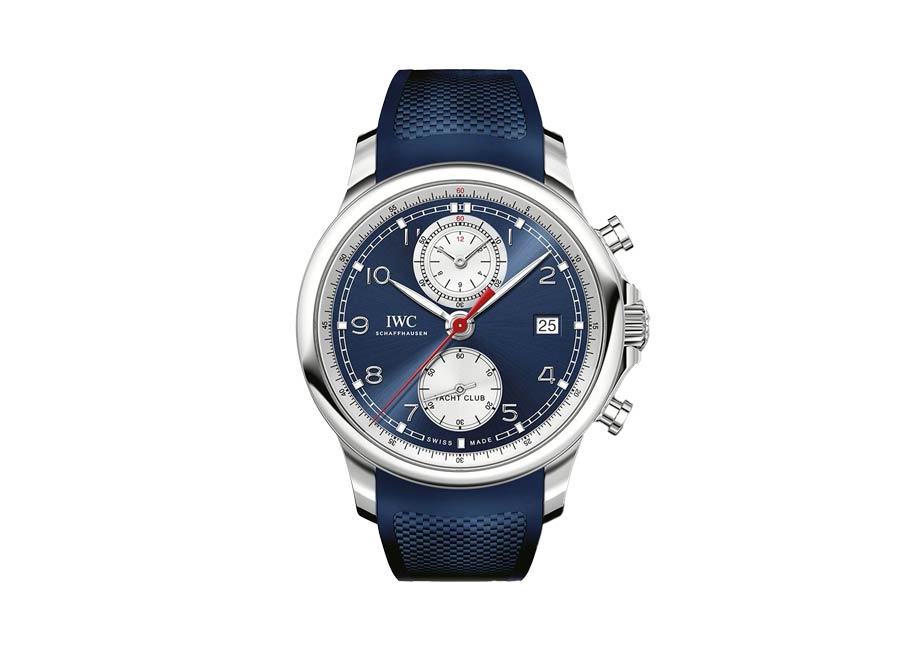 There are four variations of the Yacht Club Chronograph (we really love the 18ct gold model) but this stainless steel and blue dial version is still incredibly alluring and more accessible thanks to its more affordable price tag. It makes use of IWC’s 89361 movement, which has a 68-hour power reserve and a flyback function, meaning you don’t need to stop the chronograph before resetting it. You can also use it to measure short and long stop times thanks to a quarter-second scale and an analogue sub-dial, respectively, while its luminescent hands and indices make their only appearance in the Portugieser family. To further enforce its sporting credentials, the Yacht Club Chronograph swaps out a leather strap for a rubberised version. 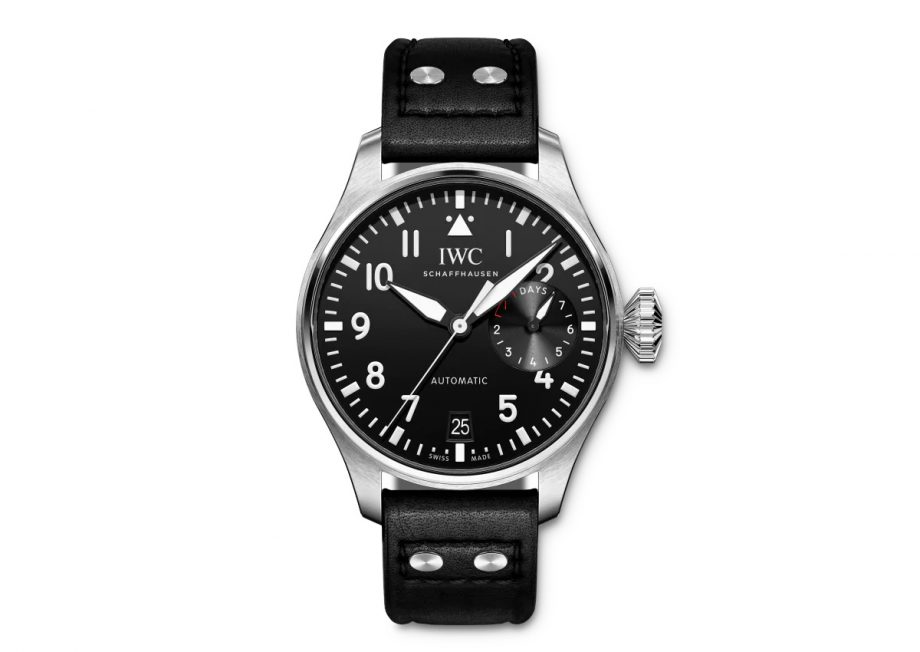 And finally, we move on to perhaps one of the best-known watches in IWC’s lineup: the Big Pilot’s Watch. Its history can be traced back to 1940 when IWC first started producing Big Pilot’s for the German Air Force, and the design that debuted back then still features on models today – which includes subtle stylings such as a triangle flanked by two dots at 12 o’clock and a sans-serif typeface for the numerals. The current Big Pilot’s Watch was re-released in 2002 with a new 46mm case (the original was a hefty 55mm in diameter), a date display at 6 and a power reserve dial at 3 (the 52110 calibre can last seven days). Another feature unique to the Big Pilot’s is a conical crown, which is designed in such a way so that it is easy to use while wearing gloves.

How to spot a fake IWC watch?

Genuine IWC watches have sapphire crystals guarding the face of the watch. To check, smear a drop of water or two on the surface. If it is sapphire glass, water will pool together. If the water disperse unevenly, it is a knock-off made with plain glass.

How to care for your IWC watch?

To keep your IWC watch looking great, a little bit of water and elbow grease is enough. For the strap, polish with a little cream and soft cloth.

Which IWC watch is the most popular?