Look down at your hands. Are they the well-groomed paws of a modern gentleman? Or are you sporting a set of ragged claws better suited to a witch in a horror flick?

The days of nail care as a woman’s domain are long gone. Men happily rock up to the salon and submit their mitts to be tidied up by professionals, but if that’s not your style, there’s still no excuse for tattered talons. Invest in a manicure kit so you can DIY your way to respectable nails.

Men’s manicure sets range in size and price, from bare-bones 3-piece bundles to extravagant 10-piece splurges. The right kit for you will depend on the condition of your nails, which tools you need, your personal preferences, and your budget.

So what tools should a man’s manicure set contain and what are they for? Allow us to provide a quick crash course:

As an extra note of caution, not all manicure kits will be allowed in your carry-on bag if you’re travelling. Instead, you’ll have to make sure you pack it in with your checked luggage. Some manicure kits are carry-on safe, and these will be clearly defined.

You’ll find some manicure sets have more tools included, but those mentioned are the real essentials and will have your fingers and toes looking presentable in no time. 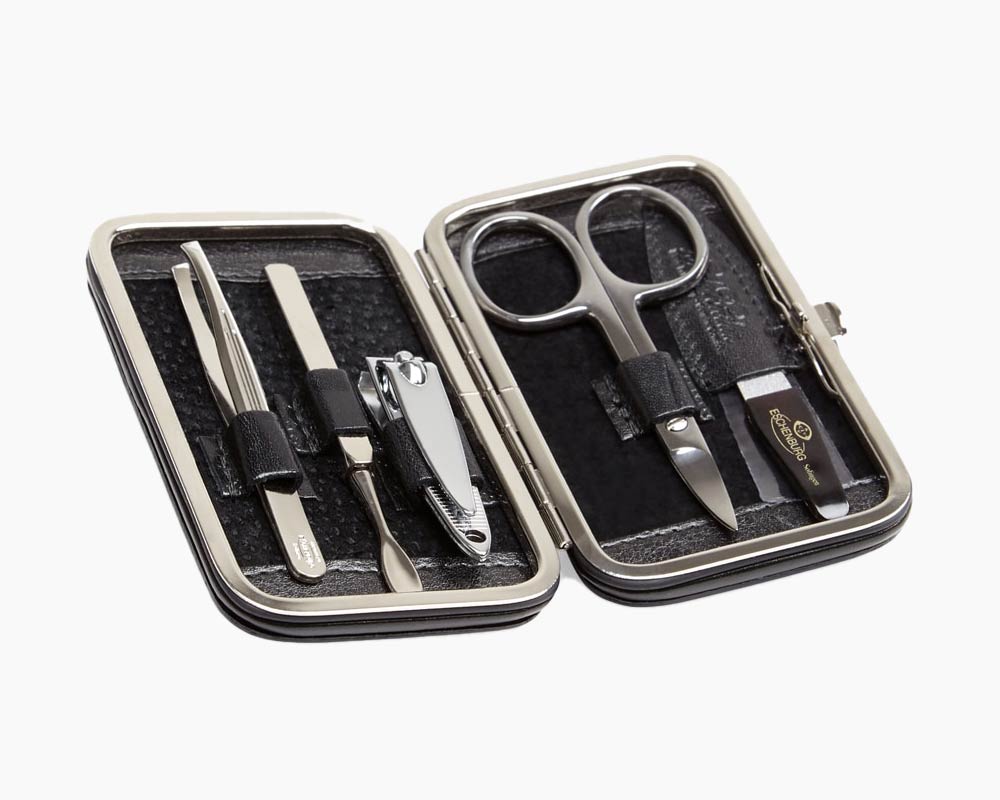 American brand Brooks Brothers knows all about making guys look good, from clothing to footwear and right down to their nails. Brooks Brothers has a couple of manicure sets: a small and a large, with the smaller kit being presented in a leather case with suede lining. You get six tools included, with the nail scissors doubling up as cuticle scissors too.
Shop Now 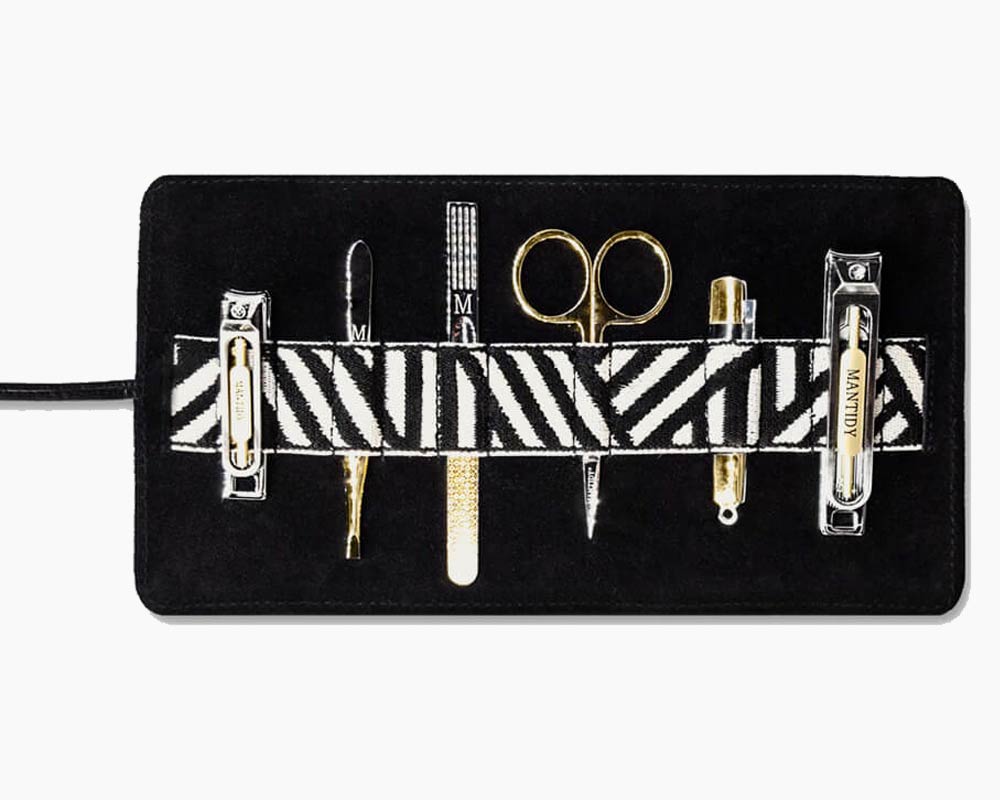 London-based Mantidy was founded to be the only brand guys need to hold all their essentials in one place. Whether it's cables, chargers, toiletries or anything else you need when travelling, Mantidy has a solution.
This six-piece carbon-steel manicure set includes two pairs of nail clippers, scissors, file and a cuticle pusher, all housed in a leather and suede roll-up case. Extra detail is provided by a handwoven elastic strap to hold the tools in place.
Shop Now 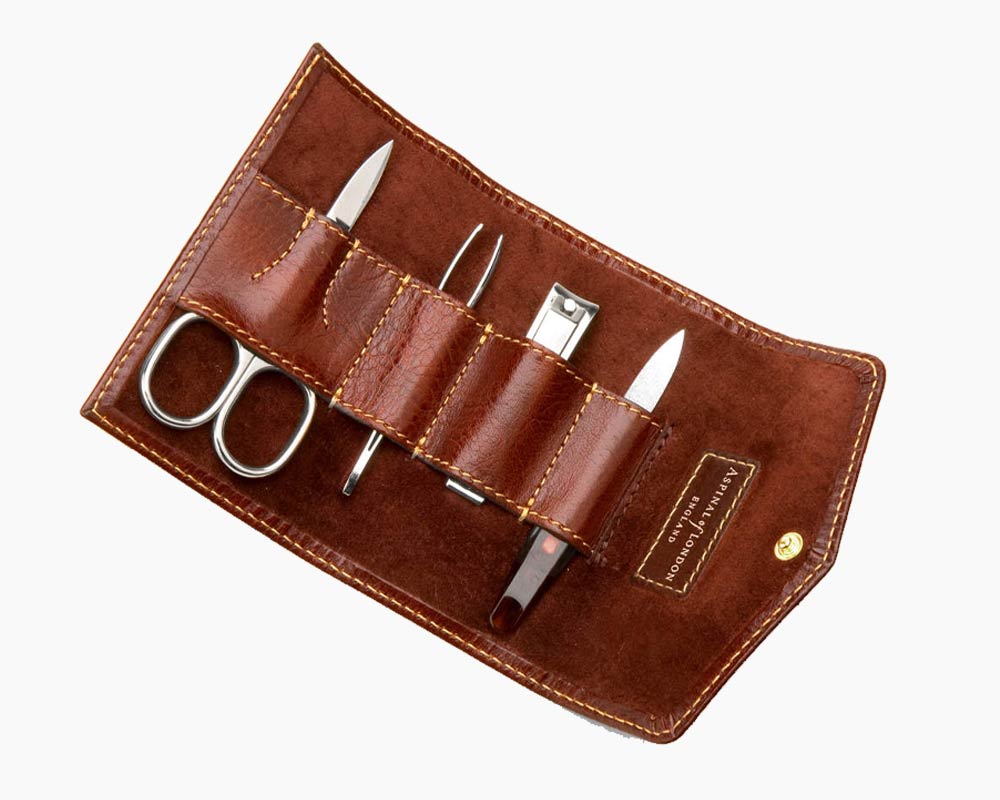 British purveyor of luxury leather goods Aspinal of London started life striking up partnerships with museum gift shops, being a supplier of notebooks and other leather accessories. Proving popular, the brand expanded into other leather goods, all with a distinctly British flair.
This manicure et is presented in a case made from English bridle leather with a suede interior, where you'll find four German-made tools: scissors, clippers, tweezers and a file.
Shop Now 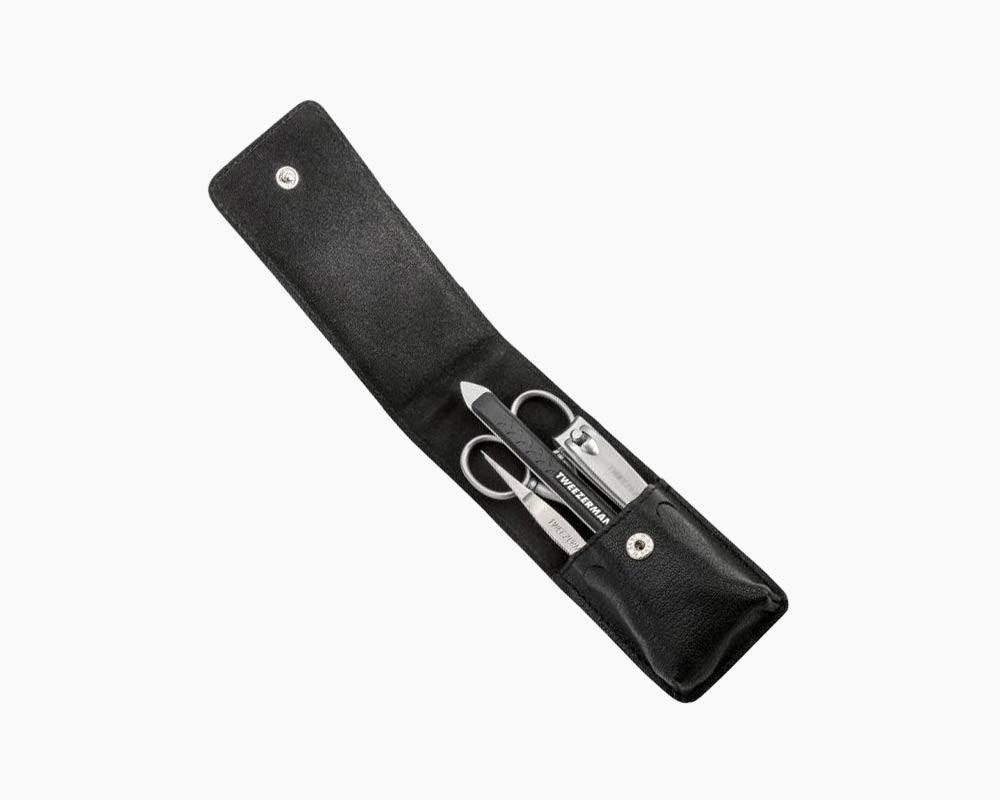 Essential by (product) name, essential by nature, this four-piece kit from Tweezerman has the basic necessities for the quest to better-looking nails. Tweezers, clippers, scissors and a multi-use tool that include a file, you no longer have an excuse for poor nails.
Shop Now 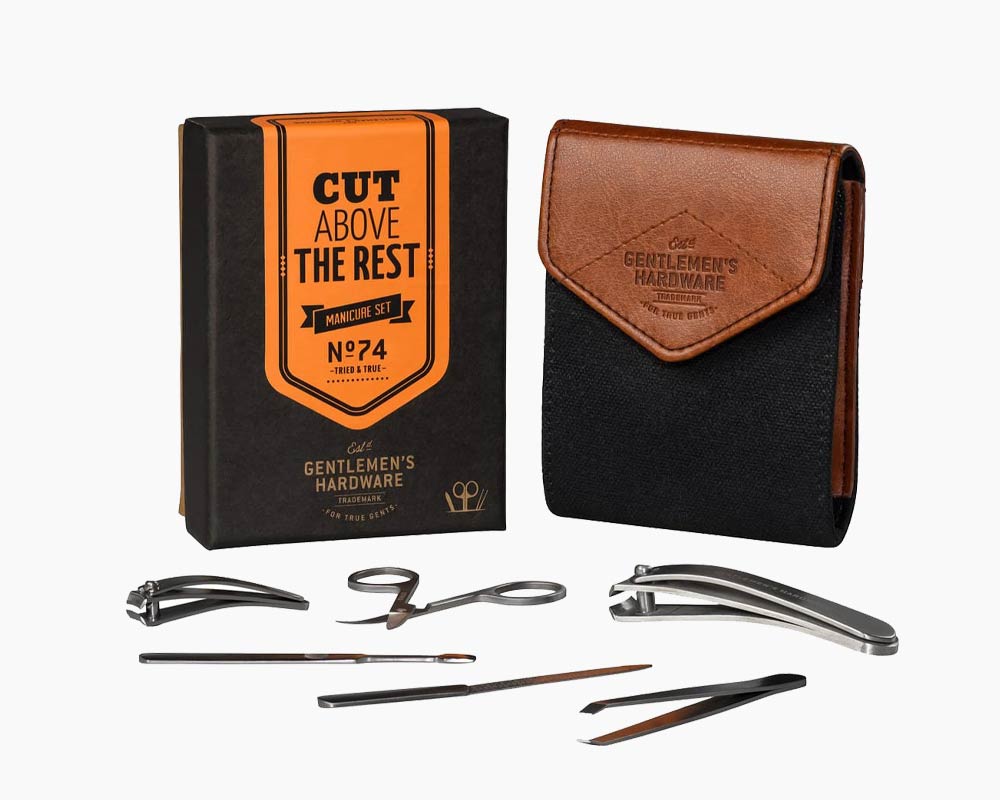 Department store favourite and perfect brand for seasonal gifting, Gentlemen's Hardware produces many of the things all guys need in simple and affordable packages.
Take this manicure set for example, you get two pairs of nails clippers, tweezers, a nail file, cuticle pusher and cuticle scissors for less than $25.
Shop Now 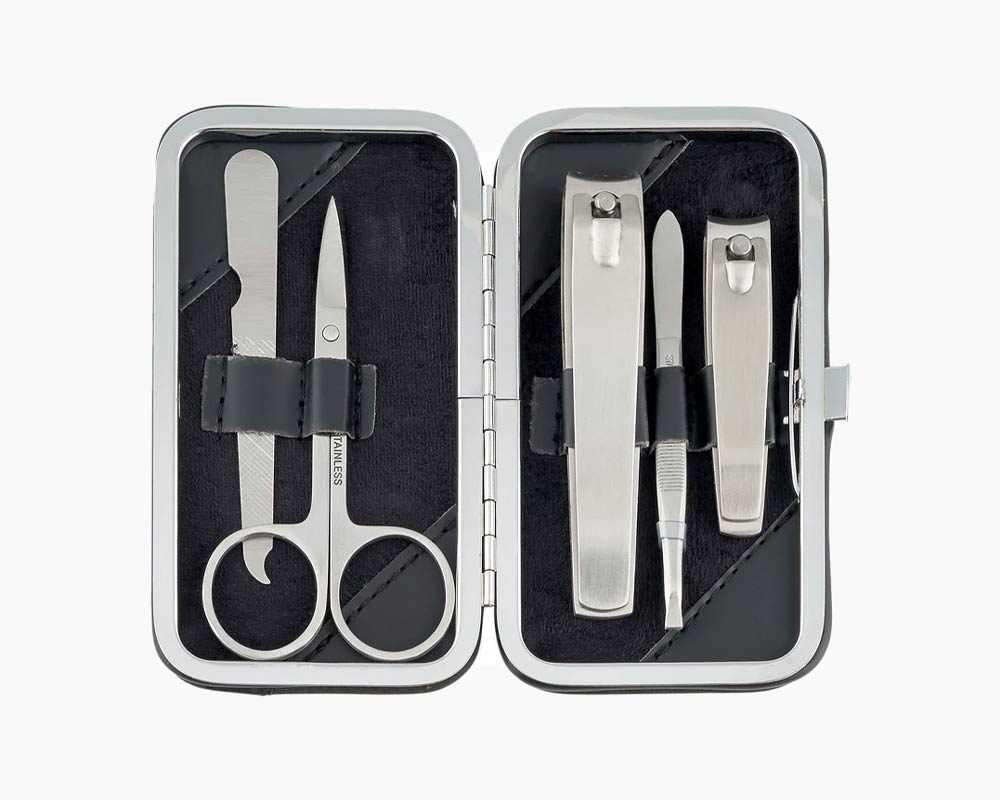 Rockwell Razors is a shaving brand first and foremost, but with such a strong connection to male grooming, it's no surprise the brand has taken it upon itself to look after all aspects of a man's appearance, which naturally includes the nails.
Rockwell's 5-piece kit includes separate clippers for fingers and toes, scissors, a nail file and a pair of tweezers, all made from high-quality steel.
Shop Now 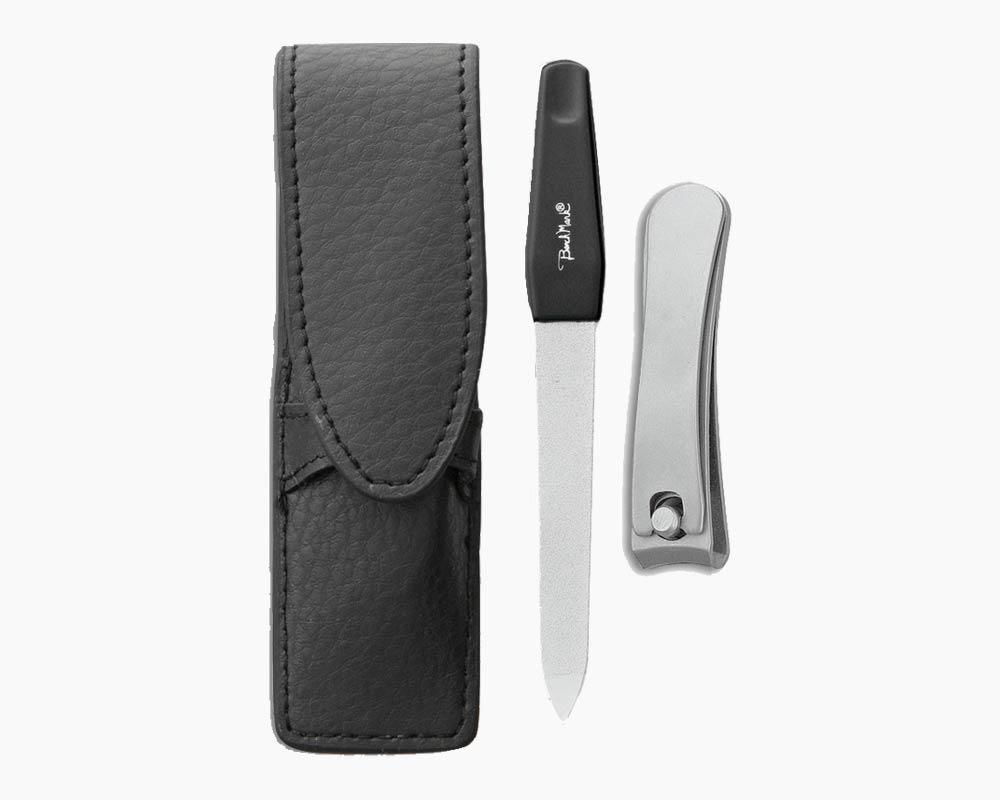 You might not always want to carry a complete manicure kit around with you, instead simply being able to rely upon the basics. This two-piece kit from Benchmark is ideal then, giving you a pair of clippers and a nail file, both of which can be kept together in a leatherette case.
Shop Now 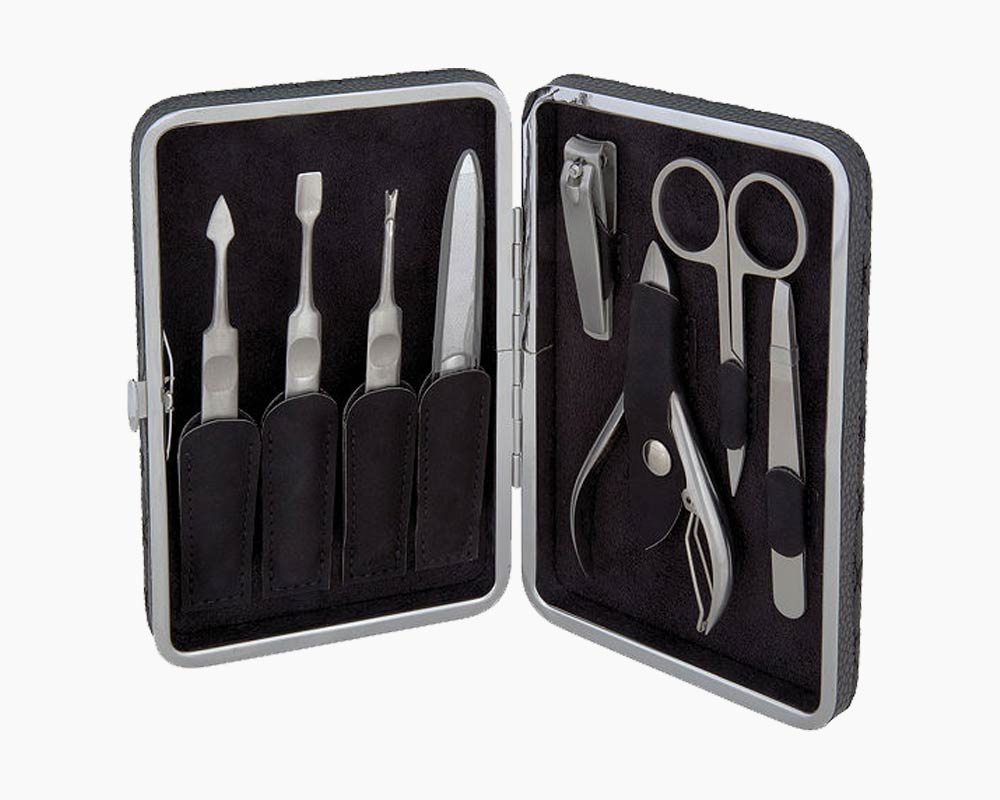 Dodgy-looking nails will most certainly be a thing of the past with this eight-piece kit from Kingsley. With a pair of scissors, tweezers, clippers, nippers, a file and three different cuticle pushers included and stored in a faux-crocodile case, you'll be able to fine tune and trim your nails to precise proportions.
Shop Now 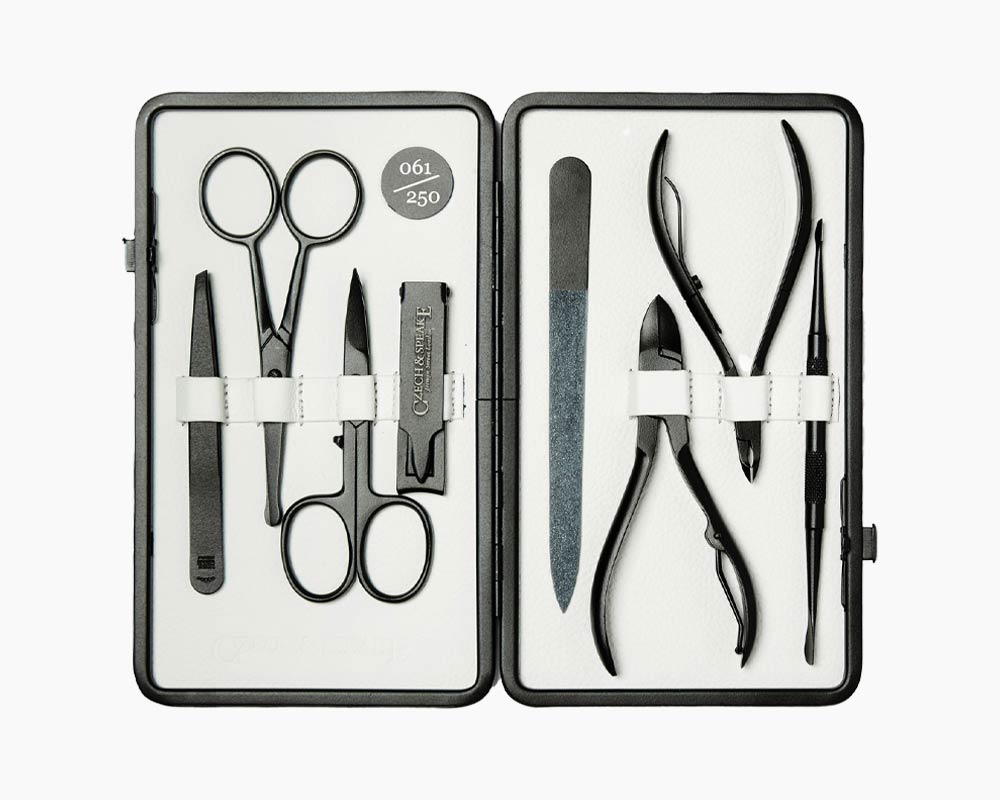 A Mr Porter exclusive of just 250 sets, this manicure kit from high-end men's grooming brand Czech & Speake is on the pricer side of manicure sets, but for your money you're getting eight tools all crafted from incredibly high-quality materials and hand-made in Germany. They're Teflon coated too, which works to greatly extend their lifespan and magnets keep the tools in position in the case.
Tools include safety and nail scissors, clippers, file, toe nail clipper, cuticle nipper and a double ended cuticle pusher.
Shop Now 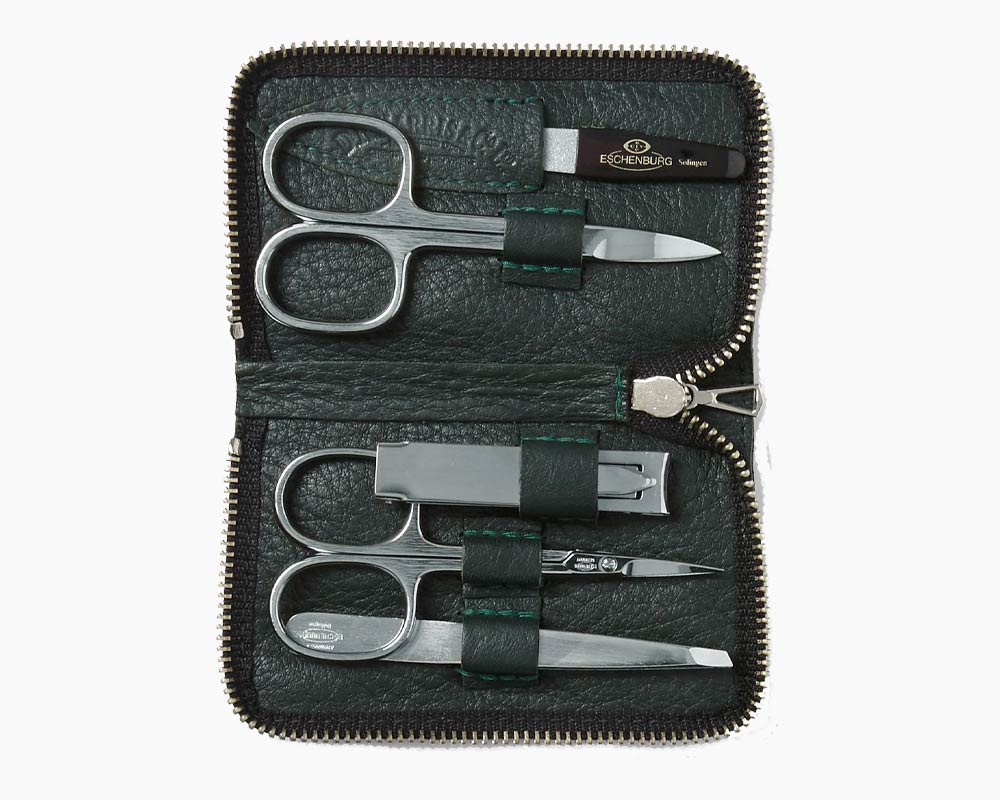 Official chemist to Her Majesty the Queen, D R Harris is a brand of distinction, quality and heritage. Specialising in products to help guys smell and look their best, including fragrances, creams and soaps, the company also has an extensive range of accessories and smaller items to complement.
This five-piece manicure set manicure set comprises tools sourced direct from Germany and include nail and cuticle scissors, clippers, cuticle pusher and a file, and ar e presented in a zip-up grained-leather case.
Shop Now 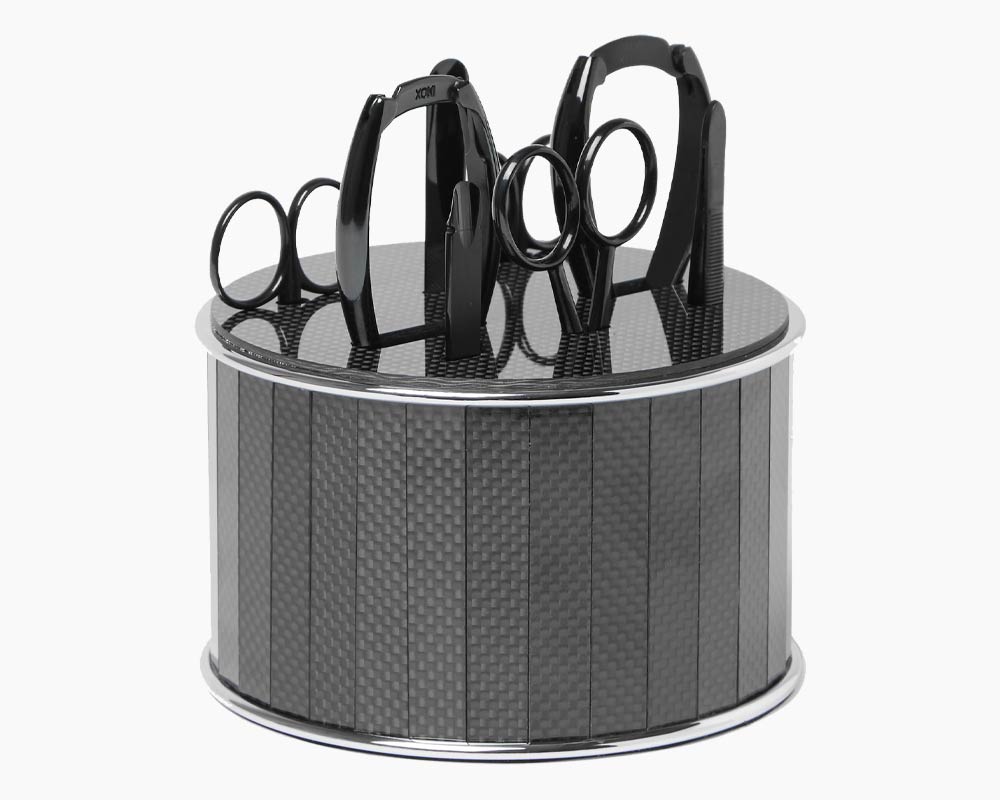 If you desire, nay, need only the finest things in life then you'll be bowled over by this stainless steel and carbon fibre manicure set from Bamford Grooming Department.
Bamford is already known for its suave and sophisticated grooming products, and this manicure set is no different. Cuticle nippers and scissors, a nail nipper, file, cleaner and scissors, tweezer and safety scissors are all made from stainless-steel and given a matte black finish, and are presented in a carbon fibre pot. Expensive, yes. The ultimate bathroom accessory? Also yes.
Shop Now