Ranking movies or TV shows is easy compared to more traditional art. There are a finite amount of sci-fi TV shows and movies you can watch, but pop culture art is damn near infinite. Every sliver of the internet is chock-full of it, not to mention the professional galleries, poster companies, on and on.

With the caveat that we surely missed a ton of great stuff, here are just a few pieces of the undeniably coolest pop culture art released in 2016, in no particular order. 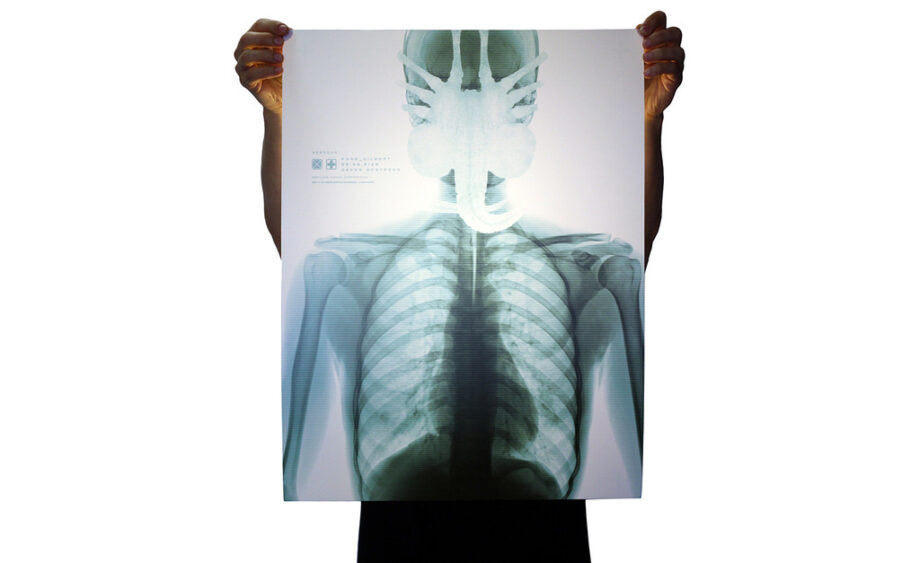 From a straight visual standpoint, this is a good-looking image. Beyond that, the fact it's printed on a paper that makes it look and feel like an x-ray just pushes things over the top. Any art that can double as a medical record is ok in our book. 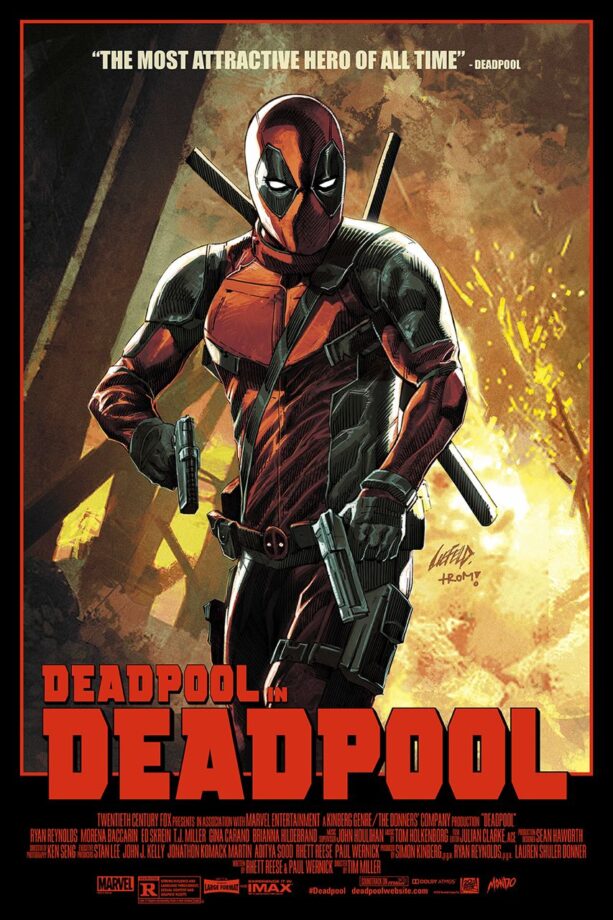 If you've got to have a Deadpool poster, who better to make it definitive than the man who co-created him? 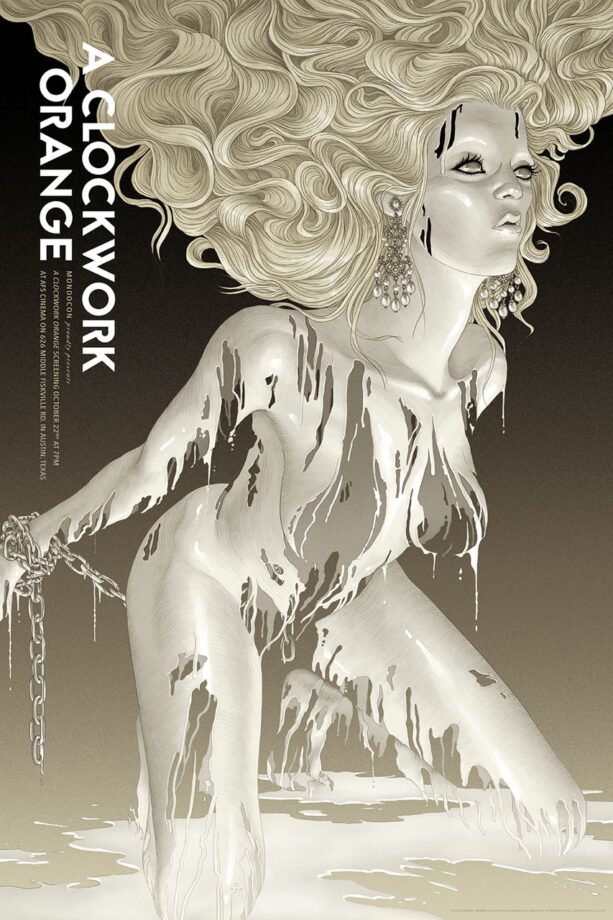 A Clockwork Orange by Rory Kurtz

This image is shocking and that's precisely the point. What better way to immortalise the Stanley Kubrick classic than to challenge the viewer like this piece does? 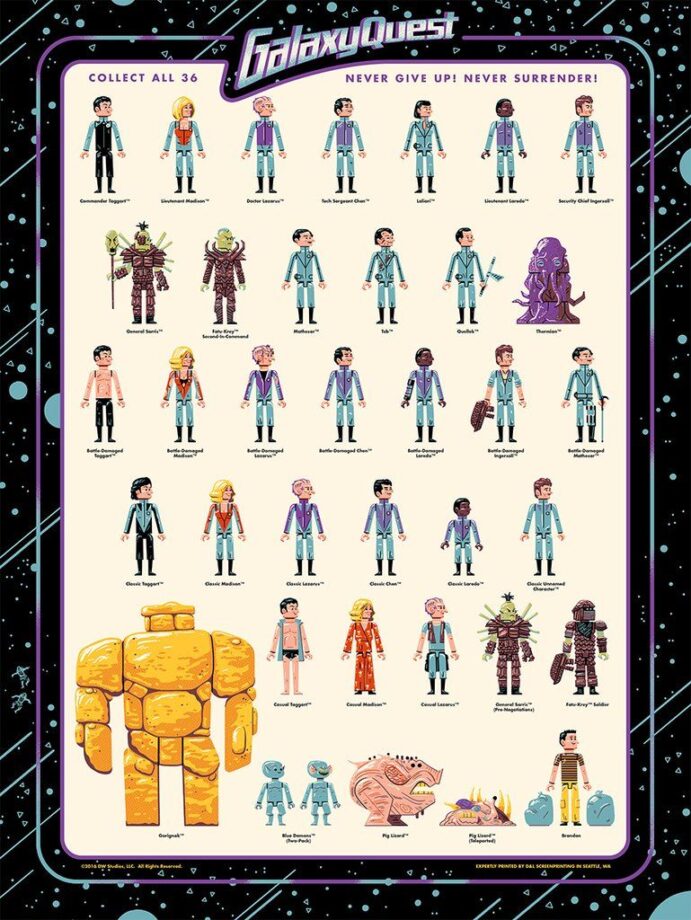 Galaxy Quest is a movie that always, always needs more love, and I can't think of a better way to pay tribute than with this poster that views it than as an imaginary set of toys. 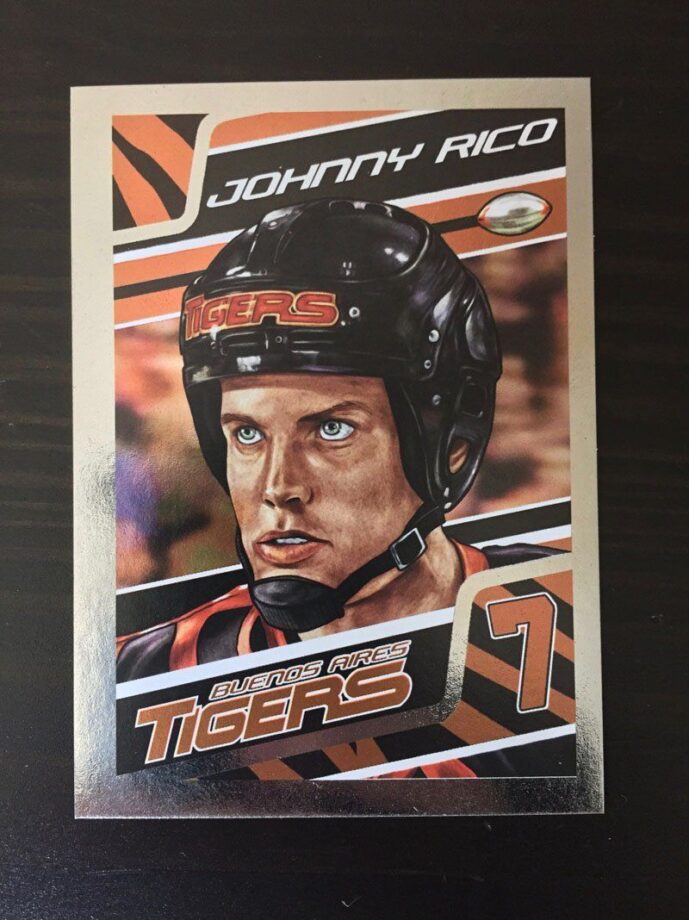 This works on so many levels. You've got a two-sided, reflected baseball card of a character in Starship Troopers who only plays the sport in question for a few minutes. Either you get this and love it and don't, and don't. We're in the former. 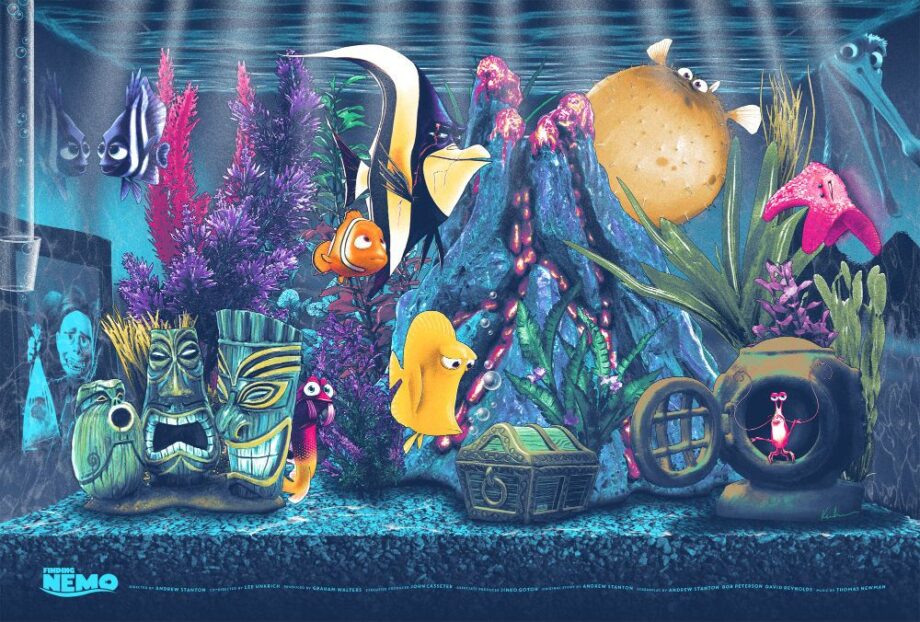 At first glance, this is a relatively straightforward image. You've got great characters in a fantastic movie, all together in a recognisable scene. But now think about what it looks like in a frame. Yup, your very own fish tank. Perfect. 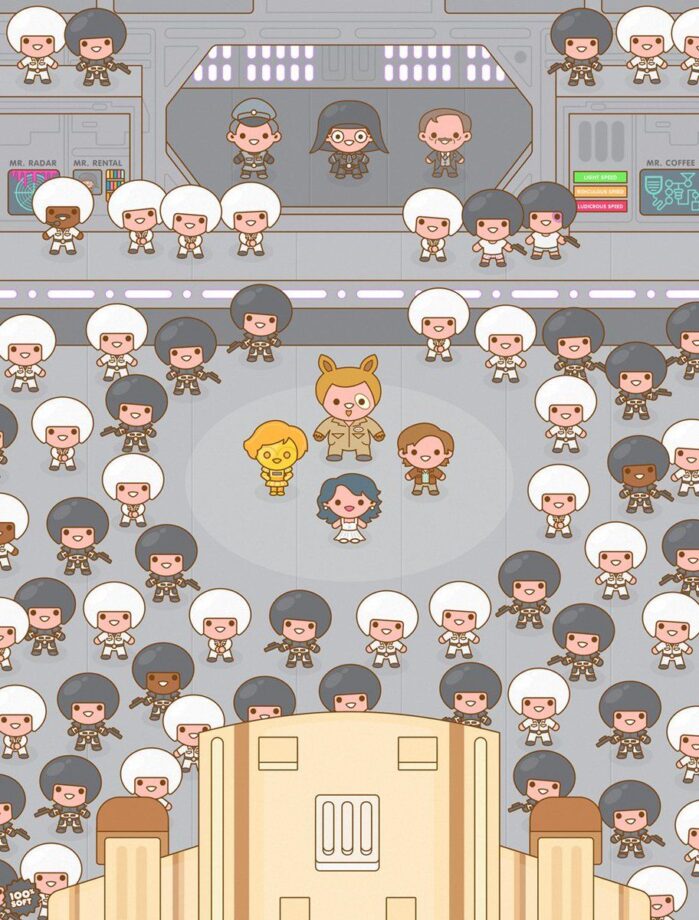 Like Galaxy Quest, I can't get enough Spaceballs art and what's great about this one is that it's an exact copy of A New Hope piece, by the same artist, from the year before. Which makes it even better. 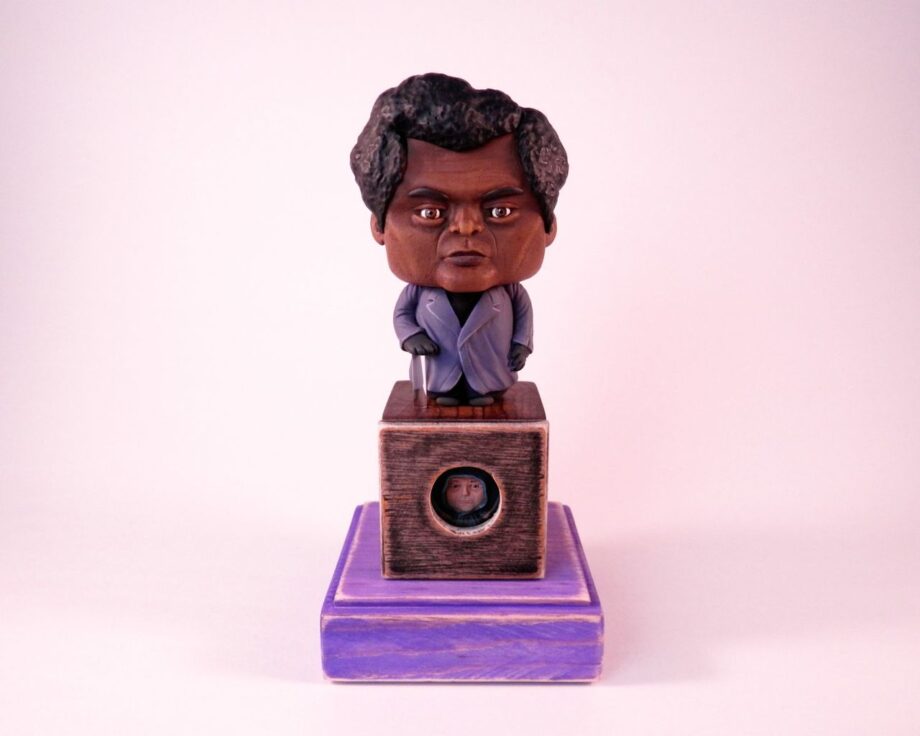 This is a bit of a cheat, as it's a one of a kind sculpture, but I just find it — and Hill's work — so incredibly unique, I had to include it. Plus, you never see Unbreakable stuff.

"Hope Is Not Lost Today, It Is Found"

Though there's another, also beautiful version, of this piece, the variant captures a moment that's not in The Force Awakens, which gives it a slight edge. It's a moment we can imagine. The moment where Luke realises someone has finally found him. 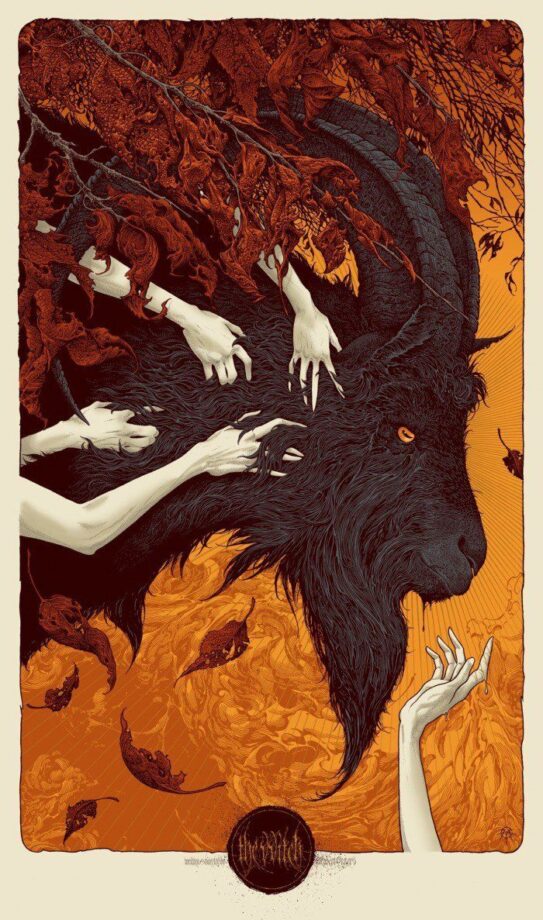 The Witch by Aaron Horkey

Pop culture artists made a bunch of gorgeous art based on The Witch this year, but Horkey's stands out. It's not instantly recognisable as being from the film, but as you look at it more, the detail continues to pop out. Just like the film itself. 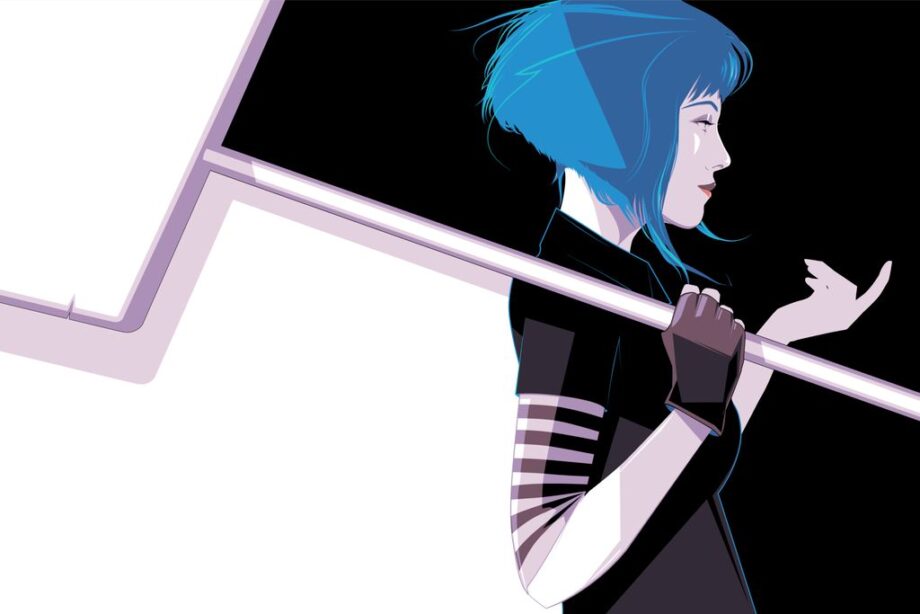 No one is cooler than Ramona and with this piece, you get her in all her glory, through a clean, video game inspired aesthetic. 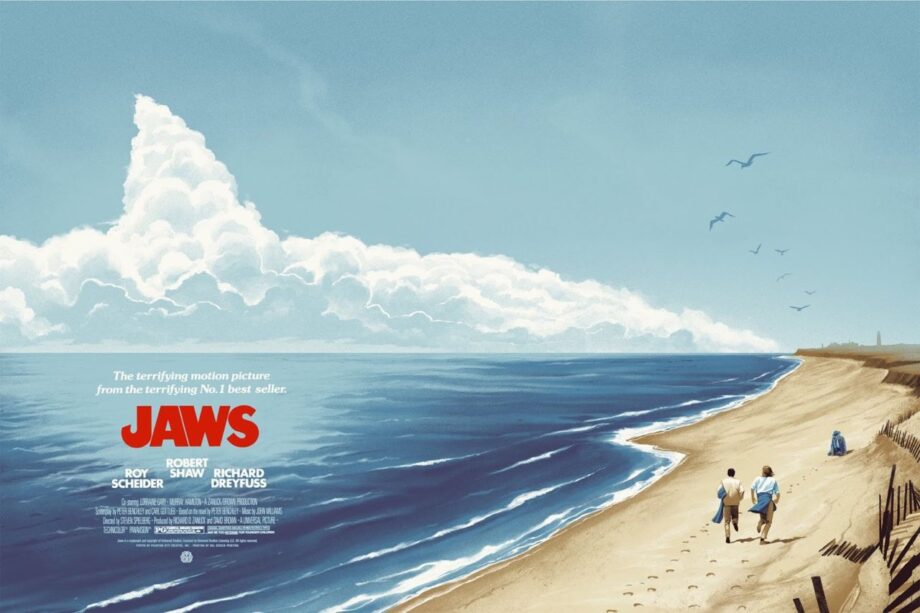 There are lots of great Jaws posters out there, and here is another one to add to the pile. It's one of those posters that has a lot going on in a very simple concept that it's simply a joy to look at. 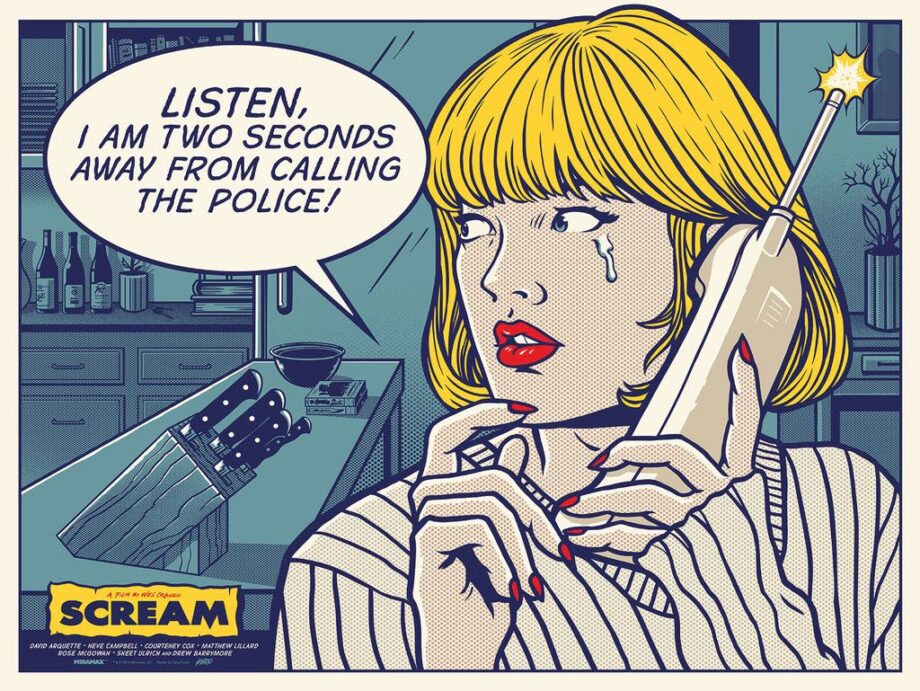 Roy Lichtenstein would be proud of this homage to a movie that itself an homage to the great horror films that came before it. Meta and wonderful. 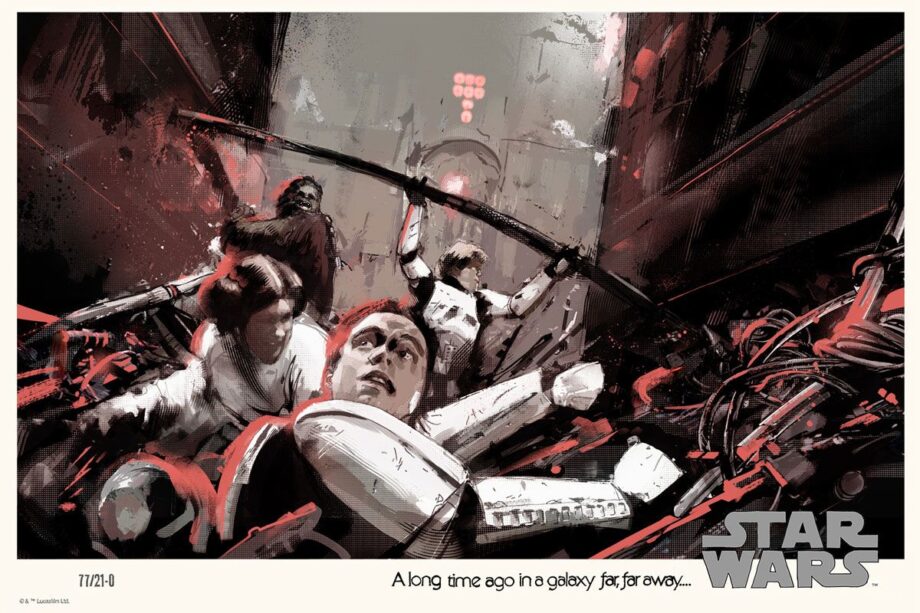 Into the Garbage Chute, Flyboy Variant by Jock

Each and every one of us has seen hundreds of posters for Star Wars. But have you ever seen one of this scene? Or a better representation of this scene? I doubt it. 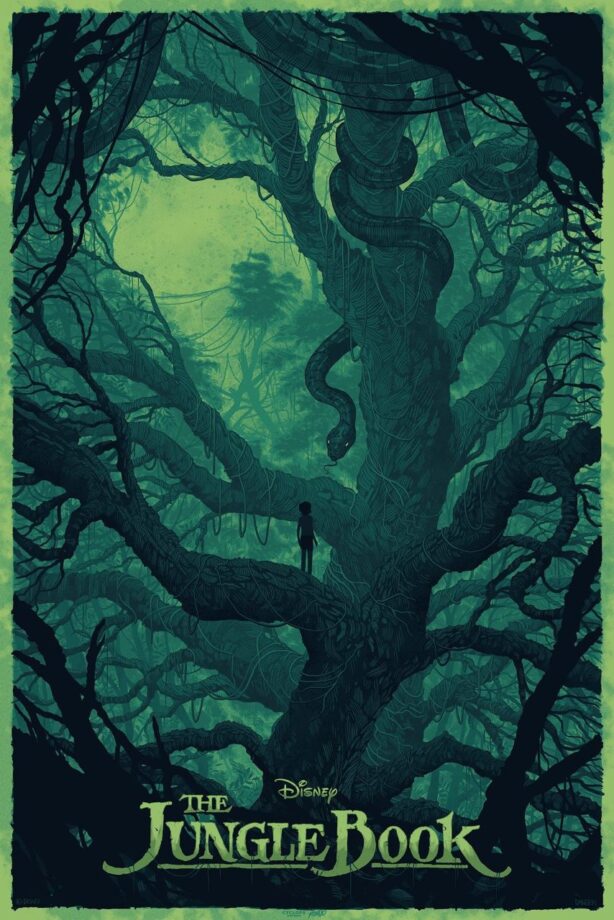 The Jungle Book by Daniel Danger

One reason why Jon Favreau's live-action Jungle Book worked so well is that it wasn't afraid to go dark. Same can be said for this poster, which captures the tone of the movie in a wonderful way. 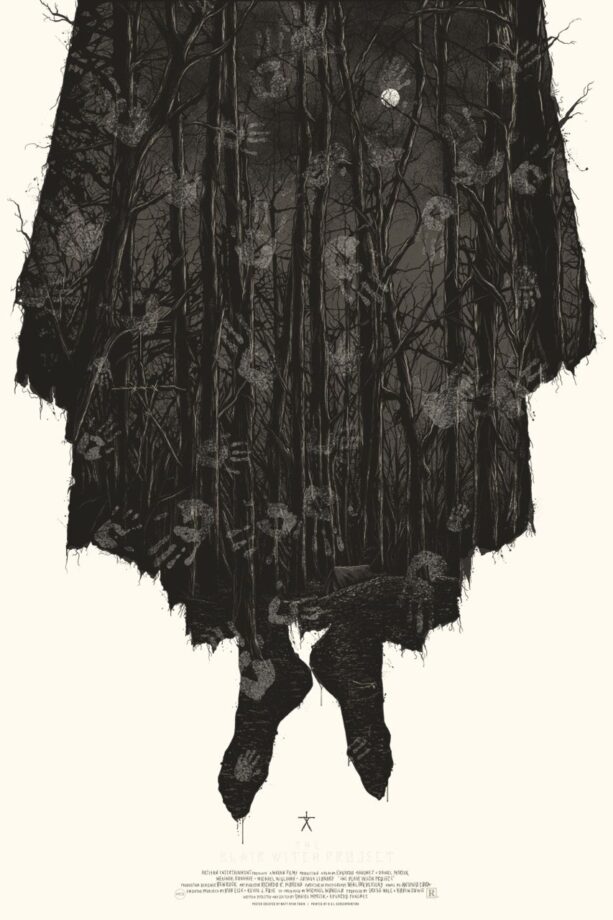 Digital images don't do this poster justice. Different inks add several creepy layers and winks back to the iconic film, making it a poster for a scary movie that's also kind of creepy itself. 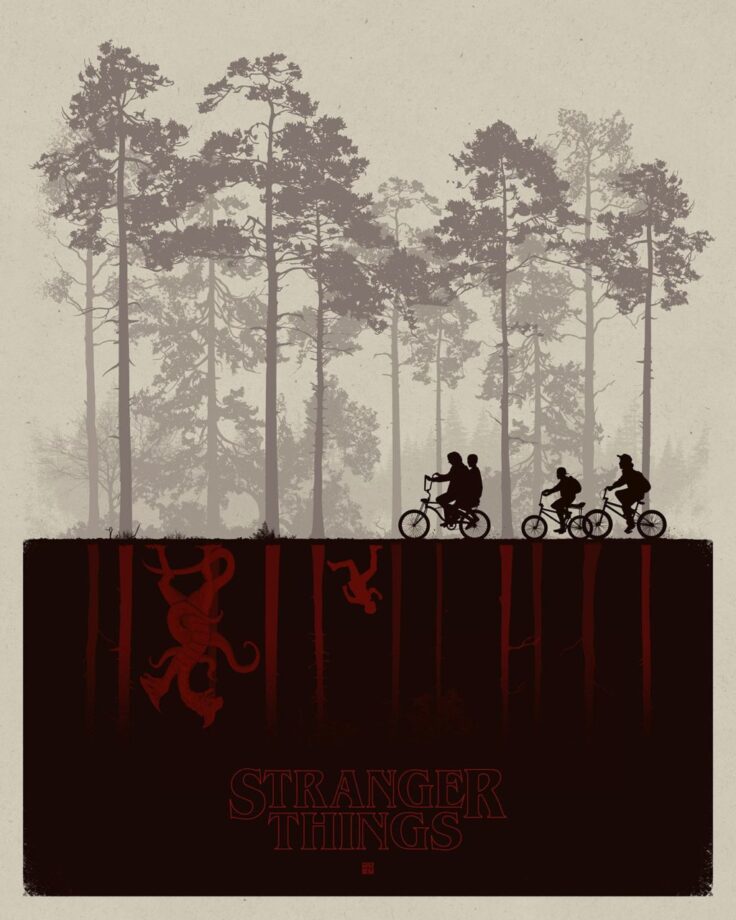 Almost everything you want to say about this year's hottest new show show is captured here in vibrant simplicity. There are kids, there's an upside down, it's rural, timeless, and awesome. 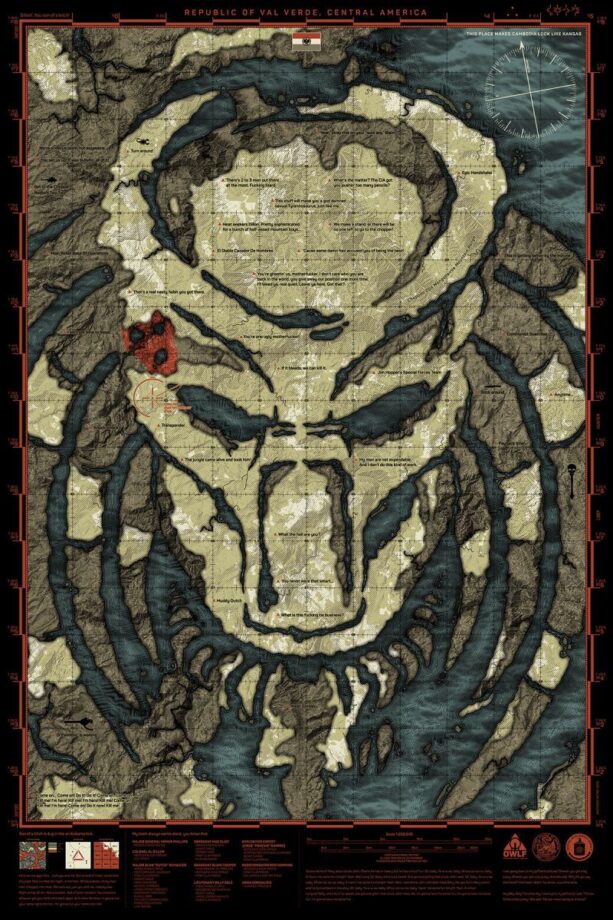 As a Predator poster, this strong central image combines with tons of little nods to the film in a very cool way. But, what makes it even better, is it was printed with heat sensitive inks, so it changes colour when you touch it. 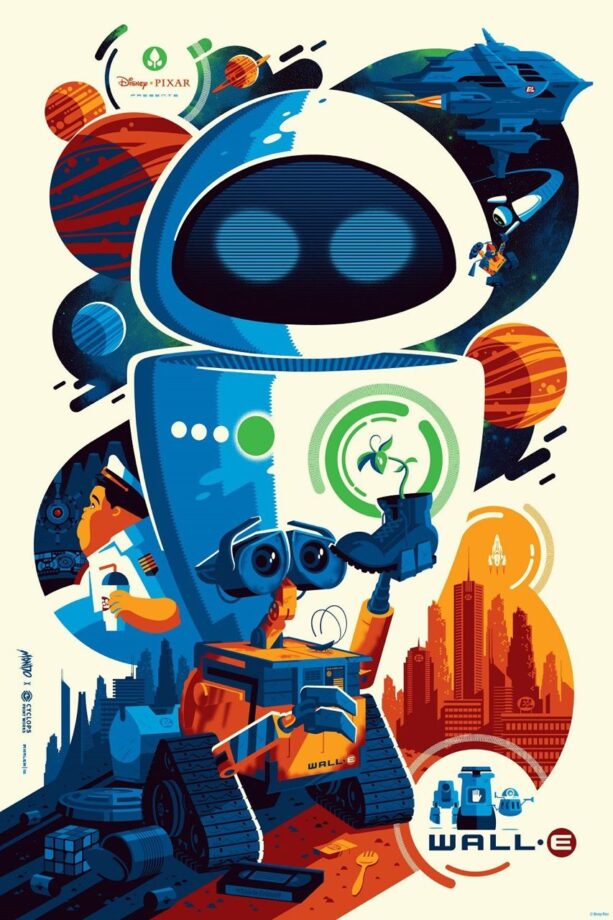 Whalen's bright, geometric style lends itself so well to Disney's films and in particular, the way this poster pops with life and character makes it stand out. 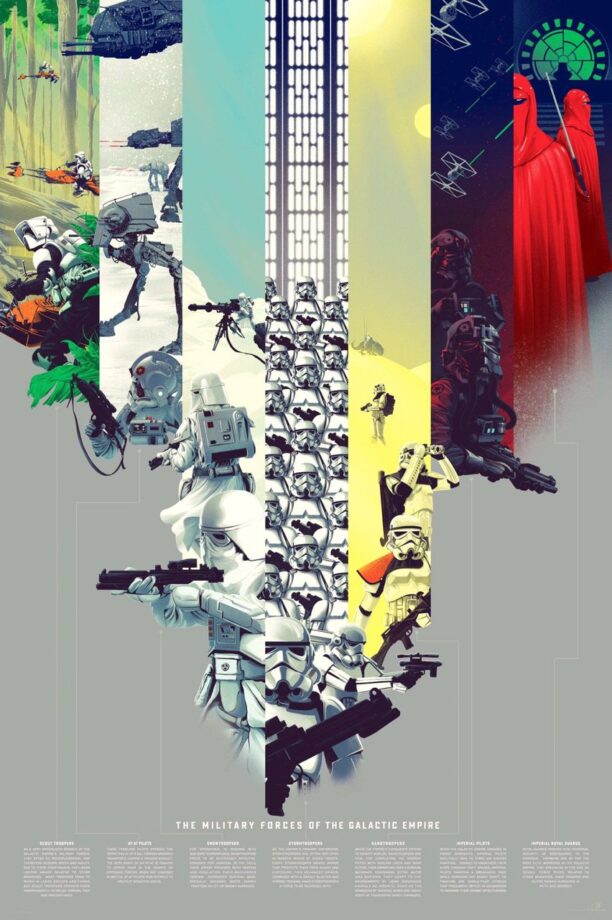 The Military Forces of the Galactic Empire by Kevin Tong

Aesthetically pleasing? Check. Packed full of geeky information? Check. Subtly a really great poster for one of your favourite movies of all time? Triple check. 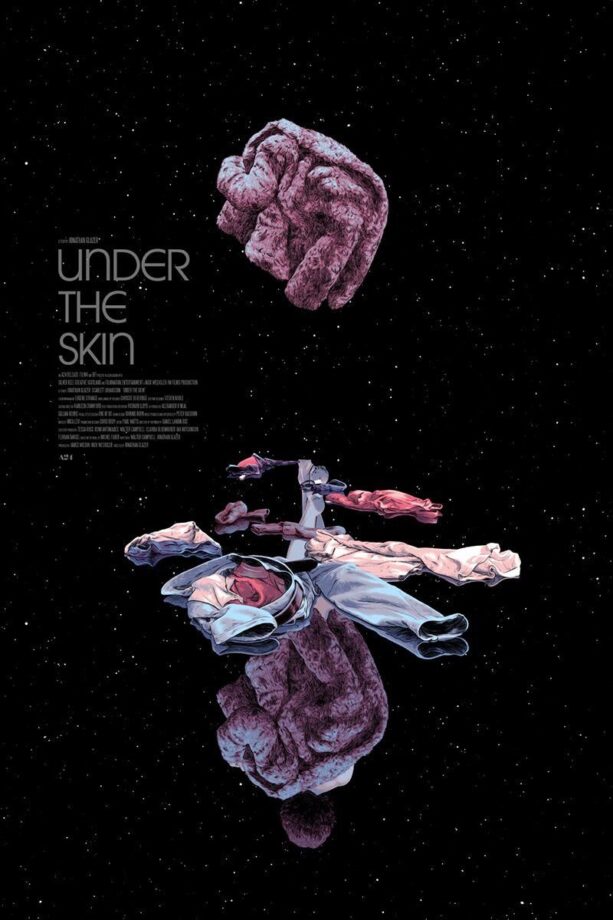 Under the Skin by Ghostco (Matthew Woodson)

Much like the eerie sci-fi movie it's based on, this poster is something you can't take your eyes off of. It's also tricky in its simplicity. 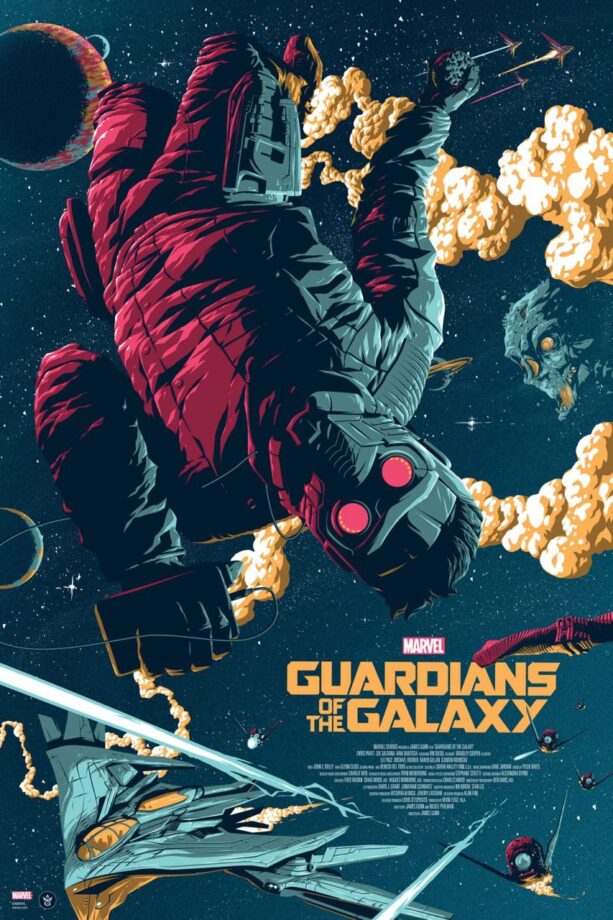 Guardians of the Galaxy by Florey

When you think of Guardians, you think of over the top fun and big bright visuals, right? Well, that's exactly what this poster nails and more. 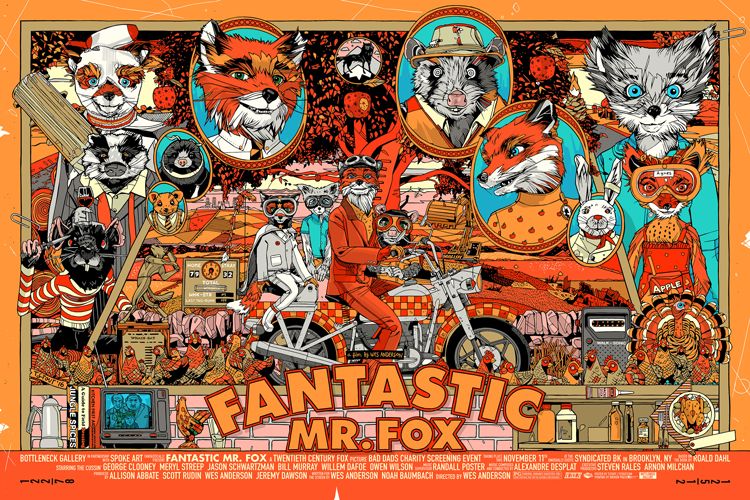 When a movie is as colourful and full of great characters as this Wes Anderson film, throwing all of them and the kitchen skin onto a single poster just works. 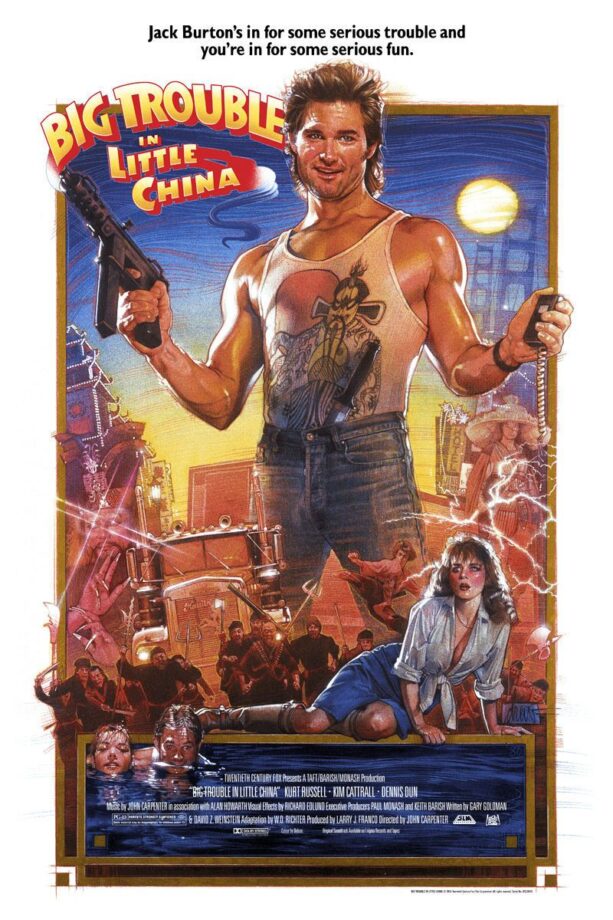 OK, this poster has been out in the world for almost 30 years, but this was the first year you could get it as a limited edition screenprint. Which gives us a chance to once again bask in all its glory.