Perfect your eye for style. 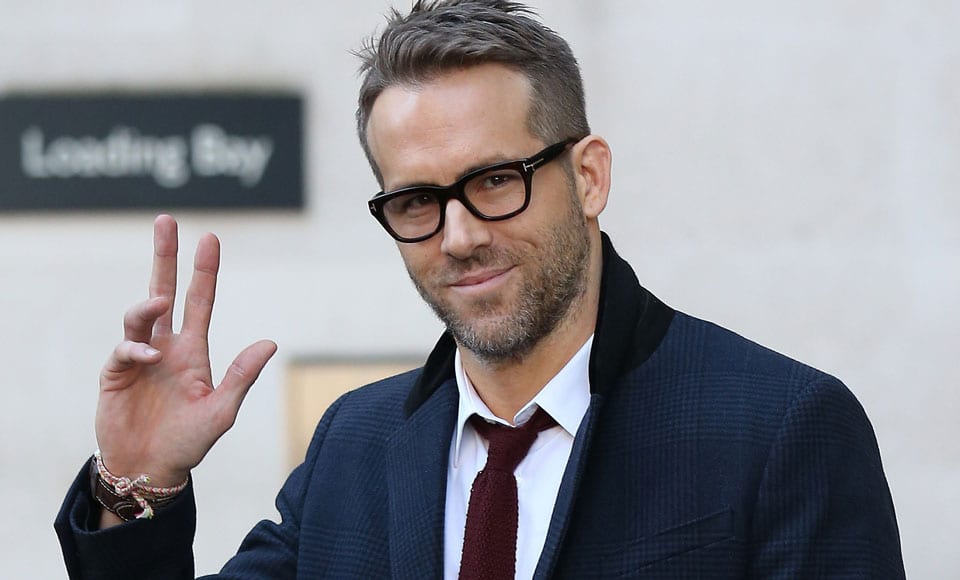 You can certainly say a lot about the character and image you want to portray just from choosing the right pair of glasses. Whether you’re looking for a neat and sophisticated look to accompany your tailored attire, or bolder, large rims to bring together a more creative ensemble, there’s a lot to consider when choosing the right pair to buy.

Back in the day, we were led to believe that the person wearing the glasses was the geek, the ugly duckling, the social outcast. How times have changed.

Move forward to today and you’ll come across people with 20/20 vision throwing on a pair. Why? Because they look so darn good – whilst making you feel stylish and confident.

There are three major things to consider when purchasing your next pair of reading frames, all of which are equally important. Do they complement the shape of your face? Are they practical (nobody wants big, heavy readers)? And are they going to work with what you wear?

Think denim shirts, suits, hoodies, bomber jackets, swimwear and everything else under the menswear vernacular.

With a whole range of different constructions, materials and price range on the market, we’ve gone over some of the best brands and sites that are nailed on to elevate your style. But first, a quick lesson in framing.

Reading glasses are constructed from a range of materials that depend on the designer’s intended audience, budget, and the anticipated lifestyle of the wearer. Plastic and metal are the most common, but hybrid and natural alternatives are growing in the market.

Additionally, many metal frames are flexible and easily adjustable (such as flexon memory metal and beryllium) and can be combined with acetate to conform to the shape of the wearer’s head. Metal frames also resist corrosion and maintain their colour better than plastic. They are, however, more expensive than mass-produced cellulose frames, and can pose an allergy risk to susceptible wearers.

The everyman of eyewear. Plastic frames – made from TR-90, polymer, and other synthetics – are exploding in popularity. These are usually (but not always) created through an injection molding process. This involves heating the plastic into a liquefied solution, then pouring the plastic into a predetermined set to construct the frame.

This process is quick as lightning and cheaply facilitates mass-production. Unlike acetate frames, plastics are sprayed or painted and thus lose their colour easily, especially with robust wear. However, they are favoured for everyday-wear as they are lighter than other frames and don’t obliterate any your spending account in the process. Plastics are overtaking metal frames on the market for these reasons and their market share has adjusted accordingly.

Although acetate is a form of plastic, its omnipresence in eyewear warrants an entry of its own. Acetate is derived from renewable cotton and wood semi-synthetics. Although the process depends on the designer, acetate is usually created by reforming the plastic (through heat or compression) into molded blocks, then laminating it into sheets that are then hand-cut into frames. Acetate offer a number of benefits to opticians.

They are generally more flexible, and can be crafted into different shapes. Acetate frames and stems can be coloured efficiently, which doesn’t corrode with time or sun exposure. Acetate is also hypoallergenic, helping you save face (literally) from the potential embarrassment of a nasty reaction to the frame materials. They might be pricier than other plastics, but they’re universal for damn good reasons.

A recent (and trendy) entry on the market, wooden frames sit outside the normal hierarchy of eyewear. Wood frames are lightweight, flattering on most complexions, and ethically sourced. Bamboo frames, for example, don’t require the use of environmentally corrosive products such as plastic or petroleum derivatives, making them an eco-friendly option. Brands that offer these frames also like to remind customers that bamboo is bio-degradable and regenerates quite easily.

For environmentally-conscious shoppers, therefore, they’re an excellent alternative that is becoming more a solid competitor to acetate and metal frames. They can even be lighter than featherweight plastic frames, making them a solid choice for prolonged wear.  They are, however, delicate and don’t tolerate the punishment you can subject to metal eyewear (so learn from your clumsiness and don’t sit on them).

Tortoiseshell frames are advertised everywhere, but there’s more to them than meets the eye.  Today, brand descriptions refer to the colour – not the construction itself. Today, ‘Tortoiseshell’ frames are no longer constructed from real tortoiseshells, due to obvious ethical implications. After a prolonged uproar, they’re now made from acetate or other plastic derivatives.

Designers modify the stem and frames through various processes to achieve the artful discolouration, and thus replicate the unique patina that made tortoiseshell frames iconic. This provides wearers with the timeless cool of a vintage tortoiseshell frame, without harming innocent sea creatures. Win-win.

As technology rockets towards the future, hybrid frames are taking off. In an attempt to distinguish their collections from the hum drum of mass production, brands are offering cutting-edge frames from proprietary materials – often blends of plastic, metal, and rubber. However, hybrid frames aren’t for budget shoppers. Due to the manufacturing process and cost of materials, they are usually featured in specialist or luxury collections and might discourage the everyday guy from purchasing them.

Ask yourself if metal or acetate can’t do the job before walking into the optometrist without a decent monetary cushion in your back pocket. Composition aside, there are a few key styles that never truly leave the market. Your environment and facial structure will to some extent determine which style works for you. 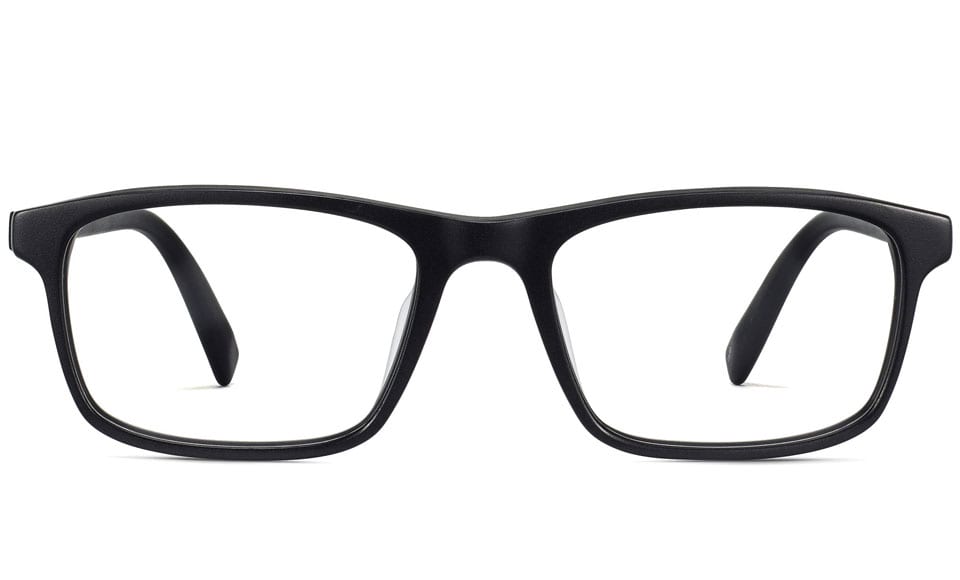 1 of 10
Warby Parker
Born out of necessity for designer eyewear at affordable prices, Warby Parker has produced a killer collection of frames for summer 2019. Their catalogue includes a range of wide and narrow fit gems that can be delivered directly with your prescription lenses. Check out the eye-catching Stockton, Hugo and Burke designs.
Shop Now 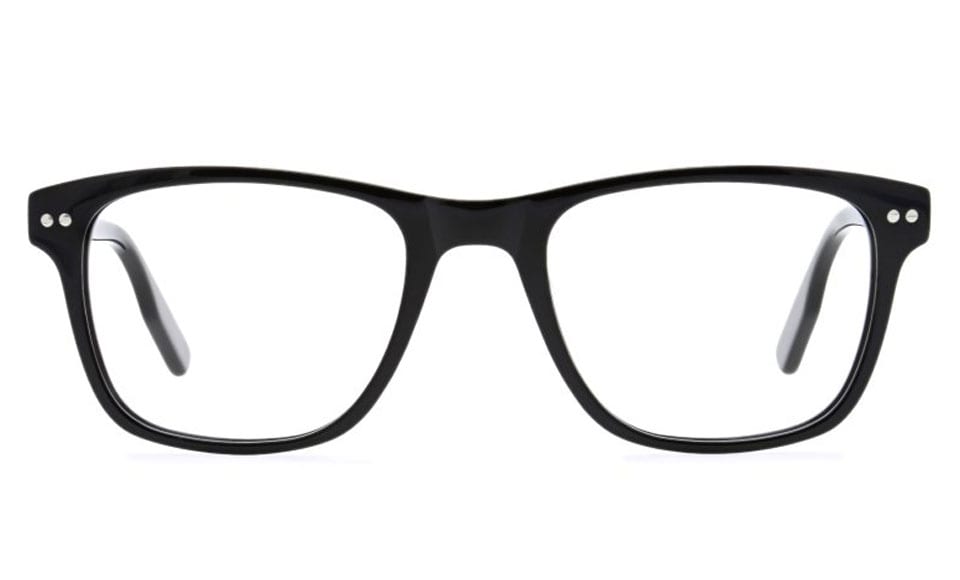 2 of 10
Liingo Eyewear
Set up in 2016, Liingo is relatively new to the market, but their sleek and on-point designs point to a company that has been around much longer. As much about self-expression as they are functionality, their classy minimalist designs are produced with premium polycarbonate lenses that are up to 30% thinner than average eyeglass.
Shop Now 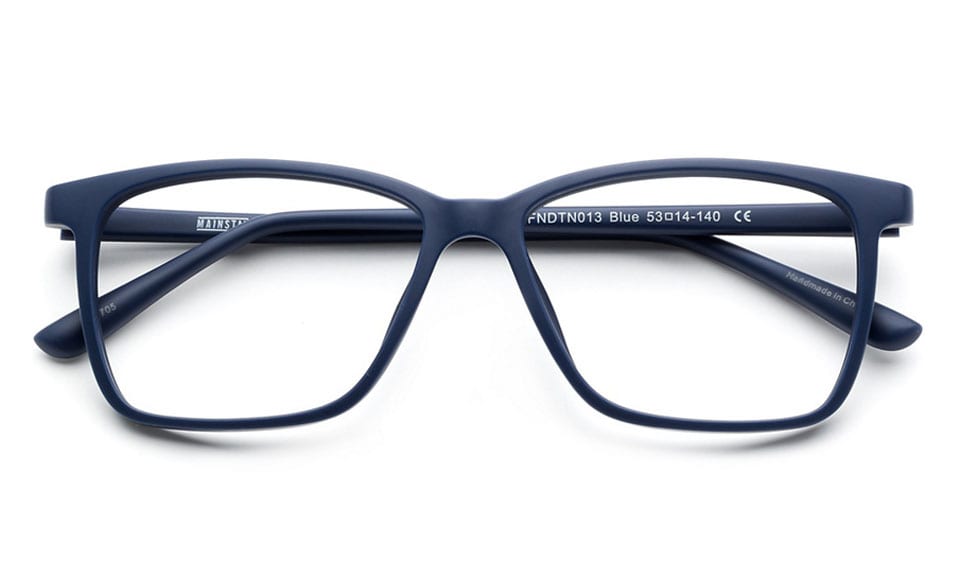 3 of 10
Coastal
Coastal has been around for close to 20 years, but it was only recently that they started to mix their innovative expertise in lens making with designer frame production. Offering the creations of their in-house designers alongside established manufacturers such as Ray-Ban and Emporio Armani, they constantly strive to set trends as opposed to following them. Check out their standout rimless collection.
Shop Now 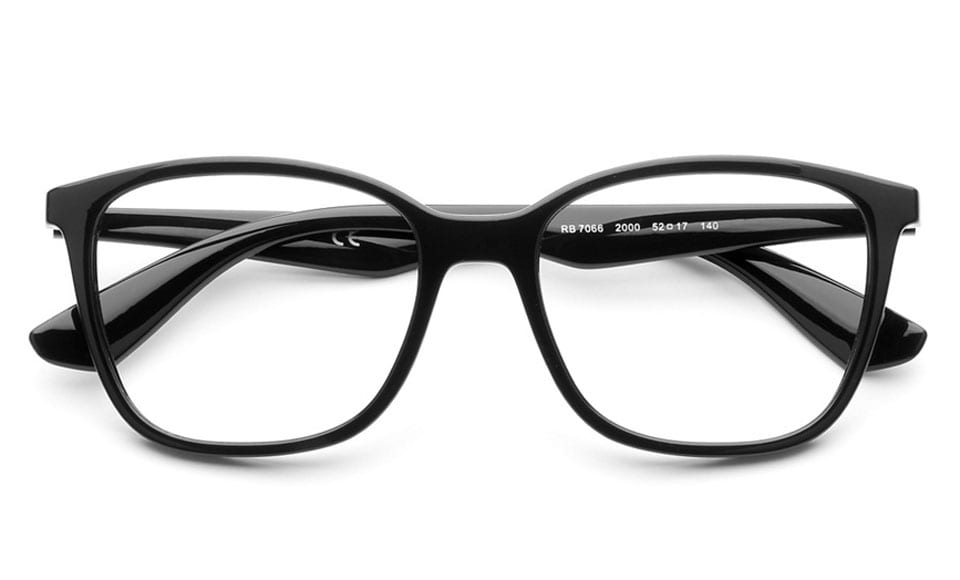 4 of 10
Glasses.com
Whether you’re into geek-chic, retro-inspired and extrovert shapes, glasses.com features some of the best designer frames and lenses around. From Burberry and Starck to Ray-Ban and Ralph Lauren, their range incorporates some of the world’s most iconic eyewear. However, big names come with big prices, so expect the high-end scale of the spectrum.
Shop Now 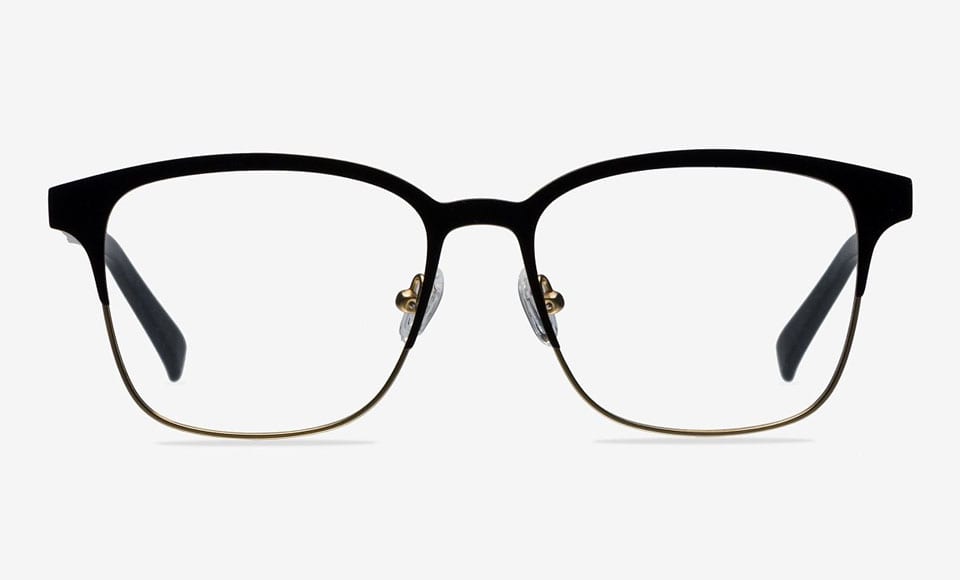 5 of 10
EyeBuy Direct
Eyebuy Direct’s mantra of “accessible, affordable eyewear” has seen them become a global leader in budget specs with a design edge since 2005. They cater to every demographic, but it’s their classic styles that catch the eye. Stand-out frames in their range include the Woodrow, Hemisphere and Sydney designs.
Shop Now 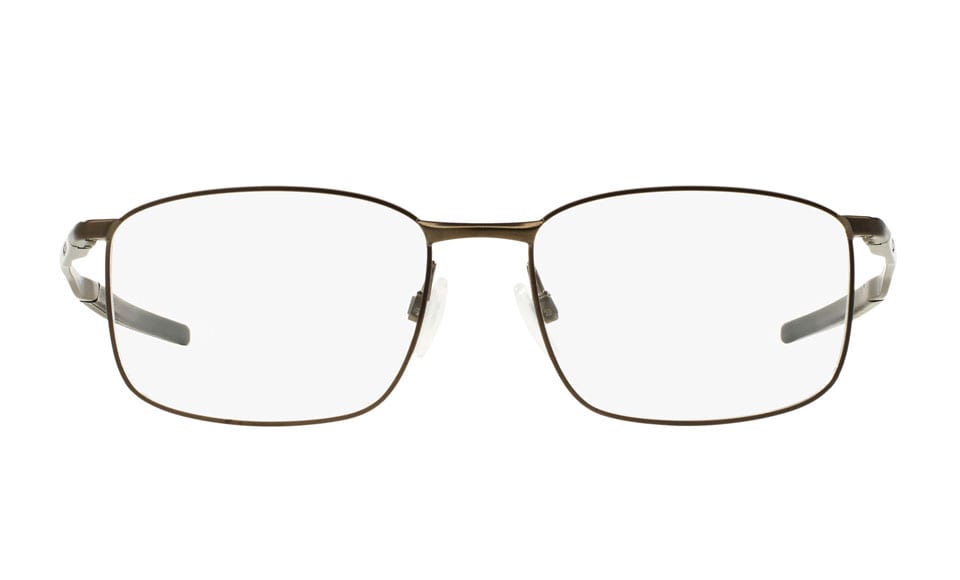 6 of 10
Oakley
Oakley has it in spades. Providing quality designs for lifestyle, sport and just about any other situation you wish to wear glasses. Constantly reinventing the wheel in the world of eyewear design, their frames are timeless - and their products exude style. Couple that with their optical lens innovations and you see why they’ve been at the top for so many years.
Shop Now 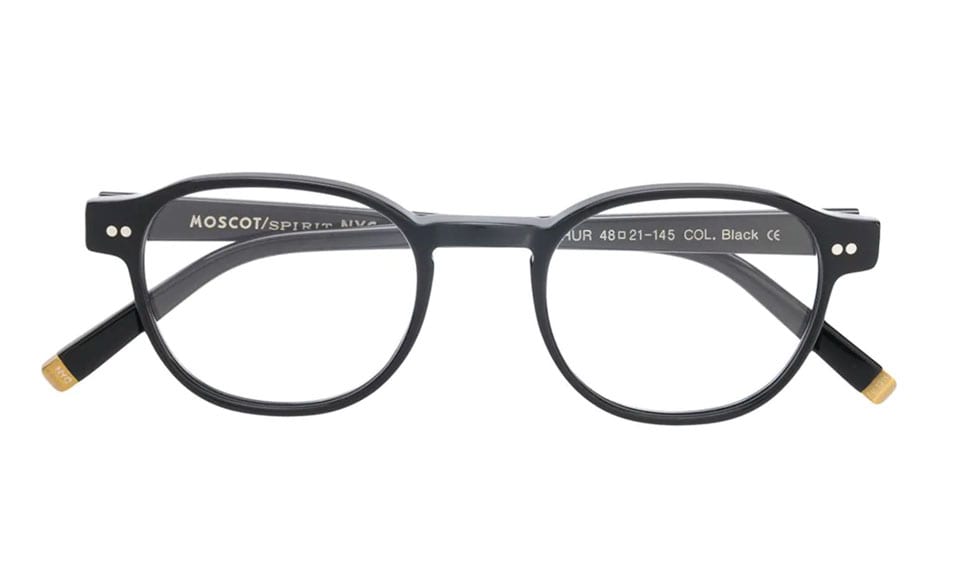 7 of 10
Moscot
New York institution Moscot has been making eyewear for over 100 years.Coupling well-refined aesthetics with unequivocal craftsmanship, their designs have become synonymous with the mugs of Andy Warhol, Woody Allen and James Dean. Now a fashion powerhouse, they are still, at heart, and downtown neighbourhood optician!
Shop Now 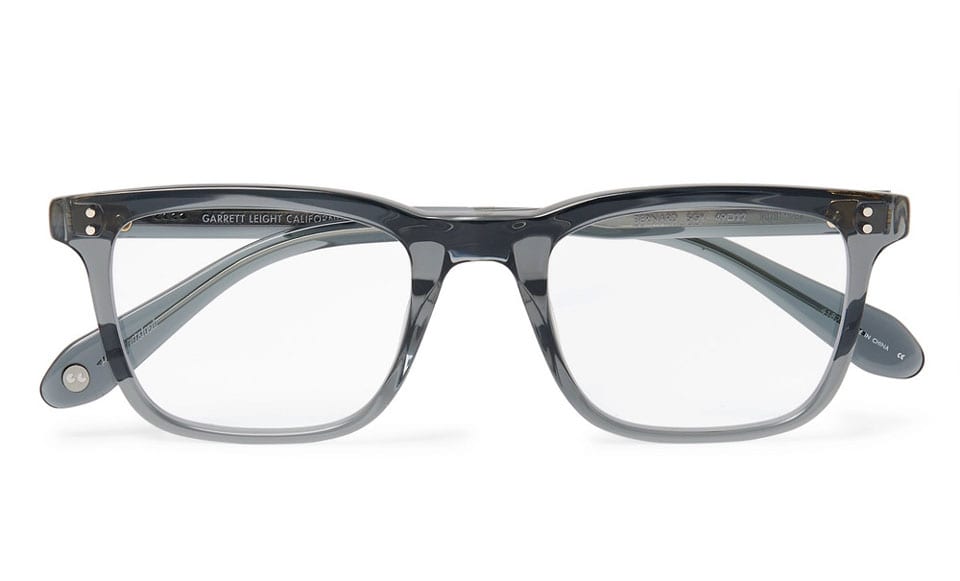 8 of 10
Garrett Leight
Garrett Leight is the son of Oliver Peoples founding member, Larry Leight. An understudy to his father for his formative years, he eventually started making frames under his own name in Venice back in 2011.His designs are much more modern than his old man’s, and his company provides high-end shades for the hip west-coast generation, with stores in LA’s downtown art district and Hayes Valley, San Francisco.
Shop Now 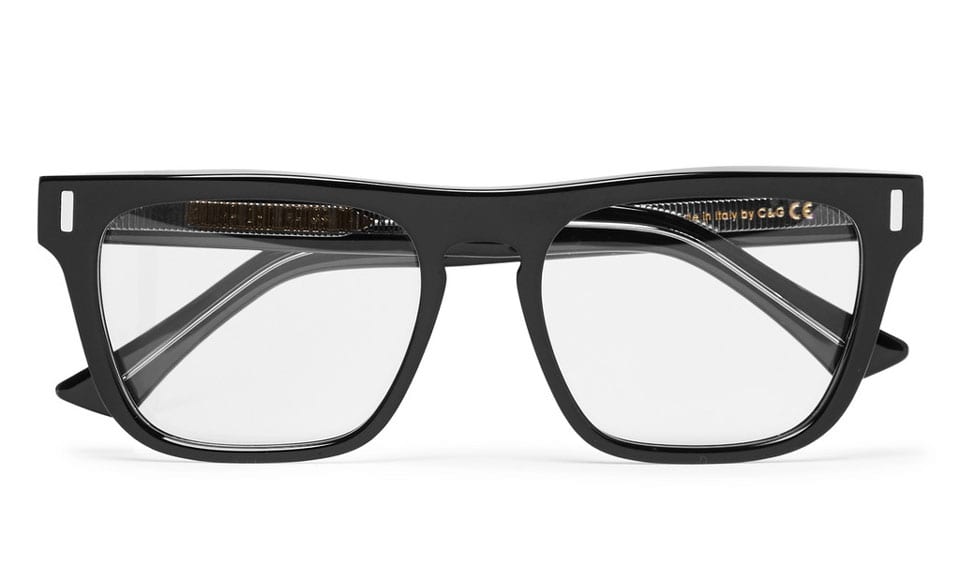 9 of 10
Cuttler and Gross
Independent British luxury eyewear brand Cuttler and Gross make glasses that demand attention. Their classic thick black rims are renowned the world over. Their designs scream London, whether you’re in work or wind-down mode. In their recent collaborations with Paul Smith, the company have unveiled a great range of thinner, refined frames for the modern man.
Shop Now 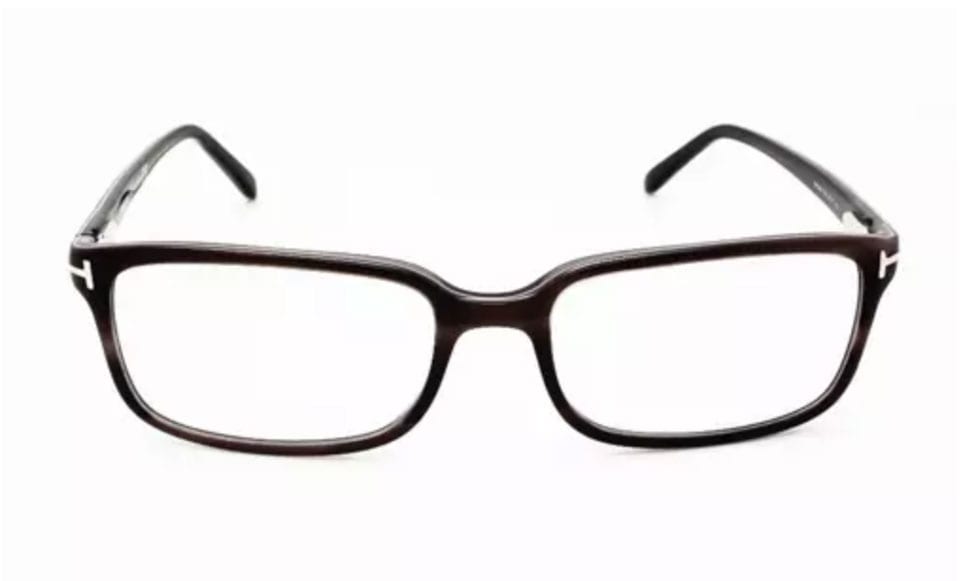 10 of 10
Tom Ford
If it’s square rims you’re after check Tom Ford’s recent eyewear collection. The iconic US fashion designer-come-Hollywood-director has an impeccable eye for simplicity with a modern twist. The FT5294 round rims are a standout within his versatile and bizarrely named range. Prices lean toward the luxury scale, but you know why when it comes to Mr Ford.
Shop Now
FOLLOW DMARGE ON FACEBOOK, INSTAGRAM OR LINKEDIN FOR MORE NEWS & FEATURES