Sydney and Melbourne may be favoured for their lively nightlife, but even in the peak of summer, they can’t compete with the subtropical climes of Queensland, which bless Brisbane with some of the most rooftop bar-friendly weather in the world. As we’re sure you’ll agree, not a lot can compete with cracking open an ice-cold beer or sipping on a refreshing cocktail – mojito, anyone? – several levels above the street where you can feel more entitled than your peers down below.

But here, paradisal conditions alone aren’t enough to hold a rooftop bar above the competition. You need vision, panache and that x-factor to set it all off – and decent drinks and cocktail menus don’t go amiss either. It’s no surprise then that Brisbane’s sky-high bar scene is growing faster than you can say: “I love these warm isobars!”

So, whether you’re in Brisbane for a short trip and staying in one of the city’s coolest hotels or Airbnbs, you simply fancy a beverage or two after a day checking out the best menswear shops and sneaker stores or you’re looking for some pre-drinks before heading to a cool restaurant for dinner, here are the best rooftop bars you’ll find in Brisbane. 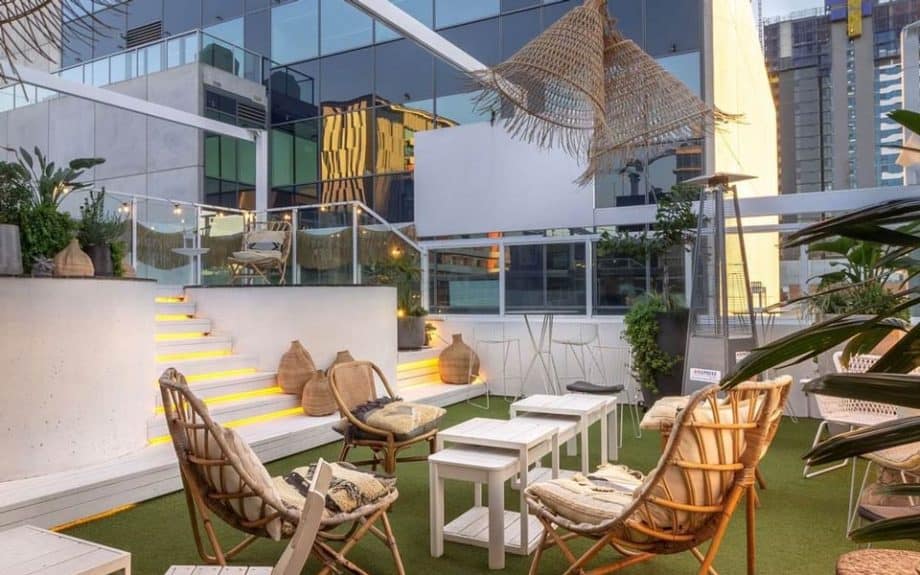 Rooftop bars don’t make more of a splash than Limes. If it’s sky-high hot tub action you’re after, pack your trunks and plunge into one of two large spas and get boozy in the jacuzzi. Be ready for peak-time party vibes as the “hot tubs get pretty loose”, according to one barman. House DJs on weekends, a BBQ, decent (though not extensive) selection of fizz, spirits and beer, all point towards a wet and wild night out.

Situated on top of a boujee boutique hotel, Limes’ rooftop bar serves up a simple, uncluttered interior and a bright and airy main bar area where you can chill away from any potential hot tub havoc around the corner. 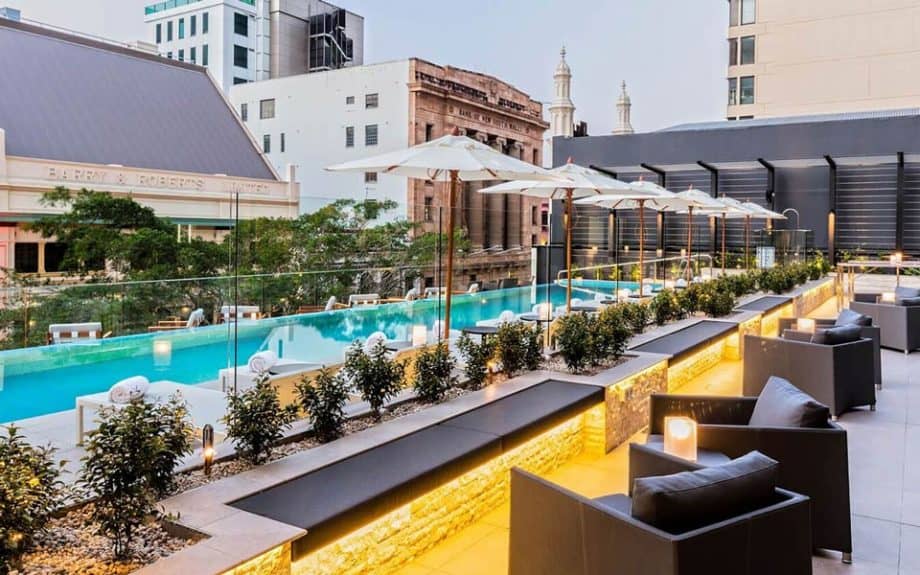 The Pool Terrace & Bar atop the Next Hotel on Brisbane’s Queen Street serves up what could be described as Australia’s answer to Miami-style entertainment. The focal point is, without doubt, the 20-metre infinity pool which yes, you are able to swim in (it’s not just a fancy centrepiece) until late.

But of course, you’re going here more to drink, not swim lengths, and as such, the bar will happily dish out a range of snacks and pizzas alongside a healthy selection of cocktails, beers and wines 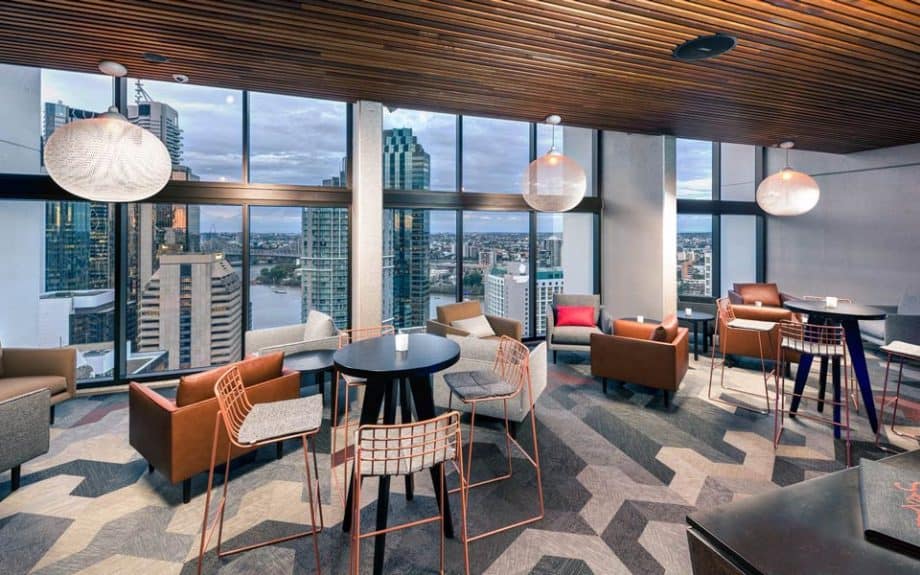 Sazerac isn’t quite a rooftop bar, but it is found on level 30 of the Four Points by Sheraton Hotel, putting you further above street-level than most other bars on this list. Sazerac opened in 2016 to much hype and has certainly become one of Brisbane’s hottest watering holes, with a particularly heavy focus on its cocktail menu – it is named after a cocktail invented in New Orleans, after all.

But just as you’ll be won over by the drinks selection (don’t worry, beer and wine is available too) you’ll be hard pushed to find a more gorgeous view of Brisbane’s skyline. 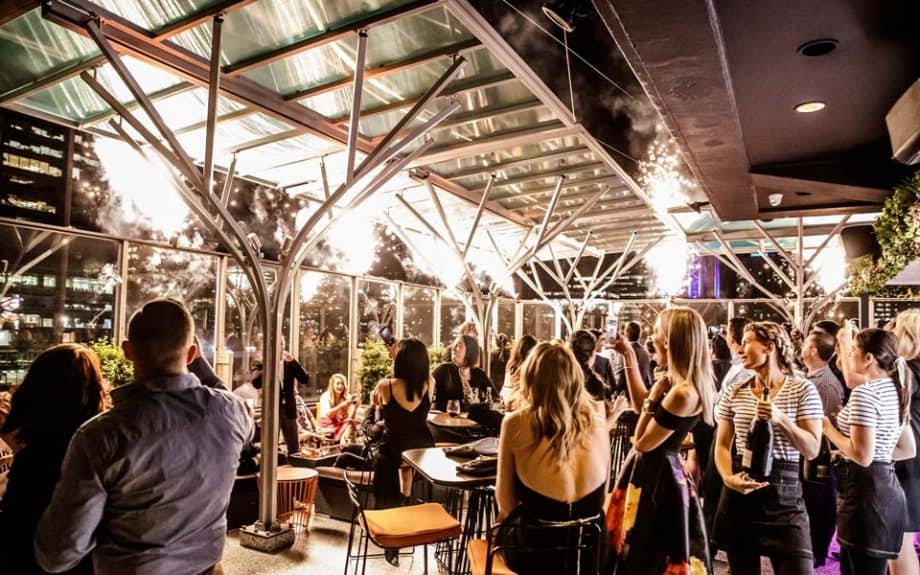 Perched sixteen floors up on top of the Mercure Hotel, Sixteen Antlers offers its boozing guests a sublime view of Brisbane City. Also taking its name from the antler-inspired awnings, you’ll be wowed not just by the drinks menu, but the architectural design too. But, back to that drinks menu. Sixteen Antlers’ cocktail game is strong, with a delectable list of house signatures, although the bar staff will be more than happy to make you something else of your choosing.

And if you’re thinking about a function space in the heart of Brisbane, the private use of the rooftop pool should help swing things in this bar’s favour. 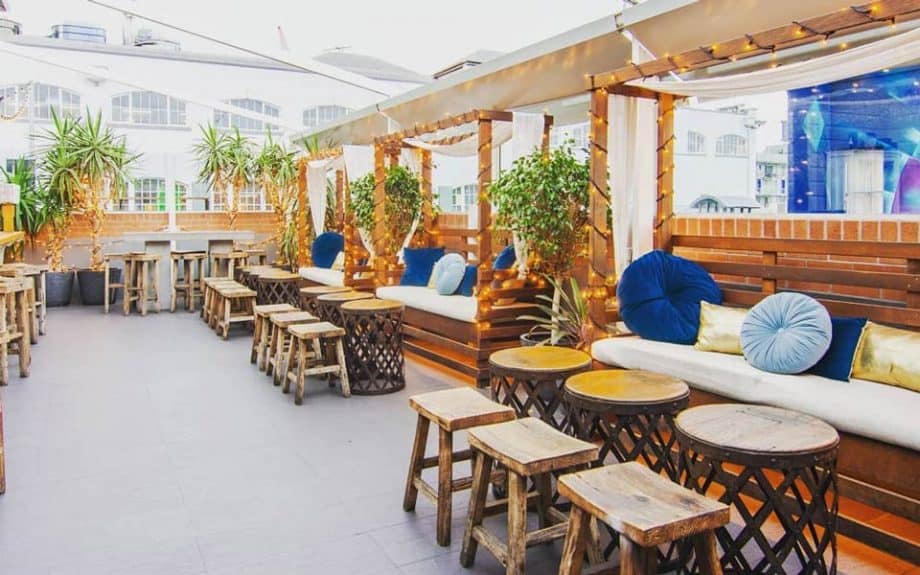 If you’re looking for a good time but aren’t necessarily bothered by large crowds, Elixir Rooftop Bar is the perfect Brisbane jaunt. It’s not the biggest rooftop bar around, but some cleverly designed and placed furniture such as a number of day beds help to maximise the space. You’re surrounded by an abundance of plants here too, with your whole experience centred around the Elixir of Life.

Of course, smashing several cocktails may inhibit the key to eternal life, but given they’re all delicious and made by some expert bartenders, we’re pretty sure you’re going to mind too much. Elixir is also keen to shine the spotlight on local businesses, with many of the beers in the fridge and on the taps being sourced from nearby breweries. 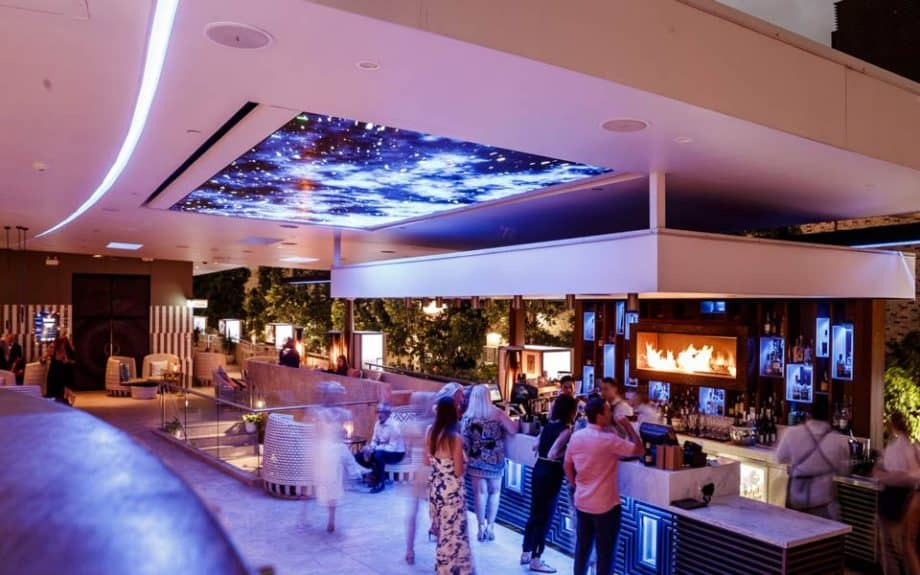 Found wrapping around the Podium Level of Rydges South Bank, Soleil Pool Bar offers something for every style of drinker. If you want to soak up the sun (and let’s be honest, you probably will) feel free to lounge by the pool. But if you want to get away from the heat but still feel like you’re outside, head into the bar and stand beneath the huge LED screen that projects the night sky.

The cocktail menu is one of the finest we’ve seen, with Soleil’s bartenders concocting a tantalising list of drinks to suit all palettes. The wine list shows off some of the best Australian red and white wines around, save for a few French champagnes, and the beer list is equally accommodating to local producers. Oh, and it’s the sister venue to Bacchus, one of the best restaurants in Brisbane, so you can rest assured you’ll be fed well here too. 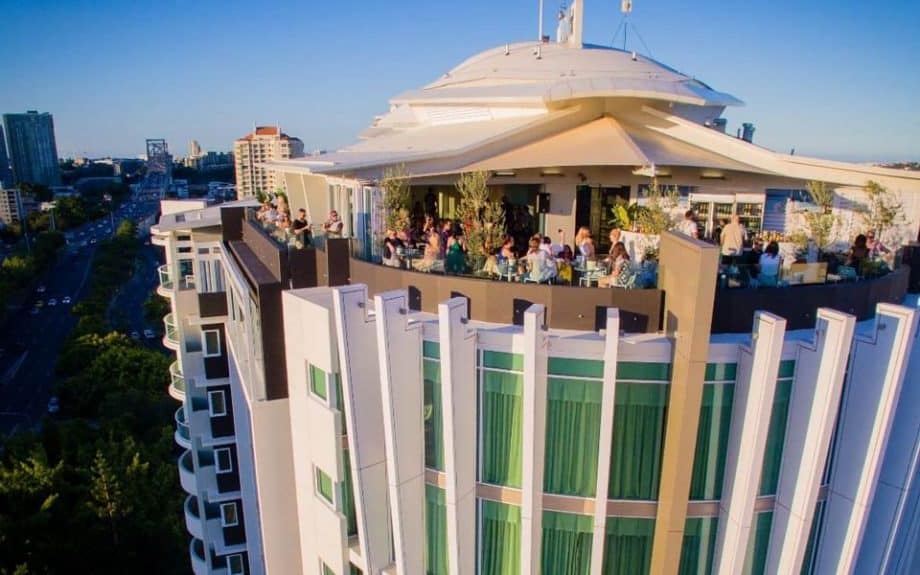 One of the highest rooftop bars in Brisbane is Eagle’s Nest, perched atop the 12th floor of The Point Brisbane Hotel in Kangaroo Point. You’ll want to make plans to visit this bar in advance, as it’s only open Friday and Sunday afternoons, but, manage to secure yourself a spot and you’ll be rewarded with glorious views all over Brisbane.

A carefully curated cocktail list awaits, along with a tapas menu that we would love to order the entirety of (tori karaage, firecracker mussels, pork belly bao and deep fried brie being just a selection of what’s on offer). If you can’t make it to either of the open days, then you’ll just need to book yourself a function, as it’s these that Eagles Nest hosts the remainder of the week. 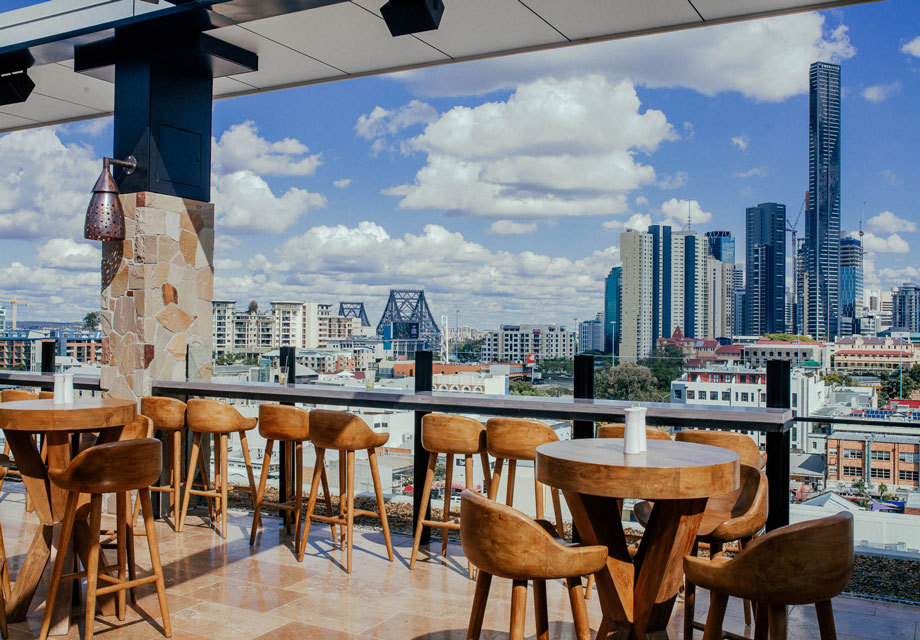 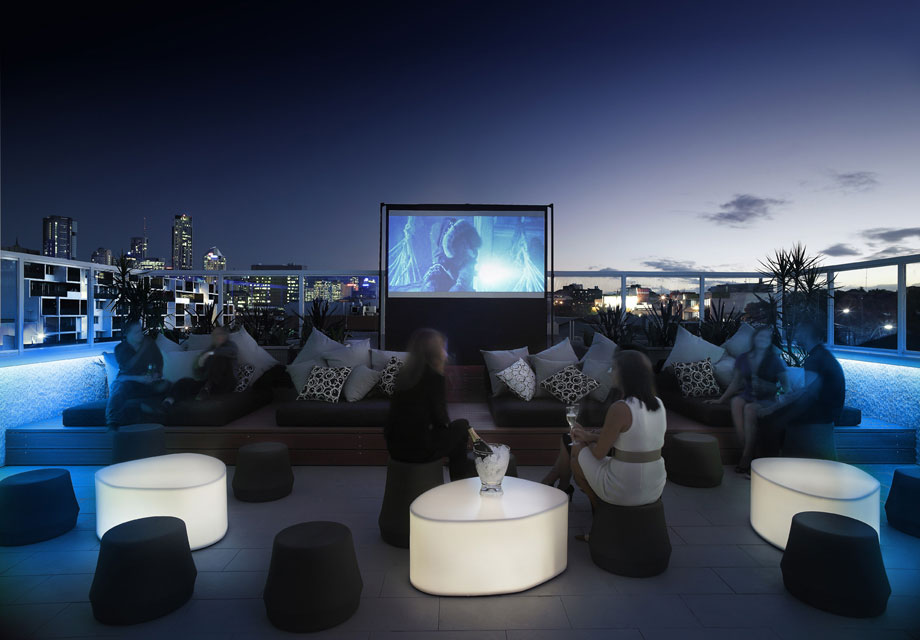 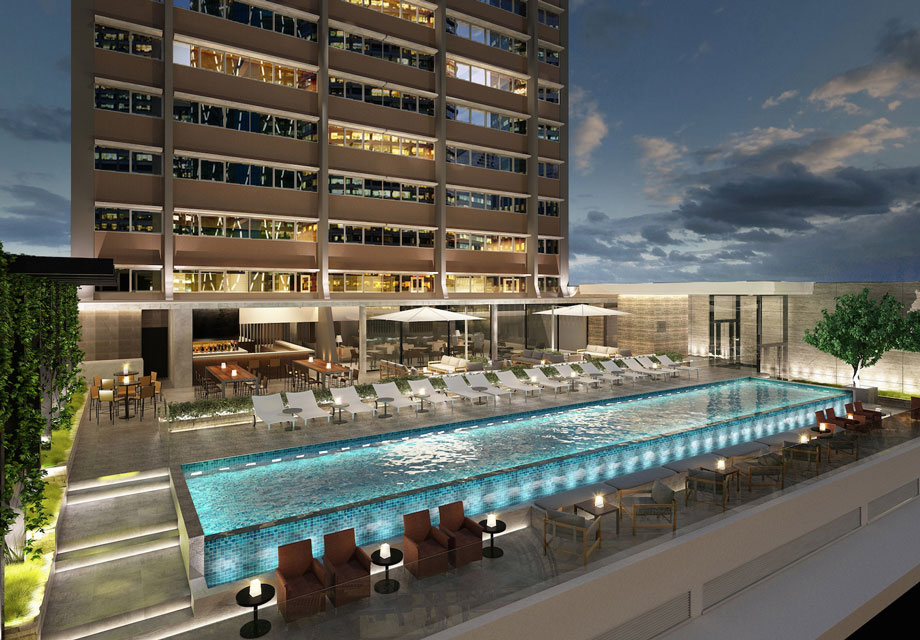 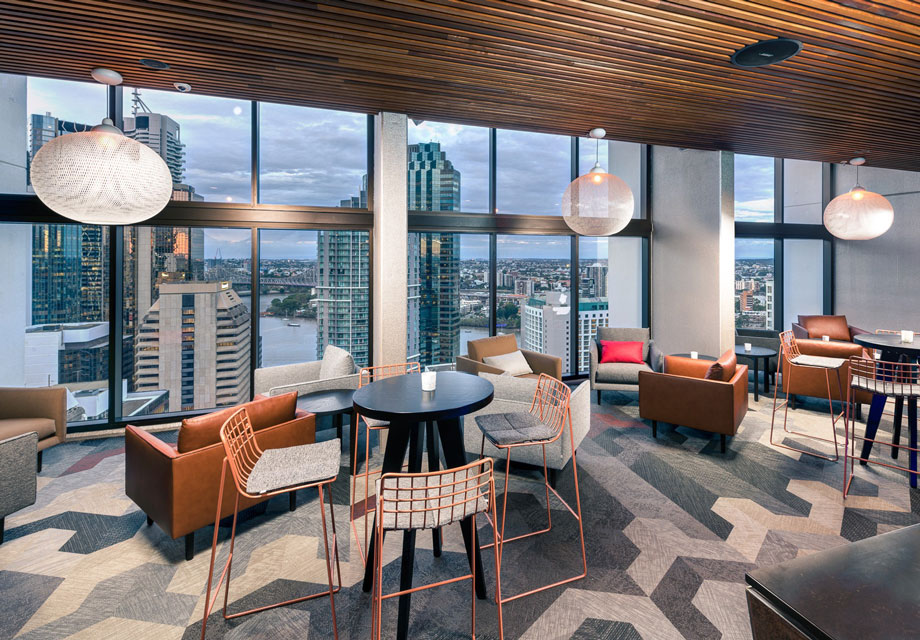