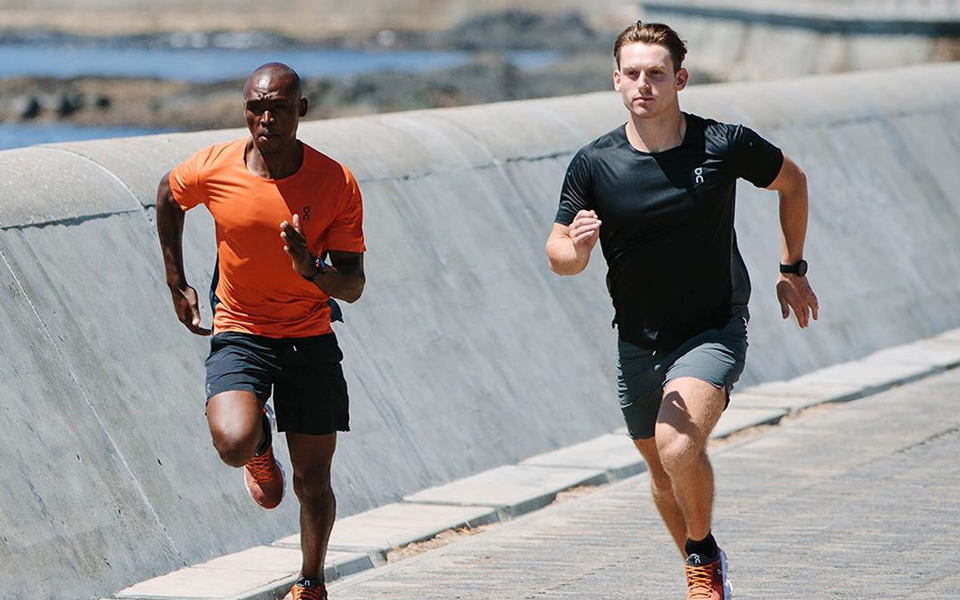 Just as it’s important to find the right running shorts for your daily workouts, finding the right running top is not a decision that should be made without serious consideration. Get the wrong fit and you’ll wish your run could end as soon as you begin or choose the wrong material and you’ll be sweating buckets from minimum effort.

Where you run will also have an effect on the tops and shirts you invest in. If you choose to run through the city streets, you’re going to want to look as stylish as possible, but if you go off the beaten track, then you’ll definitely want something with a bit more substance.

Besides just because a running top doesn’t form part of your daily wardrobe, doesn’t mean you shouldn’t place as much importance on it. But with a sea of brands, materials and styles flooding the market, whittling them down to the top for you isn’t a decision that can be made easily. That’s where we come in. We’ve scoured the market for the best of the best to bring you the definitive guide to the best men’s running tops and shirts currently available.

Should running shirts be loose or tight?

You running shirt must not flap around when you stride in them. It should be a fine balance between well-fitted and slightly loose, allowing for full range of motion and not compressing your waist or diaphragm.

What is the best material to run in?

Nylon and polyester are the most popular fabrics in running wear since they are lightweight, durable and breathable. They are also stretchy and non-absorbent so you are comfortable when you run.

Are cotton shirts good for running?

No. Cotton is not ideal for running as it absorbs moisture well, making you feel hot and damp with sweat. This is the reason why running tops are typically composed of synthetic fibers and not with pure cotton. 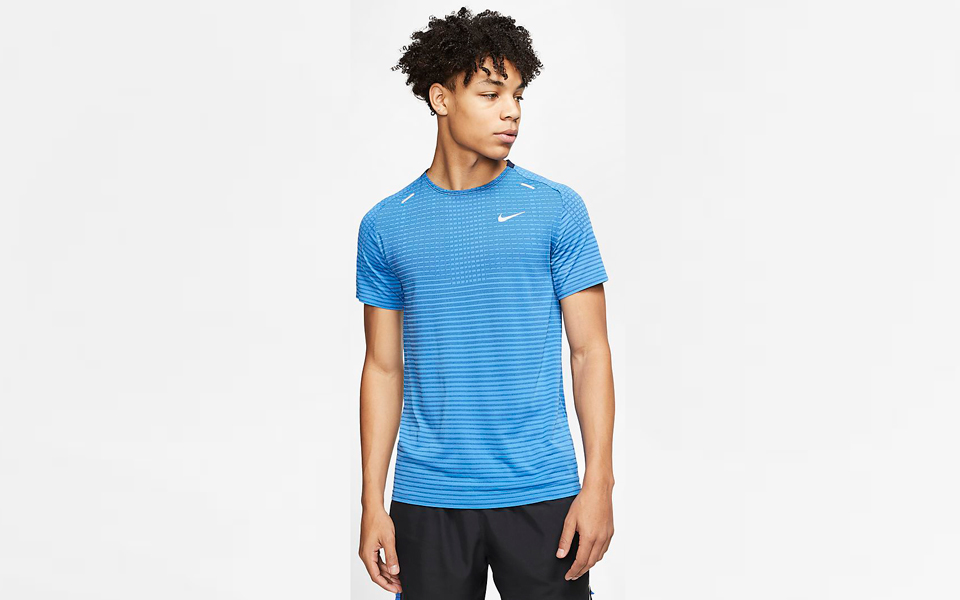 1 of 12
Nike - TechKnit Ultra
Nike should need no introduction. The most valuable sports brand in the world knows a thing or two when it comes to developing world-class apparel. Aside from its legendary Dri-Fit technology, Nike also has TechKnit, a material developed in 2016 to help support the body's natural thermoregulation (the process of maintaining core internal temperature). That's exactly what this top does, with air vents placed in the exact areas you'd want them. It's lightweight too so won't hold you down and it has reflective strips to keep you seen at night.
Shop Now 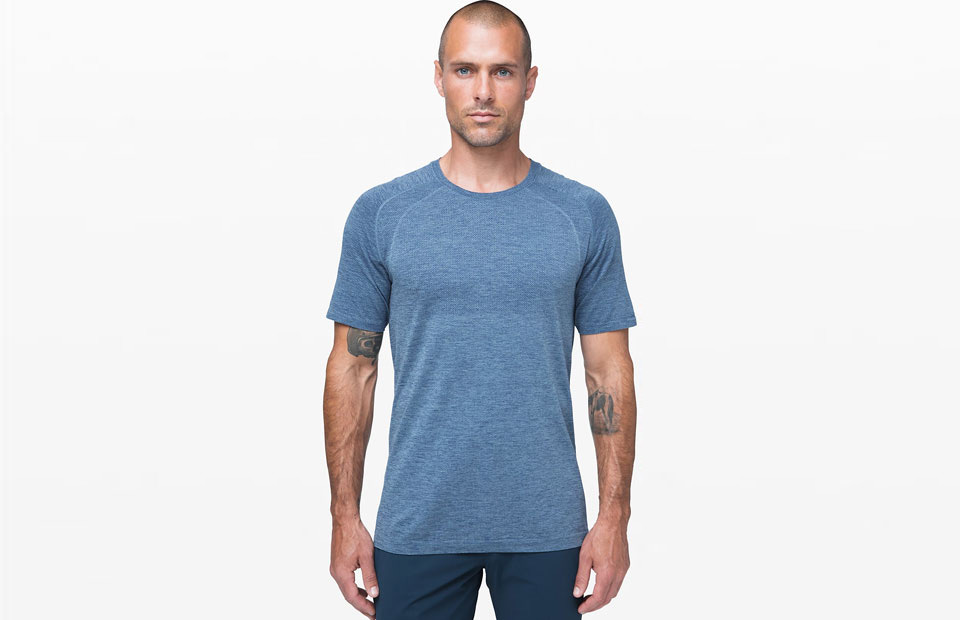 2 of 12
Lululemon - Metal Vent Tech Short Sleeve 2.0
No, Lululemon isn't just a brand for yoga-practicing women, it actually has a strong apparel section for guys too. This Metal Vent Tech tee is a prime example, as it not only looks great (and comes in a range of colours) but it has strategically placed air vents and Silverescent technology which promises to stop it from smelling after particularly sweaty runs by inhibiting the growth of bacteria.
Shop Now 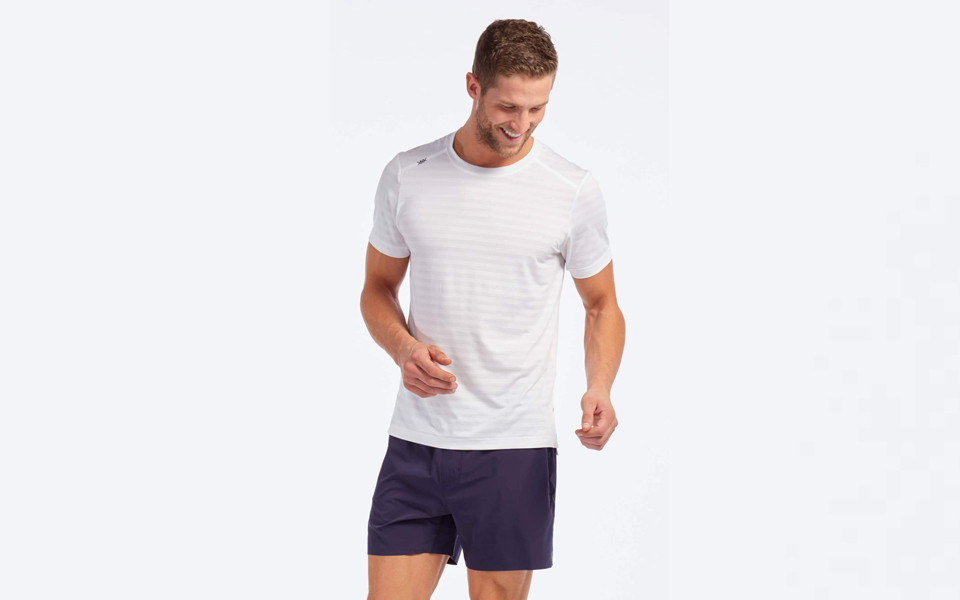 3 of 12
Rhone - Swift Short Sleeve
This American start-up may be young but it's already made a huge name for itself, finding a big audience from guys of all ages. The Swift tee is designed specifically for running, with a lightweight build with moisture-wicking and anti-odour technologies. Add to that Flatlock stitching for "chafe-free seams" and you'll soon notice your runs become that bit more comfortable.
Shop Now 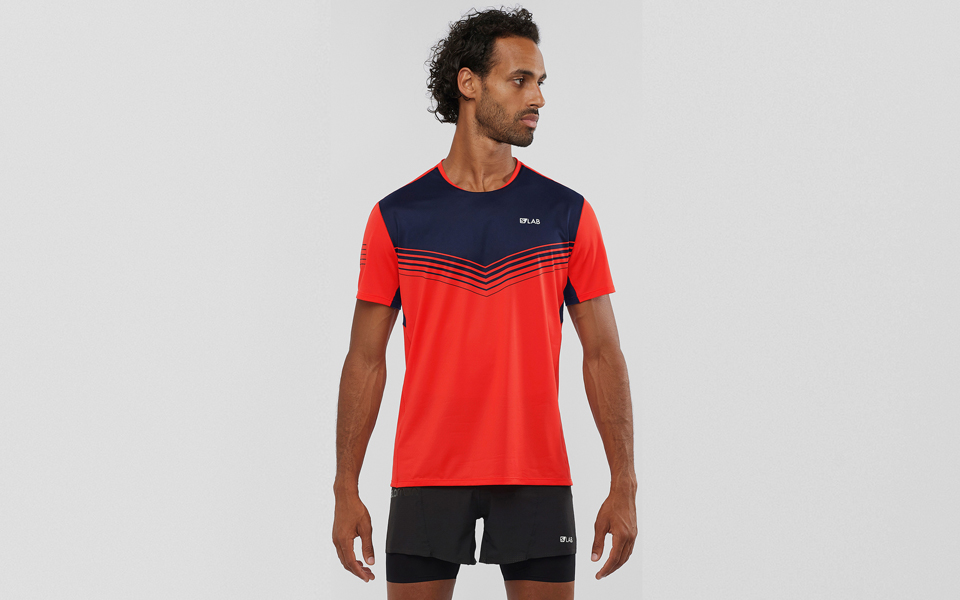 4 of 12
Salomon - S/Lab Sense Tee
You may know French brand Salomon more for its ski and snowboard gear than for running. But with over 70 years in the game, it can safely be considered accomplished. The S/Lab Sense Tee is a product of that experience and is designed for "experienced runners." It barely makes a dent on the scales and mesh vents under the arms ensure you stay smell-free. You also get 37.5 fabric, which maintains an "ideal level of humidity" i.e. it keeps moisture away from your body while keeping you cool.
Shop Now 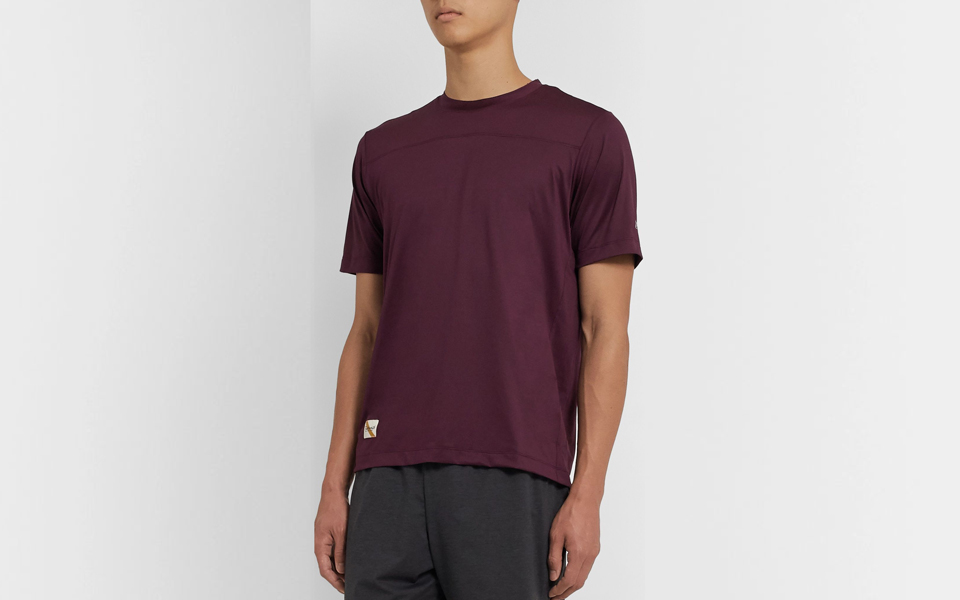 5 of 12
Tracksmith - Twilight Stretch-Mesh T-Shirt
Tracksmith was born in 2014 in New England, US, taking its inspiration from amateur-level college athletes. The Twilight tee has been developed to be the optimum tool for running, whether at a competitive level or casual. It's made from a lightweight Italian Borgini fabric which ticks off all the major boxes: breathable; moisture-wicking; and temperature regulating.
Shop Now 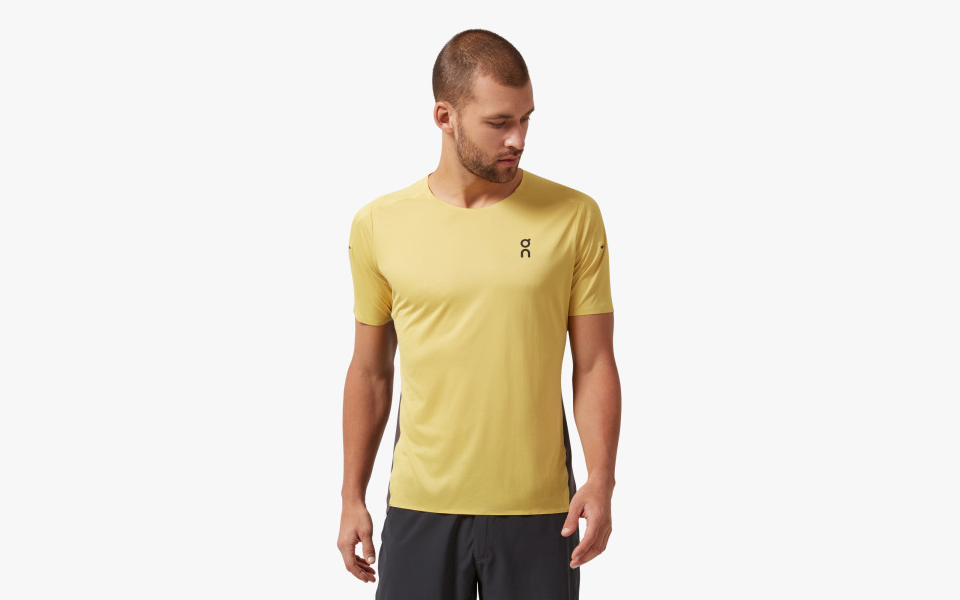 6 of 12
On Running - Performance-T
This Swiss brand is another one of relative infancy, having been founded in 2010. Customers in over 50 countries later mean if you weren't already aware of it, then you should be. The company's Performance-T is one of its hero products, benefitting from high-tech fabrics that won't weigh you down, taped seams to prevent chafing, and a large breathable back panel to keep the air flowing around your body while it's also running through your hair.
Shop Now 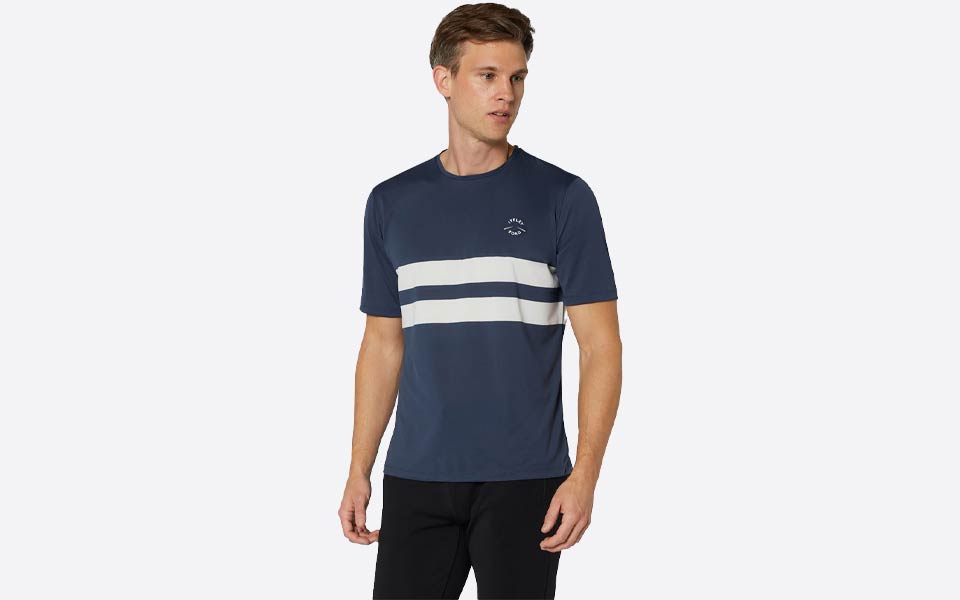 7 of 12
Iffley Road - Durham Lightweight T-Shirt
Iffley Road was founded by a British husband and wife team and named after the track where Roger Bannister became the first person to run a mile in under four minutes. The brand caters exclusively for men and one of the stand out items is this striped Durham t-shirt.

Not only is it lightweight and breathable, but it harnesses the power of coffee beans (yes, really) by using an S.Cafe Ice-Cafe fabric, which incorporates recycled coffee grounds to help wick moisture away from your skin and absorbs it to prevent odour build-up. The Ice-Cafe fabric also does a damn fine job of cooling your body temperature, making those kms even easier to lap up. There's no other running top quite like it.
Shop Now 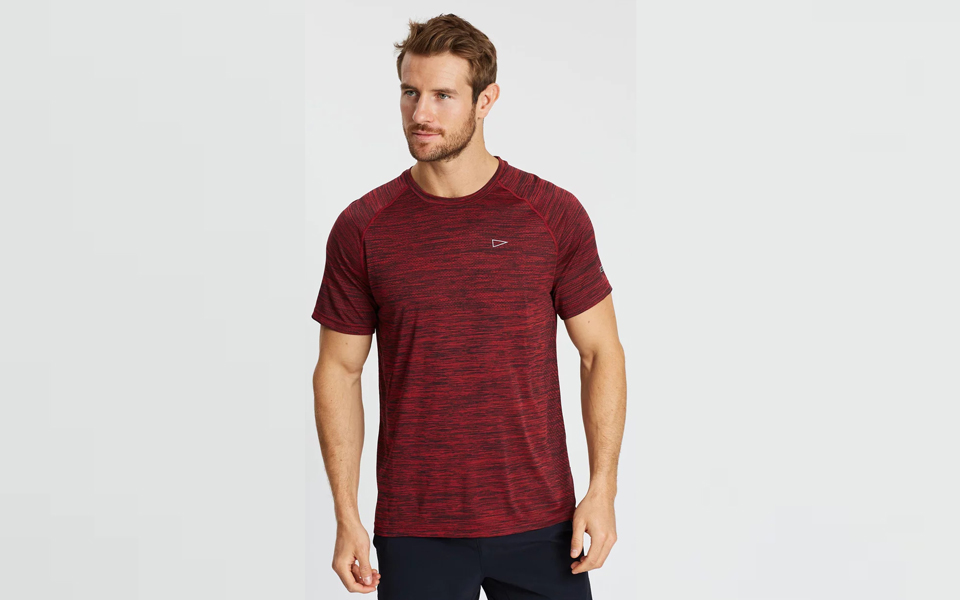 8 of 12
SQD Athletica - Ventilate Tee
SQD Athletica (pronounced, squad) is homegrown Australian brand that's committed to keeping men fit and performing at their best. The Ventilate Tee is a prime example of that, offering Polygiene anti-odour technology to keep smells at bay for longer between washes. It can also be had in some eye-catching colours and reflective logos will help road users see you when the sun goes down.
Shop Now 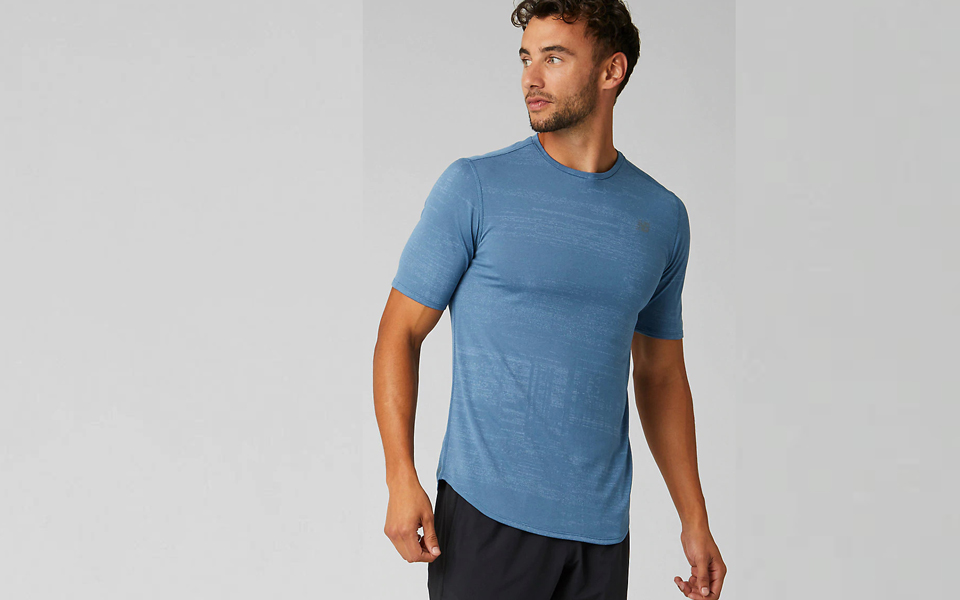 9 of 12
New Balance - Q Speed Breathe Short Sleeve
New Balance started life producing heel inserts for shoes and has now been in operation for more than a century to comfortably become one of the major sports brands worldwide. The company consistently strives to be at the forefront of technologies and as a result, the Q Speed Breathe t-shirt benefits from proprietary ICEx and DRYx. These help to keep moisture away from the body, which is particularly effective when the temperature rises, and New Balance even markets it as a top that can be worn away from running too longer-then-usual hemline.
Shop Now 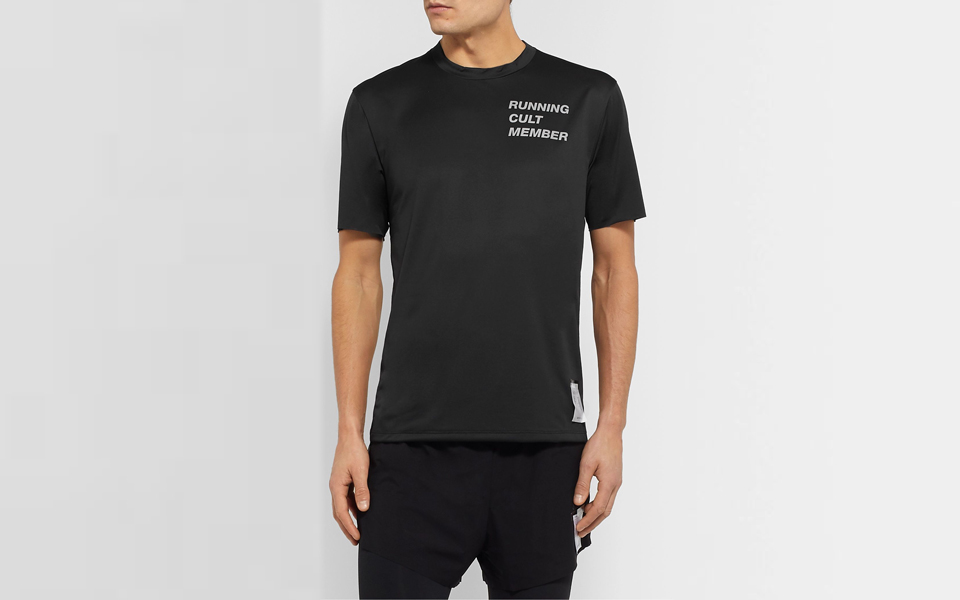 10 of 12
Satisfy - Light Printed Deltapeak T-Shirt
Satisfy positions itself at the more premium end of the market. Founded in 2015 in Paris, France, it's aim is to take a more 'rebellious' attitude to running fashion. You won't find any bright colours within its range of apparel, as it takes a more monochrome approach and a heavy emphasis on printed designs. The Deltapeak t-shirt is testament to that, but it's not all style and no substance. Deltapeak is a Japanese fabric that claims to be anti-wrinkle, fast-drying and UV resistant, idea for running outside in the sun. Prefer night running? No problem, reflective prints will make sure you're seen.
Shop Now
< 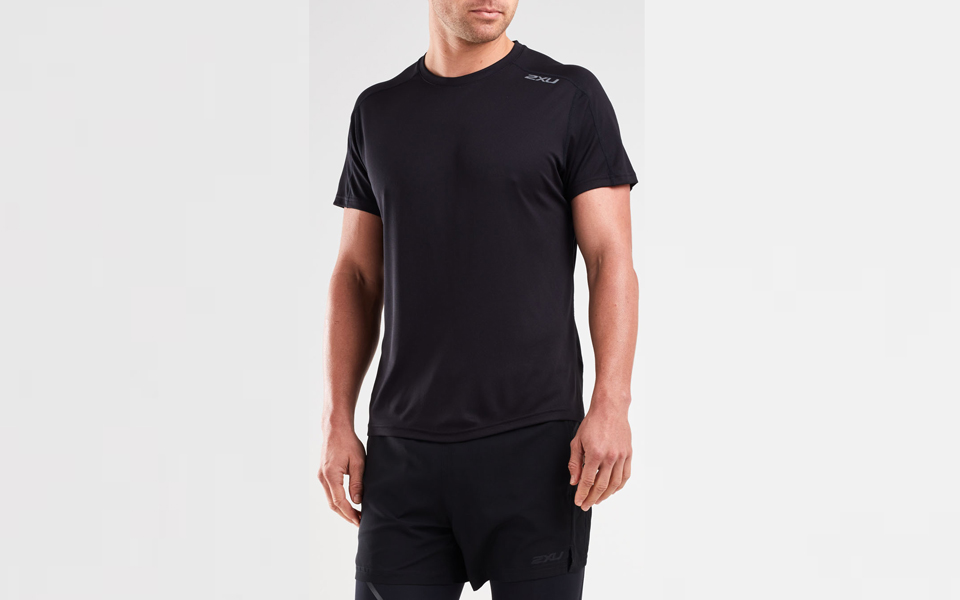 11 of 12
2XU - XVent G2 Tee
2XU is another brand from down under that strives for absolute performance. The company's XVent G2 tee employs a double-knit fabric to not only wick sweat away from your body, but an additional outer layer helps to disperse it away from the top entirely. The fabric is designed to move seamlessly with your body too, giving you full range of movement. We also happen to think it looks fantastic, rocking a minimal, yet premium-looking design.
Shop Now 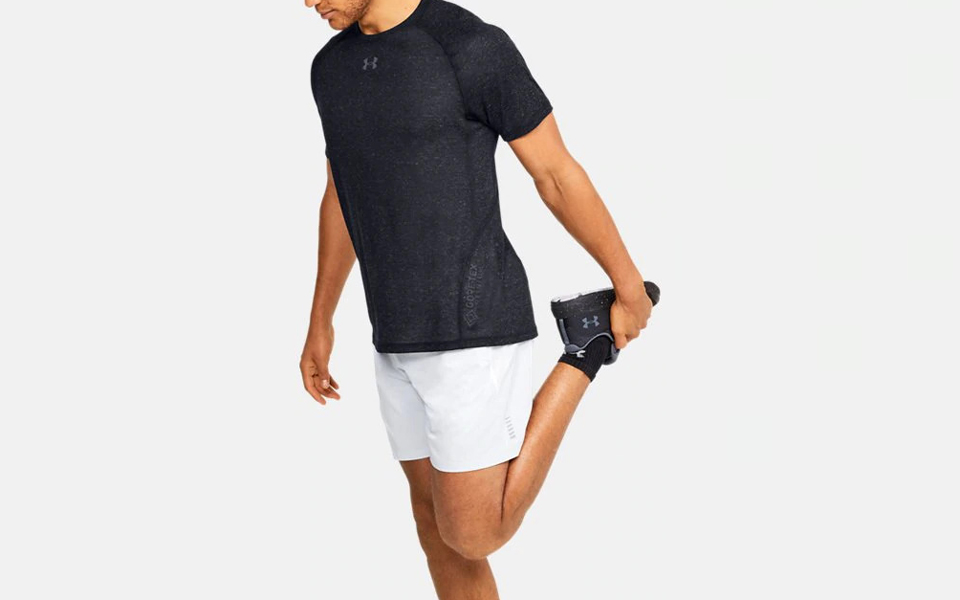 12 of 12
Under Armour - Breeze SS Shirt
Under Armour is another heavyweight in the fitness world, producing everything from tops to shorts, to shoes and accessories. The Breeze Short Sleeve Shirt is made from a Gore-Tex Infinium fabric which is "crazy soft", lightweight and breathable, and UA claims it provides "next-level comfort". The only negative we can see? You best be happy with black.
Shop Now