‘Dude Food’: a multiverse of meat, wicked heat and salty-sweet worlds bound together by the laws of maximum taste and contempt for moderation. And when it comes to greasy grub, Brisbane has been feeling the ripple effect of a kind of burger-induced big bang that can be traced back over the last 3 to 4 years.

The result is a Queensland capital booming with choice and bouncing with creative flair – and it’s showing no signs of slowing down. So, where is a magnificent bastard to eat? Brisbanites, listen up. Here is dude food Brisbane.

Red Hook offers straight-up, no-nonsense New York street food – and it’s not for the fainthearted. Meet the The Resolution Breaker Burger: a towering colossus of deliciousness. A mountain of double beef, double bacon, lettuce, tomato, cheese and Ketchup ‘special sauce’. And if that’s not enough, quash any lingering flicker of hunger with a side of Mac ‘n’ Cheese Squares. These beauts are frozen, chopped into squares, crumbed, then deep fried, and are at their best with a side of hot sauce, giving those creamy cats a kick.

Cool fact: The barman here says that one man came here for lunch everyday for 6 months. Unsurprisingly, he died of a heart attack. He did it his way.

This is cuisine like no other. Heya Bar – a basement precinct inspired by Shinjuku’s Golden Gai district – pumps out Asian-style dude-friendly grub until 3am. It’s becoming increasingly famous for its cheeseburger spring roll. Yes, your ear’oles heard me correctly, a spring roll which tastes unfathomably like a classic cheeseburger.

These perfectly formed pipes of joy are brimming with bacon, beef, caramelized onion and served with lettuce, pickle and hickory aioli. I also plumped for the Tonkatsu Dog, a spin on the classic pork cutlet dish. Crumbed pork, with creamy slaw & Kimchi Mayonaise served in a soft sub, all rounded off with dashi & vinegar pre-shaken fries.

Cool fact: They have an eight-seater Japanese whiskey bar. They also run weekly comedy nights called Heya is a Joke.

Craving a little more camaraderie with your calamari? Fear not comrades, we have the perfect spot for you. Perhaps better known for its massive selection of over 100 gins, Dutch Courage Officers’ Mess invites you into a late 19th century British colonial outpost. Managing Director Mathew Hilan insists on having his own calamari taco recipe on the menu – lightly battered calamari, wild rocket, tomato and a beautifully aromatic harissa sauce, in soft tortilla wraps. Braised pork sliders with jack cheese and slaw did the trick, plus a feast of southern fried chicken tenderloins are a must too.

Cool fact: They have the second biggest selection of gin in Australia.

Weave through the back alleys of Fortitude Valley’s Brunswick Street, and you’ll smack face-first into an all-guns-blazing rock-n-roll drinking hole. Dingily-lit, graffiti-clad walls and plastered in vintage photographs – it’s a basement of booze, sweat and tears ready to wrestle with your rebellious side. Bands regularly take over the stage, and tonight’s 4-piece fire at will, amping up the early evening drinkers.

The grub packs a punch too. Their cheeseburger – ground angus patty, American cheese, pickles, onions, lettuce, tomato and burger sauce, served with crinkle cut chips. And be sure to try the Buttermilk Fried Chicken, served with red eye gravy and smoked chipotle mayo – rumoured to reduce grown men to tears and quite possibly the filthiest dead bird experience of your life.

Cool fact: Wander past the bar towards the rear and you’ll find a couple of reclaimed walk-in cold rooms. Quite what you do in them is anyone’s guess – we’ll leave that to your imagination.

Walk through the unassuming doors and you’ll slip past the kitchen to find a cavernous bar togged-out in timber and alpine wall murals. They have a huge rep for craft beer, and the kitchen dishes up a host of wings, sliders and dogs. First up: Chicago Style Dog.

Cool fact: Enter the bar, look right and you’ll see Vlad, their mascot pigeon. Vlad is a Tippler Pigeon – known for their endurance.

*Since the time of writing Tippler’s Tap have relocated to Grey Street in Brisbane’s South Bank, where they have repurposed much of the interior timber and decor and brought with them largely the same menu.

RELATED: Dude Food Sydney: 10 Awesome Places To Get Your Eat On

The Smoke BBQ bring American BBQ fare of the lowest, slowest order. Bossing the kitchen sits an American smoker, imported from Kentucky, smoking 120 kilos of meat at a time. Baffled by much of the prep-less chuck-it-on-the-barbie approach of Aussie BBQ culture, manager Philip Mullen and Co are sticklers for the long hickory haul.

I got my hands on a half rack of Texas beef short ribs, seasoned and hickory smoked for 10 hours, then finished on the char grill and mopped with a sweet yet subtly spiced St.Louis style BBQ sauce, served with fries and creamy house slaw. Another house favourite: Smoked Ceegars. This densely packed bad boy of smoked chicken, corn, spinach, cheese, red beans and Southwestern heat, is rolled in wrappers, fried, and served with a cool house dipping sauce.

Cool fact: One worker here has three nipples. He says, gladly, that it doesn’t stop him doing his job. I, for one, can vouch for that.

A great beer-soaking side are the jalapeno hush puppies – deep fried balls of corn, polenta, cheese and jalapeno. Oh, and if you ever thought popcorn needed more pig, BBC have you covered with their maple bacon popcorn – fresh, lightly salted popcorn, showered with juicy, sweet, candied cubes of bacon, and maple sauce. Oink to that!

Cool fact: These guys are officially beer-lacing fiends – you can even get a pilsner cheesecake for crying out loud.

If you’re looking for a dude-inspired feed but want to keep one foot pivoting firmly on sophisticated soil, then Gerard’s Bar have you covered. Sister of Gerard’s Bistro, this slick, rustic charcuterie in Fortitude Valley brings Balearic tapas flair to the table. Famous for their extensive cabinet of delicate, cured meats, they also boast a couple of glaring dude food must-tries: Numero uno: Wagyu Cheeseburger.

Cool fact: Technically, they don’t have a kitchen, as they have no stoves.

Super Whatnot was born out of owner Simon Martin’s love for the Melbourne laneway bar. Its intimate, industrial-chic split-level space remains the preserve of those who like to dig a little deeper for their inner-urban drinking holes. The menu is inspired by the Americas and is designed broadly to accompany beer. You’ll need to get your mitts out and go caveman too – there’s no time for cutlery here (only wooden forks).

I started by sampling the Pao de Queijo – Brazilian cheese bread to you and me. These bite-size discs are a glorious blend of parmesan cheese, cheddar, tapioca flour and olive oil. Next, a slider version of their cheeseburger – a perfectly formed beef patty, double jack cheese, optional bacon, house chipotle sauce, tomato sauce, lettuce and mustard in a brioche bun. Oh, and please, spare a moment for the nachos – 12-hour braised brisket, pico de gallo, guacamole, lime sour cream and frijole.

Mighty Mighty are smitten with the BBQ states, with a smoky soul food menu reflecting each corner of North American cuisine. Here you can plump for dishes hailing from New Orleans, Alabama – even Alaska. However, if it’s classic meat-in-a-bun action you’re after be sure to get down before 14:30 in time for the lunch menu. Make it, and you’ll find a small selection of big-hitters – burgers and hoagies.

I puckered up to the candied pig hoagie, chock-full of succulent pork braised in copper ale for 9 hours, on a bed of jalapeno mayo mixed in red slaw and coated in adobo sauce. It’s a fat-dripping dream of sweet, heat and meat, sandwiched in a foot-long sub. Be sure to try their house favourite chicken wings too – sriracha-honey glaze, toasted ground rice – for that crunchy texture – and blue cheese dipping sauce. God all mighty mighty. 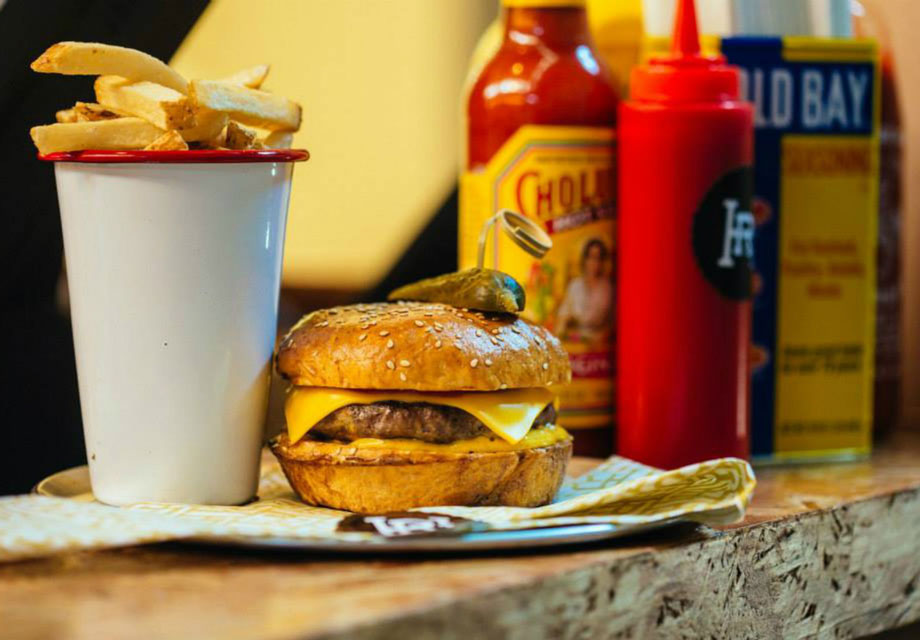 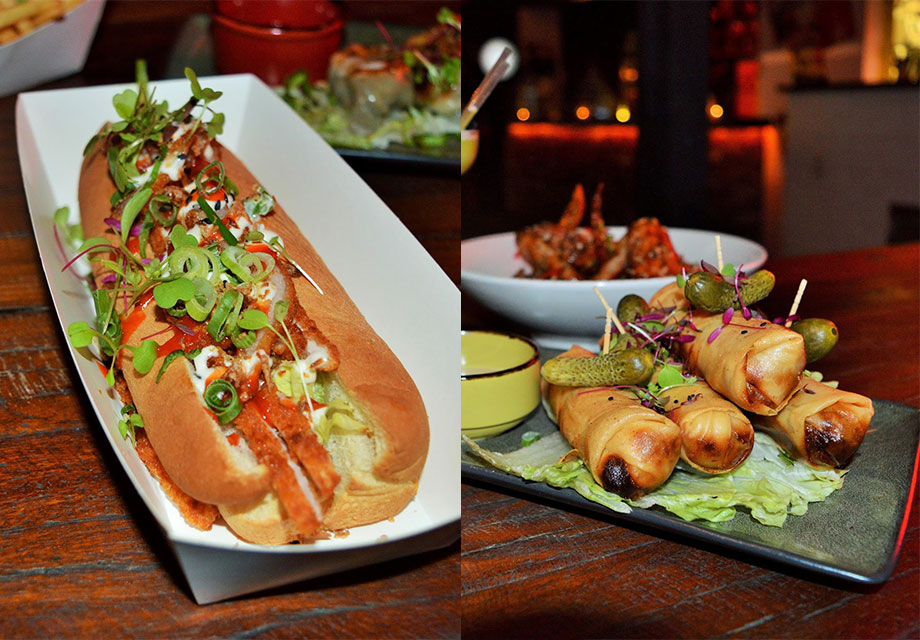 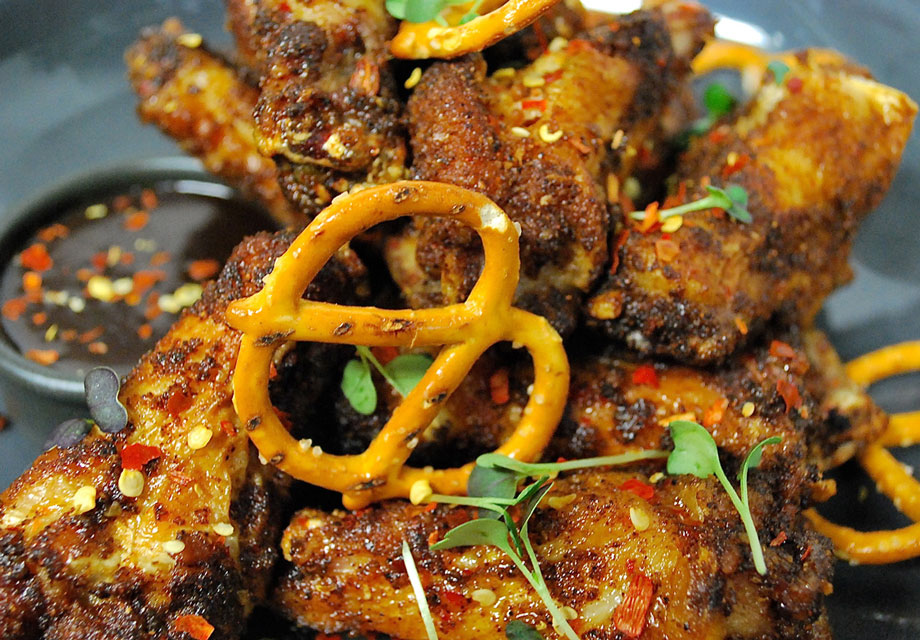 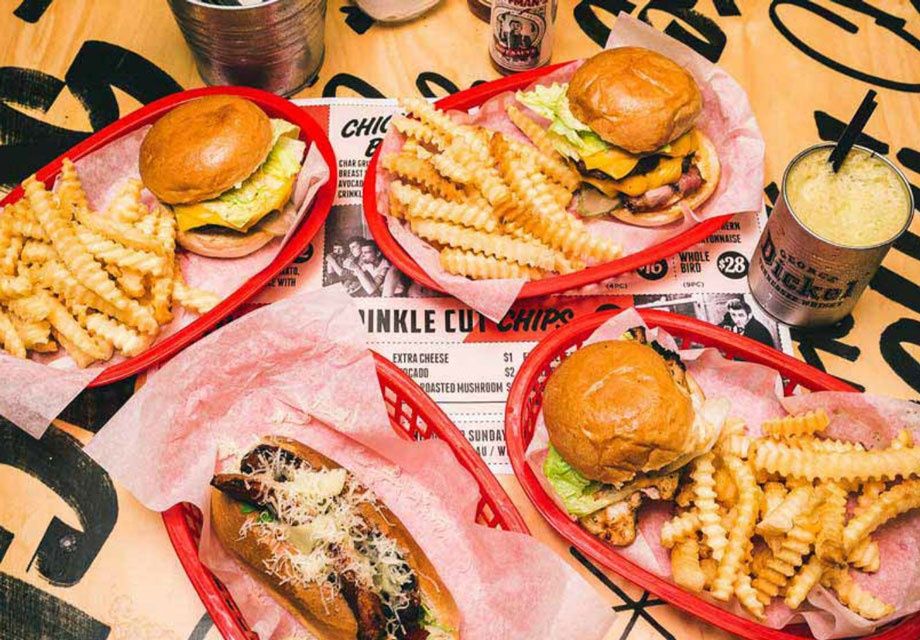 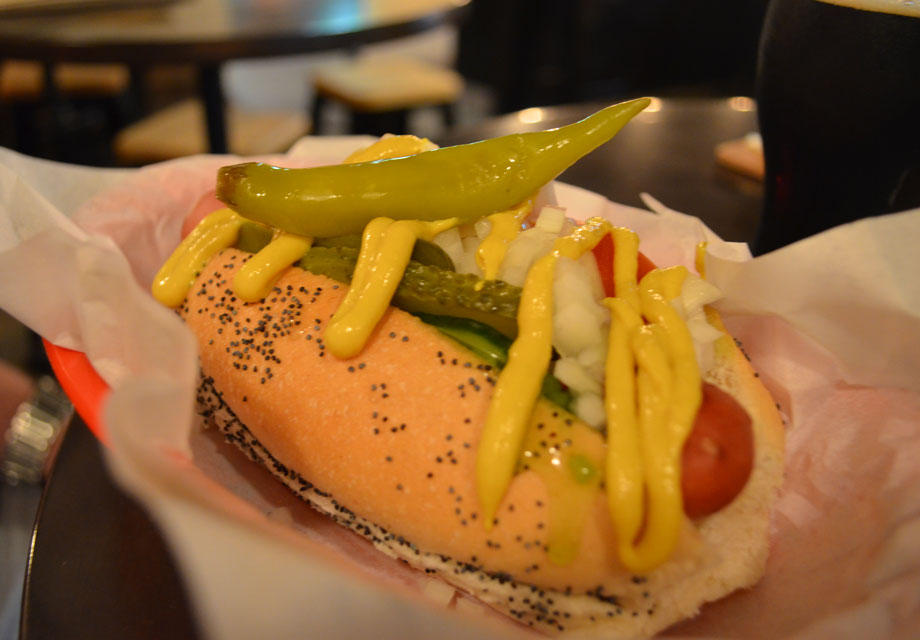 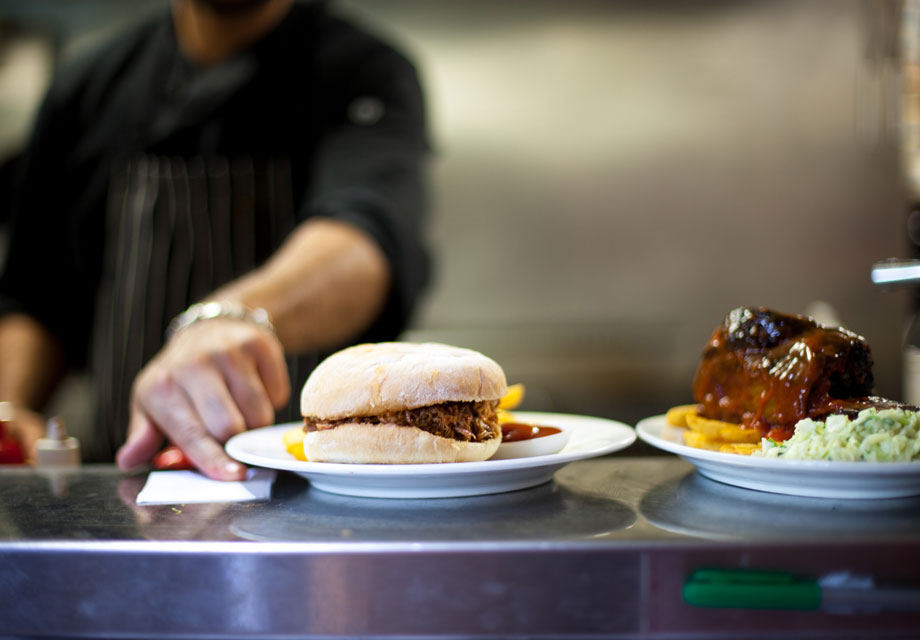 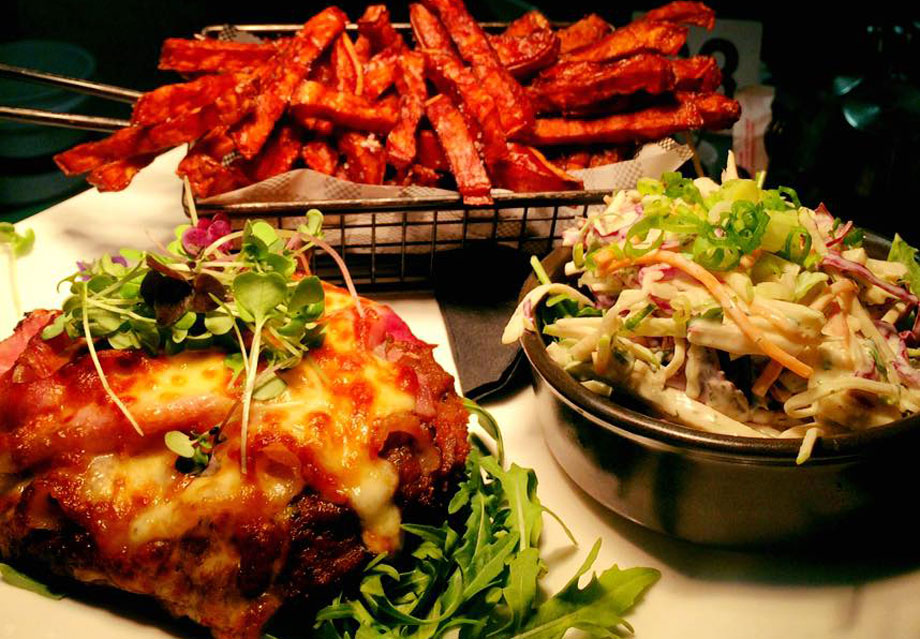 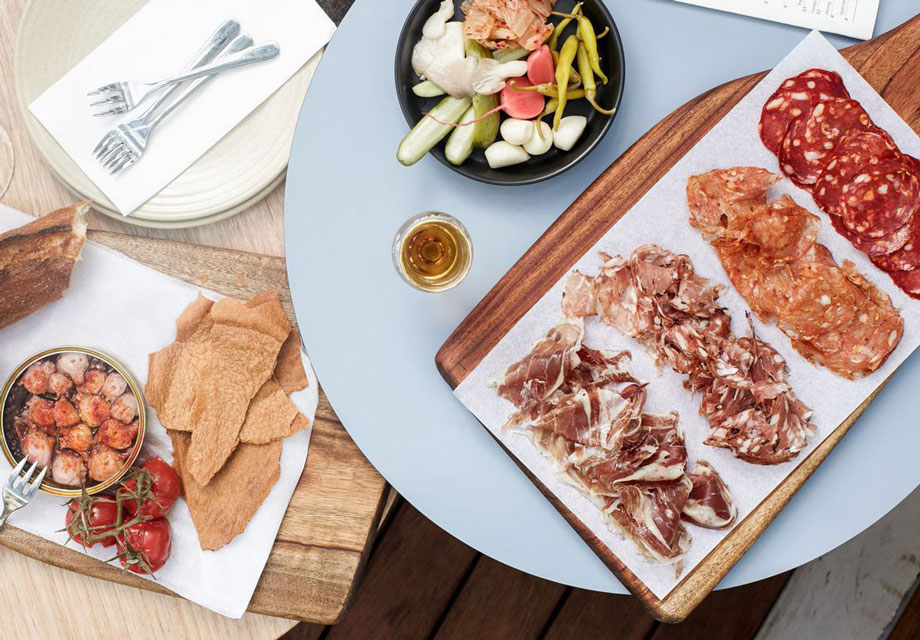 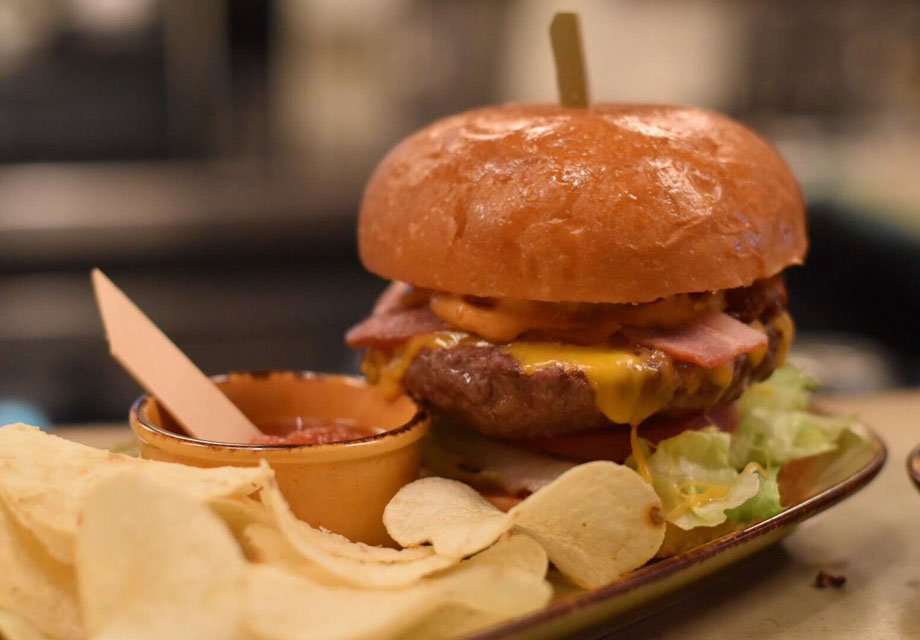 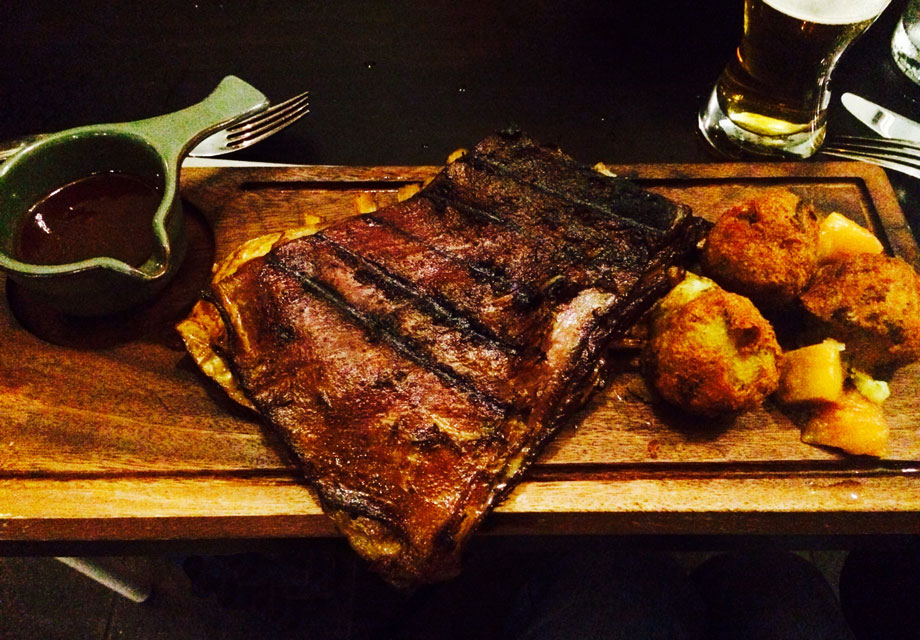