There is little to say about Los Angeles that hasn’t already been said. It is a town that needs no introduction. Home to many of the movie industry’s biggest celebrities, to world-class shopping, to decadent nightlife, to legendarily congested traffic, to sunny skies and inviting beaches, LA is a city unlike any other.

Where you rest your head makes all the difference when visiting a city with so many sides. To help you make that difficult decision, we’ve put together a list of some of the plain cool Los Angeles hotels. 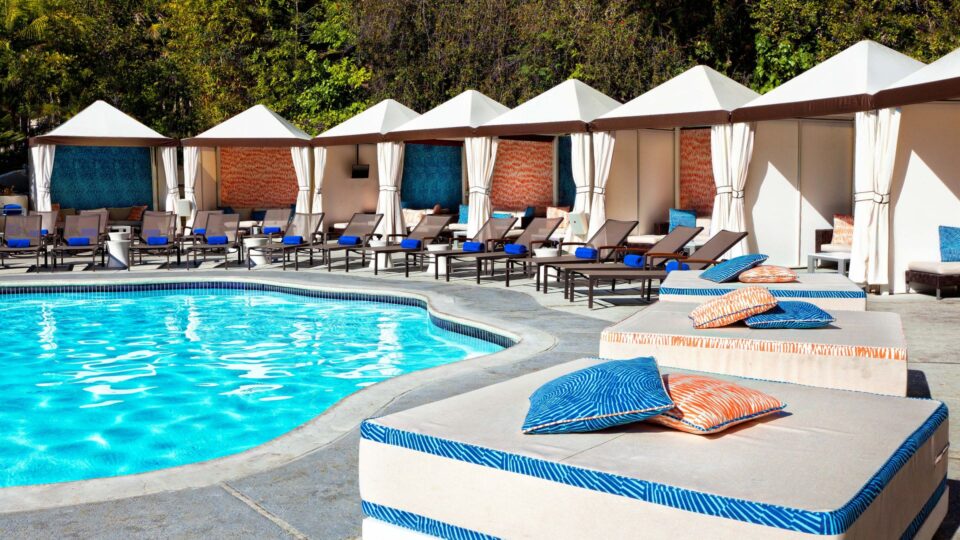 The W is a go-to hotel for exceptional hospitality and unrepentant luxury. Perfectly positioned at the foothills of Beverly Hills/Bel Air, and minutes away from the Santa Monica beaches, it’s easy to fall for the W Los Angeles in Westwood. Guests can indulge in the world-class dining at NINETHIRTY and The Backyard, or sip spirits at the Whiskey Blue lounge and bar. For signature spa treatments, head to Bliss Los Angeles Spa, recently voted one of the top 75 U.S. Hotel Spas by Condé Nast Traveler readers, or kick back poolside in a private cabana at the WET pool deck. Special offers are available for extended stays of over 30 days. 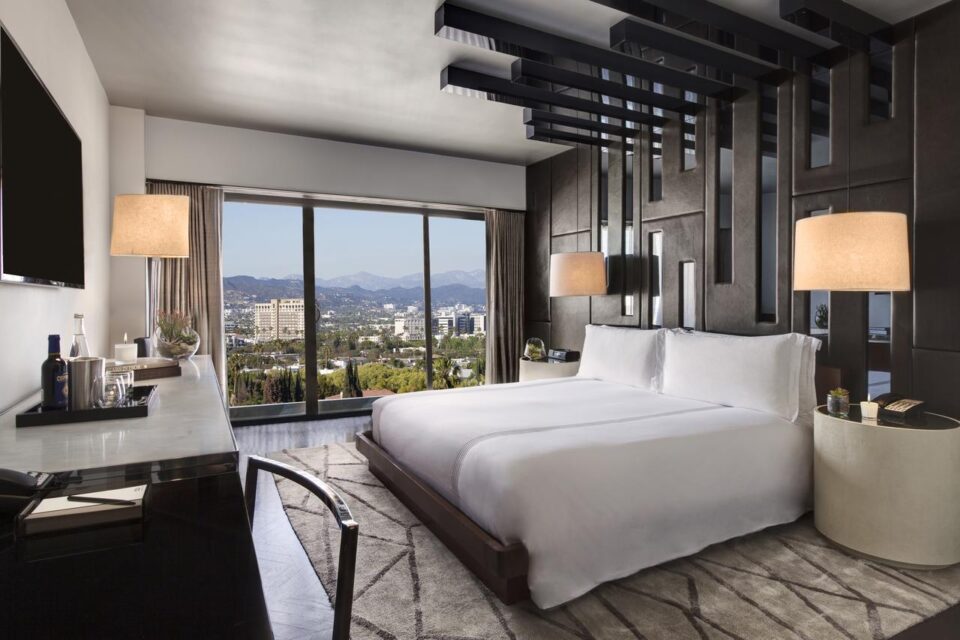 Minutes away from renowned Rodeo Drive, Sixty Beverly Hills is located in a prime spot for Tinseltown visitors. The design of the hotel blends the philosophy of West Coast Modernism with touches of authentic exotic materials, like warm textural woods and leathers. It is both bohemian and a reflection of its urban setting at the same time – think New York sophistication meets California cool. A bespoke rooftop bar and pool lounge offer an exclusive escape, while Caulfield’s Bar and Dining Room serves up culinary classics and each guest room and suite showcases the very best of Beverly Hills glamour. 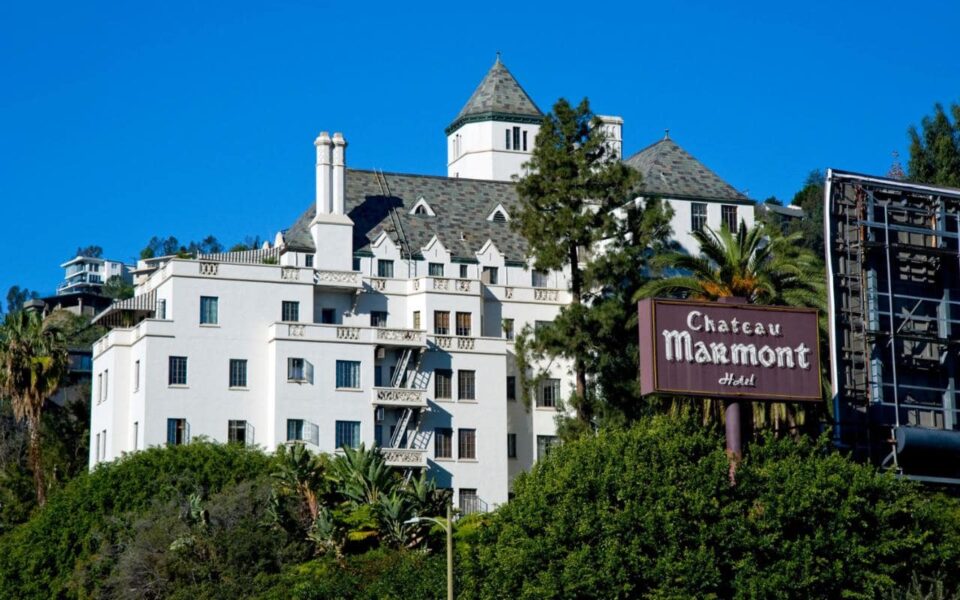 The Chateau Marmont is the Los Angeles hotel. Steeped in scandal and celebrity, the infamous hideaway was modelled after a royal residence in France’s Loire Valley. This is where guests come when they want to mix and mingle with the cream of Hollywood society (or because they are the cream of Hollywood society). Each of the sixty-three rooms, cottages and bungalows is a home of its own. Most have full kitchens, sitting areas or living rooms, and some have formal dining rooms, balconies and private terraces. Oh, and did we mention the soundproof walls? As Harry Cohn, founder of Columbia Pictures, said in 1939, “If you must get in trouble, do it at the Chateau Marmont.” 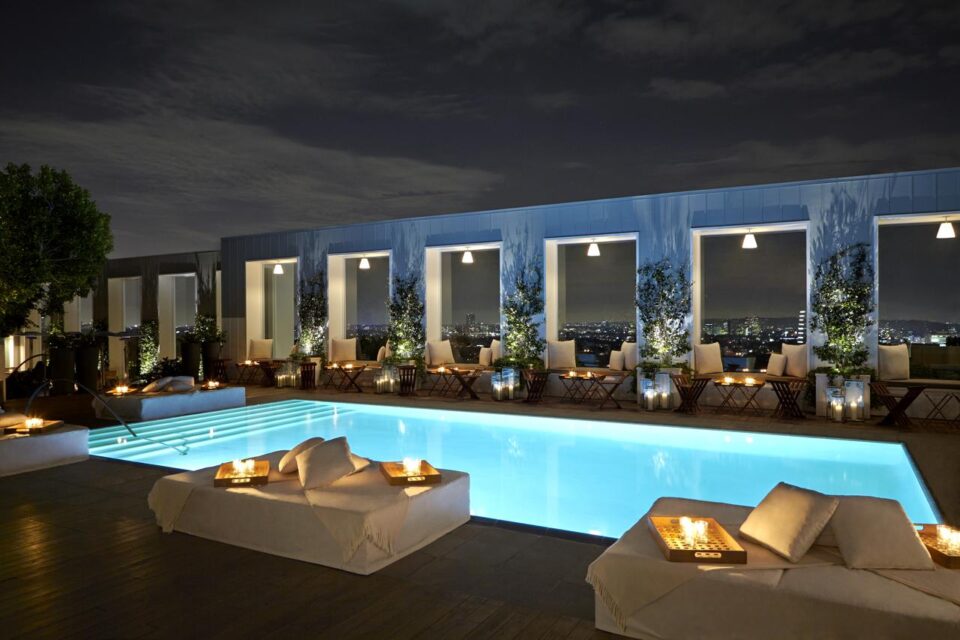 The Mondrian Hotel in Los Angeles doesn’t have a sign, but it doesn’t need it. It is, after all, one of the most famous spots in the city, a place where the high and mighty of Los Angeles come out to play. It is the quintessential place to see and be seen. Set against the beautiful backdrop of the city, the Mondrian is home to one of the city’s most talked-about restaurants and the Skybar lounge, a mainstay of LA nightlife. Don’t forget to take a dip in the rooftop pool, which not only includes a teak deck for lounging and lush landscaping, but also soothing underwater music.

EXPLORE DEALS @ BOOKING.COM  From $400 Per Night 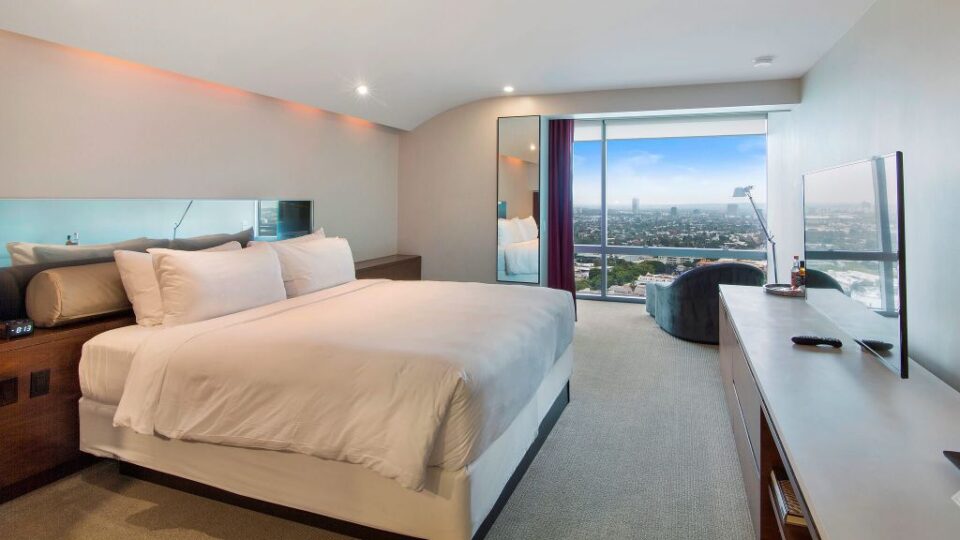 Andaz West Hollywood is more than a contemporary boutique hotel with high-style and modern ambiance. From the moment you walk through its doors, the experience is different. The entryway feels more like a living room than a lobby. There is no reception desk, instead a knowledgeable host greets you, answers your questions and checks you in using an iPad. And, perhaps best of all after a long journey, you’re treated to a complementary welcome beverage while your room is prepared. Spend your stay enjoying California fusion fare at the restaurant RH and taking in shows from some of LA’s most acclaimed artists and musicians.

EXPLORE DEALS @ BOOKING From $500 per night 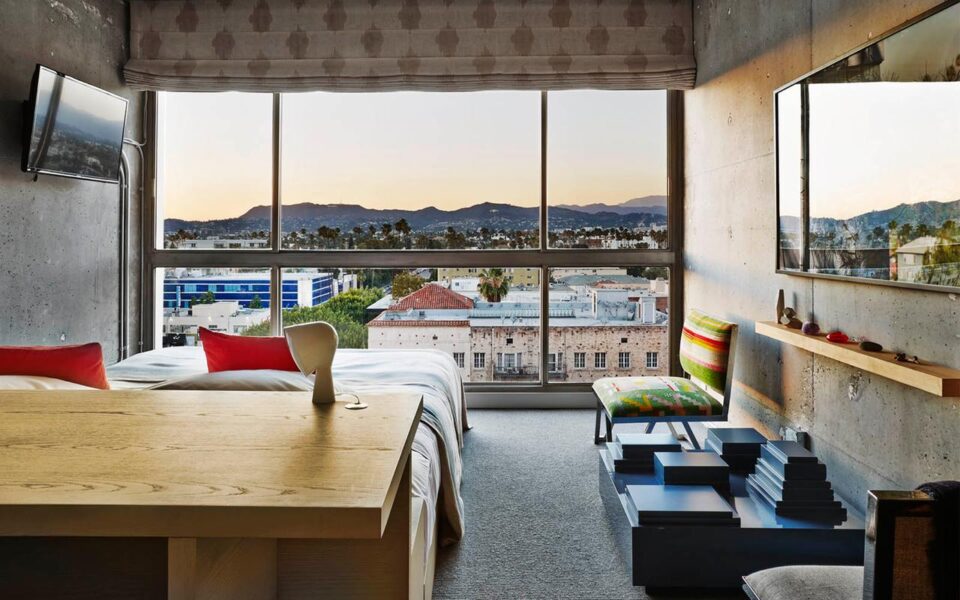 The Line is a hotel collaboration by the Sydell Group with Roy Choi, The Houston Brothers, Sean Knibb and Poketo. The mid-century building was originally designed by the same architects behind the iconic American Cement Building located farther down Wilshire Boulevard. Now redesigned with slick interiors, original artwork and well-curated amenities, The Line features destination restaurants, a café, a lobby bar, a pool deck and 24-hour room service. If guests ever find reason to leave the hotel, they’ll find themselves in bustling Koreatown, which proudly hosts Southern California’s highest concentration of restaurants, bars and round-the-clock businesses.

EXPLORE DEALS @ AGODA From $150 Per Night 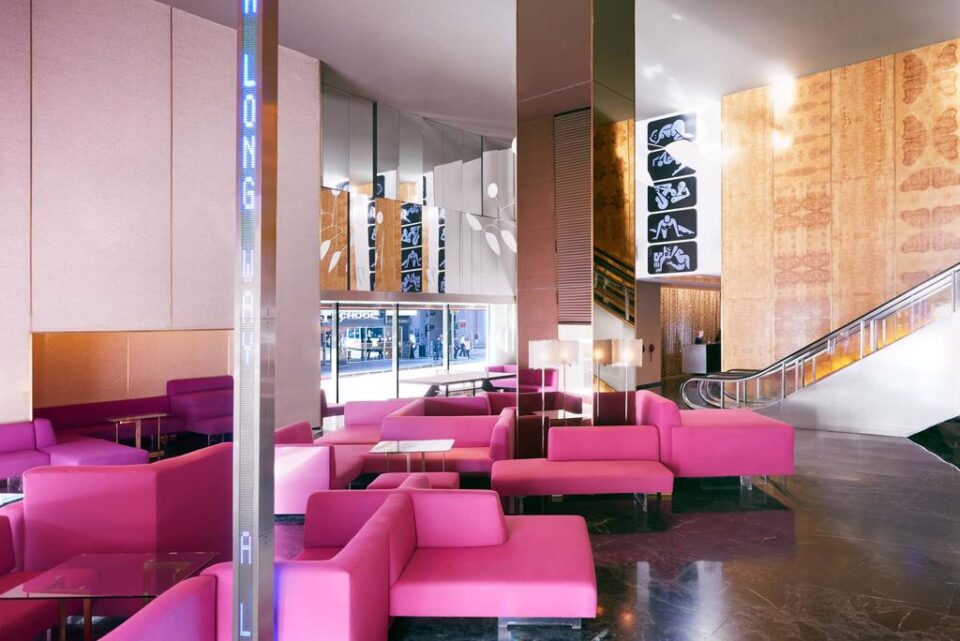 The Standard is appropriately named, as it sets the standard for excellence in Los Angeles accommodations. The unique, minimalistic hotel bears all the hallmarks of dynamic hotelier André Balazs, from a rooftop pool and bar, to the retro 24/7 diner, to the vibrant nightlife, to the stunning two-story lobby space reconfigured from the building’s old banking hall. When staying in one of The Standard’s urban party pads, be sure to check out the in-room video art installations as part of the Standard Culture program and book lessons with a ping-pong pro as a member of the SPIN ping-pong club.

EXPLORE DEALS @ AGODA From $250 per night 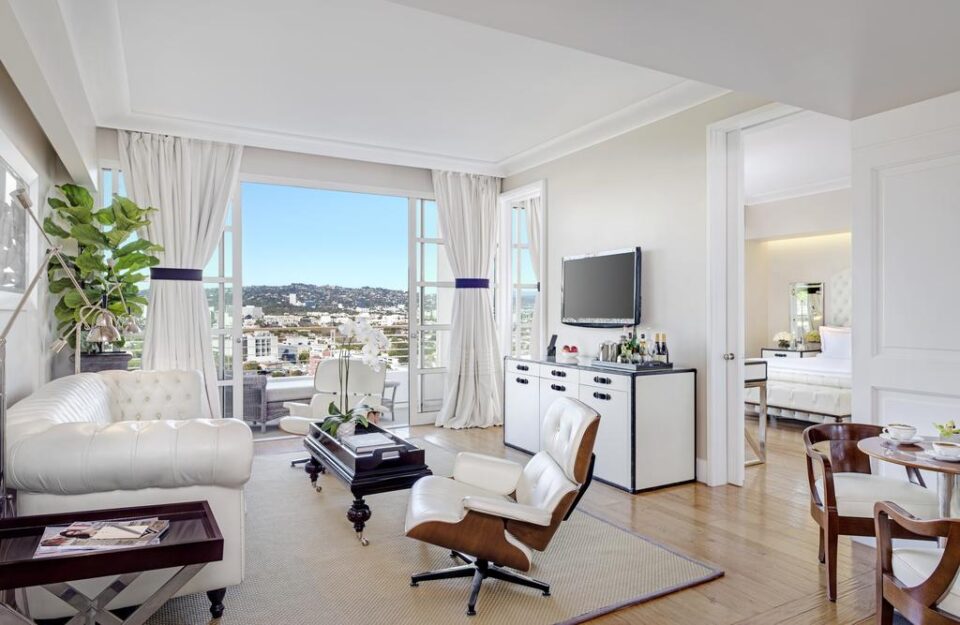 The C in Mr. C’s signature hotel brand stands for Cipriani, a family that has been internationally renowned for its restaurants, landmarked banquet spaces, clubs and residences for four generations. Mr. C Beverly Hills is a 137-room property featuring 12 suites alongside other spacious accommodations, each with a private balcony and many with panoramic views. There are also five multi-level residences available for sale or lease, all with private gardens, gourmet kitchens, plunge pools and views of Beverly Hills. For special occasions, there’s an indoor/outdoor private event space boasting incredible 360-degree city views from the 12th floor of the hotel. 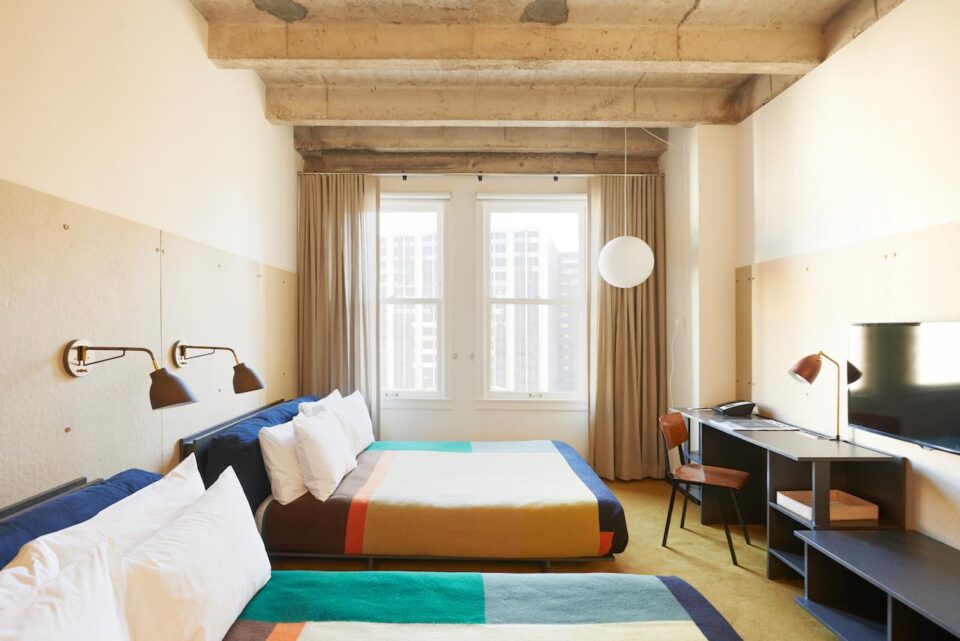 The Ace Hotel Downtown Los Angeles is barely in its infancy – it opened in early 2014 – and it’s earned itself as one of the very cool Los Angeles hotels. The hotel is located in the historic United Artists building, an ornate local gem built in 1927 for the maverick film studio. Now reborn as luxury boutique accommodations, the building is home to 182 rooms, a pool, a restaurant, three bars and the restored United Artists Theater. The Downtown LA outpost of the trendy Ace chain pays fitting tribute to its legacy by playing host to a steady stream of concerts, premieres, private screenings, conferences, seminars, performances and creative gatherings. 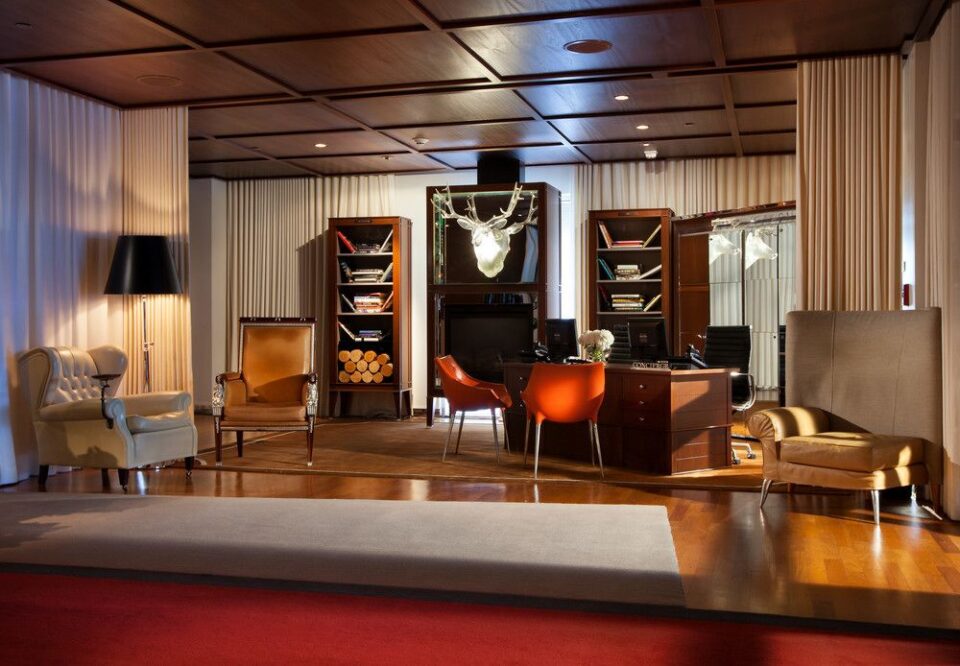 If you’re looking for luxury L.A. living with a serious injection of boutique style, creativity and fun then SLS Beverly Hills is the place to be. The amenities, from the Ciel Spa and Robert Vetica Salon, to the Altitude Pool with spectacular views of downtown are alone a huge selling point for SLS, but add to that some pretty incredible dining options: The Bazaar and Tres by José Andrés and the 297 seriously lavish Philippe Starck-designed suites and you’ve got yourself a bonafide Los Angeles must-see and must-stay.

EXPLORE DEALS @ AGODA From $250 per night