Melbourne has traditionally overshadowed Sydney as Australia’s culinary capital. While the former became famous for its café culture and hip laneway eateries, the latter seemed stuck in another era, favouring stately institutions with big water views and even bigger bills over more youthful and experimental ventures.

But in more recent years, the tide has turned in the Harbour City. Local heroes like Neil Perry, Matt Moran, and Kylie Kwong have incited a revolution in Sydney’s foodscape, bringing innovation and excitement (and many happy tummies) to a dining scene that now commands global attention.

We still love the classics. Icebergs, Porteño, Fratelli Paradiso, Tetsuya’s, Billy Kwong, Momofuku Seiōbo, the Bentley, Quay, and Rockpool retain a special place in our hearts, but we have plenty more appetite to go around. Add these cool Sydney restaurants to the bucket list for your next nights out. 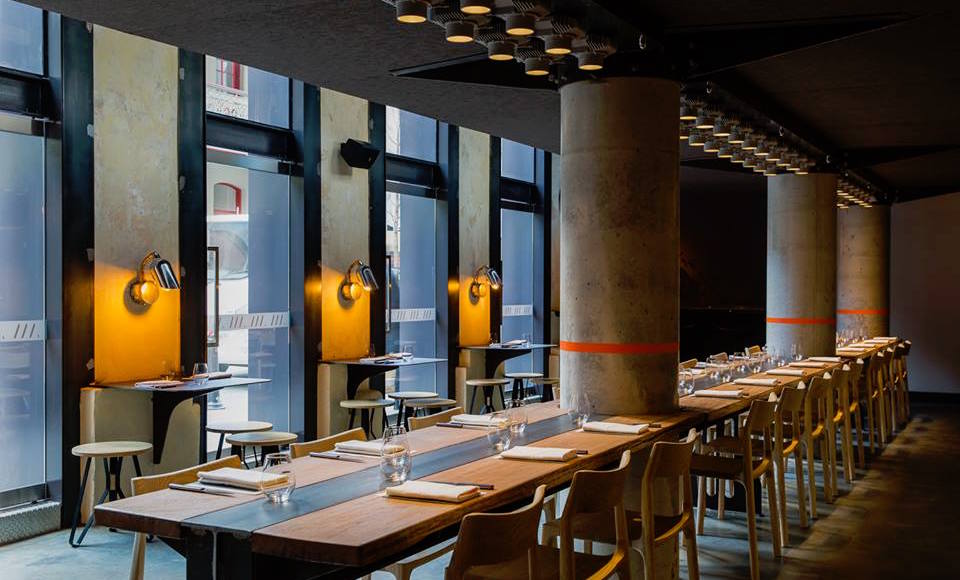 Chef Clayton Wells honed his skills at Momofuku Seiōbo, Quay, and Tetsuya’s before going solo in 2015. His powerful, provocative cuisine takes centre stage at Automata, where the décor is best described as ‘auto shop chic’ and the five-course tasting menu rarely stays the same for more than a couple of weeks. 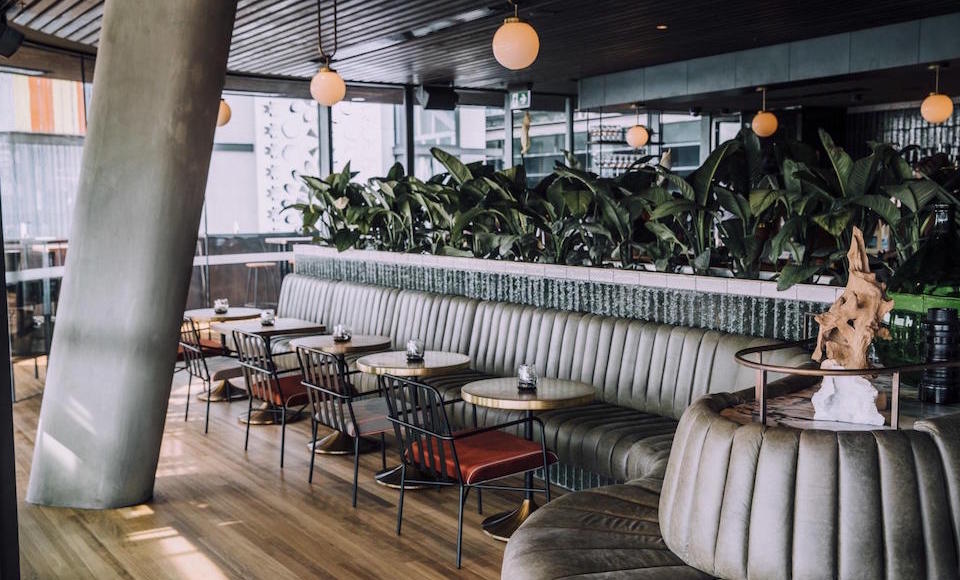 The newest addition to Matt Moran and Bruce Solomon’s ambitious three-level Barangaroo House was three years in the making and has been open for less than three months, but already Bea shows promise. Executive chef Cory Campbell, whose CV includes Melbourne’s Vue de Monde and Copenhagen’s Noma, makes fine dining fun and fashionable with a focus on quality meat and seafood and indigenous Australian ingredients. 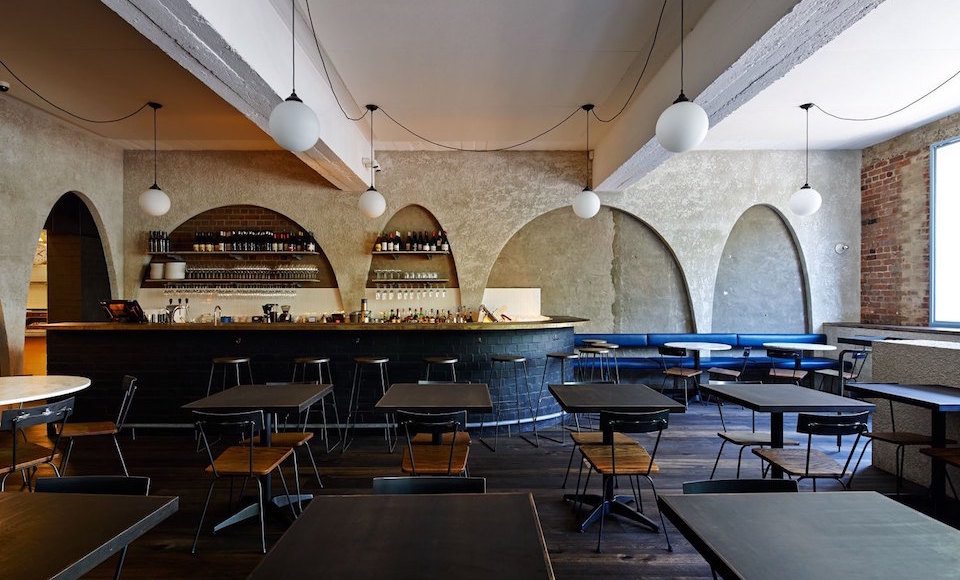 At Ester you’ll find fine dining sans stuffiness that appeals to mums and mates alike. Both the food and the fit-out are minimlist, accessible, and smart – simple but expertly finessed, with a focus on substance over exaggerated style. Be sure to try the cauliflower with almond sauce and mint, a signature dish beloved by the Sydney chefs who make Ester a regular haunt on their days off. 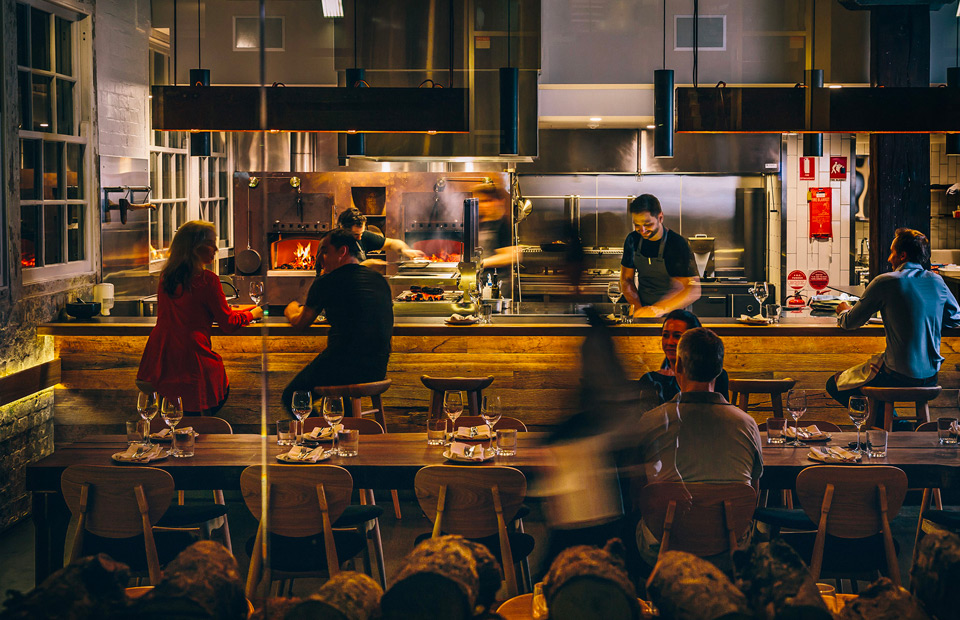 Firedoor is the name and flame is the game. Chef Lennox Hastie never takes the easy way out, eschewing the efficiency and convenience of many modern kitchens to showcase the natural beauty of wood fired cooking. Everything at Firedoor is prepared over an open flame and cooked to order with almost obsessive attention from Hastie, who grills like Claude Monet paints lilies. 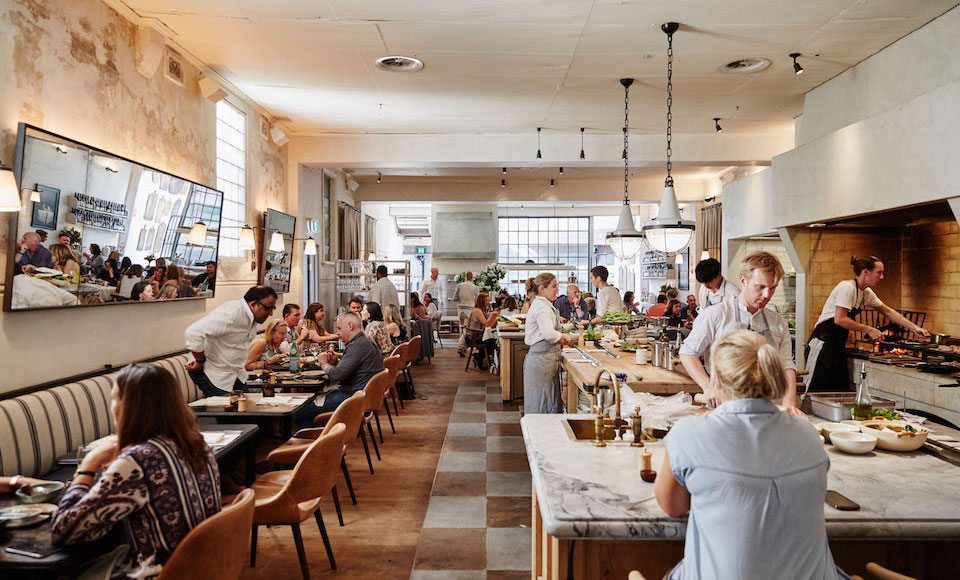 A produce-driven restaurant in Merivale’s Oxford Street, Fred’s is all about top-notch Australian ingredients cooked with care. Chef Danielle Alvarez builds her menu around seasonality and combines old-world techniques with innovation, which you can personally witness thanks to the restaurant’s arrangement around a central open kitchen. 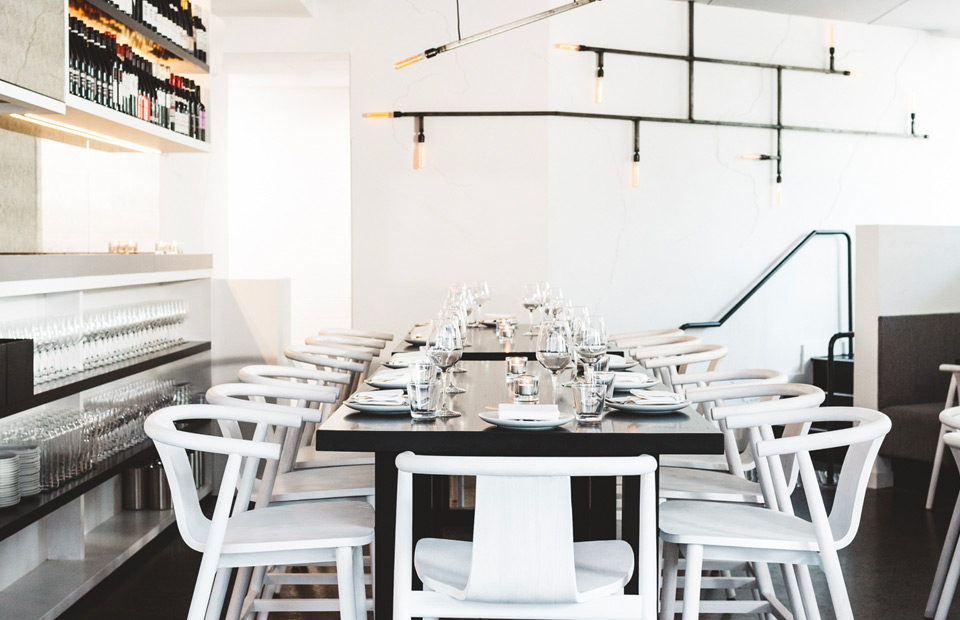 Cultures collide at Blanca, a Bondi Beach outpost the owners describe as “a blank canvas where our diversity and travels come together.” The menu manages to simultaneously feature elements of Mediterranean, Japanese, and Scandinavian cuisine, while the influence of Australia can be felt in the wine list. Traditionalists may find the menu dizzying, but for the experimental, it’s a welcome addition to the Sydney food scene. 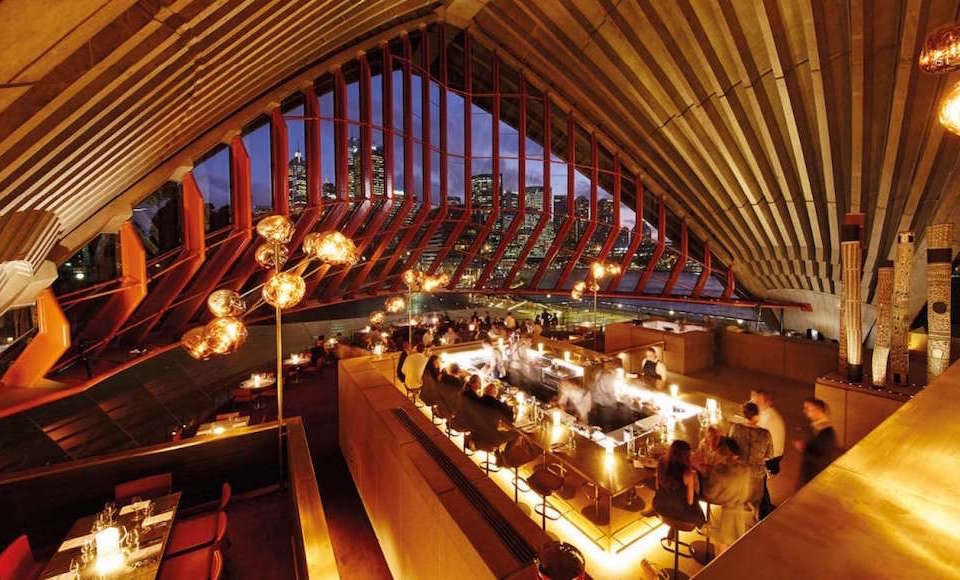 Bennelong is back and better than ever after a 2015 revamp that brought celebrated Aussie chef Peter Gilmore aboard. There are multiple ways to eat here: an à la carte restaurant downstairs, the Cured & Cultured counter up a level, the theatrical Circle dining room, the bar at the top, and for a splurge, the exclusive chef’s table. It’s hard to go wrong, whatever you pick, when you’re dining inside the architectural majesty of the Opera House sails. 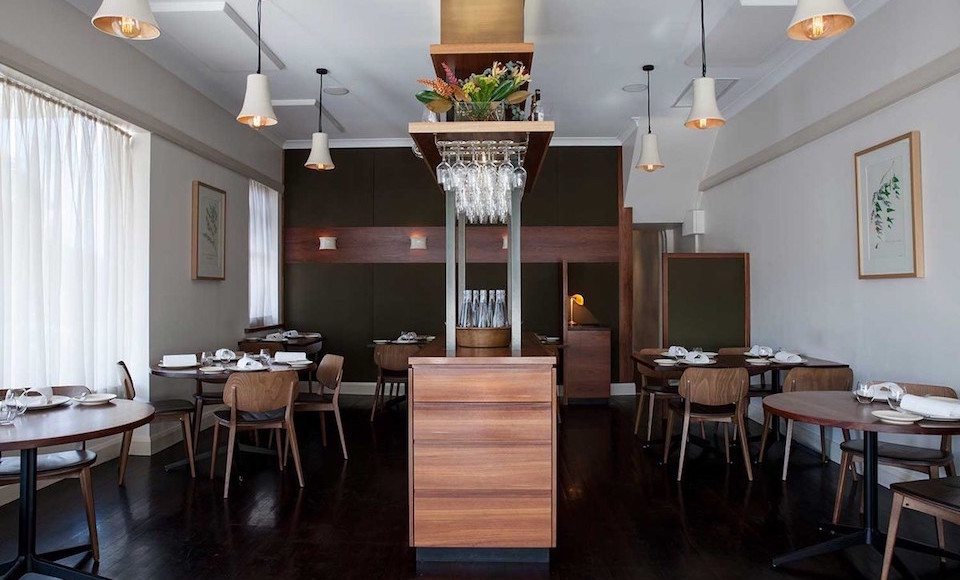 It’s easy to miss the diminutive Sixpenny, tucked away in a corner terrace not far from Stanmore Station. Sixpenny makes a point to forego excesses in favour of a more economical approach to both food and furnishings, but what it does, it does exquisitely well. Anything you taste, touch, hear, smell, or see has been curated and crafted with a tremendous level of care that earns ongoing accolades. 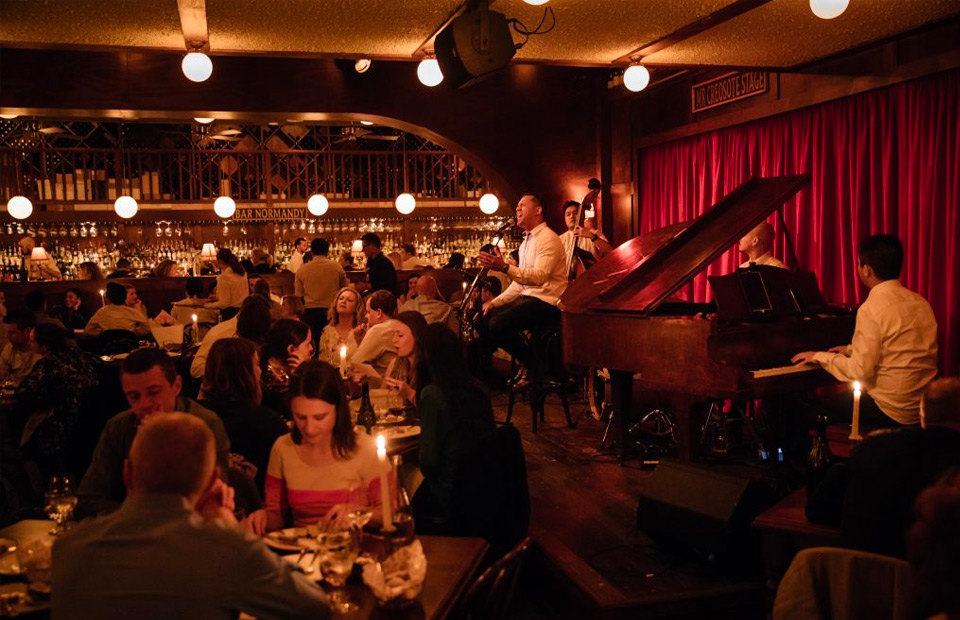 Restaurent Hubert brought a breath of fresh French air to Sydney in 2016, and has since made many a ‘best of’ list thanks to a masterful menu, a warmly inviting atmosphere (complete with 100-seat theatre), and a team pedigree that includes Baxter Inn, Frankie’s Pizza, and Shady Pines. Hubert is impeccably realised and impossibly romantic, with a vintage take on dining out and atmosphere in spades. 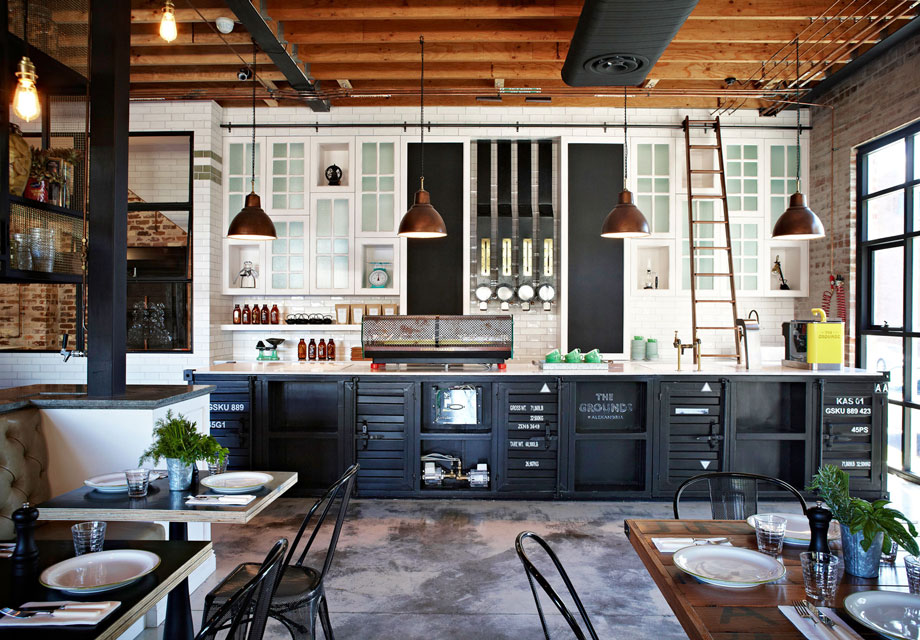 Located in a former industrial precinct from the 1920s, The Grounds of Alexandria is a landmark coffee roastery, café, sustainable garden, and one of Instagram’s most tagged foodie destinations. You’ll be in for a wait so get in early, pop your name on the list, and pass the time wandering the artisan market until your table’s ready. Alternatively, try Alexandria’s younger, CBD-based sibling, The Grounds of the City. 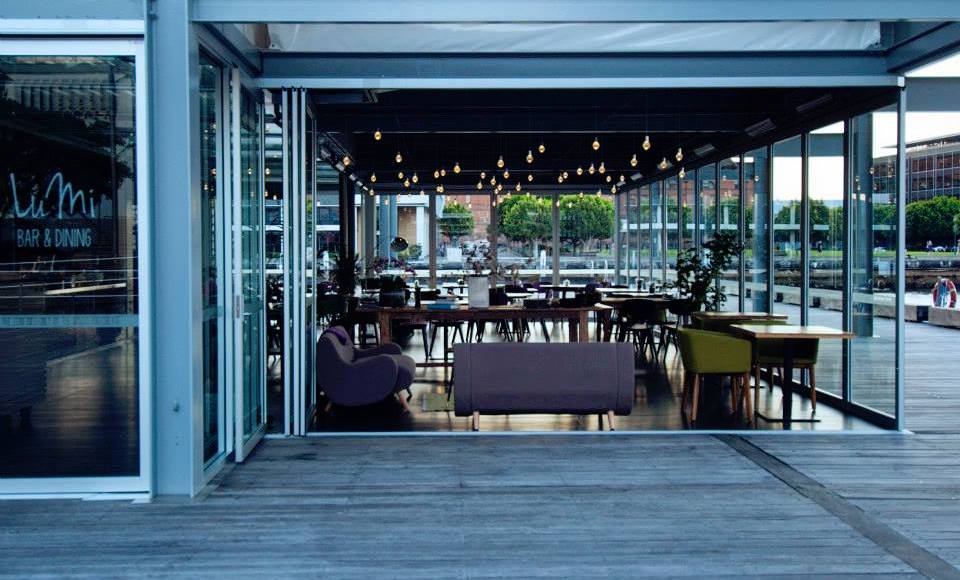 With a prime backdrop of the Pyrmont waterfront, LuMi Bar & Dining is an idyllic dinner destination for relaxed fine dining. The food is Italian with a Japanese twist, and served only in a degustation menu designed around seasons and market availability. Choose between a 5-course, 7-course, or 10-course feast, and pair it with something from the Italy-focused wine list. 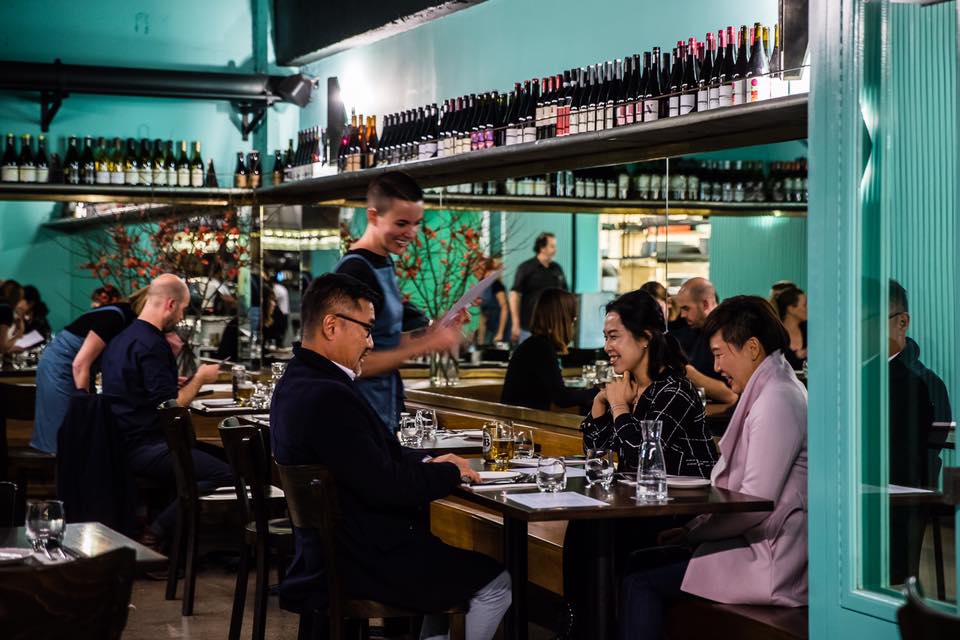 The Moon Park team’s new venture, Paper Bird, is an all-day East Asian eatery in Potts Point. Korean cuisine takes the lead, with influences from China and Japan coming into play for variety. Go for the fried chicken and prepare to weep tears of crispy, delicious joy. 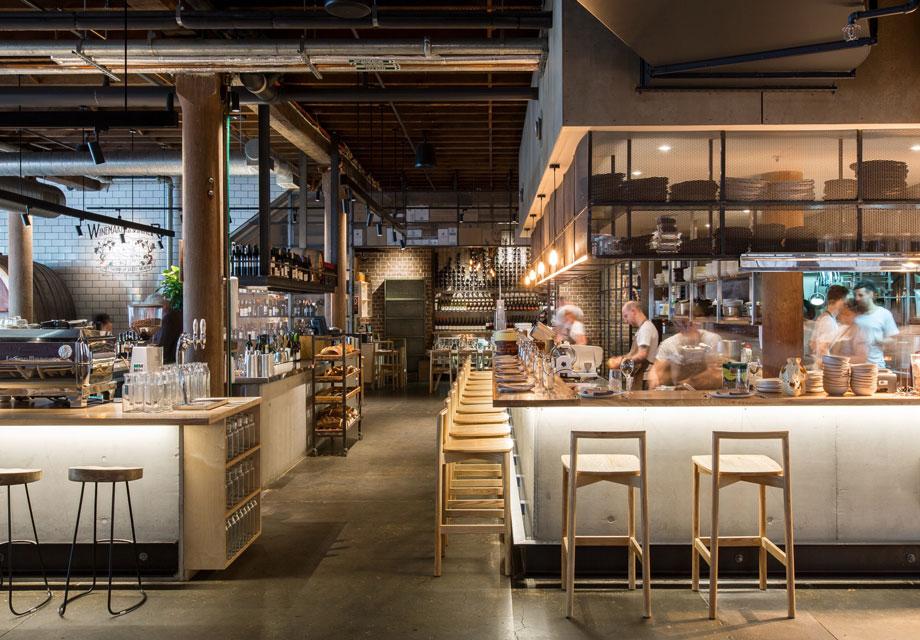 If you want fine dining with an edge, Nomad is your go-to Sydney restaurant. Local seasonal produce and traditional culinary skills make up the menu. Add to that an all-Australian wine list and an open plan kitchen, and you’ve got an effortlessly chic dining experience in the heart of Surry Hills. 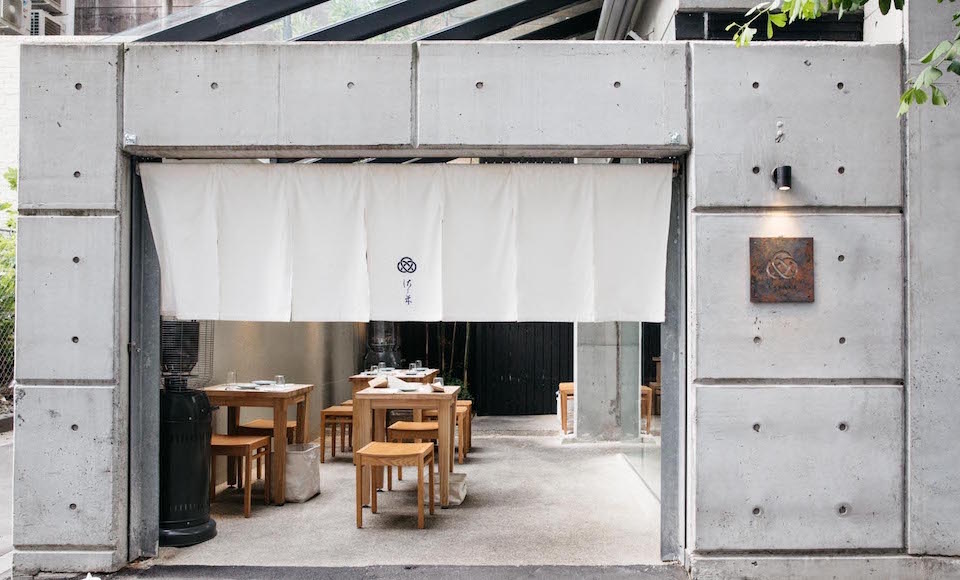 New to the scene last year, Sasaki prioritises simple home cooking inspired by owner/head chef Yu Sasaki’s youth in the Japanese countryside. The tiny Surry Hills spot is spare but intimate, a heartfelt and nostalgic ode to tradition, childhood, and food made with a mother’s love. At $80, the 10-course omakase menu is a steal. 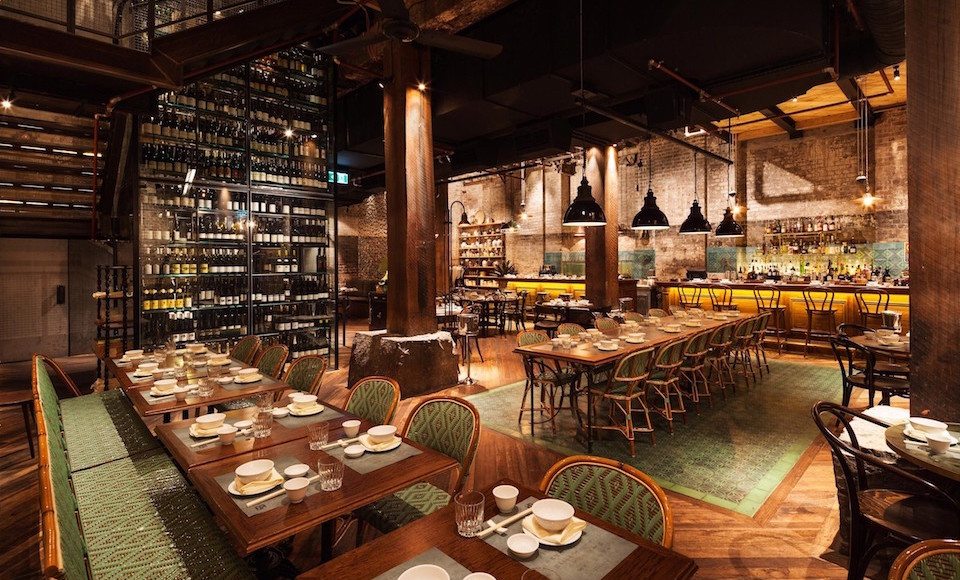 Mr. Wong elevates dim sum to a level you didn’t know was possible, dishing out what are likely the best dumplings you’ll find this side of the Great Wall. You can easily spend hours working your way through the menu and wine list, and soaking up the 1930s jazz-era Shanghai vibe. Bigger is better at this a two-level temple to Cantonese cuisine – including the line, so come prepared to wait for the privilege of experiencing this Sydney institution. 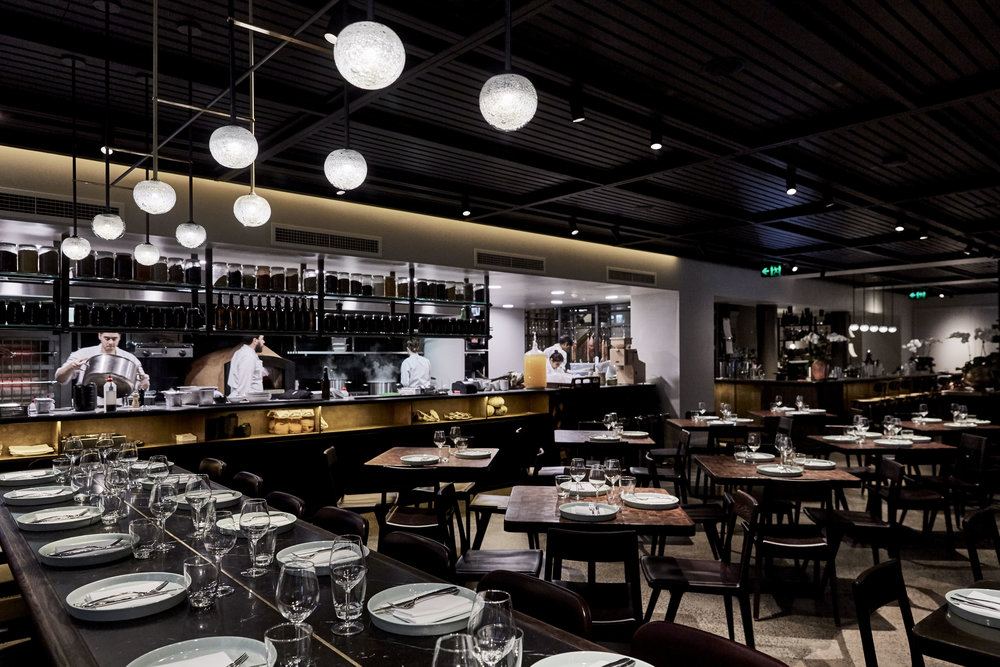 Like meat? Then you’ll love Mercado in Sydney’s CBD. This has fast become one of our Friday night or lunch time business meeting hot spots. Mercado is operated by Nathan Sasi, the man behind Nomad in Surry Hills, bringing together the grand atmosphere of Moorish Spanish dining with a casual yet elegant dining experience. 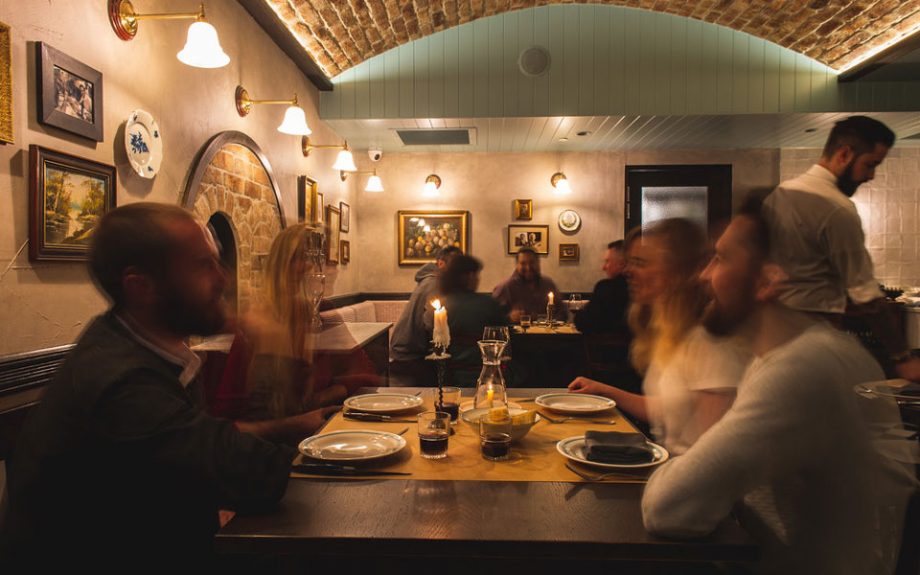 The love child of a classic Italian restaurant and a fancy Sydney cocktail bar, Bistecca is one of Sydney CBD’s worst kept secrets. Unashamedly Italian, Bistecca is dedicated to Tuscany’s revered cut of steak, bistecca alla Fiorentina, alongside an Italian grape varietal wine focus and a cocktail list featuring a variety of Negronis. The adjoining wine store is nothing to sneer at either. If you particularly like something, why not buy a bottle to take home? 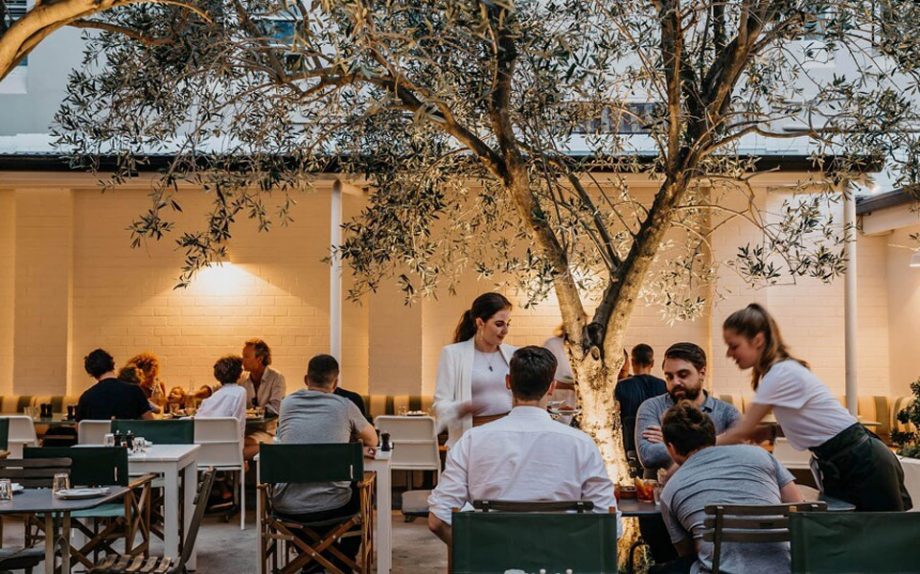 Spent the day at Bondi beach? Totti’s is where leisurely 5pm drinks go to become a dinner to remember. Unpretentious yet top-notch, this casual Italian eatery has one of the best wood-fired chefs in the country, a light-filled indoor space and a courtyard where you can eat al fresco with olive trees. What more can you ask for? 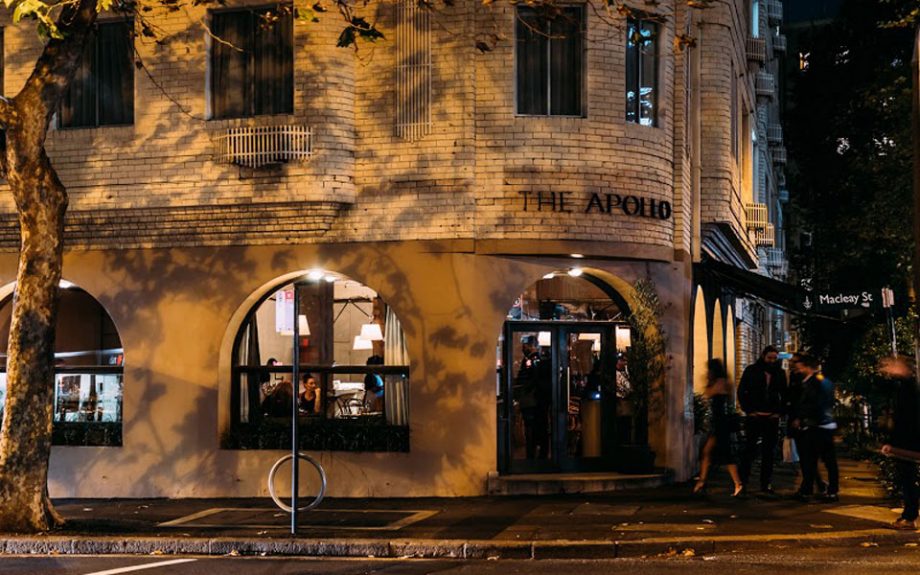 The Best Sneaker Shops In Sydney