Dwayne ‘The Rock’ Johnson is widely acknowledged as being a pretty good dude.

Not only is he a relentlessly positive celebrity devoid of much of the bullshit that comes with fame (plus he makes a killer tequila), but the affable former professional wrestler and current Hollywood star has founded his own charity which works with at-risk and terminally ill children, has donated thousands to disaster relief over the years and has worked with the Make-A-Wish Foundation on numerous occasions.

“20 years ago my buddy Bill Gates and I debuted the very first ever XBOX console to the world,” he announced on Instagram.

“Now two decades later, I’m partnering up with Microsoft once again to launch their brand new XBOX Series X to the world. But the best part about this partnership is I have the absolute privilege to deliver one-of-a-kind ‘ROCK XBOX Series X’ consoles to 20 different children’s hospitals that will eventually reach over 50,000 kids! These kids are battling through their illnesses with incredible bravery… [you] show me and the world what real strength means.”

While we’re suitably impressed with Johnson’s philanthropic endeavours, we were also impressed by the timepiece he was wearing during the announcement: a Breitling Superocean Heritage B01 Chronograph that retails for just under $11,000. 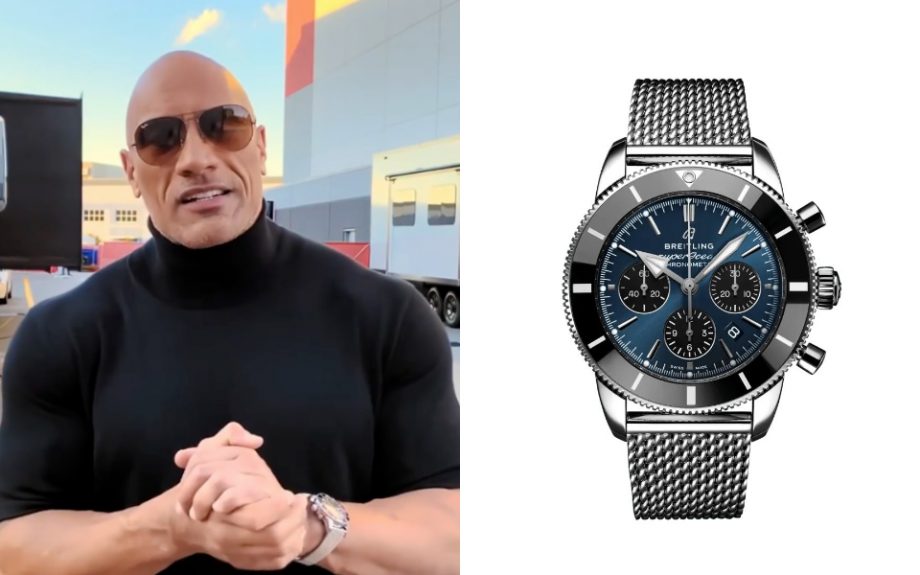 The 44mm stainless steel watch is available in a variety of different colour and strap combinations, but Johnson’s chosen a rather fetching black dial / dark blue bezel combination with a very retro mesh steel bracelet.

Inspired by the original Superocean from the 1950s, the Heritage is nonetheless a highly capable, modern watch: water-resistant to 200m and a COSC-certified chronometer, it’s an elegant, inspired choice for a man who normally rocks (pardon the pun) much bulkier, more aggressively styled watches.

Johnson is an avid watch collector, and has been spotted with everything from Panerais, IWCs, Hamiltons, Orises, Rolexes and unsurprisingly, other Breitlings on his wrist both on and off the film set.

Bill Gates, however, is a more interesting point of comparison. Despite being one of the wealthiest men on earth, Gates doesn’t indulge in watches: he famously wears a Casio Duro ‘Marlin’, which you can easily pick up for less than $100.