Queensland University’s Creative Advertising lecturer, Michael Klaehn, says the word “love” was tweeted more than 2.5 billion times in the past year and today “it will be the hottest word on the Twitterscape, most likely paired with one of the top 10 global love Emojis or hashtags”.

“Twitter has just released its global top ten love Emojis and hashtags which demonstrate the incredible impact social media is having on the worldwide romance industry and how people communicate,” Klaehn said.

Here you go, in case you really need to know: 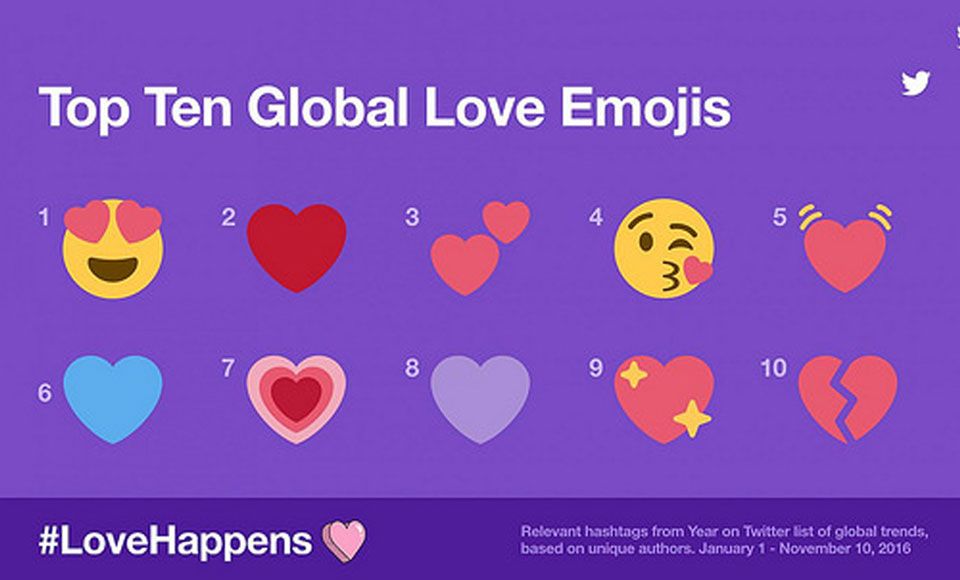 The number one love Emoji is that face with love hearts for eyes, then the red heart, then two hearts, that face blowing a kiss and that weird “vibrating heart” to round out the top five. Number 10 is a broken heart.

The top hashtag is not surprisingly #Love, followed by (oh god make it stop) #Blessed. #ValentinesDay comes in at number four and number 10 is the slightly desperate-sounding #LetMeLoveYou.

“At the same time marketers are trying to capitalise on Valentine’s Day via social media campaigns,” Klaehn says. “Air New Zealand has run quirky Valentine’s Day campaigns for the past few years and the latest asks people Are you #GoingTheDistance this Valentine’s Day?”

Some campaigns are a little strange but still entertaining, Klaehn says, like the Snuggle Bear campaign which lets people upload their own photos and send to their Valentine.

“Social media is now so mainstream in terms of communication that it will be very popular today for people to declare their love for their partners using Twitter, Facebook, other social media, virtual cards, and automated videos like the Snuggle Bear singing ‘I had the time of my life'”, Klaehn explains.

“The ability to use multimedia so easily and to send it to your special Valentine via the internet anywhere in the world makes it extremely appealing.”

But that doesn’t mean you should, internet.

That doesn’t. Mean. You. Should.