Raw. Uncompromising. Sharp. Brutally fast. Oddly spacious. These are the words that come to mind when you get handed the keys to one of the year’s most anticipated performance cars.

Unlike our other test drives though, this one doesn’t wear an exotic European badge. What it does wear is the ‘RS’ moniker tacked to the back of an iconic blue oval. This a run of the mill Ford Focus hatchback on steroids.

Quick history lesson: Ford’s RS name was born from the world of rallying where the American manufacturer spent decades tearing up the gravel. By the late 70s, the ‘Rallye Sport’ name was pretty much set in stone with the Escort RS1800 cleaning up more than half a decade’s worth of competition and taking out a manufacturers’ title along the way.

Today, Ford’s ‘Rallye Sport’ name has evolved to be known simply as ‘RS’ – a code given only to the company’s most formidable performance cars.

Fast forward to 2016 and we now have the successor to 40 years worth of racing lineage in our hands.

We put the Focus RS to the test in three separate driving conditions around Sydney to see how the little blue beast would hold up.

Let’s get the important stuff out of the way. The new Ford Focus RS is a purist’s car designed to push the hatchback’s chassis to its limits. In pursuit of speed and driver involvement, it also comes with a few compromises in the practicality department. Here’s what you need to know.

It only comes in a manual: For super fun driving purposes, the quick and precise six-speed box is great. The sixth  gear is fine for economical highway cruising whilst lower down the cogs you get all the power you’ll ever need (more on that later).

Lest we forget, there’s also a heavy clutch used to harness the car’s big power. I drive a manual car on the daily and I can say that driving the RS for a few days in Sydney’s start/stop traffic ensured I wouldn’t need to train leg day ever again.

Just the left leg anyway. The clutch is springy and if you forget to depress hard enough between shifts, you’ll stall it. I did. Twice.

You’ll only use half the driver modes: Ford built this car for fun both on and off the track. On public roads drivers will only really use two modes – Normal or Sport. In Normal mode the car is relatively sedate, with settings such as AWD, steering, dampers, exhaust, engine and electronic stability control all complying (just) to regular driving habits. Mash the pedal and the car moves well but not with the manic pace of the beast hiding within.

Toggle over to the Sport mode and what lies beneath the RS is unleashed in all of its fury. The aforementioned settings all switch into a more agile state except for the dampers and ESC. The steering is immediately sharper, the idle rpm sits higher and the exhaust note is louder. There’s even a welcome addition of rally-style pops and bangs on quick upshifts or backing off the throttle in lower gears. It had us giggling like a joyous little girl around town.

Toggling one over once more to Track Mode and everything goes into an aggressive Sport mode with dampers and ESC now joining the party. Accuracy and precision on the track is the name of the game and it’s only there that these limits can be effectively tested. No one’s stopping a driver from running Track mode on public roads, but there’s no point since you won’t be going fast enough and the stiffer ride setting will just shatter your back. Save this one for the track.

And then there’s the controversial Drift mode which the local police want banned in all local sales of the Focus RS. Drift mode tweaks the car’s AWD torque splitting system to send more power to the rear wheels whilst also softening the dampers and steering to make the car easier to hold slides. We didn’t attempt this one since it’s a track setting that will see its true potential on the track. Men have tried on public roads and failed.

Steering circle isn’t great: This isn’t necessarily a bad thing. It’s just a trade off for using a short rack to give drivers the most precise steering feel possible along with razor sharp response. In return, the car pays for it with a poor turning circle.

Insane amounts of grip: Mechanical grip is supplied through Ford’s AWD torque vectoring system which can send 100% of power to the front wheels when there’s no slipping. Once there’s steering input or slipping, the torque can be split with up to 70% of power going to the rear. In my wet drive through the mountains, the RS lapped it up like a walk in the park. No aqua planing, no unsettling over bumps and generally poised throughout all types of corners. It gave this driver confidence to push that little bit harder. The car is also equipped with Michelin Pilot Cup 2s which provided supreme levels of racing grip wrapped on 19-inch forged black alloys.

The Focus RS ditches the standard grocery engine and borrows its heart directly from the bigger Ford Mustang. That means a 2.3-litre turbo four cylinder given an even higher state of tune to get it to 257kW of power and 470Nm of torque. These figures are of course indicative of the overboost mode which elevates power for up to 15 seconds. Official torque is only 440Nm whilst it does the 0-100km/h dash in 4.7 seconds.

The ferocity of the engine in Sport mode was so intoxicating that it had us filling up two times in a matter of just five days. The automatic start/stop engine feature helps but only just. This car was meant to be enjoyed and we did just that. If you must know, Ford reckons it does 7.7L/100km. Driven the way it’s intended to be, you can wave that single litre digit goodbye – with a fat smile on your face.

‘Made in Germany’ usually brings a sense of pride to any car interior. The German-made Focus RS must have missed that memo and opted for the American parts bin instead. The door handle plastic in our car had a minor gap which gave a squeaky noise every time I closed the door. There’s also a lot of dark plastic in the cabin and the oil/water/boost gauge looks a tad childish.

Yes, this is a Ford after all and the interior finish is one place where the car falls behind. And we love it for this very reason. Everything in the interior is there purely for function rather than to satisfy one’s aesthetic tastes.

The Recaro reclinable bucket seats lined with leather and Alcantara were a dream to sit in through traffic and long distance drives. The gauges, whilst slightly archaic in design, provided all the diagnostics we could ever need, and the hard cheap plastics around the dash? That was the least of our worries when driving the RS ragged and having the time of our life.

For a driver’s car a winner was the fact that the RS could fit five passengers with luggage and still be fun to drive. Elements of the standard Focus also remain intact with dual USB ports and cup holders tucked away beside the front and rear seats.

Ford’s SYNC2 entertainment system was a bit slow to find our phone but that was a non-issue since the engine noise is all you’ll ever want to hear.

The RS is a special breed of machine which relies on the wits of direct driver input, a sublime six-speed manual transmission, grippy tyres, a spritely engine and a sophisticated AWD system.

It’s all about getting the job done the old school way.

Yes, the interior is bland and lacks luxury, but customers of this car aren’t paying for that. They’re paying for the unadulterated thrills behind the wheel provided by the car’s underpinnings. If you want the same sensation in a more refined package, go for the Mercedes AMG A45.

If you seek endless bouts of fun and don’t mind a harsher ride, then the RS is your car.

Prices for the Focus RS start at $50,990 with the optional forged black alloys and Michelin Pilot Cup 2s asking an additional $2,500. 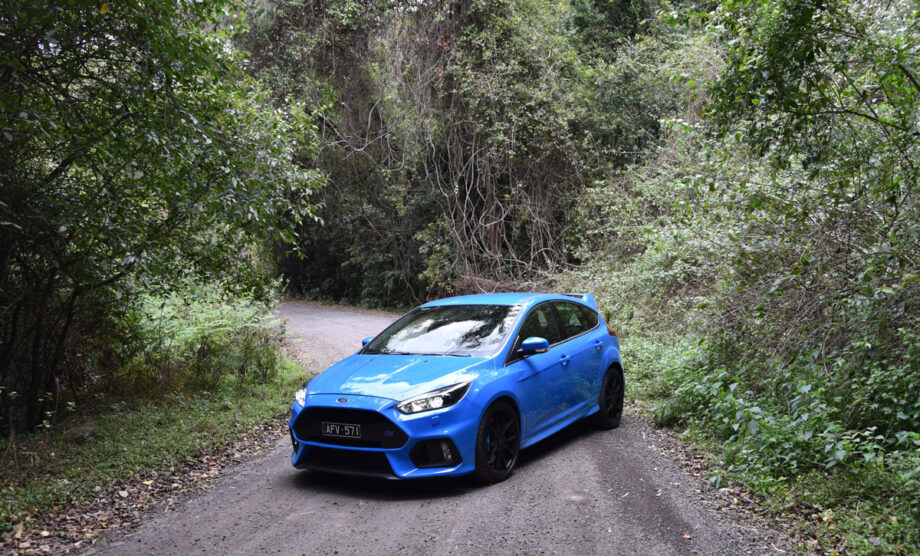 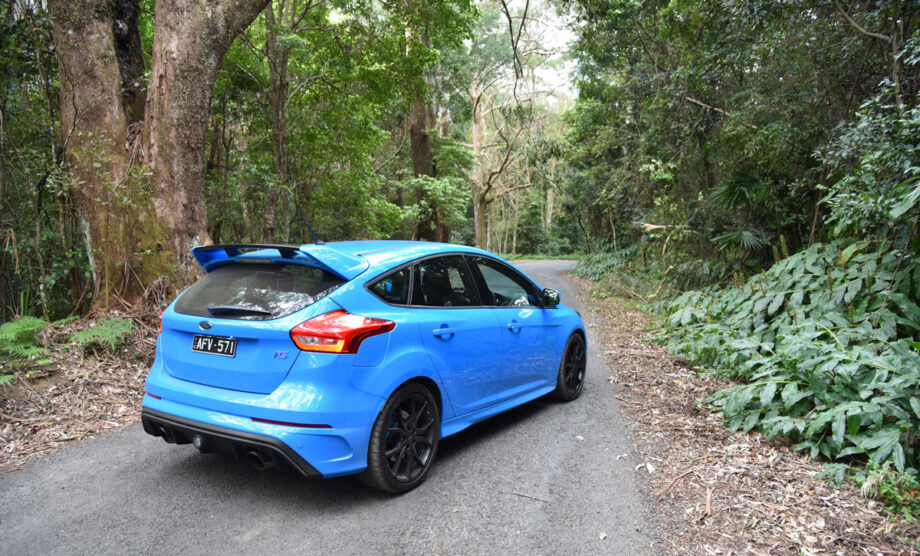 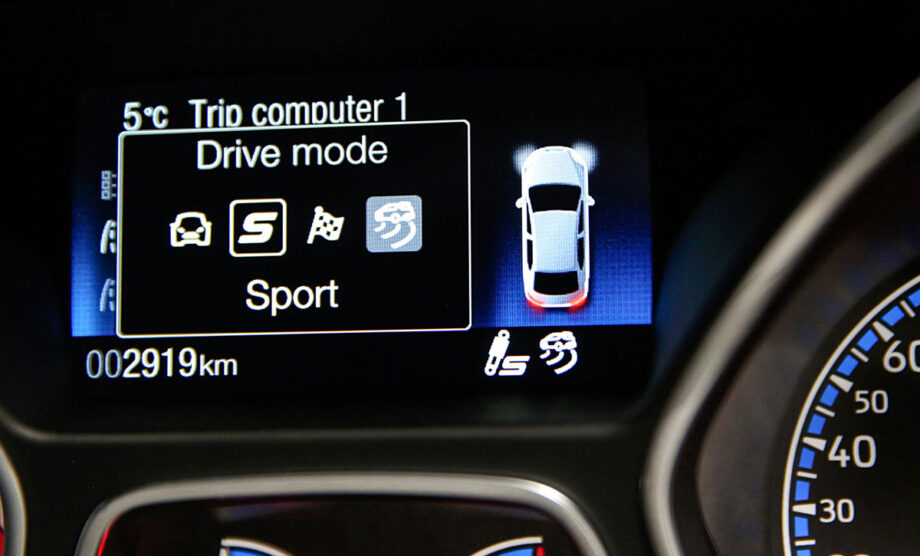 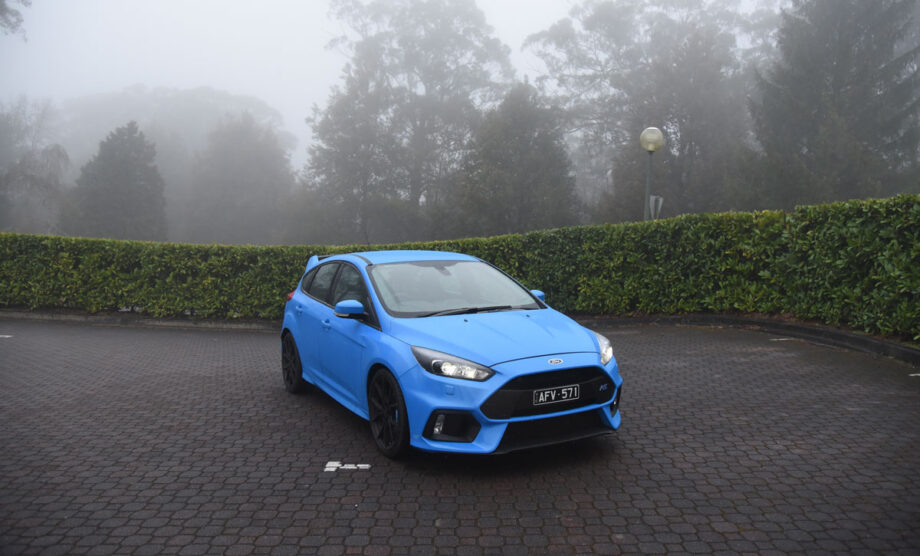 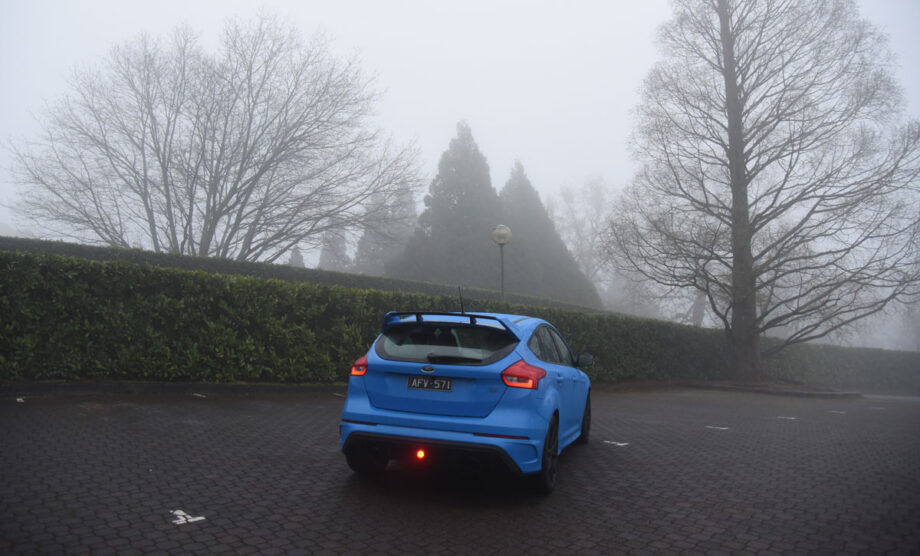 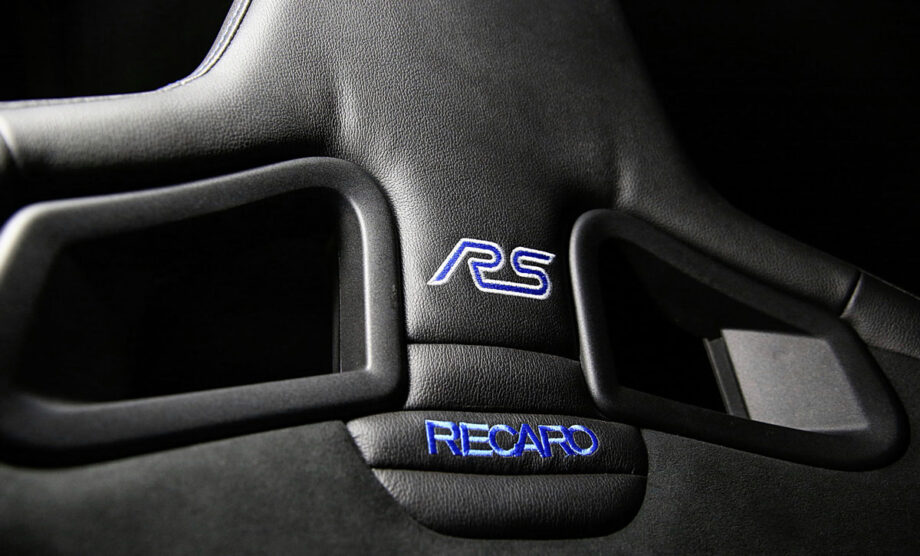 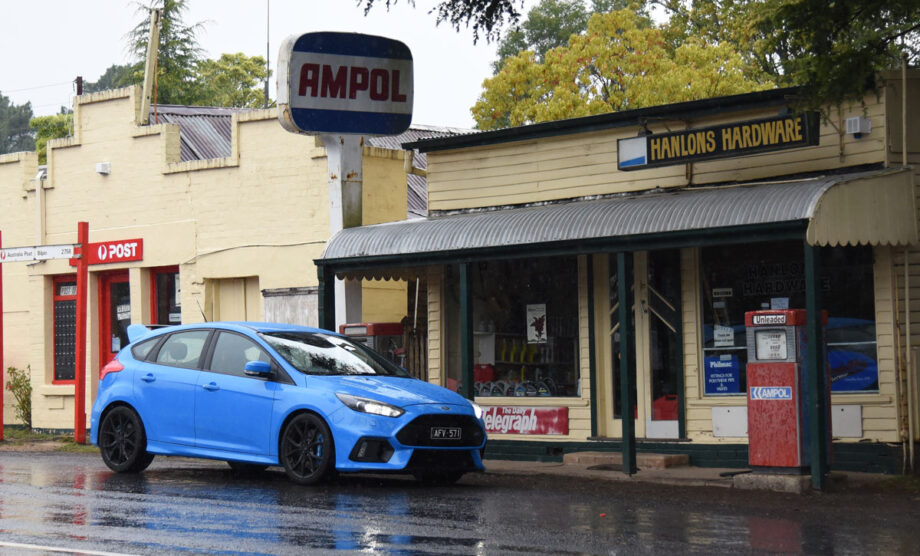 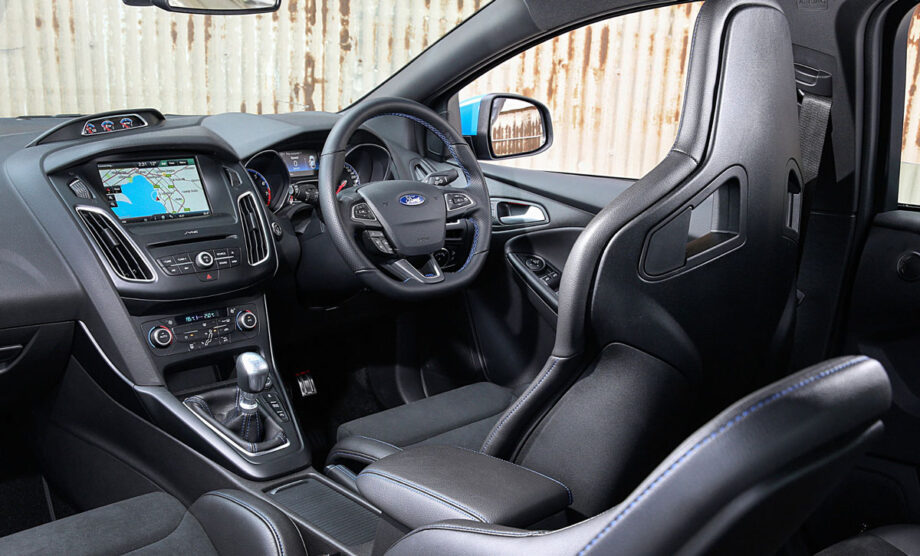 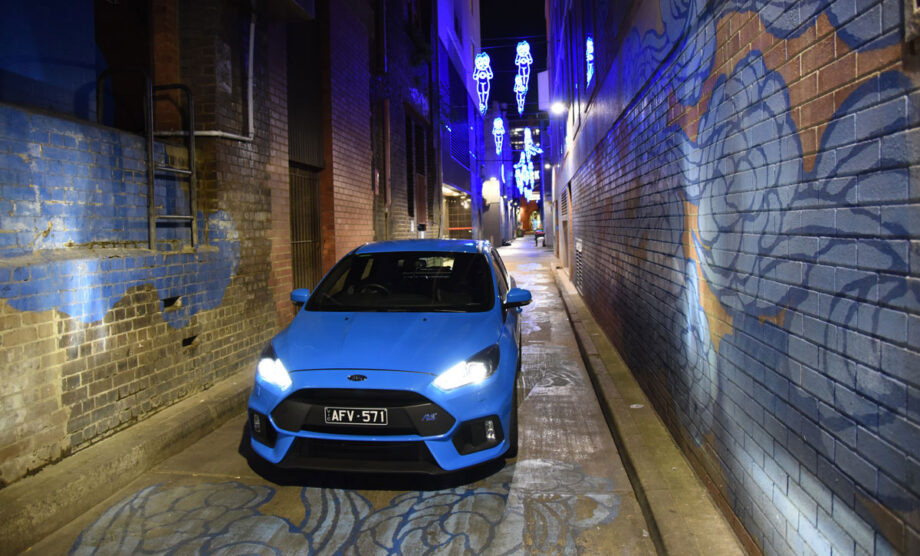 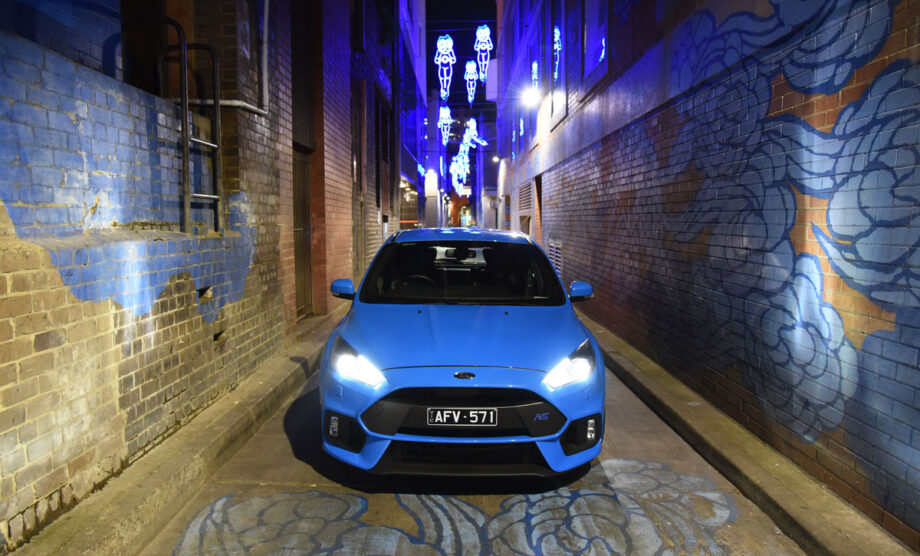