IWC’s Mark-series of Pilot’s Watches can comfortably be considered as being some of the most iconic within the pilot’s watch category. The series has a long history, with the first model being launched in 1936. Back then, IWC was one of the first companies to produce a watch that was able to withstand the rigours of military flight, such as vibrations, extreme temperatures, and ever-changing light conditions.

The IWC Pilot’s Watch Mark IX did exactly that. It arrived with a black dial, luminous hands and a caliber 83 movement that could withstand shocks and changing temperatures. IWC didn’t actually officially call it the Mark IX, and the follow-up model, the Mark X, was named as such by the British Ministry of Defence. 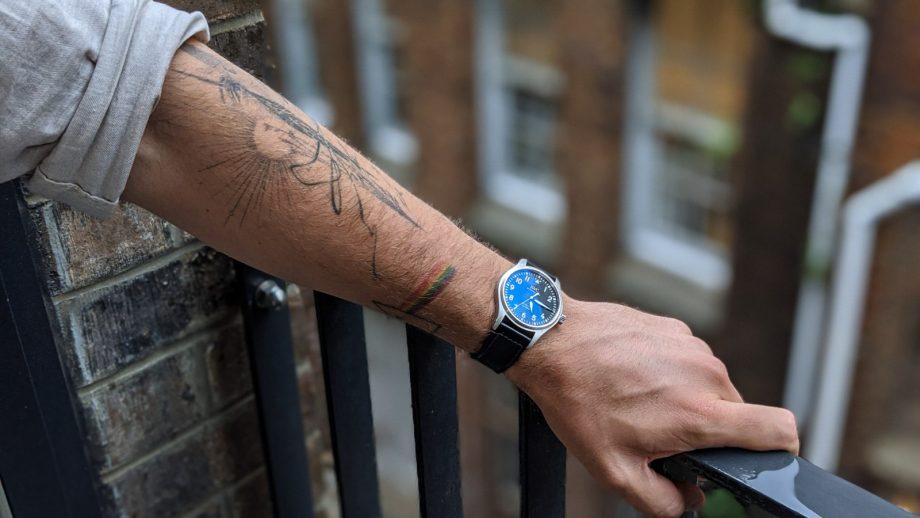 Fast forward some 75 years and we reach the launch of the IWC Pilot’s Watch Mark XVIII (now officially named so) in 2016. As a relative newcomer to the world of horology, I was excited to spend a week with the Mark XVIII to see how it would feel wearing a watch from a high-end manufacturer, not to mention the fact I’ve been an IWC fan for some time, and this was the first time I’d been exposed to one.

The first thing that strikes you when you open the box is just how ‘simple’ and minimal the Mark 18 dial is. You still get the black dial with white numerals and markings that have resonated with the Pilot’s Watch ever since the inaugural model, but place a Mark 17 next to it, and immediately you’ll see IWC has made a number of changes to the design.

Time For A Date 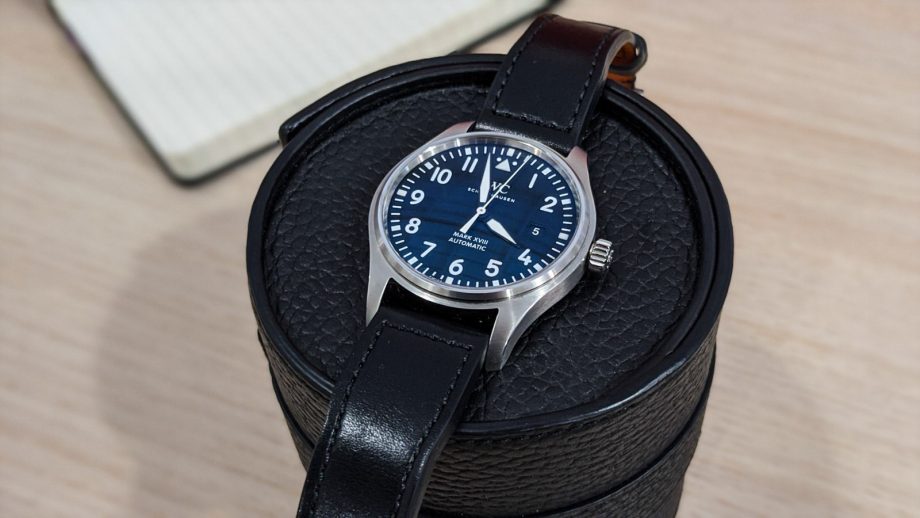 The first obvious difference lies with the date window. Some purists may argue that pilot’s watches shouldn’t have a date window at all. For me personally, I’m a fan. Being able to quickly glance down to see the date is a major help. Of course, with this not being an annual or a perpetual calendar, it requires manual intervention during the months that have 30 days, and February.

IWC has opted for a single date window this time around. If you look at the Mark 17, you’ll see it has a triple date window, with a small red arrow pointing to the correct date. Having only seen images of the Mark 17, I can’t be certain which variation I prefer, but I can say I’m at least intrigued by the triple date, as it’s not a feature I’ve personally come across before.

Sticking To Its Roots

Other subtle changes from the Mark 17 to this variation include a slight change in position for the small triangle with two flanking dots at the 12 o’clock position. This symbol can be found on a number of pilot’s watches, not just those made by IWC, and was implemented so that pilots could quickly and easily decipher where the 12 o’clock position was, both during the day and night. For me, the positioning on the Mark 18 is more beneficial than on its predecessor, as it has allowed IWC to fit in a full seconds sub-dial, a useful feature for many watch-wearers. 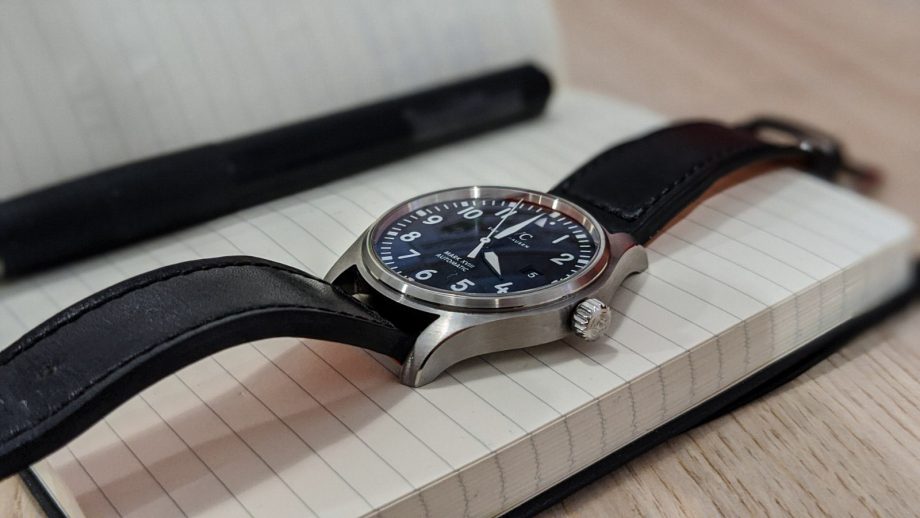 As for sizing, IWC has settled for a 40mm case with this model. That’s a reduction of 1mm from the 17, which itself was up to 41mm from 39mm of the Mark 16. Before putting the Pilot’s Watch on my wrist, I was used to wearing a 38mm Field watch, so the extra couple of millimetres was certainly welcome. I’d like to compare against a 41mm case, but I have no complaints with the 40mm sizing – it was a sweet spot for me.

IWC has attached a Santoni leather strap to the Mark 18. It’s been a little while since I’ve worn a leather strap on a watch, and since having the IWC on my wrist, it’s clear I can be very particular when it comes to leather.

The strap here is seriously well-made, and I love the flash of orange on the underside (not just because it’s my favourite colour, but because I feel it makes the watch a little more playful) but for my personal taste, it was a little stiff (although I imagine this will subside after longer wear) and I wasn’t fully taken with the shinier finish. From my week with it, I’ve settled on the fact I’m more of a soft, matte leather kind of guy. I definitely prefer it over the alligator leather strap on the Mark 17, however. 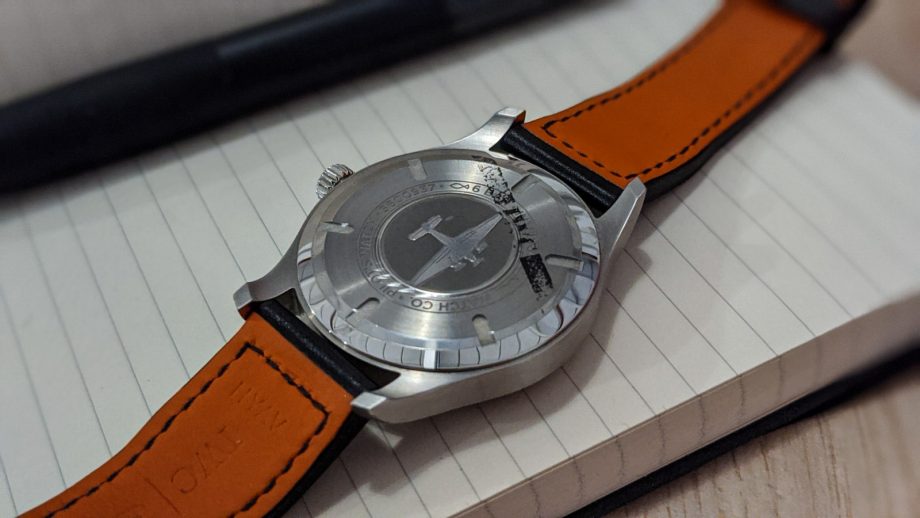 The movement of a watch can be a deal breaker for many watch enthusiasts, with the debate of in-house vs outsourced being as old as time itself. As for which is better can be hard to say, but one thing’s for sure, if a watch’s movement is made in-house, it’s more exclusive and therefore can tug at the heartstrings of the horology aficionados out there.

In the case of the IWC Mark 18, it uses a Caliber 35111 self-winding movement, that’s manufactured by Sellita, but made to IWC’s specifications. The same movement is used by IWC in a number of their other watch families, including the Portofino, Da Vinci and Ingenieur.

It is, however, a different movement to that found in the Mark 17 predecessor, as that model used the Caliber 30110, which is actually an ETA 2892, again, with IWC in-house tweaks.

But while it may not be IWC-made, the movement shouldn’t be disregarded. It has a 42-hour power reserve, and in my week wearing it, I never once had to jump-start it again. Yes, I wore it most days, but there was a good 30 hour period where it sat on my bedside table. When I came back to it, it was still ticking and still accurate. 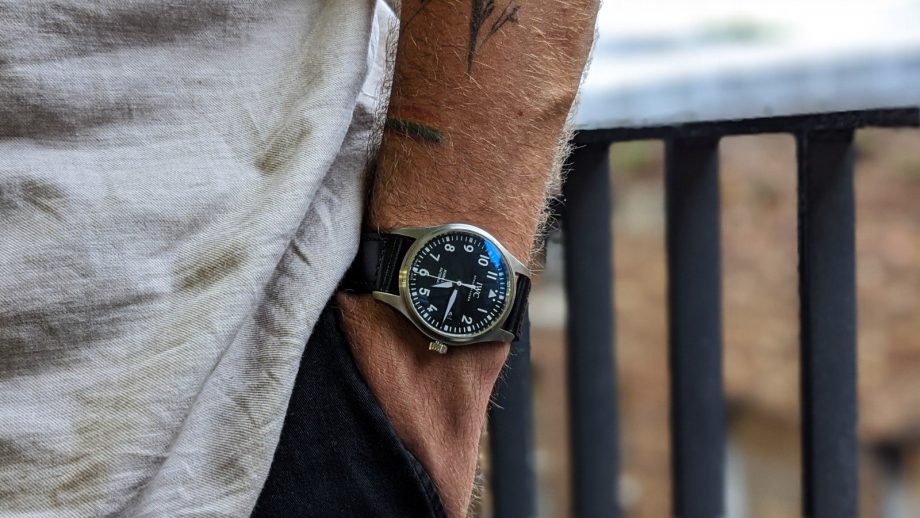 I was sad to see the Mark 18 leave when IWC asked for it back. In my brief time with it, I found it to be the perfect daily wear timepiece. I definitely have a taste for more minimal pieces, even when it comes to other accessories and clothing, so the Mark 18 was the perfect companion for my wrist.

I would definitely put a case for it’s AU$6,550 asking price being affordable. It’s not a great deal for a watch from a company with a history as illustrious as IWC’s, not to mention the level of build quality you’re getting as well.

You’d have to spend a couple of thousand dollars more to get the ‘entry level’ Rolex Oyster Perpetual. But if it’s a pilot’s watch you’re after, you could even consider IWC’s own Spitfire Automatic.

This model was part of IWC’s new Spitfire collection launched in 2019 and comes with an in-house manufactured 32000 movement. It has a very similar dial to the Mark 18, along with a date window and a rather fetching NATO strap, which can in some ways make it more ‘authentic’ and so is well worth your consideration.

What is IWC famous for?

The IWC Schaffhausen is best known for producing top-quality pilot and aviation watches and using titanium in their timepieces. It has been recognized as one of the most recognized Swiss watchmakers in the world.

Do IWC watches hold their value?

Yes. IWC combines technology and luxury in their timepieces, so their products hold their value over time. If properly maintained and care for, IWC watches offer a great resale value.

Do IWC make their own movements?

Yes. Since 2017, IWC has been increasingly replacing third-party movements with in-house calibers, particularly watches in the lower end range. Most of their famous Portugieser collection use in-house movements.