What can this off-roading noob say about venturing into the world’s most daunting testing ground for four wheel drives…here’s a hint: It starts with ‘holy-mother-of’ and ends in ‘it’.

That’s the reaction most civilian drivers will get when they stare down a “road” that’s actually just a cluster of boulders lined in front of them with a shear cliff on one side and a guide convincing you to drive through it for six hours. Thankfully, we were armed with a formidable tool. Enter the  dirty new Jeep Wrangler Rubicon, the car we flew 12,000km to drive through Lake Tahoe’s famed Rubicon Trail.

For those who weren’t aware (me), the Rubicon Trail is basically the Nurburgring of four-wheel-driving. If your 4WD production car can make it through this track without a rock spearing through your undercarriage, it’s worthy of wearing the off-roading badge with honour – a reputation that a many trail-rated Wranglers have worn to date.

1. The current JL Wrangler model took more than a decade to develop and the result is an insanely capable off-roading vehicle in factory standard form 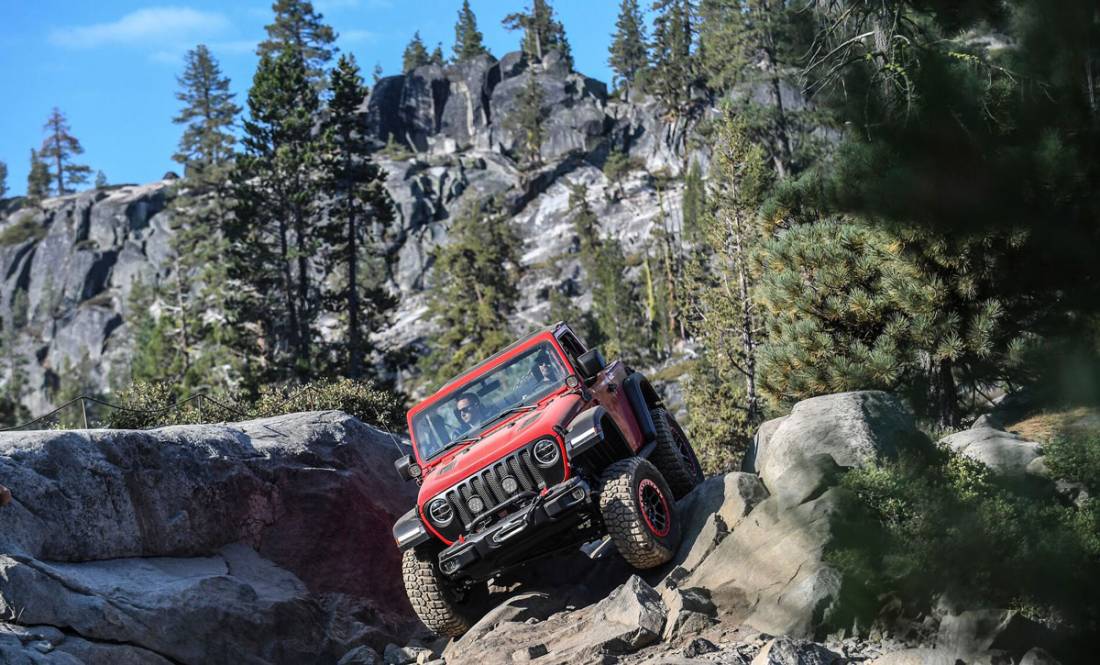 The test vehicles we used on the treacherous +30km Rubicon Trail were all taken from the dealership floor with no modifications or upgrades made. Even the stock tyre pressure was retained at a tarmac-friendly 42psi – serious off-roading vehicles deflate their tyres to attain more traction. As you can tell from our adventure, these new Wranglers didn’t need it. 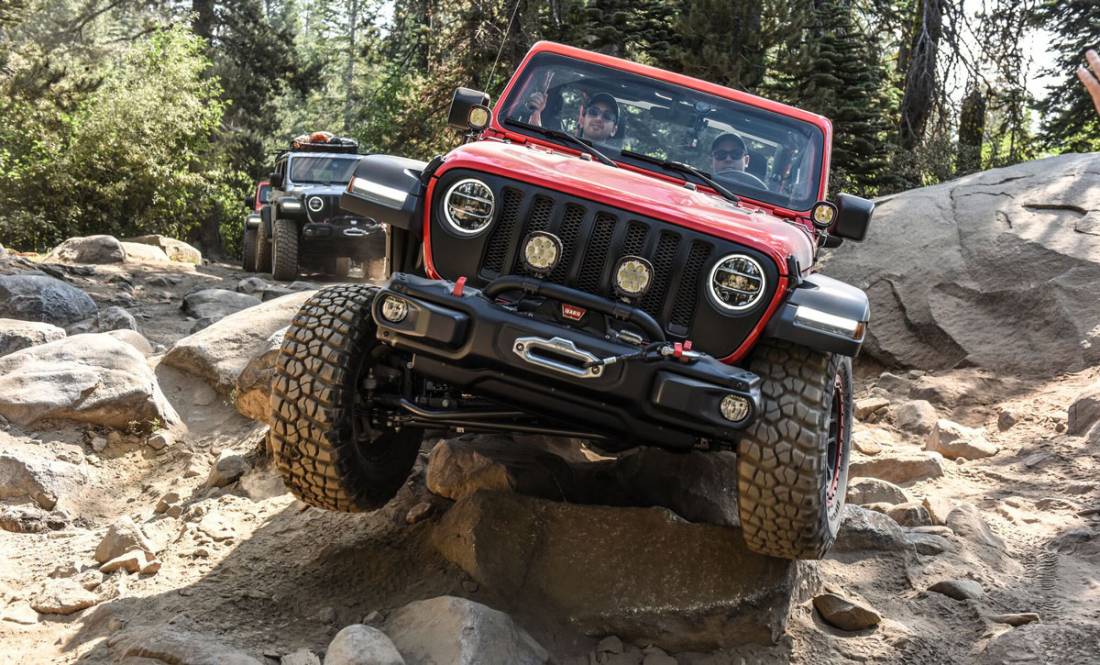 Dropping the car over huge boulders and perilous inclines left us praying that we didn’t put a hole through the transmission or snap a steering column. We didn’t need to worry though since the screeching and knocks sounded way worse than they really were. All of the car’s vitals are protected by steel skid plates which come as standard on the new Wrangler Rubicon. 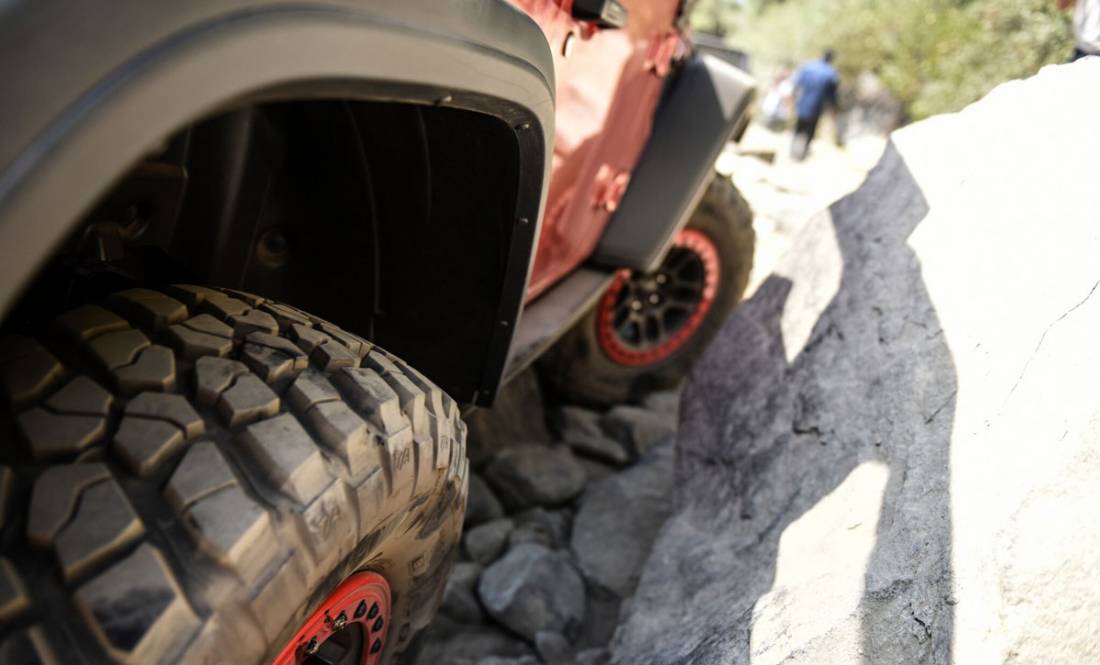 Think of what Jeeps have been designed to do since the 1940s and you’ll soon realise that exotic body work is not an option on these cars. The plastic flares and side mirrors aren’t there for cost cutting purposes, they’re there so that that they can be replaced should they ever get torn off when attempting trails like the Rubicon. 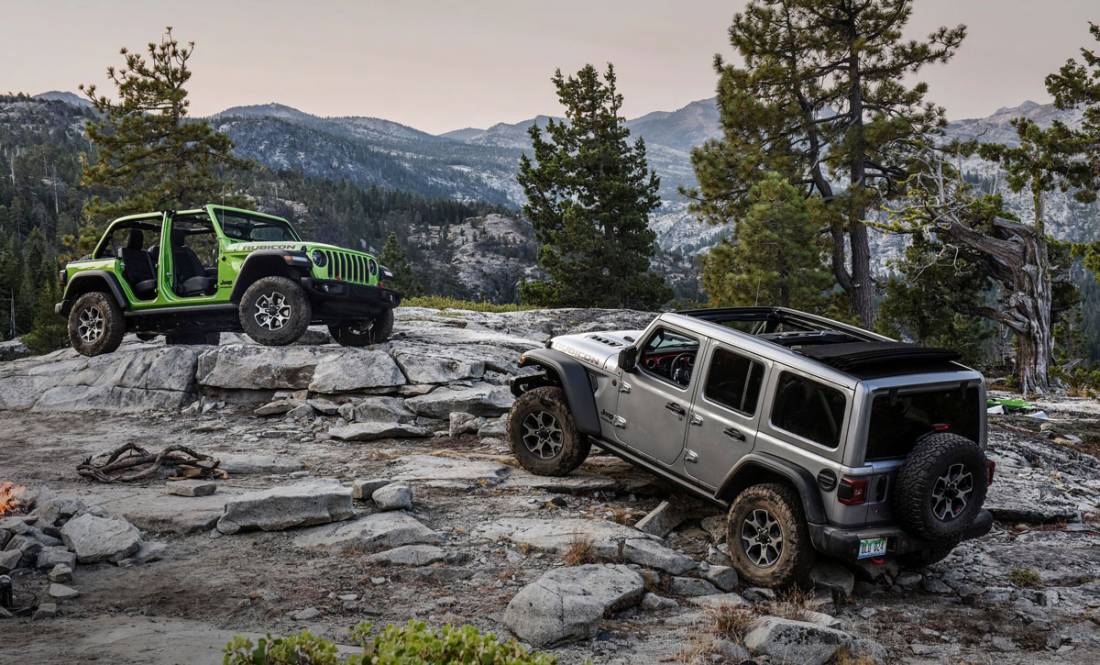 Top down, roof off, front windscreen down, no doors. You customise it and the new Wrangler can do it. It appears that Jeep’s ‘Go anywhere, do anything’ philosophy from WW2 still stands today. The car’s versatility is backed up by better power and fuel figures alongside a lighter aluminium body and improved build quality. It’s they type of car that would make perfect sense for an outdoor person with an unhealthy addiction to French bulldogs.

5. Riding with a smooth entertainer

The Wrangler’s entertainment system was a surprising performer. Smartphone connectivity was a breeze and the sound quality produced by the Alpine speakers made blaring Daryl Braithwaite’s One Summer through the rocky mountains effortless. More importantly the sound quality didn’t wane even with our roof off and exposed rear seat partition. A nice touch is the multiple USB ports which have rubber sealed lids incase water makes it into the cabin.

6. Interior quality is robust and functional rather than premium and flashy

Don’t expect European-spec levels of interior finishing here – the new Wrangler’s interior is purely functional without being ugly. Everything is tactically laid out for the urban commute, rough terrain, space purposes, weatherproofing and driver visibility. Yes, there’s lots of plastic, but it’s not a bad thing in this case. It’s also the first time we’ve ever had to make full use of a passenger glove box handle as the car tossed us around like a dirty salad on the Rubicon Trail.

7. Great seating position and cool climate control made life much easier when taking on the rugged outdoors 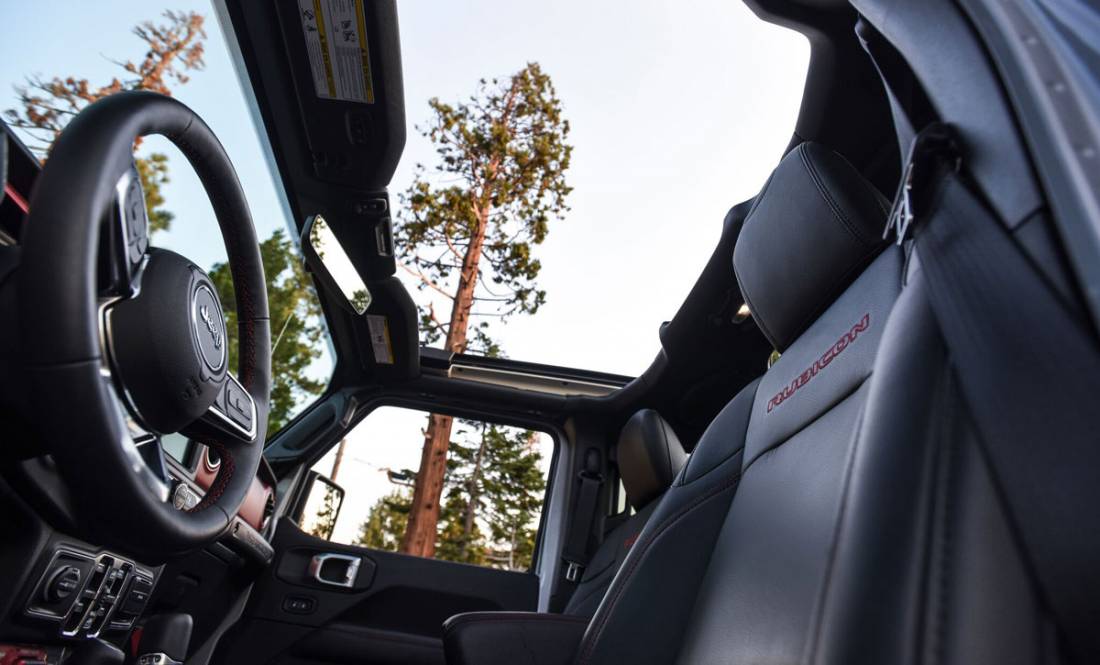 Our Wranglers came with leather seats and climate control. We thought that these features would be better suited in an urban driving environment but were proven wrong when the trail got to temps of 30+ degrees during midday. The nicer seats also helped as we were trekking three hours in and out of our campsite. 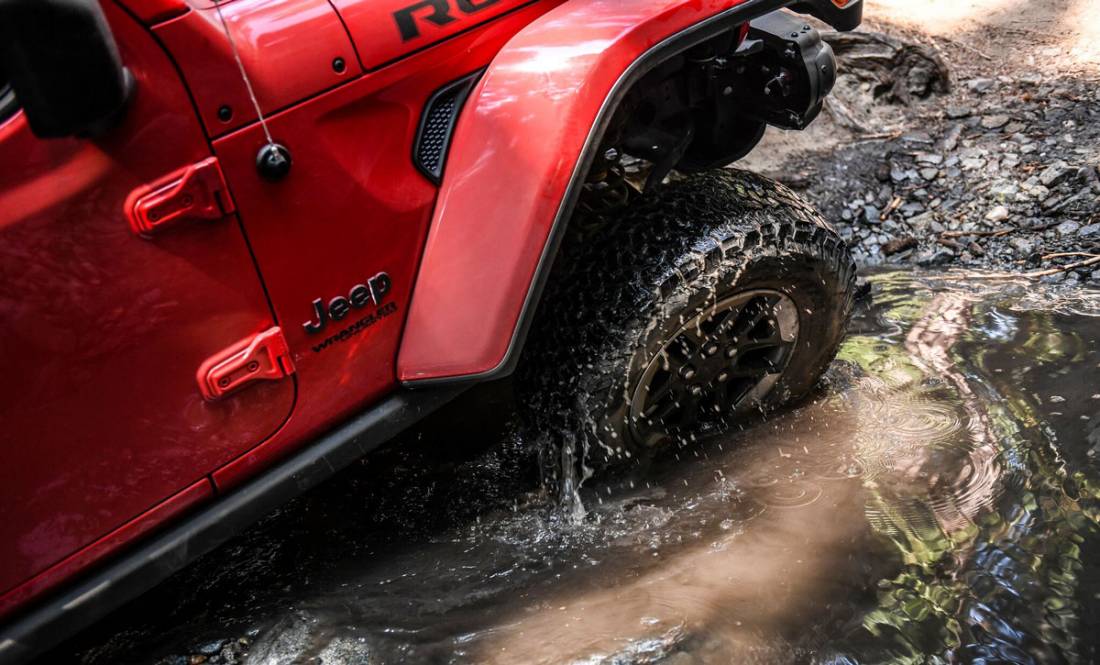 Sure it’s been done to death, but it’s a mandatory test for any car which claims to be a true off-roader. To the dismay of my co-driver, I launched our new Wrangler through a calm river crossing at full speed. He thought the engine would be flooded for sure. It wasn’t and we made it across without drama. Jeep has re-engineered the car with extra ground clearance and wheel articulation to afford a water fording of up to 76cm.

9. Road compliancy was an unexpected surprise 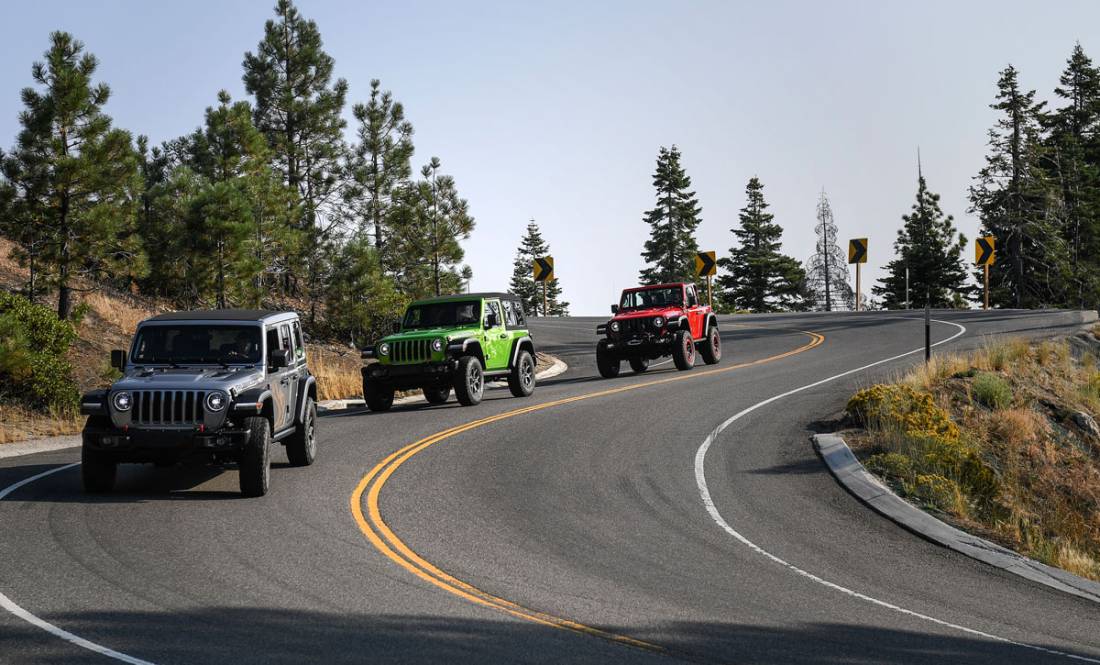 We’re not talking about driving a luxury grand tourer here, but we did expect the new Wrangler to be harsher on-road. It wasn’t. Driving around Lake Tahoe provided acceptable levels of road noise from the chunky 33-inch off-road tyres. They did track a bit on the Rubicon Trail which requires some man-handling to get the car back in line, but that’s expected from such driving conditions. There’s also Auto Emergency Braking built in for peace of mind. 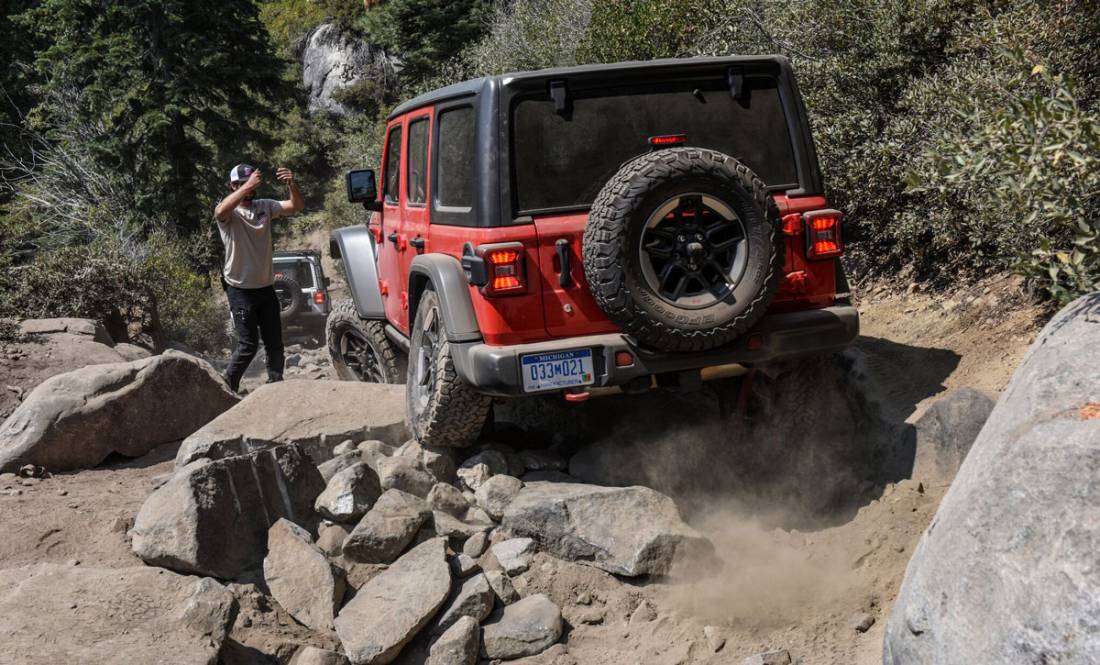 The new car features plenty of historic touches for a quirky-nostalgic appeal – think drop-down windscreen, removable panels for an open-air experience and a spare wheel that we were told will always remain on the rear door. As for new technology? The rear LED tail lights have blind spot sensors built-in.

11. Mopar raised version of the Wrangler Rubicon is a beast 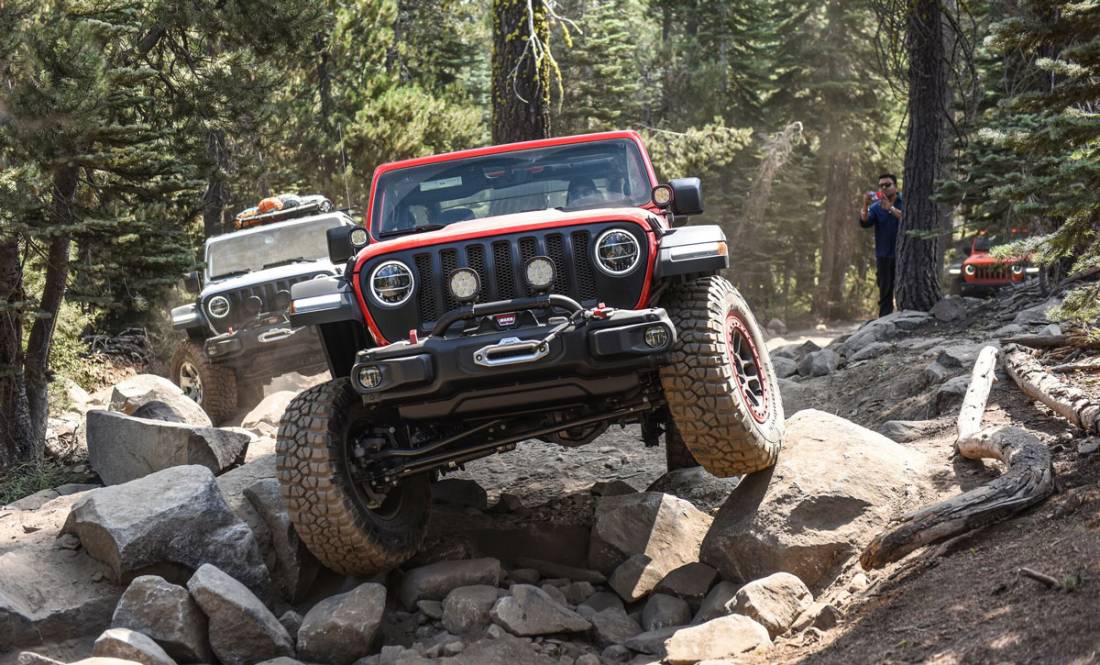 A picture tells a thousand words. We  cleared almost every boulder the size of a plump child with the Mopar kit which saw bigger tyres and raised suspension. Funnily enough, the Jeep designers also managed to improve aerodynamics by 9 percent from the previous model by redesigning the front fascia and slanting that front grille. Is it race ready? Probably not. But it will save you a bit of petrol.

12. It comes in fantastic ‘outdoorsy’ colours 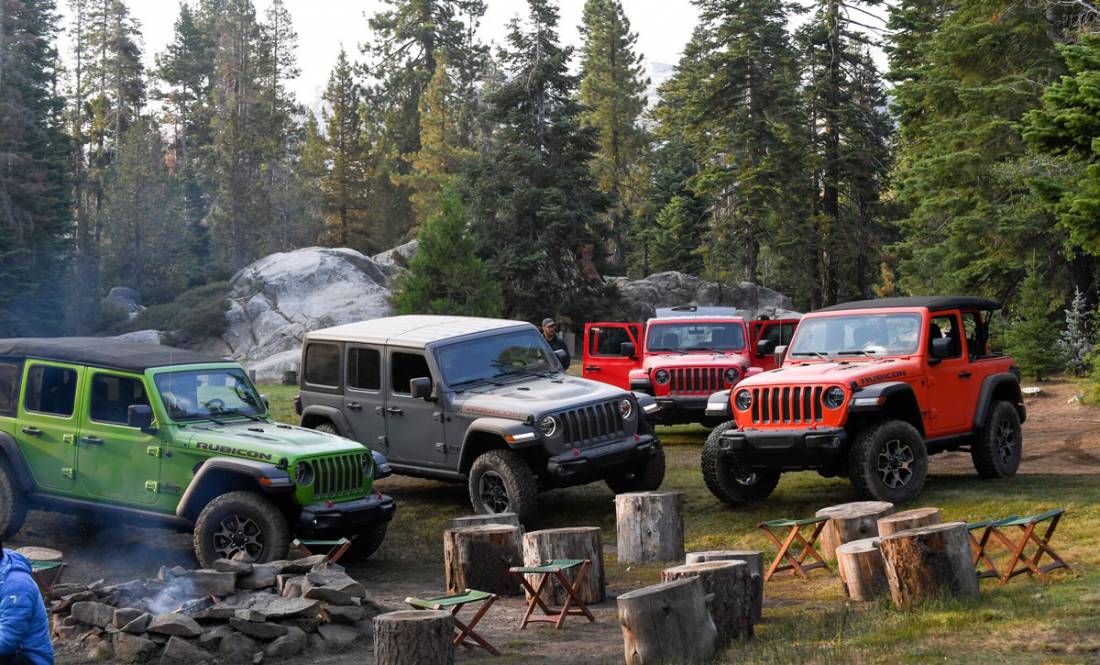 If you’re in a Jeep Wrangler Rubicon, there’s a high chance that you’ll see some leisure hours behind the wheel. The colours available play to this notion with bright greens, oranges and reds accompanying more subdued colours like metallic grey and white. 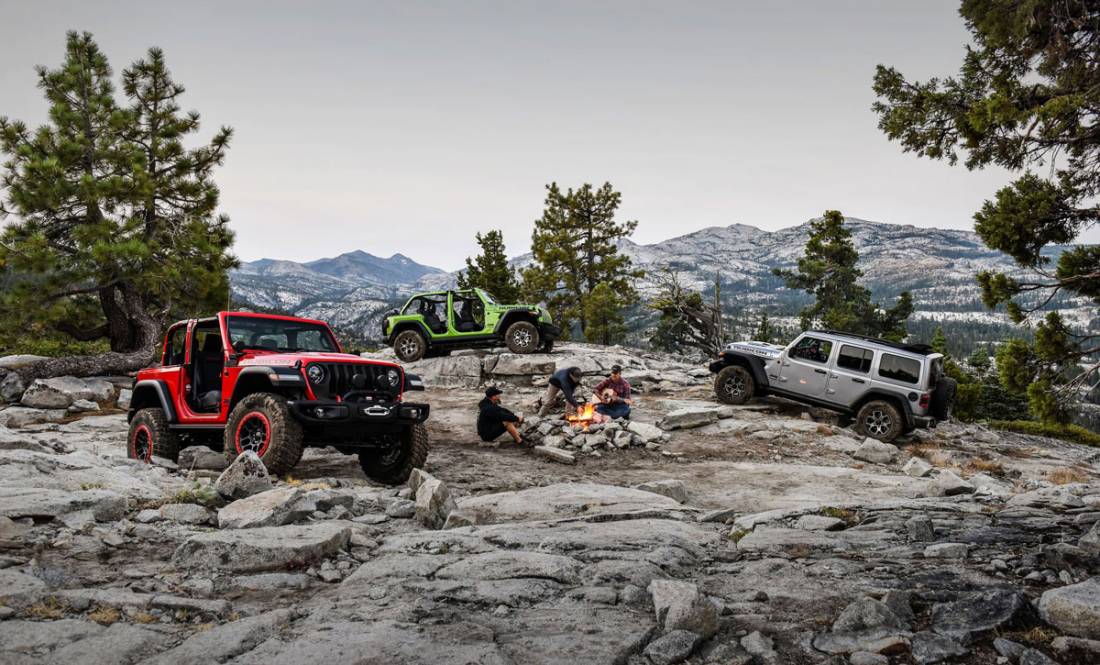 Given that Australia has an off-roading culture that’s similar to that of America’s, the car already earns itself a dedicated market. For those who don’t have membership to the off-roading fraternity, the new Wrangler Rubicon is simply a legendary old dog reimagined for modern times with fresh tricks.

Will all buyers use its off-road capabilities to its full potential? Unlikely. But the same could be said for those who buy supercars and leave them in garages. The Jeep Wrangler Rubicon is about driving a statement as much as it is about traversing treacherous rock faces.

If the you’re the type who enjoys road trips as much as trips to the beach in an iconic cruiser, the new Jeep Wrangler Rubicon is the perfect companion that’s as tactile as it is versatile.