Kevin Hart is walking proof that consistency is key to success.

The 41-year-old comedian has parlayed his signature brand of high-strung, neurotic comedy into a multi-million dollar Hollywood career, becoming one of America’s most popular comics. In recent years he’s also become a producer, a podcast host… And a rather convincing style icon.

From pattern-heavy summer looks to proving that short men can look good in a suit, Hart has a keen eye for style. But there’s one combination the man consistently gravitates back towards, as well as one watch in particular: Hart loves wearing matching casualwear, he loves retro Nike sneakers, and he loves the Audemars Piguet Royal Oak.

Don’t believe us? All you need to do is take a quick look at his Instagram. 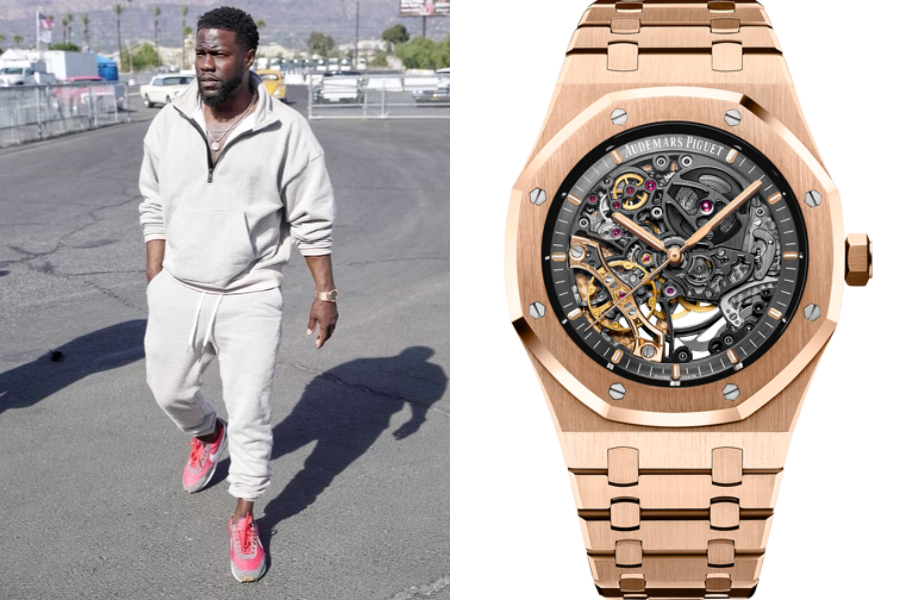 A few hours ago, Hart shared this photo of him looking staunch in an all-grey John Elliott sweatshirt and trackpants combo; pink Nike Daybreak sneakers on his feet; and his much-loved Audemars Piguet Royal Oak Double Balance Wheel Openworked (ref. 15407OR.OO.1220OR.01) on his wrist. It’s a great outfit: the pink sneakers and pink gold watch (which is worth a hefty 260,000 AUD) offsetting his clothes perfectly.

Ironically, just a day before he shared a photo of a virtually identical outfit – if not in colour then in composition. That outfit consisted of a brown hoodie and trackpants; mustard yellow Nike Daybreaks; but this time, his Royal Oak Selfwinding Chronograph (ref. 26331OR.OO.D821CR.01): a slightly less expensive example of the coveted sports watch that’ll only set you back around 70,000 AUD. ‘Only’.

Two similar outfits on subsequent days? If it works, it works, we guess… Must be nice having so many APs, too. 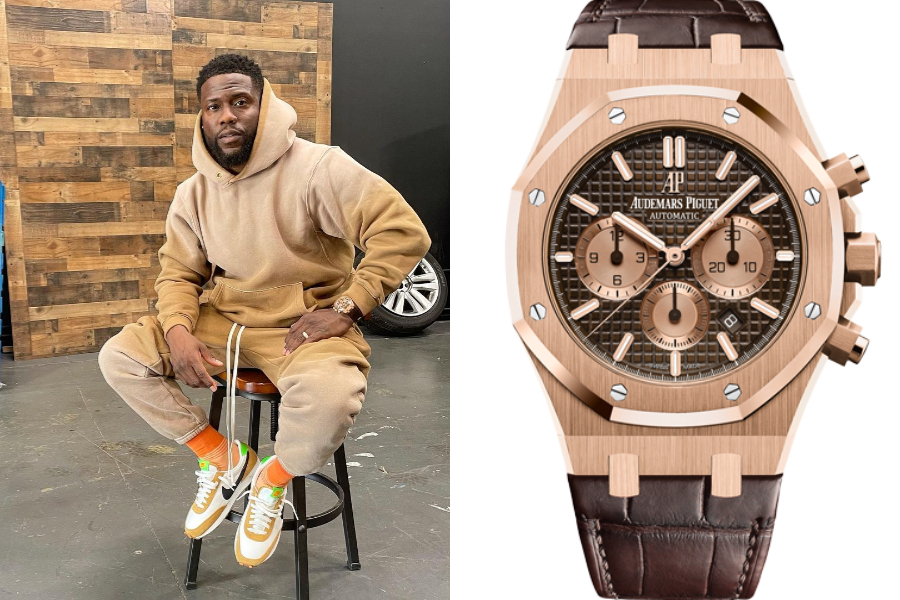 These two outfits are just the tip of the iceberg when it comes to Hart’s love affair with comfy fits, Nike kicks and of course, the AP Royal Oak. He also shared a video of himself this week where he’s wearing a Dior track top, Nike Dunk sneakers and yet another Royal Oak, a stainless steel model on a red rubber strap.

And that’s not all: last year on his 41st birthday the funnyman was spotted wearing a white ceramic Royal Oak Perpetual Calendar (ref. 26579CB.OO.1225CB.01), a white Thom Browne hoodie and a triple-white pair of Sacai x Nike LDV Waffle sneakers. The man’s nothing if not consistent.

In other Kevin Hart news, the multi-disciplinarian has announced that he’s teaming up with director John Hamburg (of Meet the Parents fame) for a new Netflix comedy film titled Me Time. He’s also set to star in the upcoming comedy film The Man From Toronto this year, as well as in the upcoming drama Fatherhood.