In the professional world of sporting dominated by watches from Audemars Piguets, Patek Philippes and Rolexes, Kyle Kuzma has gone and done something controversial — sacrilege even, according to some.

In his most recent visit to Australia Kuzma was spotted rocking Louis Vuitton’s Tambour luxury smartwatch (third image slide below) which made for a very refreshing look on this 24-year-old NBA player for the Los Angeles Lakers.

It certainly goes against the grain of his more senior colleagues like LeBron James who usually opts for $100,000 AP Royal Oaks, Ben Simmons who was recently spotted with a ‘Root Beer’ Rolex and Anthony Davis in his $300,000 Richard Mille stunner.

The Louis Vuitton Vuitton Tambour is a bonafide smartwatch and it was only this year that the second edition was unveiled with flashy new features like a personal travel assistant and black PVD case. You can read more about the full specs here, but for now we just wanted to highlight how surprisingly well the digital watch styles with Kuzma. 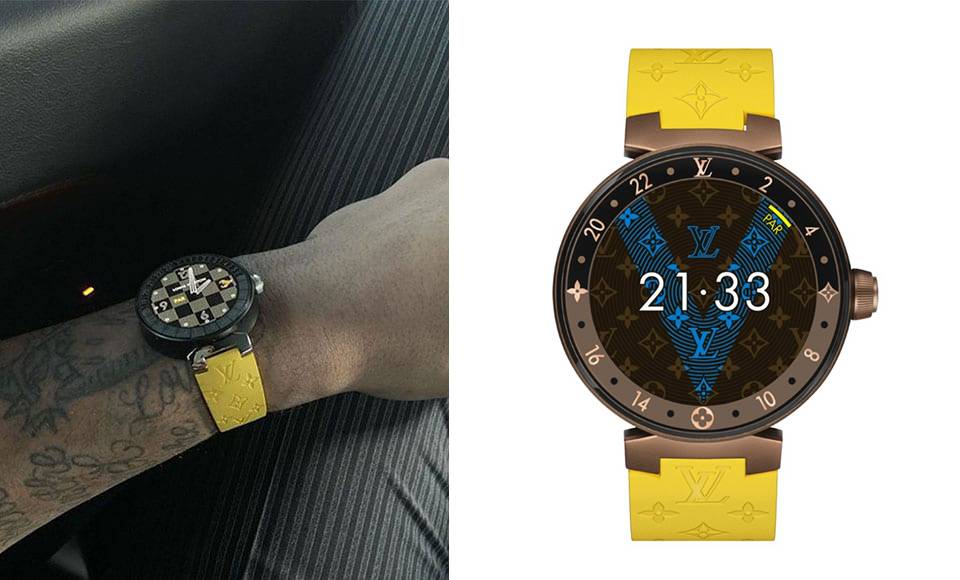 Set in a bright yellow strap, it certainly looks more upmarket than your average Apple Watch but still retains that playful aesthetic. You can take a closer look at Louis Vuitton’s new Tambour Horizon on their site.

The Lakers star paired the watch with black pinstripe trousers, a black t-shirt tucked in and white dad sneakers from Nike for a very cool yet smart look. There was also a double belt loop thing going on which we can’t quite figure but looks the part nonetheless.

If fashion-forward smartwatches are the future of the NBA’s flex game then we’re definitely excited to see what comes next. Until then we’ll happily sit on the sidelines watching the commentary between the purveyors of old and new world timekeeping.