A ‘Madonna’ in his own right, Lenny Kravitz has been reinventing himself since the Eighties.

Of Caribbean Jewish-decent, Manhattan-born Kravitz grew up in LA where he fed on the rock tunes of the Rolling Stones, and the groovier Marvin Gaye and Bob Marley. Becoming a rocker himself, Kravitz won four Grammys, crowning him as one of the most influential rock musicians of the Nineties.

All this to say, Kravitz has a creative streak, which goes beyond the realms of music, and impedes on his personal style. The question on Lenny’s lips is still – after all these years: “Are you gonna go my way?”

Breaking It Down – Lenny Kravitz Style 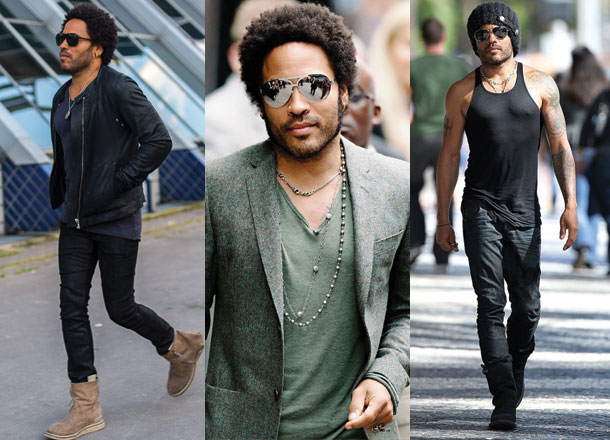 Lenny Kravitz style, like his music, has been on a journey. Earlier on, his Sixties stoner vibe developed into more of a denim-doting rebellion, before a penchant for leather jackets crept on down to his pants -and stayed that way.

Today, Kravitz offers a melange of the past with his different shades of black. And he even embraces tailored pieces (blazers mostly) over rock-ish, streamlined outfits, which are never without a pair of shades and killer boots.

It took Kravitz years of hair frustration (dreadlocks, buzzcuts and afros) before deciding on a shorter-length fro; his easy hair letting him play around with the finer things in life – accessories. And for Kravitz that means rings, chains, bracelets and a signature silver nose ring. 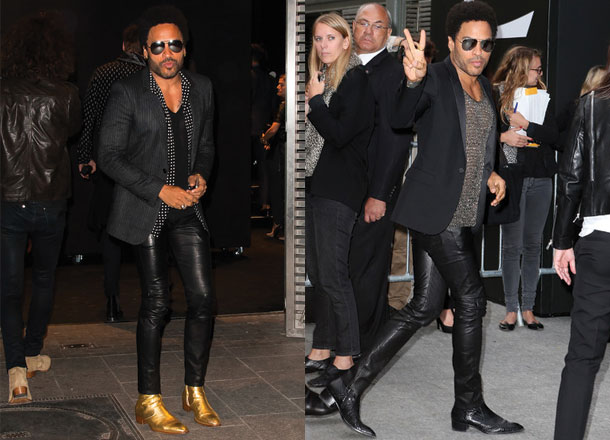 Kravitz’s currently on tour for his new ‘Strut’ album, which is something he likes to do a tad when attending Paris fashion week. Seen here outside the Saint Laurent show, Kravitz reworks glam rock into his lower half, working his signature leather ‘jeans’ and gold metallic Chelsea boots for a glisten-y, molten look.

Kravitz cherishes the pinstripe blazer or one in solid black, opting for a sheeny, satin shawl lapel to match the oil-look of his pants; the latter sat over a scoop neck sweater in cashmere. For a more streamline finish, Kravitz wears a plain tee (always low-cut) layered with an open, collared shirt.

As a rockstar, the most important component is black, which is kept interesting by mixing up the fabric and textures: leather, satin, cotton, suede and wool – all worn in one outfit. 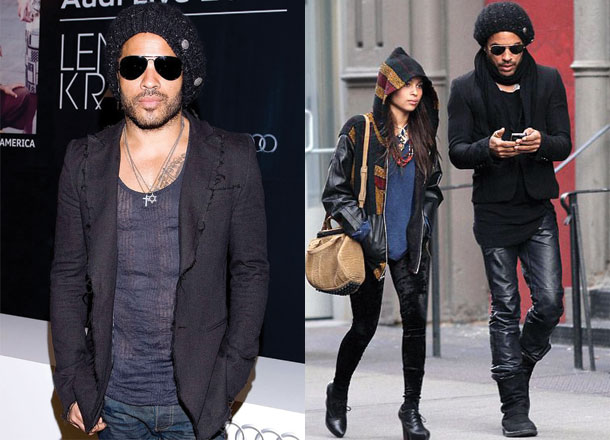 Keeping true to his Caribbean roots, Lenny Kravitz style is blended with a reggae look into his rock-ish repertoire. The key piece here is the slouchy beanie (not to be confused with grandma’s tea cosy). It creates an immediate take-me-to-the-Bahamas vibe, but is modernised by the singer’s leather jeans, suede biker boots and unstructured blazer – all in black.

Aviator shades and lightweight silk scarf rock-up the casual hat, as do Kravitz’s tasteful use of pendant chains. The look is comfort-meets-chic and for Kravitz, works for casual strolls in the street or when attending a down-played music event. 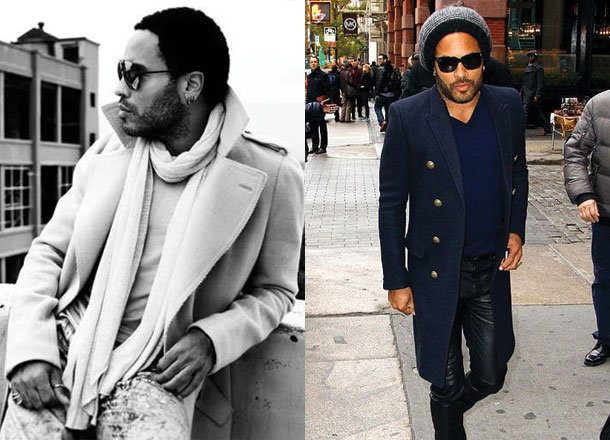 Kravitz is big one basics: black jeans, plain tees (sometimes sheer and longline) and flat-sit sweaters. When winter calls for insulating outerwear, the rocker looks to the military. Kravitz was named after his killed-in-action uncle, Leonard M. Kravitz, which is perhaps why he favours top coats with war-uniform details.

A fan of the double-breasted Chesterfield, Kravitz works a brass-buttoned, navy version over clean, minimal layers – his beanie and shades never far from reach. Firing up the military canon, a camel-coloured pea coat remains on-guard with shoulder lapels and a sweeping, flared collar – popped up under a messily tied scarf to emulate Kravitz’s carefree demeanour. 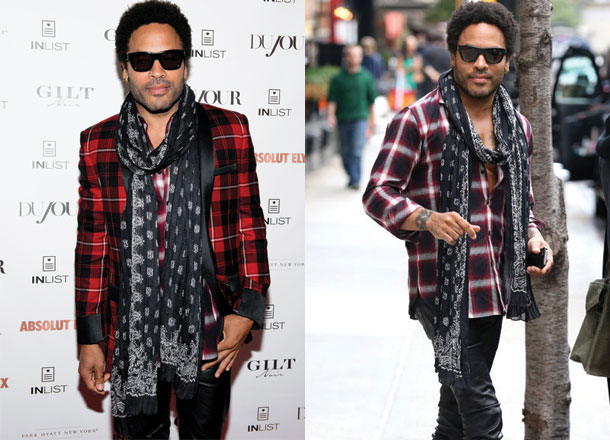 Pretty in plaid doesn’t roll right with Kravitz. Leather and plaid, now that’s more like it. The animal skin jeans return under a loose-fit flannel, unbuttoned at the neck and wayfarers that mask last night’s escapades.

For a chic-er approach to the grungy Nineties print, Lenny Kravitz style focuses towards a more refined tartan blazer with black satin lapels and trimming. Metallic zip details on the leather pants carry on the anarchy from the printed blazer, which is soften by a large paisley print scarf in black and white silk. Shades be staying, day or night. 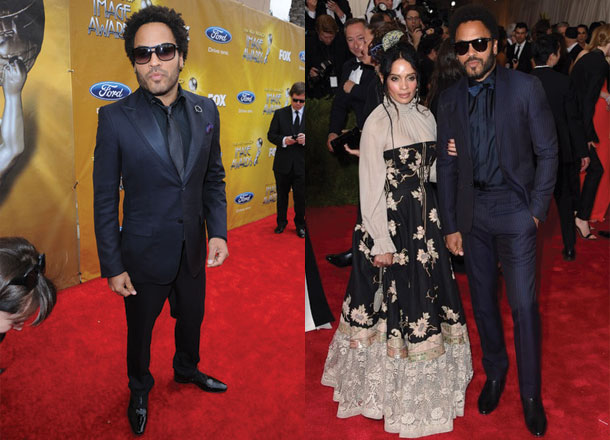 Appearing in films of late (Cinna from Hunger Games?) and the Met Gala in New York, even Kravitz has had to invest in something a little less rock, more dapper for the red carpet. Black is too-stuffy a colour for the more outlandish Kravitz, so his choice of hue is midnight blue.


A subtle pinstripe brings some business-chic to the Met, reading a little dandy-fied with a silk bow tie. Chelsea boots base out the London-look, proving Kravitz never takes sartorial dress codes super seriously – but he always looks good.

Look to Paul Smith for a black blazer with subtle white pinstripes, and Yohji Yamamoto for a silky, cotton sheer blazer that is unstructured and light.

Any basic v-neck tees in black and dark grey including those from lighter cottons from Balenciaga, Sunspel, Astrid Anderson, Alexander Wang and Lanvin.

Aviator sunglasses from Versace, wayfarers from Persol and silver chains from Vivienne Westwood. Rings are from Maison Margiela and silk paisley scarf is from Etro. The Elder Statesman and Thom Browne offer textural, knitted slouch beanies.