How’s hottest to present yourself these days? Sexy but serious? Corporate but fun? The way many curate their LinkedIn profiles, it’s almost as if – beyond having a drop-dead CV, oodles of experience and academic accolades that put a Harvard professor to shame – to get a decent job today you also have to be a part-time model.

Bitter as that last comment was, when you look at this generation of ‘thought leaders’ and ‘entrepreneurs’ a trend soon bubbles; anyone who’s anyone is multi-skilled.

But that, apparently, doesn’t stop some people from trying to use it for a whole ‘nother purpose. Whether it’s because they jumped on LinkedIn with their fingers but their brain was still on Tinder, or because there is a creepy-crawly algorithm in place, many individuals (both men and women) have reported a rather sinister rabbit hole of beautiful faces (rather than relevant jobs, or industry connections) lining their LinkedIn walls. 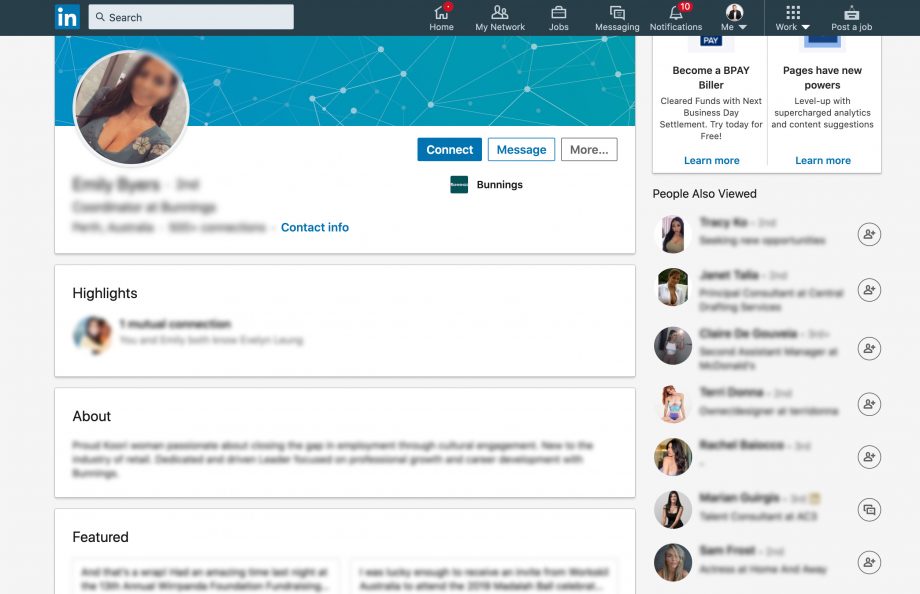 On the other side of the coin, others receive social advances which really should have been instigated over Instagram (or not at all). As the account of one LinkedIn user (below) puts it: “This is not Tinder. I am looking for modelling work. Please don’t message just saying ‘hi’ as it floods my inbox and important things get lost.”

To get to the bottom of this, DMARGE spoke to international tech commentator Geoff Quattromani and Relationship Expert and Advisor to Channel 10’s The Bachelor Samantha Jayne. What’s up with the tech? What psychology is at play? What… the hell? 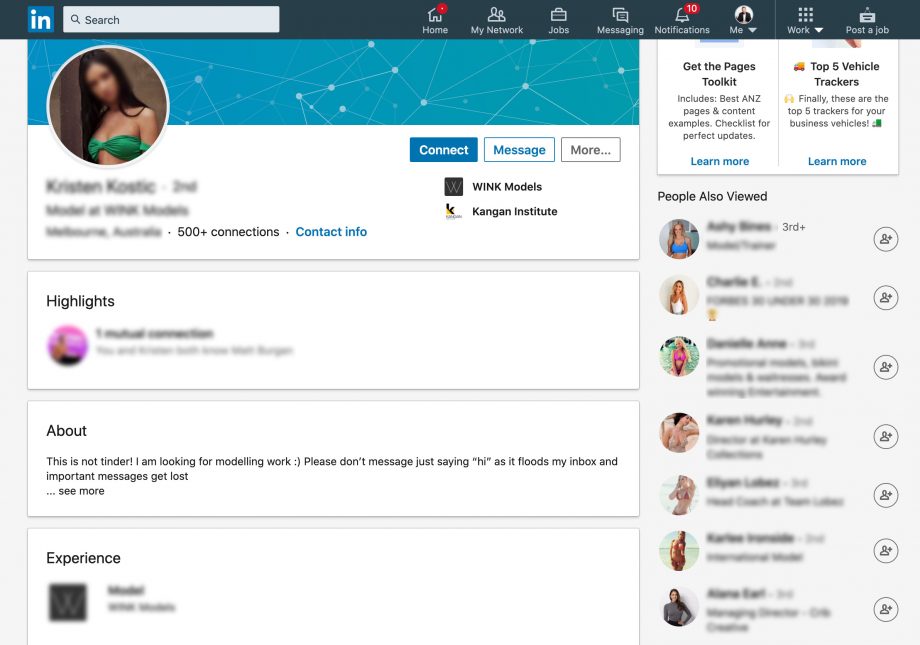 We got in touch with Geoff first to break down the algorithm. This is what he told us: “LinkedIn appears to have built algorithms that not only leverage demographic, experience and common interests for new connections… but also profile pictures.”

“What appears to be happening is each profile picture is being analysed and metadata is placed around it. For example, ‘male, athletic, 21’. They are then using that data as part of their recommendation engine to suggest like-minded AND ‘look-like’ connections.”

“If you were a modelling agency you can see the benefit of this, for example. I’m a little surprised LinkedIn is doing this though, especially when the world is encouraging diversity in organisations and here is an example where their algorithms influence you to remain connected to people you already connect with. That won’t shift the needle in bringing more women into tech, for example.”

We then turned to relationship expert Samantha Jayne to ask: could it be our (collective, obviously) fault? The answer was yes… and no. While Samantha agreed with Geoff that it’s “likely all in the algorithm…  like re-targeting shopping” (in that it “wants to give you what you want” to keep you engaged) she also said there was a human aspect to this technical phenomenon.

“Looks have always been a part of natural selection and… always will.”

“The more [physically] attractive woman has a symmetrical face. [As for a] man; it’s more about his… jawline,” Samantha added.

For anyone now wanting to make the most of their assets, Samantha then gave us some tips on looking simultaneously sexy and professional.

“A professional photo is always best for LinkedIn, show your best face angle, smile, dress as though you are going to work not the beach. Conservative is best or something plain.”

“Good posture is everything: shoulders back with confidence is super sexy.”

Got it? Your network awaits.