Not many tech companies can come close to the fanfare that Apple causes whenever it has new products to announce. Although CEO Tim Cook doesn’t get ladies’ unmentionables thrown at him whenever he takes to the stage, his army of fans sure do get excited by the shiny new products he holds aloft.

And the tech behemoth has done just that: announce some new products, including an updated MacBook Air. Although, given the current COVID-19 outbreak, Tim, unfortunately, couldn’t announce them onstage. Instead, the new laptop was announced online before hitting the online store.

Apple’s skinny laptop has always been popular with fans, and it wasn’t until the company decided to kill off the 12-inch MacBook that it really came into its own as being the laptop to buy if you didn’t need to over-the-top power capabilities of the MacBook Pro.

The previous generation was launched in 2018, so what has Apple done to make this latest model even better? Allow us to explain…

It’s Faster Than Ever

Apple has always prided itself on the speed of its laptops, tablets and phones, and with each new iteration, there will usually come an increase in speed. The new MacBook Air is no different. For the first time, Apple has gifted it with a quad-core processor in the form of Intel’s 10th generation 1.2GHz quad-core Core i7 with Turbo Boost speeds up to 3.8GHz (this option needs to be added as an extra). The default options are either a 1.1GHz dual-core Intel Core i3 with Turbo Boost up to 3.2GHz, or a 1.1GHz quad-core Intel Core i5 with Turbo up to 3.5GHz.

Typing Will Be More Enjoyable

In yet another case of trickle-down technology, the new Air also receives Apple’s all-new Magic Keyboard, that debuted on the 16-inch MacBook Pro. Apple claims the new ‘board has just 1mm of key travel thanks to a newly designed scissor mechanism, and an inverted ‘T’ arrangement for the arrow keys makes them easier to find without looking. It’s the little things, right?

Apple consistently strives to be as eco-friendly as possible, and as such, the latest Air’s unibody is made from 100 per cent recycled aluminium, which you can have in one of three colours: gold, silver and space grey. 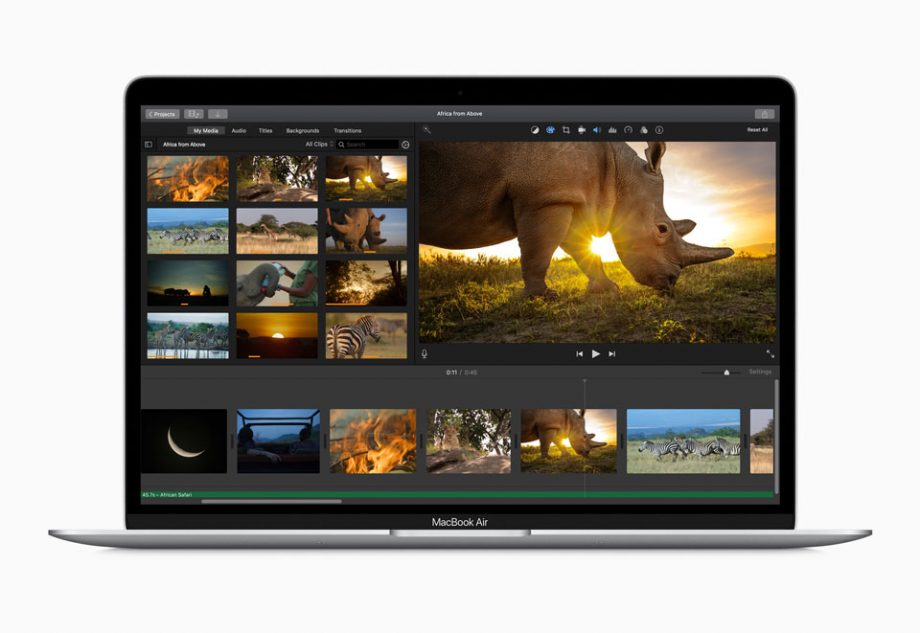 Storage can always be a dealbreaker for many when buying a new laptop, so you’ll be pleased to know that Apple has upped the base-level storage from 128GB to 256GB. And if you feel like you need, even more, you can now spec it with a gargantuan 2TB of space.

It Has Other Pro-Level Features

Thanks to the increase in performance and storage, you could well decide that the Air is more than capable for your production needs. But add on support for an external 6K display (a first for the Air), a number of Thunderbolt 3 ports to fast charging and data transfer and crystal-clear stereo speakers, and it could well be all the laptop you need.

It’s More Affordable Than Ever…

It would be logical for you to assume that given the boost in performance, and the Apple logo on the top, that the Californian company would charge top dollar for the latest Air, but in fact, the price has been reduced. The entry-level MacBook Air now starts at $1,599, $250 cheaper than the previous generation.

You can now order the new MacBook Air direct from Apple’s online store. The press release states it’s due to hit physical stores next week commencing 23rd March, but all Apple stores are closed until further notice due to the Covid-19 virus pandemic. We’re sure you’ll be able to snap one up directly as soon as they reopen.