The ‘Sub’ saw its case size bumped up to 41mm and a bunch of new colour/metal combinations. The black dial/green bezel model in Oystersteel has already been dubbed the ‘Kermit’, and the blue dial/blue bezel in two-tone steel and yellow gold puts even the particularly unsubtle Yacht-Master to shame in the glitz and glamour department.

However, the most exciting model in our opinion was the black dial/blue bezel in white gold, which fans are calling the ‘Cookie Monster’ (yes, Rolex nicknames are weird). Hollywood superstar Mark Wahlberg happens to agree with us apparently, spotted over the weekend sporting this latest and greatest Rolex on his wrist in Los Angeles. 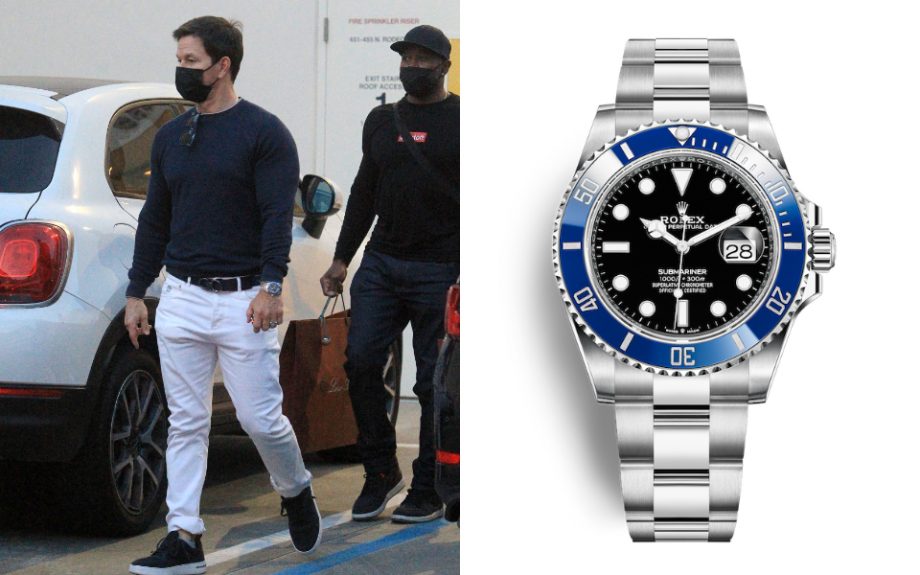 White gold is brighter and more lustrous than stainless steel like Rolex’s proprietary Oystersteel, but weighs a lot more. That’s not a problem for a veritable Superman like Wahlberg, who could probably carry a whole gold bar hanging off his wrist with ease.

He clearly has connections, because getting your hands on any Sub – let alone a new, highly desirable model – is no mean feat. While the Cookie Monster (ref. 126619LB) retails for a tad under 56,000 AUD (~40,900 USD, although US retail prices are slightly lower than Australian retail prices), you’d need to be pretty good friends with your Rolex AD to secure one… Or pay a hefty premium on the aftermarket. For example, Cookie Monsters on Chrono24 are currently selling for around 75,000 AUD.

We suspect the former is more likely than the latter. Wahlberg, a noted watch collector, has quite a few ‘Rollies’ in his collection: multiple Daytonas, including an iced-out ‘Playtona’, a classic ‘Panda’, and this ‘wavy’ white gold model; multiple Day-Dates; a yellow gold Yacht-Master II and another yellow gold Submariner just to name a few.

Wahlberg is working on two films set to release next year. First up, he’ll be starring in Infinite, a sci-fi action film adapted from D. Eric Maikranz’s 2009 novel The Reincarnationist Papers. He’s also appearing in Uncharted, a filmic prequel to the video game series of the same name, which will serve as an origin story for its protagonist Nathan Drake, who’s being played by Spider-Man lead Tom Holland.