You may or may not be aware that the military (or army, whatever you want to call it) has been the source for many of the fashion and style choices we continue to make today. There’s the obvious one of khaki green and the variations in colour that come with it, through to specific items of clothing such as the trench coat, to pattern styles such as camouflage. The military can also be credited with several men’s military haircuts that continue to be popular, decades after they were first seen in the barracks and trenches.

Traditionally incredibly short, military haircuts – such as the buzz cut, ‘Mighty Fine’, crew cut, high and tight or a ‘number zero’, could present a brand new look for you, and while any of these military haircuts might be a little daring compared to what you’re used to, especially if you don’t tend to rock short hair, choosing one next time you visit the barber could be the best decision you ever made.

Why Are Military Haircuts Short?

We’ve likely all seen images of army recruits shaving their hair down to the skin, but have you ever known why that is? The practice of shaving the hair down to the shortest possible length without using a razor is most commonly associated with the United States, and is said to be because for both physical and psychological reasons.

It’s claimed shaving the head was to help prevent the chance of army recruits catching diseases (such as head lice) and it also meant opposing soldiers couldn’t grab the hair and hold them back while they took their life.

Making all army recruits look the same was also said to help instil more of a team mentality, and to remove individual personalities of the soldiers. Perhaps it’s ironic that today military haircuts for men are used to help promote a sense of individuality.

So, what military haircuts for men are there and which ones are best suited to your personal style and face shape. Check out this following list of the best military hairstyles around, and if you’re in search of other hairstyle inspiration, check out our complete range of guides for various men’s hairstyles. 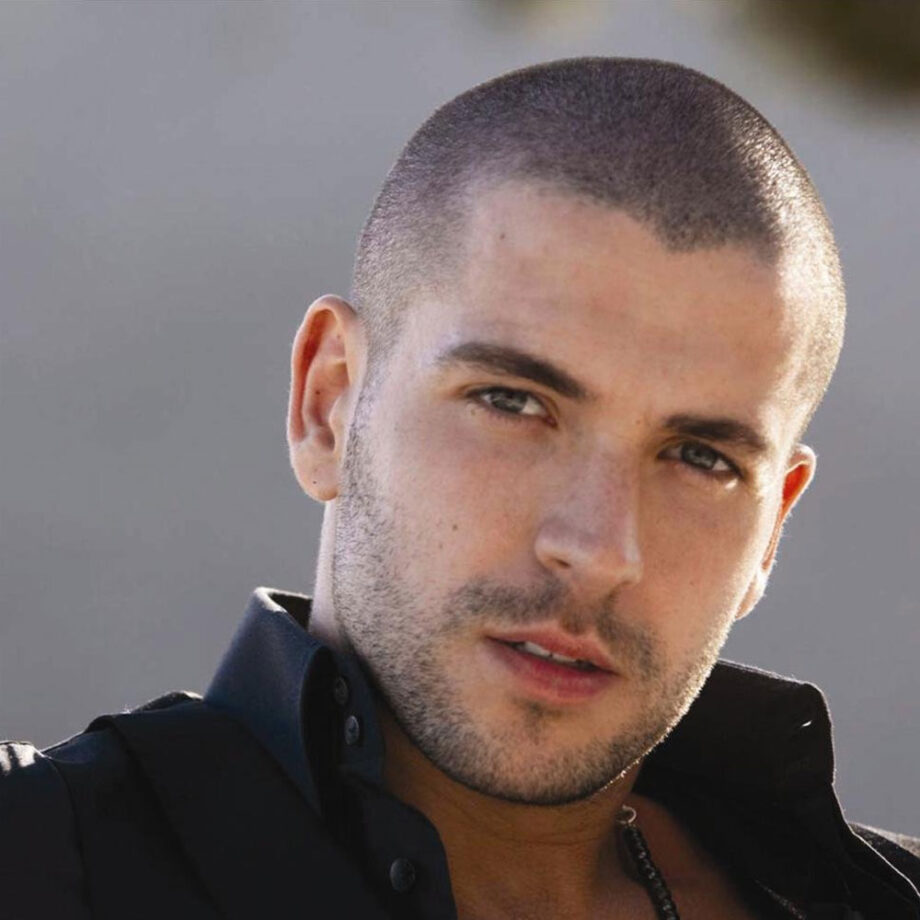 The military haircut that started it all off. Also known as the induction cut, the buzz cut is, as we mentioned before, the shortest possible haircut a man can get without using a razor to remove the last bit of stubble. Often given to new recruits within hours of them joining the army (quite literally upon induction), the buzz cut (which technically refers to hair that is cut to the same length all over using clippers) is the perfect choice for men who want a low maintenance style.

Best suited to men who have square or more oval-shaped heads (and especially those with a killer set of cheekbones) the induction cut is a thoroughly masculine look. 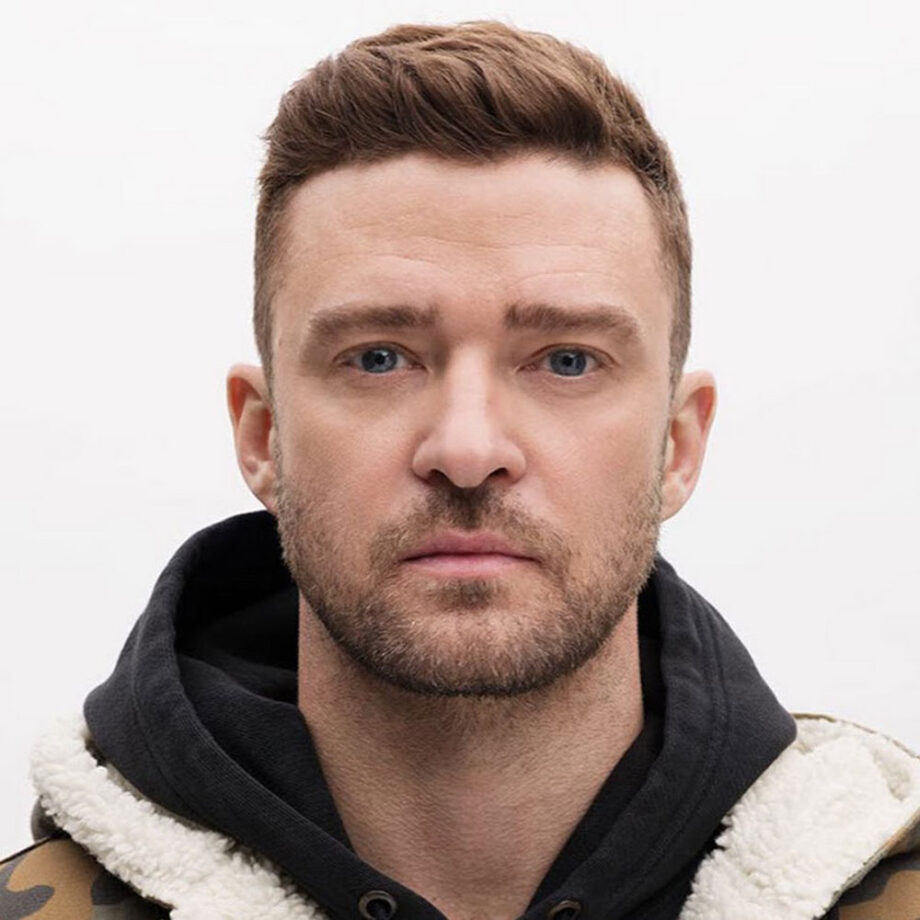 The crew cut is most-definitely inspired by the military, and was even seen atop the heads of soldiers during World War II – then referred to as a G.I. haircut. If you already sport short hair, the crew cut is a perfect hairstyle you need to try out. Coming under the term of buzz cut, by definition, a crew cut sees you sporting shot hair on top of the head, however it graduates in length from the front at the fringe to the crown at the back.

The slightly longer hair at the front can then be styled into a quiff or short pompadour, for example. Best suited to men with thick hair – although men with thin hair can still attempt it – the crew cut is a failsafe option for men everywhere.

The sides and back of the hair can be styled in any way you see fit. The most foolproof option is to leave the hair one length all the way around (but shorter than the hair on top), although it’s possible to add a fade, side a high fade, into the mix, for a more updated and low maintenance look. 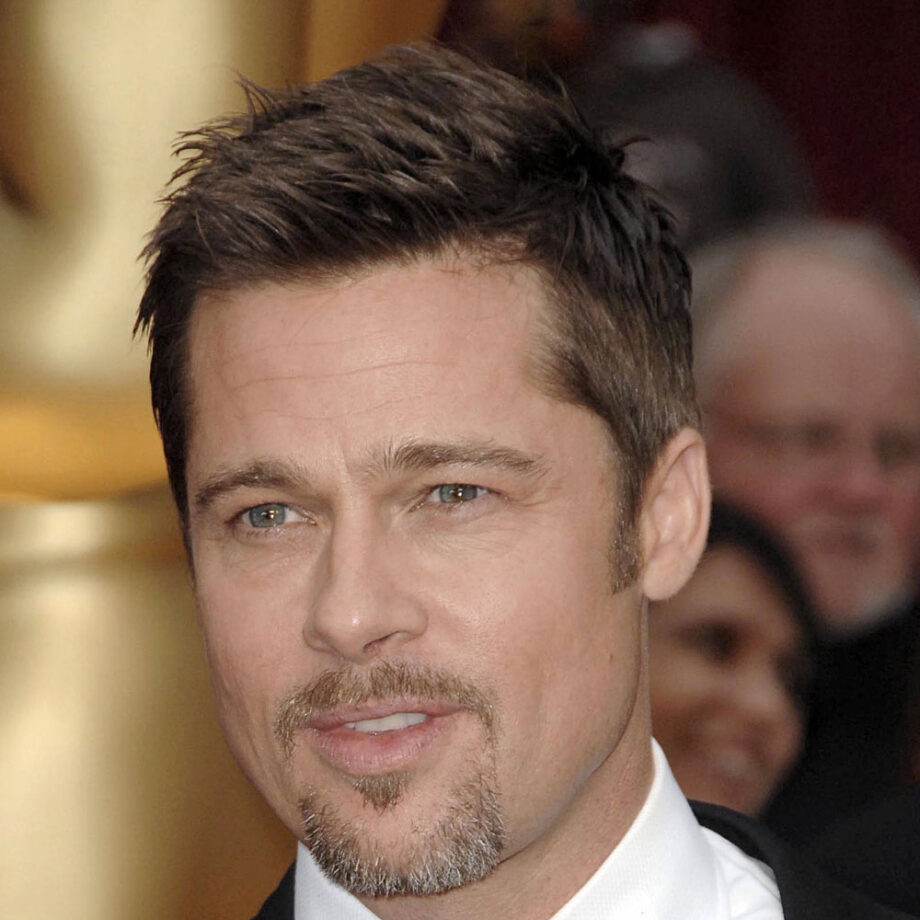 There is great deal of crossover between the Ivy League haircut and a crew cut – with some claiming the crew cut is actually called the Ivy League in the US – although there is less of a precedence for short sides and back compared to that seen on the crew cut. A simple-to-achieve military haircut, the Ivy League name was coined due to the haircut being popular with men who attended the Ivy League universities, such as Yale, Harvard and Columbia, making it an incredibly preppy style of haircut.

Similar to the crew cut, the Ivy League does see a difference in length between the hair on top compared to the sides, with it then being possible for some extra styling. A great military haircut for men with rectangle and square faces, the Ivy League is a clean, sharp and sophisticated men’s haircut. 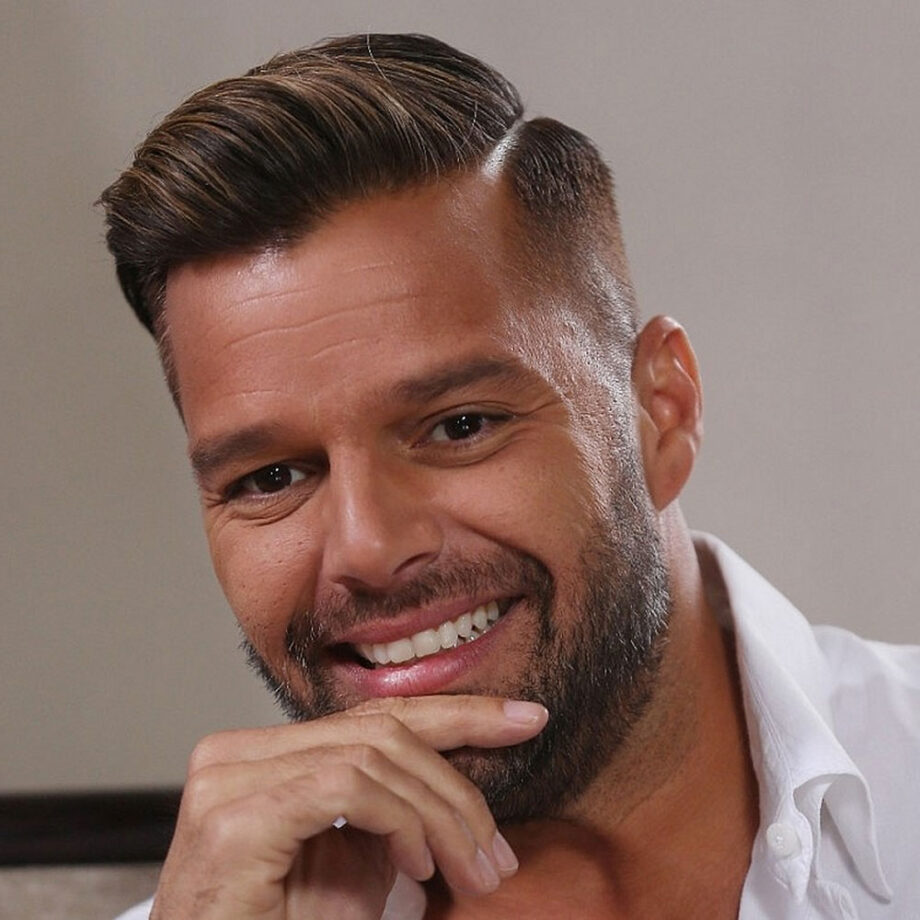 One of the most popular men’s hairstyles ever is the fade. The fade haircut has in itself a multitude of variations  relating to both the hair on the sides of the head and the point at which it begins fading, to the length of hair on top of the head – such as a high fade or even a high and tight.

In order to get close to military haircut specification, men should opt for fade haircuts with incredibly short hair on the sides and back – a number 0/1 up to a number 2/3 – and keep the hair on top of the head as short as possible, while still allowing some length for styling. A fade haircut can be combined with a crew cut, Ivy League or even a buzz cut – which would make it a skin fade – to create a head-turning look that creams individuality. 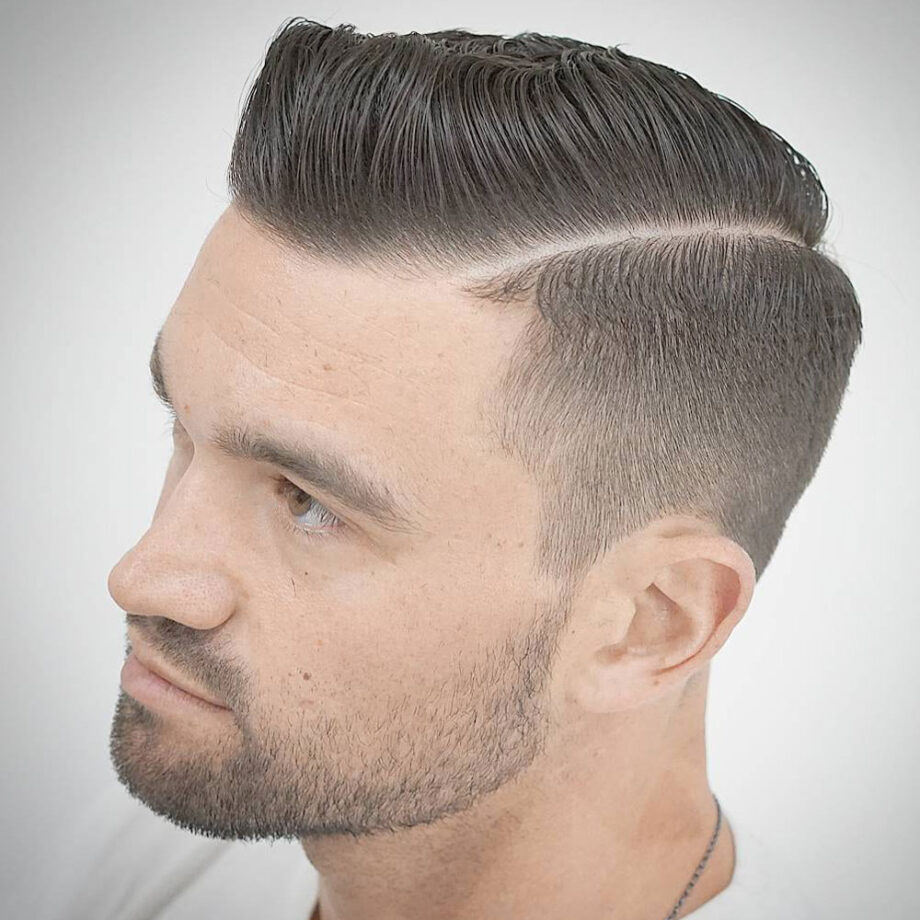 Ok, so we know we said military haircuts are traditionally cut short, but if you’re someone who enjoys a little bit of length atop their head, the regulation cut is the perfect option. Still with its roots in the army, the regulation cut is another that’s similar to the crew cut, but allows you to play around with the length of the hair on the sides.

Traditionally tapered down to a shorter length as it approaches the ears, you’re welcome to show some skin, or leave it covered up with something like a number 3, graduating up to a 4 or 5.

As for styling, because of the slightly extra length on top, you should be able to attempt a quiff, short pompadour or even something like a side-part or undercut, if you cut the hair on the sides and back to a much shorter length. 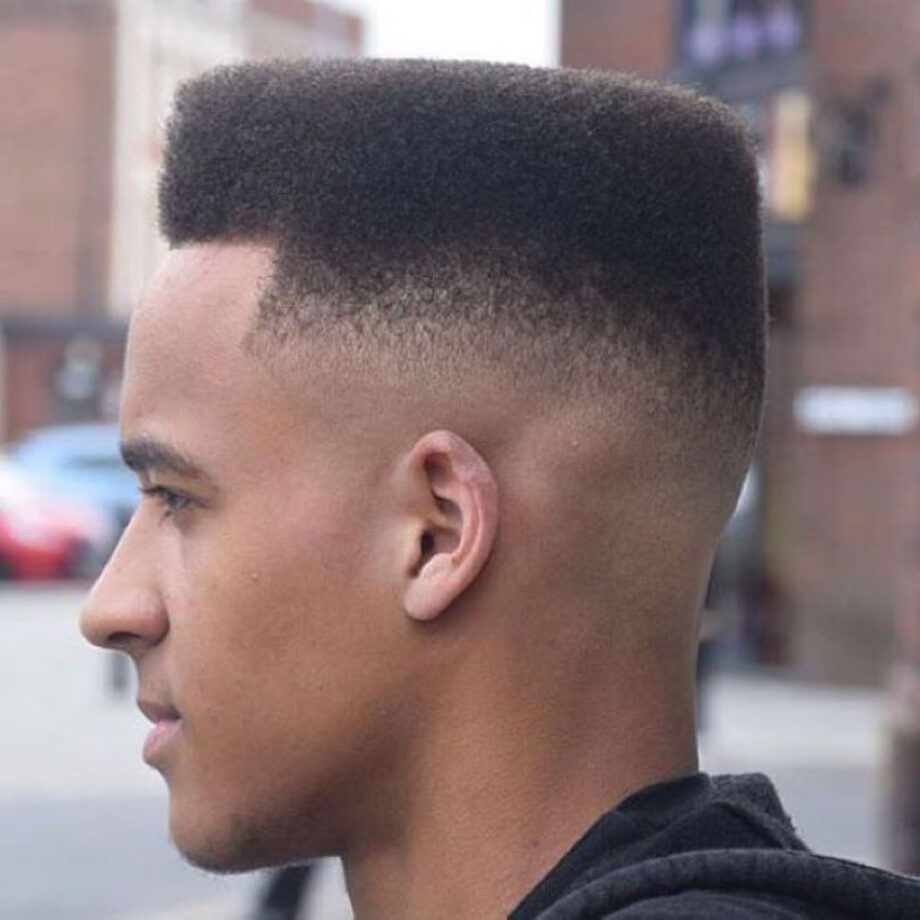 Think flat top and you’ll likely think of Dolph Lundgren in Rocky IV or Jamaican singer Grace Jones, but it is also very much a military style haircut for men. To achieve a flat top, the hair needs to be cut relatively short, and to a uniform length, so that it stands upright on its own accord, so that it hairline is quite literally flat along the top. The hair on the sides and back of the head can be cut to varying lengths – such as one length all round, or they can be faded – which will cause different styles of look when viewed from the front.

If you think the flat top is for you – it works particularly well for those with afro hair – and you want to rock it for some time, you will need to visit the barber on a regular basis to keep everything trimmed to exact proportions, and you can choose to use some styling product such as a high-shine wax to keep it under control. 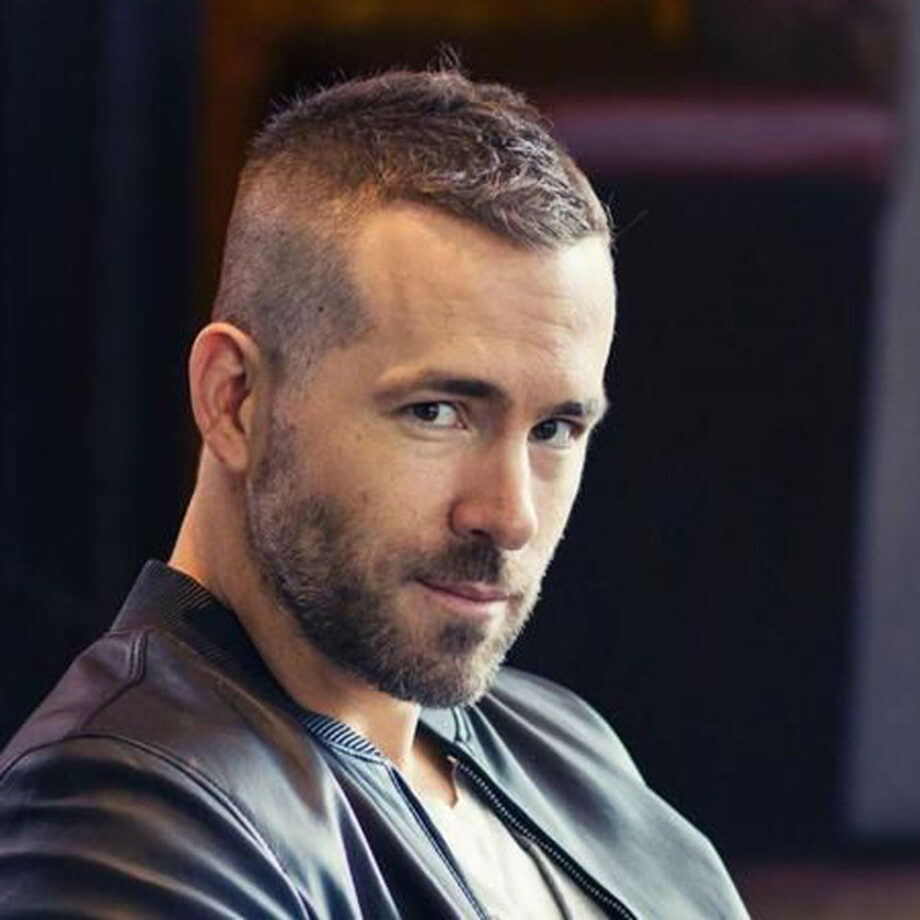 The high and tight haircut combines the best of the buzz cut, with elements of the fade haircut, to create a incredibly modern haircut that can totally transform your look. In order for your hair to be classified as high and tight, it need to be cut incredibly short on the back and sides, with no fading or tapering. Instead, it needs to be cut short up the entire side of the head to the point where it meets the hair on top of the head.

From here, the hair on top should also be cut short, but left slightly longer than the hair on the sides. Because the high and tight haircut will inevitably put more attention on your whole face, you need to consider your face shape before you visit your barber. The high and tight works best on men with square, triangular or oval-shaped faces, and if you’re able to pull it off, makes for an incredibly military haircut. 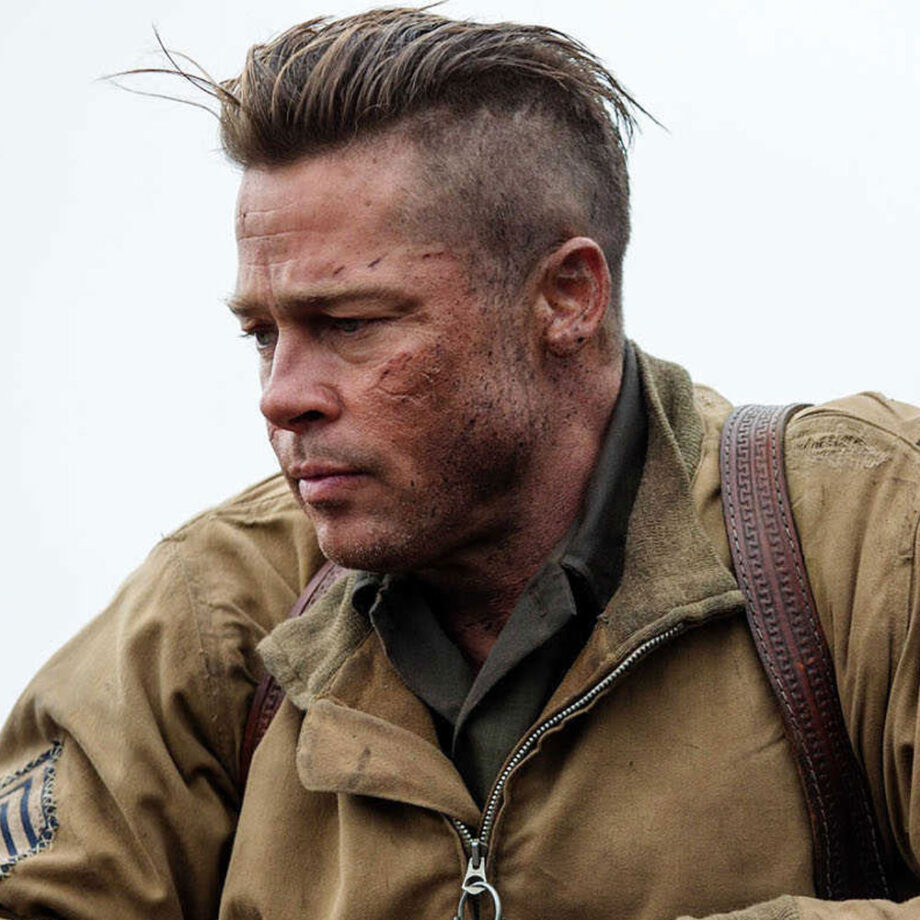 The best example of the hard undercut in the military can be seen in Fury, starring Brad Pitt. While this military haircut does, in some way, go against the ‘rules’ of an army haircut, exhibiting long hair on top, it’s still one that evokes images of the military and of masculinity.

It offers up plenty of opportunity for styling, with the most obvious being the pompadour-style look that sees the hair styled up and then slicked back towards the back of the head. The sides, meanwhile, can be cut to a single short length, faded or tapered, depending on your personal preference.