The TAG Heuer Monaco is one of the most iconic (and revolutionary) watches of all time.

Not only was the Monaco the first automatic chronograph ever made, it was also the first square chronograph ever: its boxy design an instant classic when it was first introduced in 1969. Of course, it’s also known as the quintessential motorsports watch, famously worn by Steve McQueen in the classic 1971 film Le Mans.

The iconic watch has been discontinued and revived multiple times over the years, and remains one of TAG Heuer’s most definitive models. 2020 marks both the 160th anniversary of the brand as well as the 50th anniversary of the watch – so of course, TAG’s announced two new 39mm Monaco models, which might just be the best yet.

One features a bold black dial with a sunray-brushed appearance, whereas the other features a lustrous blue sunray-brushed dial with a red, white and blue colour scheme reminiscent of the original Monaco timepieces of 1969. Both colours are paired with a stylish new metal bracelet – an important feature, as it has been nearly two decades since a new Monaco was presented on a metal bracelet. This particular example draws on the H-shaped bracelet that was used for Monaco watches in the early 1970s. The model with the black dial is also available with a black leather strap.

Both models feature the powerful Calibre Heuer 02 movement, which has also made its way into 2020’s Carrera releases. Visible behind the watch’s sapphire crystal caseback and boasts an impressive power reserve of 80 hours, it’s a refined modern movement that gives the Monaco technological heft to match its masculine design.

The black dial Monaco – with either a steel bracelet or leather strap – is available right now, and the blue dial will be available in January next year. So do you get a black one for yourself as a Christmas present, or do you treat yourself in 2021 with the blue? Your call. 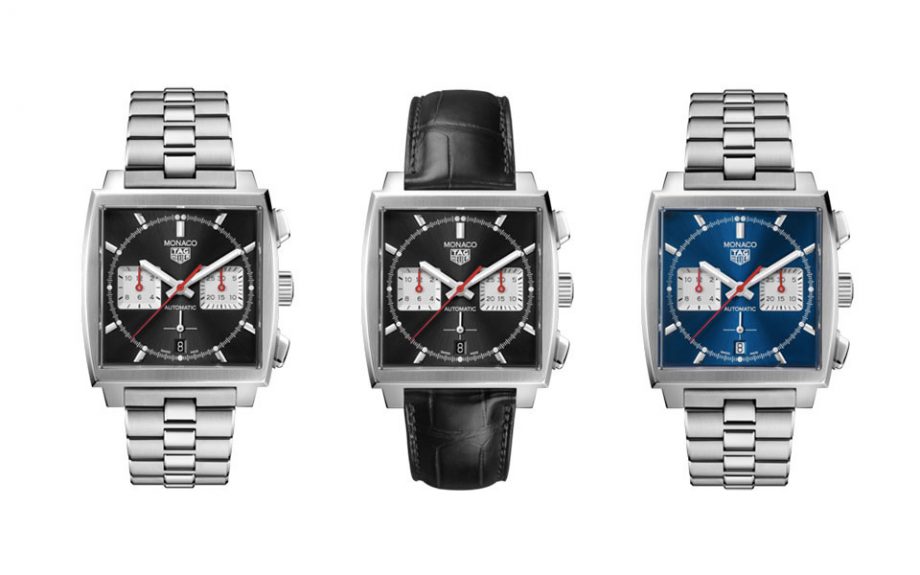