In a matter of just two weeks into his presidency, Donald Trump has managed to rile up millions of people from around the globe via his sweeping reforms.

The latest to join the outcry of blatant discrimination by the U.S President is the Nike CEO himself, Mark Parker.

Parker, who is often an advocate of political and human issues, released a public statement over the weekend which details Nike’s view on the of banning Syrian refugees from entering America alongside citizens of Muslim countries such as Iran, Iraq, Libya, Somalia, Sudan, Syria and Yemen for 90 days.

In the statement Parker stressed that, “Nike believes in a world where everyone celebrates the power of diversity.”

“Regardless of whether or how you worship, where you come from or who you love, everyone’s individual experience is what makes us stronger as a whole,” he continued.

“Nike stands together against bigotry and any form of discrimination.”

You can read the full statement below in which Parker references four time gold medal distance runner Sir Mo Farah as a prime example of a person who left Somalia for Britain and now calls Portland home alongside his wife and children.

His training facility is located in Ethiopia which could jeopardise his return home to his family. 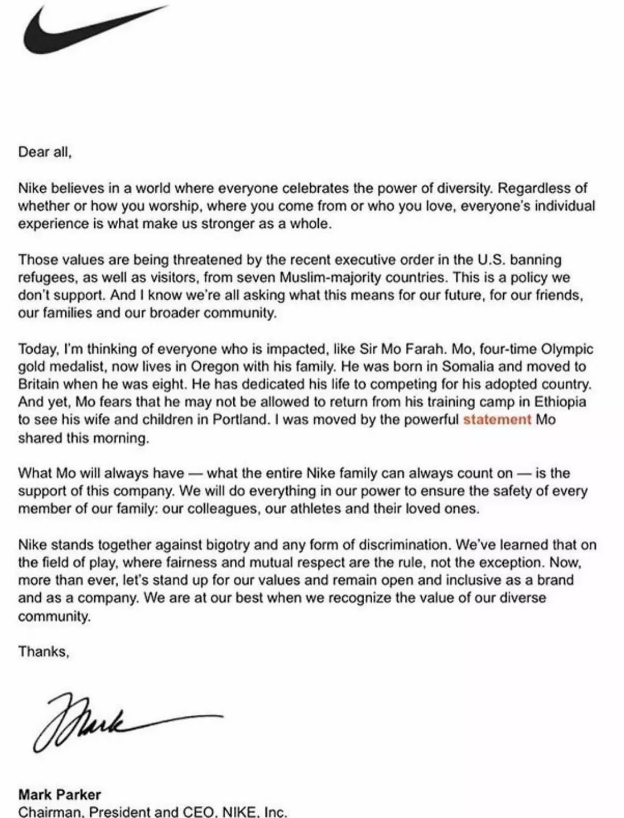