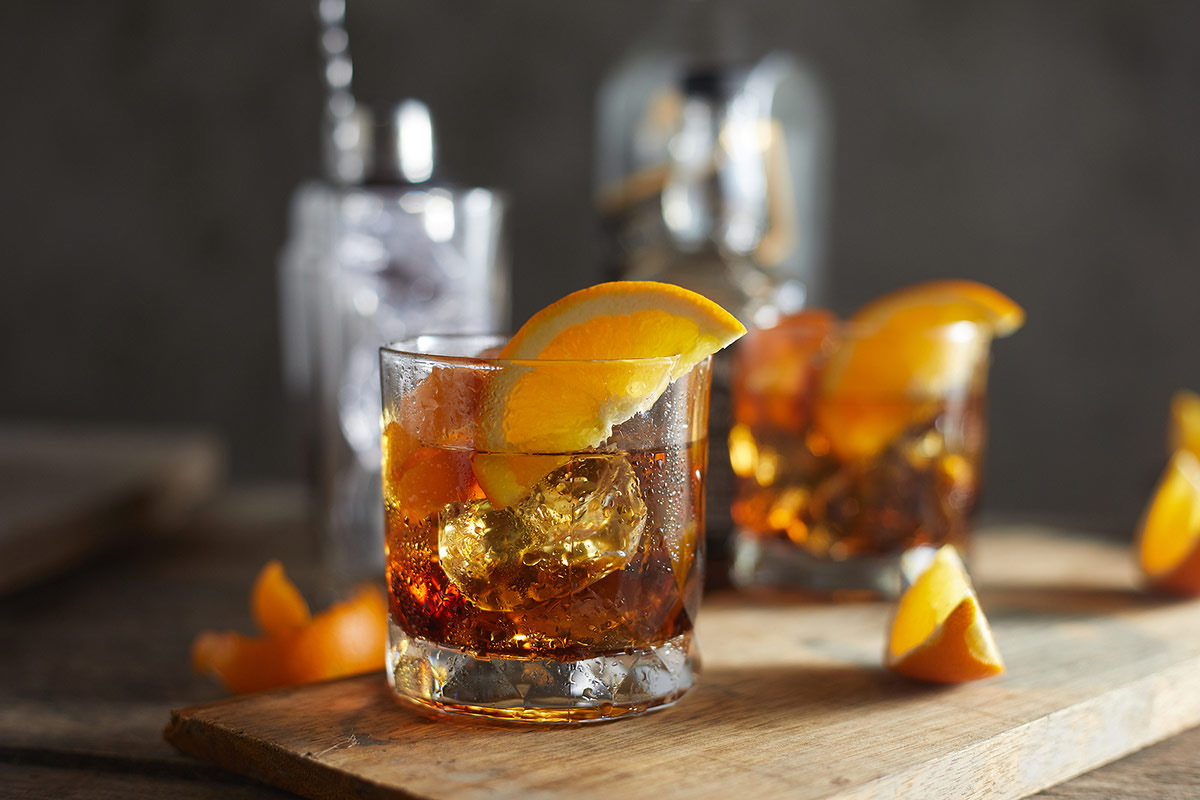 For truly magnificent bastards and dapper gentlemen, when it comes to ordering a cocktail there are two main options that spring to mind: a Negroni, or an Old Fashioned. Served in rocks glasses (also known as old fashioned glasses due to their long association with the eponymous cocktail) they’re the very definition of a ‘man’s’ cocktail – yes, even for you Australian men who would rather have a couple of cold ones after a day at work.

An Old Fashioned is one of the all-time cocktail classics. It’s incredibly easy to make but even easier to muck up, and is a cocktail with a long and illustrious history. It exudes both sweet and bitter flavours and was the cocktail of choice for Mad Men’s leading character Don Draper (and you can’t get more manly than that).

Over the years it has gone through a few variations, whether it be a particular bar’s own recipe or a city’s call for a particular spirit to be used. What has remained though, is the incredibly simple nature of their DNA. So to learn all there is to know about the Old Fashioned, and how to make your own sublime-tasting one, read on.

Origin Of The Old Fashioned

The recipe for an Old Fashioned is technically the same as what should constitute a cocktail. By that, we mean the first documented use of the word cocktail appeared in the May 13, 1806 issue of The Balance and Columbian Repository in Hudson, New York. The editor at the time wrote that a cocktail was a “potent concoction of spirits, bitters, water, and sugar.” That very recipe morphed into the Old Fashioned.

Despite the majority of Old Fashioned cocktails being made with a whiskey base, the original definition left the base spirit open to interpretation. Still, in the 1800s, gin, rum and brandy-based Old Fashioneds could be found in New York City bars. If you’re someone who enjoys both brandy and whisky, you may want to try making an Old Fashioned using Martell Blue Swift.

As a side note, for those unaware, you will notice a difference in spelling of whiskey and whisky. Both are correct, but whiskey, with the ‘e’, tends to refer to Irish and American whiskies. Whisky is used for Scottish whiskies, and those from any other country, such as Japan and Australia.

At one time, absinthe or orange curaçao could also be found. Fortunately, the use of these is no longer as common. Whiskey eventually became to be the more popular spirit to be used, with rye besting Bourbon.

According to Thrillist, the first recipe was published in the 1862 book, Jerry Thomas’ Bartenders Guide: How To Mix Drinks, which detailed how to make an Old Fashioned Holland Gin Cocktail.

It’s also claimed the term “old fashioned cocktails” didn’t appear in print until a February 1880 edition of The Chicago Daily Tribune, although Louisville, Kentucky bar the Pendennis Club, claims to have invented the drink in 1881. However, these claims relate to whiskey-based Old Fashioneds. Louisville insists on this claim to this day, and as a result, continues to celebrate “Old Fashioned Fortnight” and National Bourbon Day on June 14th.

Old Fashioned cocktails are super simple as they have just three ingredients, excluding the garnish:

No matter which spirit was used in the earliest days of the Old Fashioned, they all called for a recipe that included dissolving a small lump of sugar in a class, adding a dash of water and ice, along with a couple of dashes of Angostura bitters and a small piece of lemon peel. The spirit is added and stirred in the glass before serving.

But being the sophisticated gent that you are, you’re going to order or make your Old Fashioned with whiskey. In which case, you’ll want to follow this recipe.

How To Drink An Old Fashioned

Like Don Draper of course. For the man who has really nailed life, he will drink it in his Eames chair, cigar in hand, and his favourite album on the record player. Whether he enjoys it with a partner by his side, it matters not. It might be a cocktail, but it’s still a short drink, so sip and savour each delightful mouthful.

As Dale Schoon of Earl’s Juke Joint previously told DMARGE, “The great thing about an Old Fashioned is it makes whisky more approachable. Maker’s Mark is perfect for the job. Switching rye out for wheat makes for a sweeter, softer spirit and in turn, a gentle sipping Old Fashioned with a long, warm finish,”

For further inspiration, check out the video below.

Why is it called an Old Fashioned drink?

The name was inspired by drinkers who refused to change with the time, sticking to the old fashioned way of drinking cocktails – those made with a brown spirit, bitters, water and sugar.

Can you use honey in your Old Fashioned cocktail?

Yes. Some variations of Old Fashioned use honey instead of sugar. Honey is used like a simple syrup and adds a floral flavor to the finished drink. For your Old Fashioned, one teaspoon is enough.

How much is an Old Fashioned at a bar?

An Old Fashioned cocktail is one of the cheapest whiskey-based drinks you can order at a bar. You can get it for less than $10. It is also one of the best-selling cocktails in the world.