It sits more than thirty centimetres from the ground. It has a two tonne towing capacity, five seats, enough boot space for an unhealthy IKEA haul (or skis if you fold down the rear seats) and yet, Porsche still calls it the “sports car in its segment”. Are they dreaming? Apparently not. We got behind the wheel of the 2019 Porsche Macan S to discover that an SUV can actually be fun…maybe a little too much fun.

1. The latest Porsche Macan S is a proper Porsche, both in design and driving dynamics 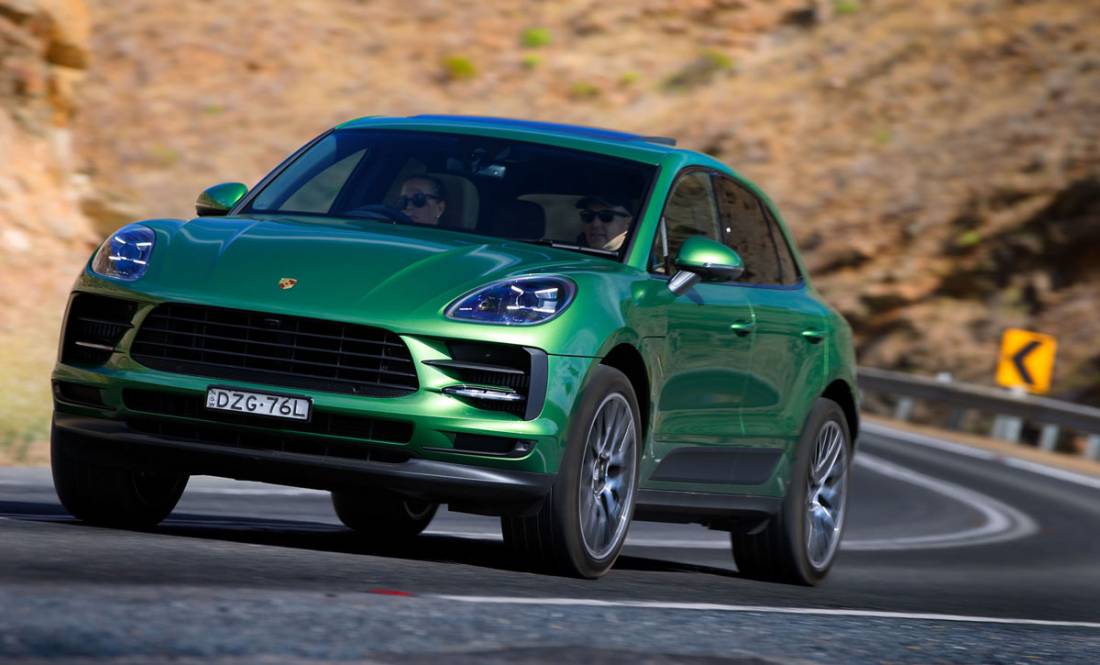 From the outside you’d barely notice the 2019 Macan’s facelift. Look closer though and the freshly understated sports car details will start to reveal themselves, both on the surface and under the skin.

2. The beauty of it lies in experiencing the dual personalities of the car 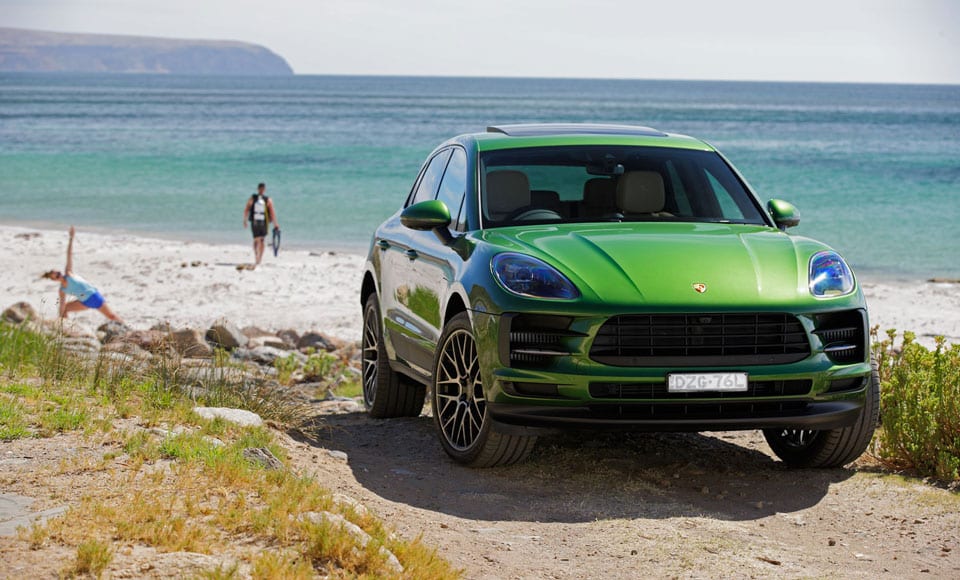 It can be as docile and SUV-ish as you’d want in traffic, but come Sport mode the car simply takes on a new persona with the dynamics of a much smaller and nimbler hot hatch.

3. The engine brings the soul of a Porsche into the marque’s most practical entry model 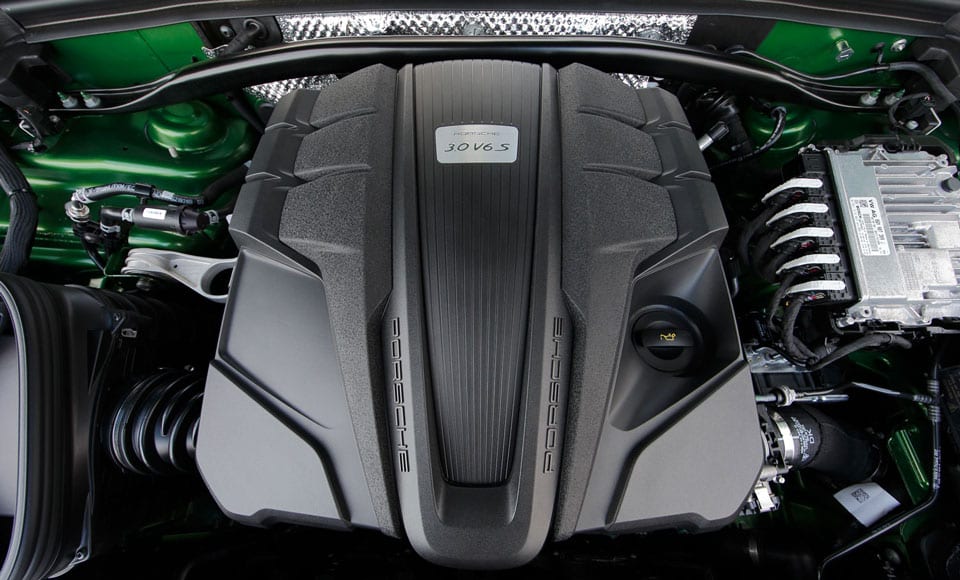 Squeezing performance out of an SUV is no easy feat. Most end up being straight line warriors with bragging rights to the quarter mile (and fuel consumption to match), but we all know that’s not how the Stuttgart clan work. Whilst the new Macan will come with two variants in four cylinder petrol and V6 guise, it’s the latter which convinced us of its true sports car pedigree.

4. The engine’s sound isn’t as intrusive as it would be in their 911 or Boxster… 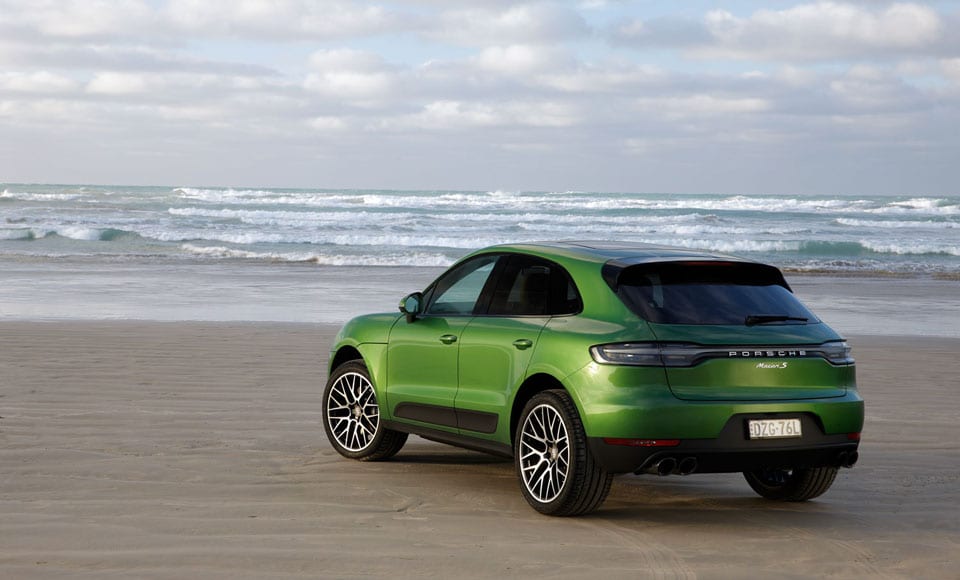 …But it’s evident once you turn the steering wheel dial to ‘Sport’ or ‘Sport+’. Above 4,000rpm the engine sings in an elegant grand tourer kind of way. Quad exhaust tips help here. And we haven’t even gotten to the driving dynamics yet. 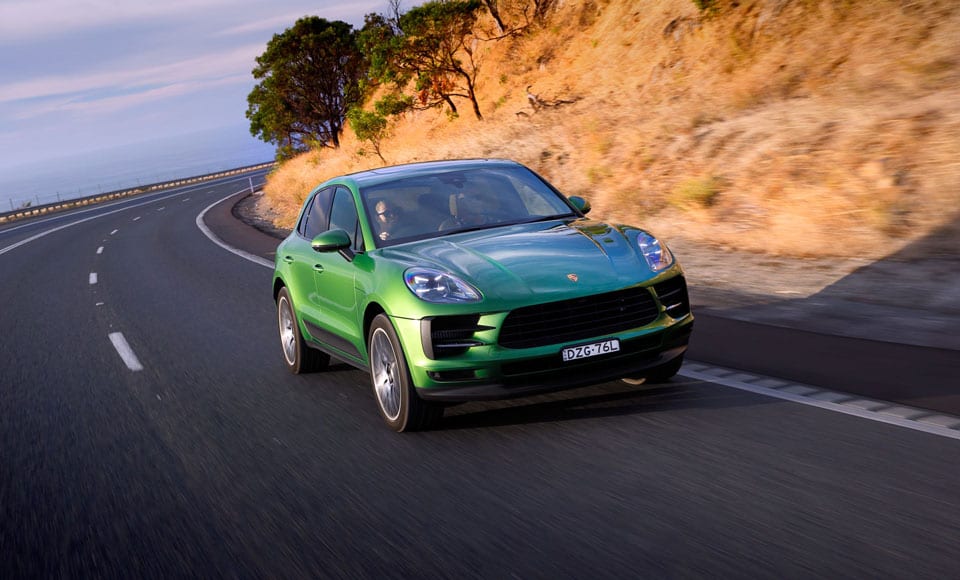 The new Macan sees an extra 10kW and 20Nm over the outgoing model so Porsche saw the need to upgrade the suspension, driveline and associated hardware to ensure that the car retained its versatile ride and handling characteristics.

6. It eats up changing driving conditions like a champ 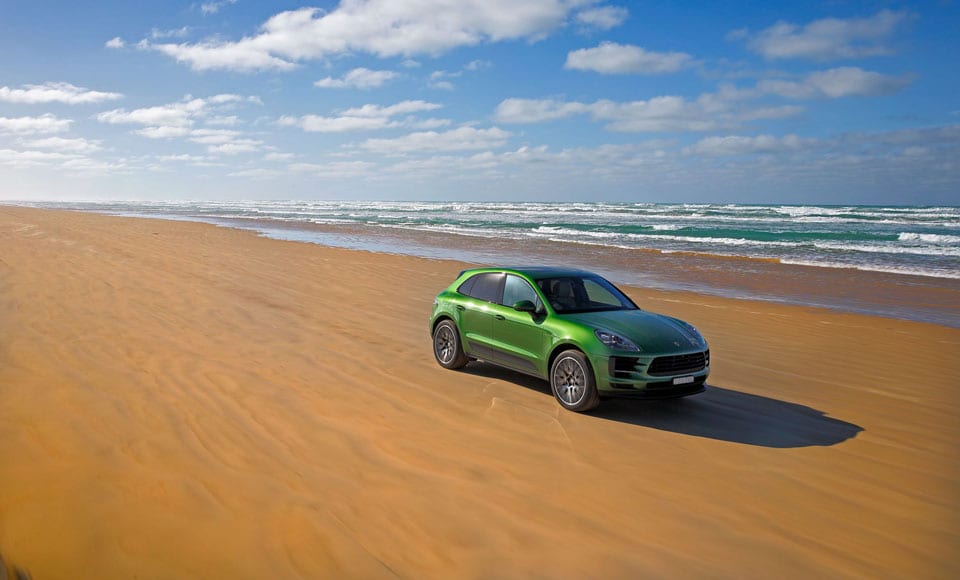 During our trip the Macan made a seamless transition between heavy Melbourne traffic and spirited driving on less than ideal surfaces (damp, bumpy and tarmac leading into loose gravel). And it did it with such composure that the driver feels like they’re steering one of the sharpest SUVs on the market today – a term you don’t often hear in the segment.

7. Tyres are ridiculously wide and staggered for a good reason… 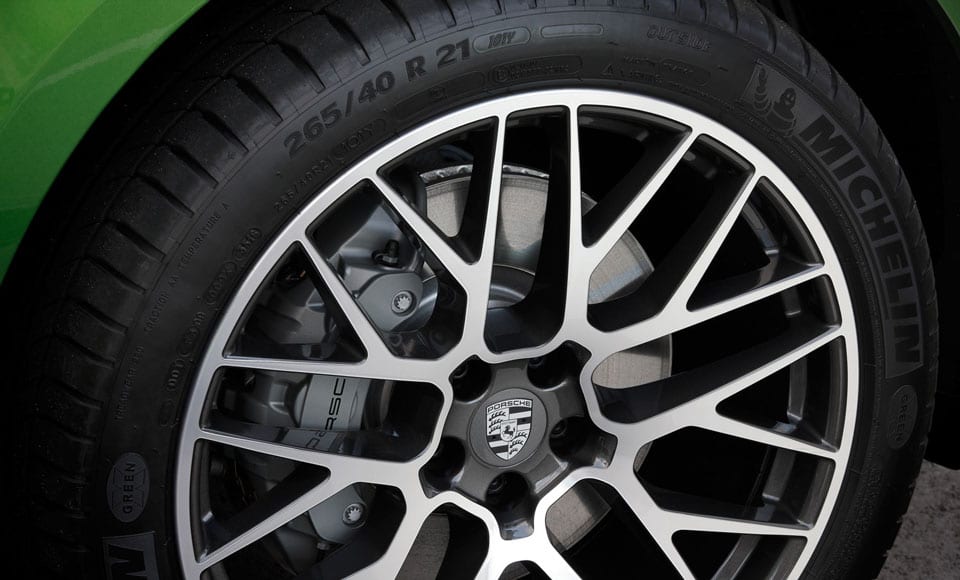 Given Porsche’s philosophy for spirited driving, the Macan S features some of the widest tyres you’ll ever find on a production SUV. Porsche says that this helps the car grip the road better when compared to standard SUVs and it’s pretty damn noticeable on the long winding bends and on exit corners.

8. Elegances comes as an added extra 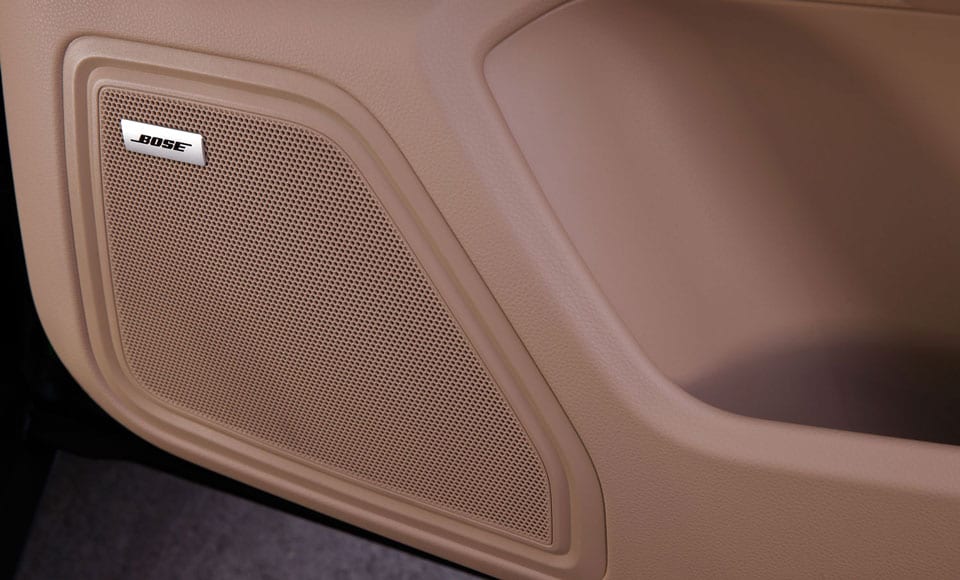 You can trust the Germans to provide a plush and no-nonsense interior for a premium badge like a Porsche. Whilst the Macan offers an extensive level of trim options as ad-ons, it can  quickly push the price of the car past six figures.

9. Fit out your Macan right and you could basically live in the car 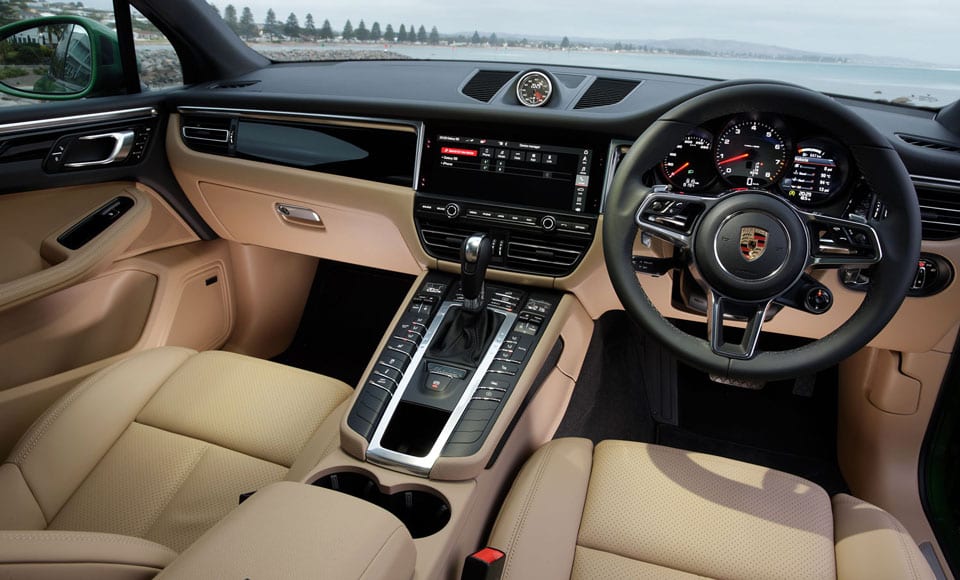 Our Macan saw carbon fibre highlights on the doors and across the front of the dash. The dash is a talking point but we’ll get to that in a bit. The Macan’s seats were all wrapped in soft and supple tan leather which varies in colour depending on your preference. As standard, the Macan has Alcantara seat surfaces whilst the seat bolsters are wrapped in premium leatherette. Personalisation is the name of the game here.

10. The dash is nicer if you get the premium trim package

We noticed the difference in feel between some of the Macans. The standard models received harder plastic on top whilst the optioned ones received a much nicer and more premium soft-touch plastic. We would have liked to see the latter as standard. Also the brushed aluminium highlights aren’t as nice as the piano black or carbon fibre highlights.

11. There’s a bloody big screen which is surprisingly useful 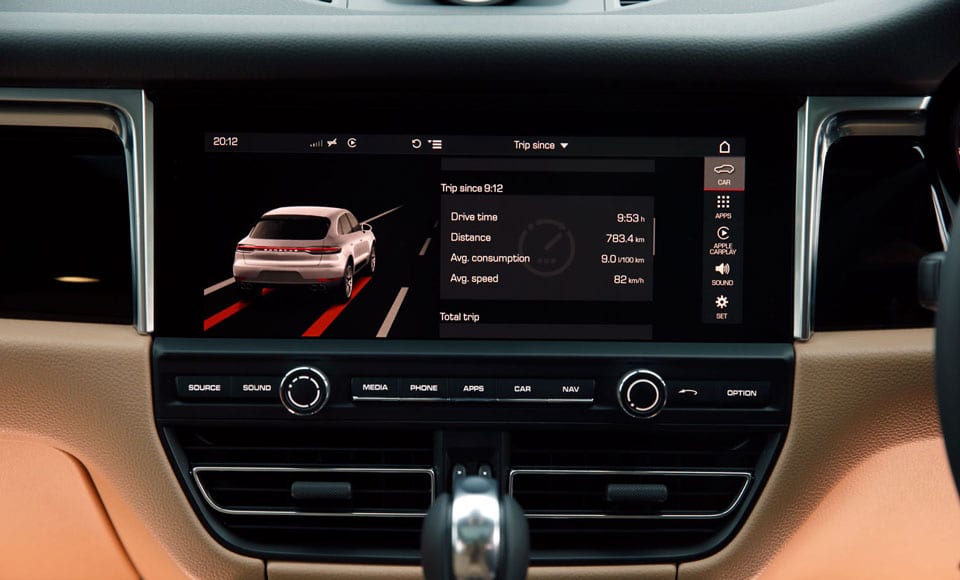 Tesla started the trend and now other manufacturers have jumped on board. We’re talking about big touchscreen panels and the Macan’s one lobs in at 10.9-inches – a jump from 7.2-inches. And this one has quite a few new tricks.

12. You’re always connected to the web 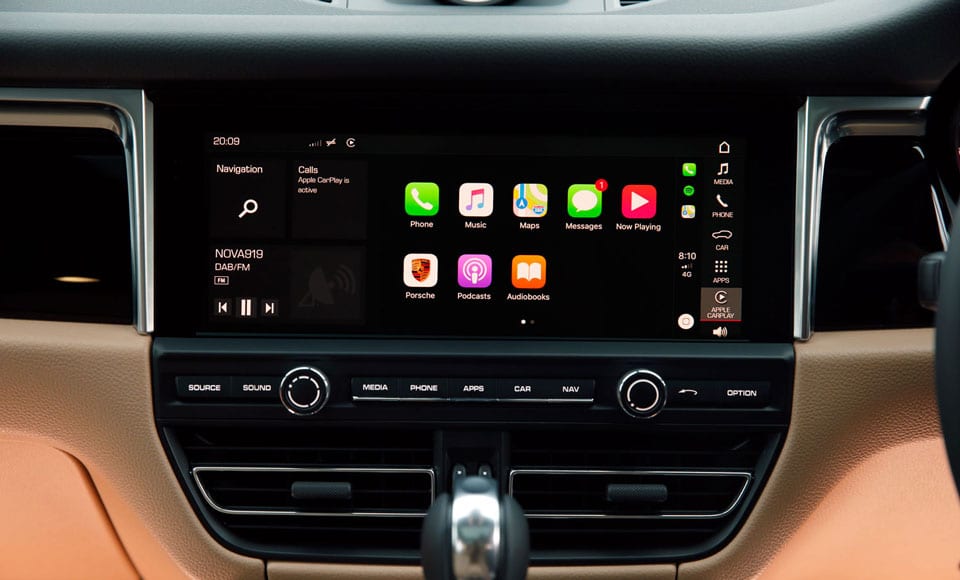 The increased real estate makes the most of the latest Porsche Communication Management (PCM) platform which allows drivers to be permanently connected to the internet (best your sim card has unlimited data). This essentially opens up the car’s capabilities to use internet-based services like Google Maps and reading your emails out loud.

13. You can even turn it into a personal cinema 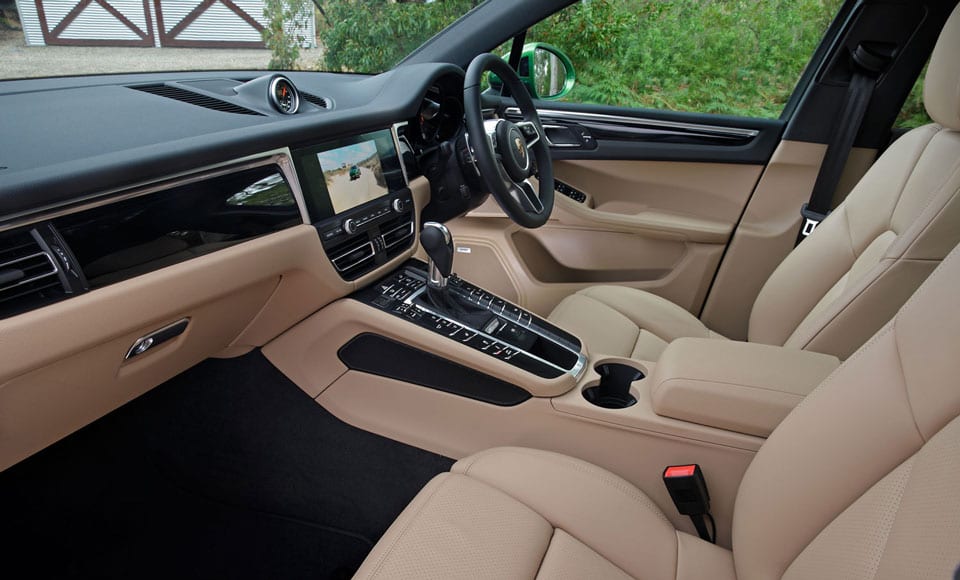 When stationary the car can playback MPEG-4 and other video formats via the big screen. Simply plug in a USB or memory card in the slot and you’ll be able to access the files like you would on a computer. 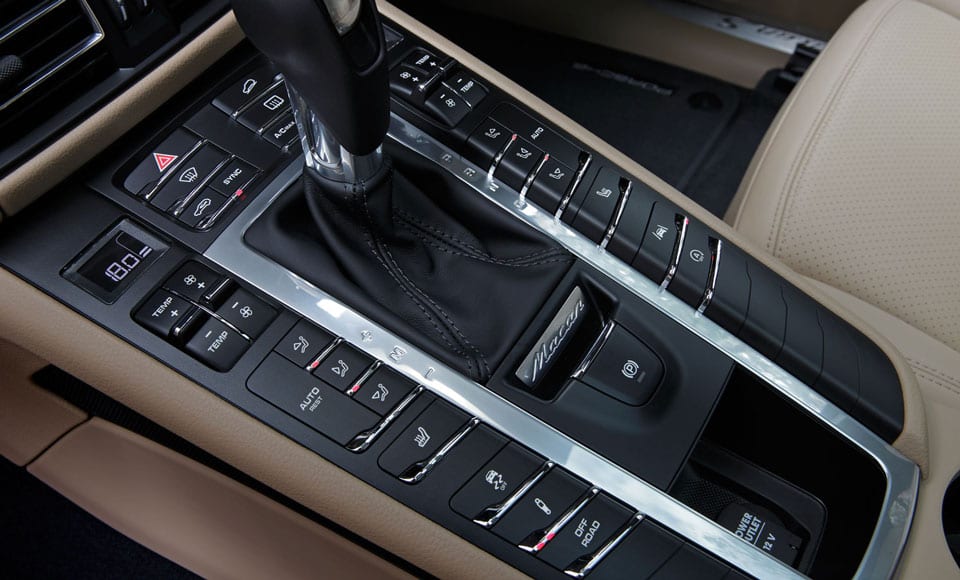 If you’ve never driven a modern day Porsche and you step inside the new Macan, you might be intimidated by the amount of buttons running along the centre console. We’ve had steers of 911s and Boxsters and whilst it was familiar, we were still intimidated when we first set foot in the car. A quick glance over will put most of the confusion at ease. The buttons essentially adjusts things like suspension, climate control, lane assist, descent assist and more.

15. The boot opening button is in an odd position 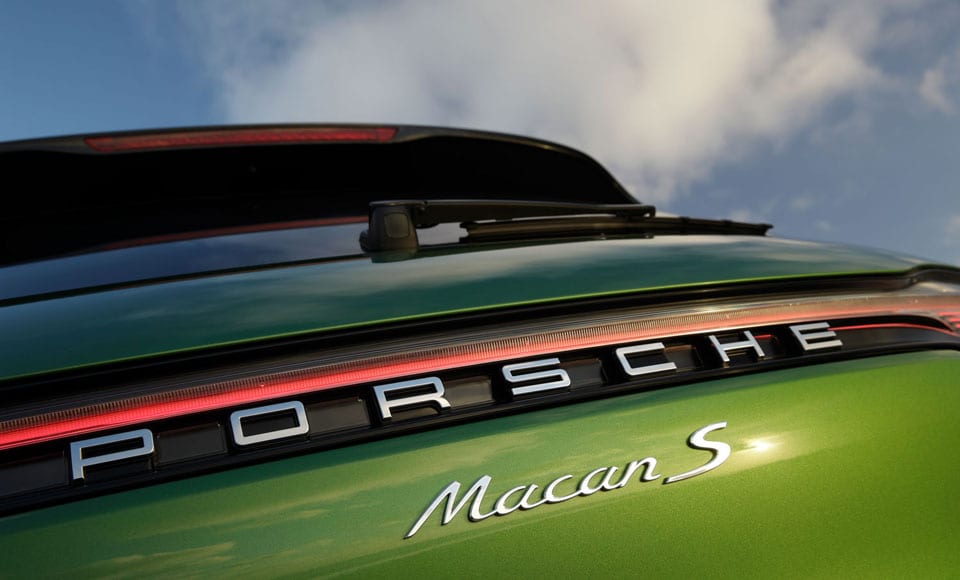 Watching drivers sweeping the tail gate with their foot was quite amusing as most SUVs now have a sensor down there to activate the boot opening. Not on the Macan. Theirs is a simple button located on the windscreen wiper bezel. If you miss that, there are no latches or sensors to indicate how to open the boot. Not something we hate about the Macan but just an anomaly we’ve yet to experience.

16. But the 500-litre boot space is pretty amazing 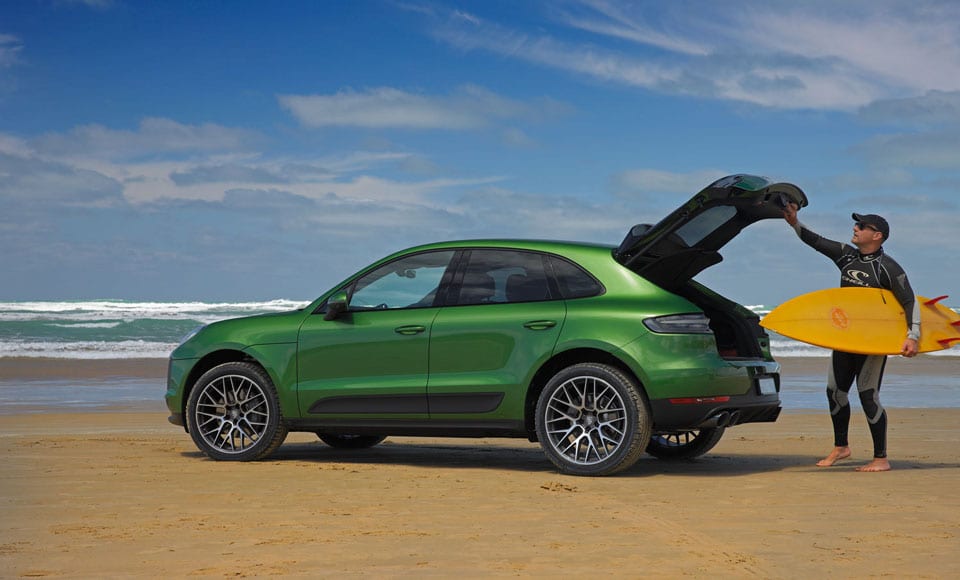 500-litres is a hell of a lot of boot space and that’s part of why the Macan is one of highest selling models in Australia amongst first time Porsche buyers. The Porsche people say that customers with young families but who love driving are the Macan’s main customers.

17. Full LED lights look as good as they work 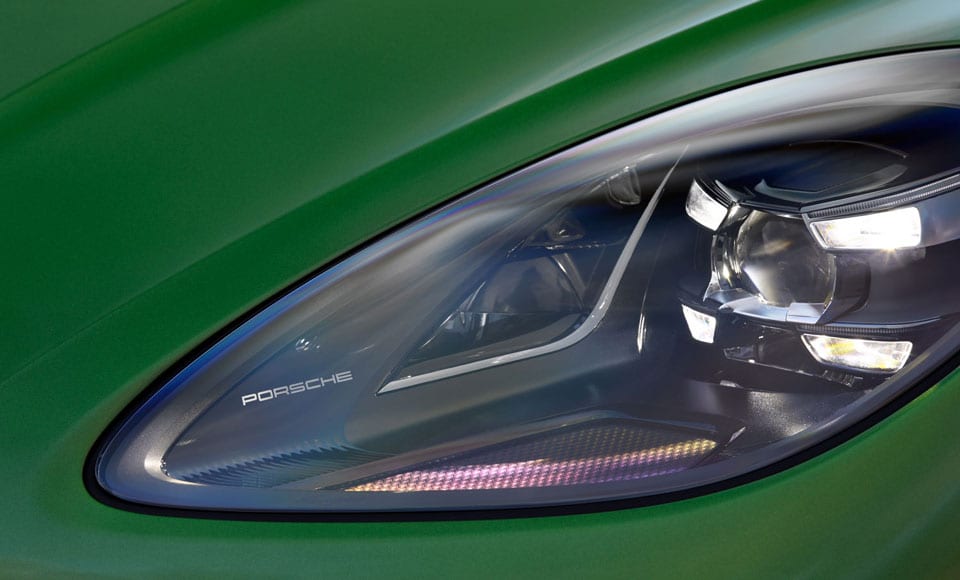 The Macan’s headlights are now full LED units as standard. This means the four-point daytime running lights are attention-grabbing whilst also being functional as dusk sets in. The powerful headlights also track the corner and can automatically switch between main and dipped beam. 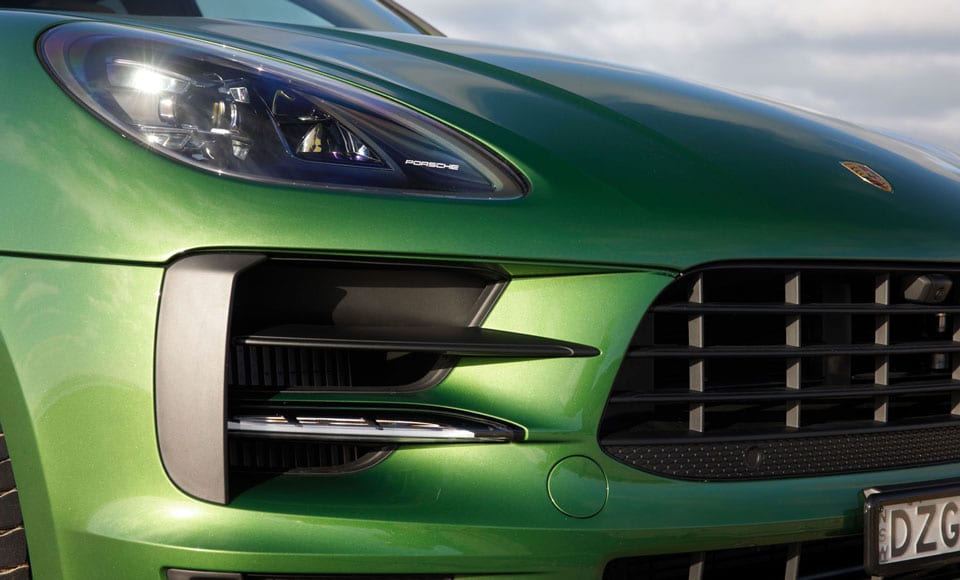 One cool feature we were shown is the active cooling fins behind the car’s front grill. When the car is first started the fins are closed to get the engine up to optimum operating temps. Once it reaches this temperature, the fins open to allow air to cool the turbo and exhaust manifold. The result is much better efficiency and performance as soon as you start it up.

19. The ‘Sport Response’ button is loads of fun 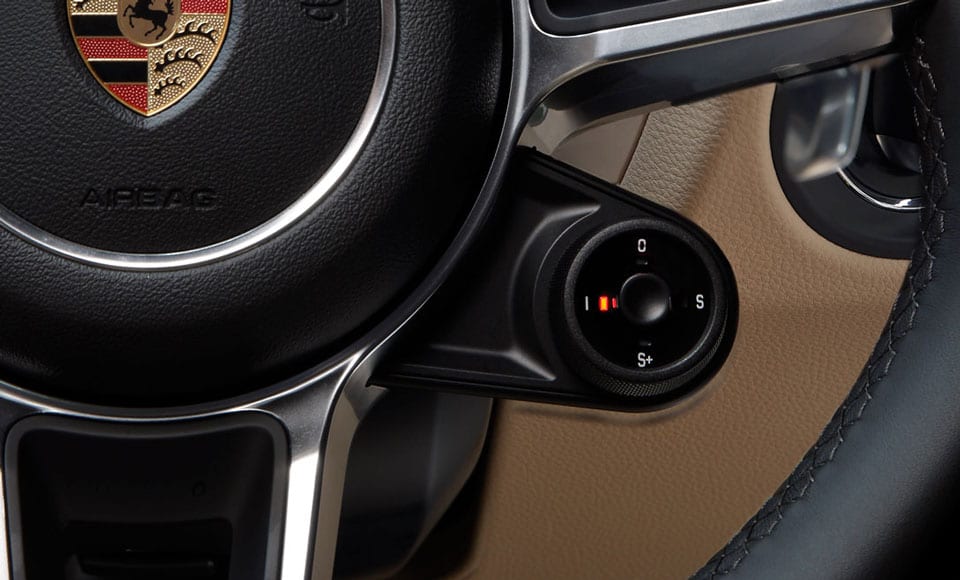 Those who watch too many car chase films will love the optional Sports Chrono Package. This adds on a circular toggle switch the the steering wheel which allows drivers to change driving modes, but also includes a button. Press this ‘Sport Response’ button and the dial gets turned to maximum performance for twenty seconds. For overtaking purposes, obviously.

20. Very agile car through the fast winding country backroads – a win for this SUV 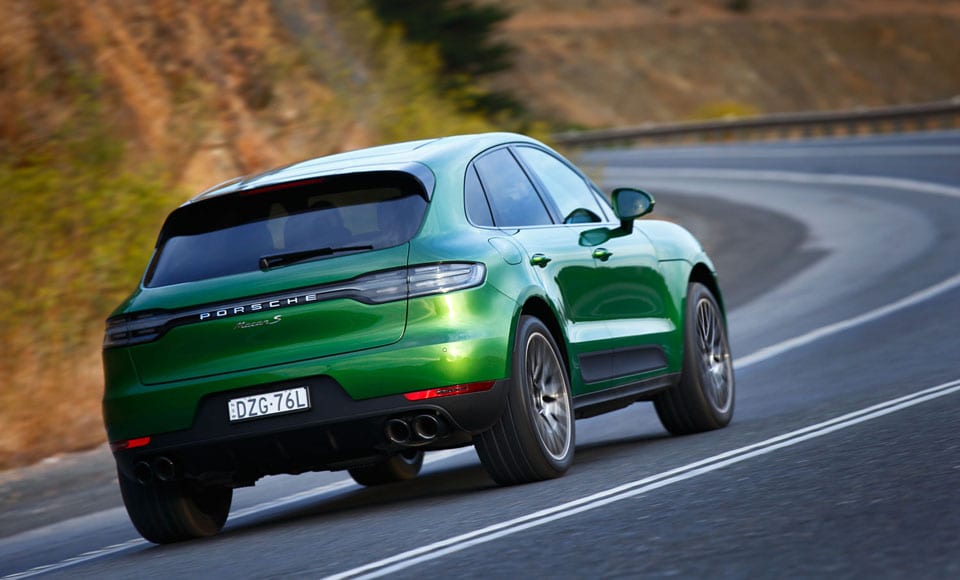 There’s not much to pick on with the new Macan S besides the fact that the faster GTS variant hasn’t arrived locally yet. Bar its odd boot button location and conservative looks (for some), the Macan S is an amazing performer for the modern family with a secret love for taking the scenic windy back roads.