The best thing since sliced bread.

Since the launch of Qatar Airways Qsuite business class product, we had waited patiently for a chance to try it.

Fully enclosed cabins in the 1-2-1 format was a formula never before seen in business class. Since its launch, Delta has also launched a similar product which will hopefully see this become the norm in business class travel. On our way to the annual Swiss watch conference SIHH, we decided to book with Qatar and experience this great new product.

Here’s our review of what’s hot and what’s not with the Qatar business class Qsuite.

1. You can start your flight in the QANTAS first lounge, providing you’re a One World Emerald or QANTAS Platinum member. 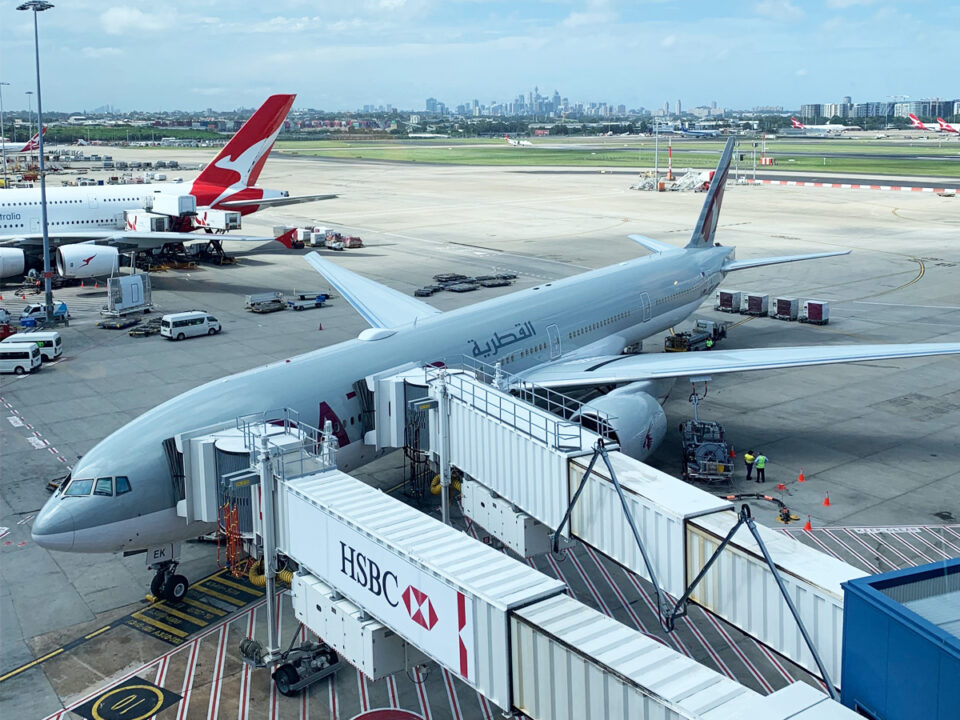 An easy afternoon departure from Gate 10

2. Onboard the Qatar 777-200, the Qsuite is as impressive as it looks in the press photos. Spacious and modern. We didn’t want to jump the gun but this could be business class heaven. 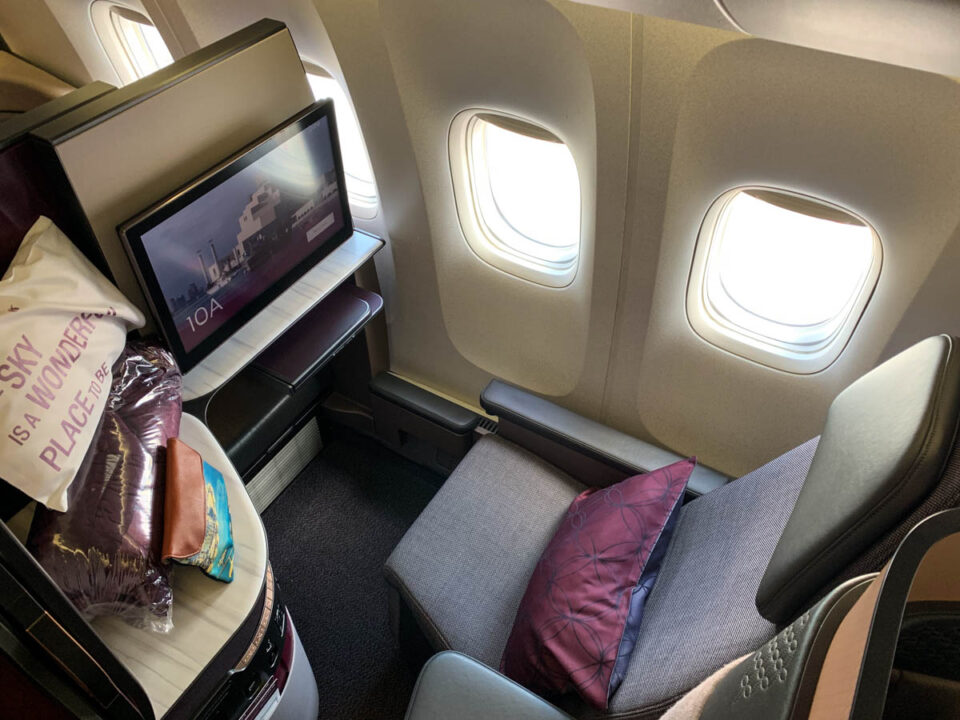 Purple, gold and grey accents, materials are luxurious and feel worth the spend.

3. We jumped on SeatGuru and took their advice of the rear facing 10A for its additional privacy. On comparison, I feel there was not much difference between the forward or rear facing window / aisle seats. 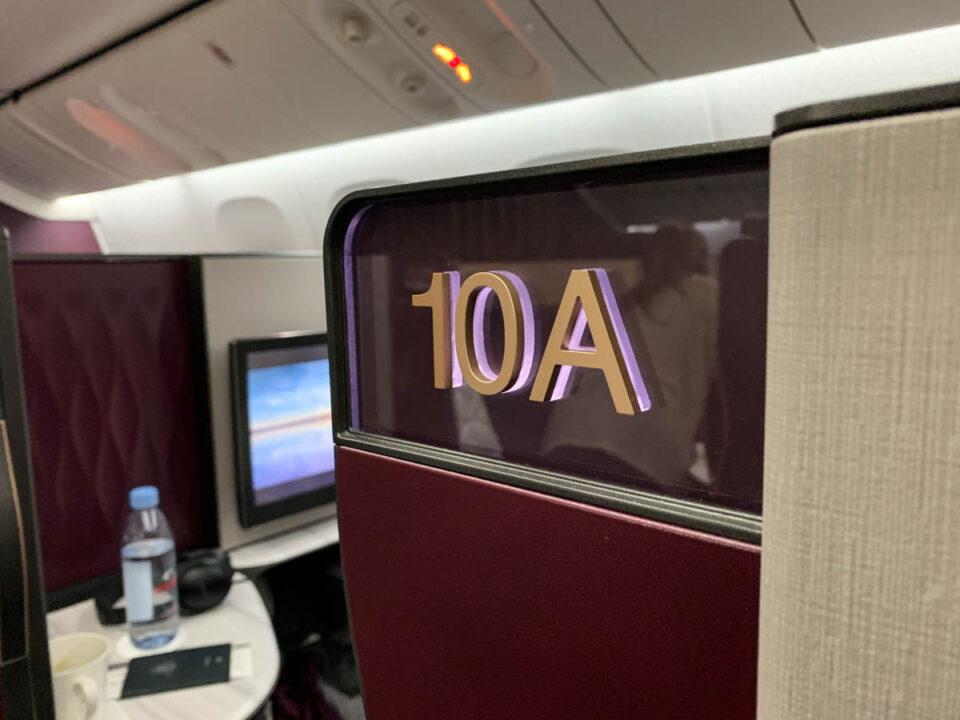 3A/K, 5A/K or 10A/K are the top picks if you’re travelling solo. We were Qantas Platinum / Emerald but did have some issues reserving the seats we wanted.

4. High walls ensure the Qatar Qsuite is private, very private…even without the door closed. Unfortunately my door was broken so it required a folded pyjama bag to keep it closed throughout the flight. 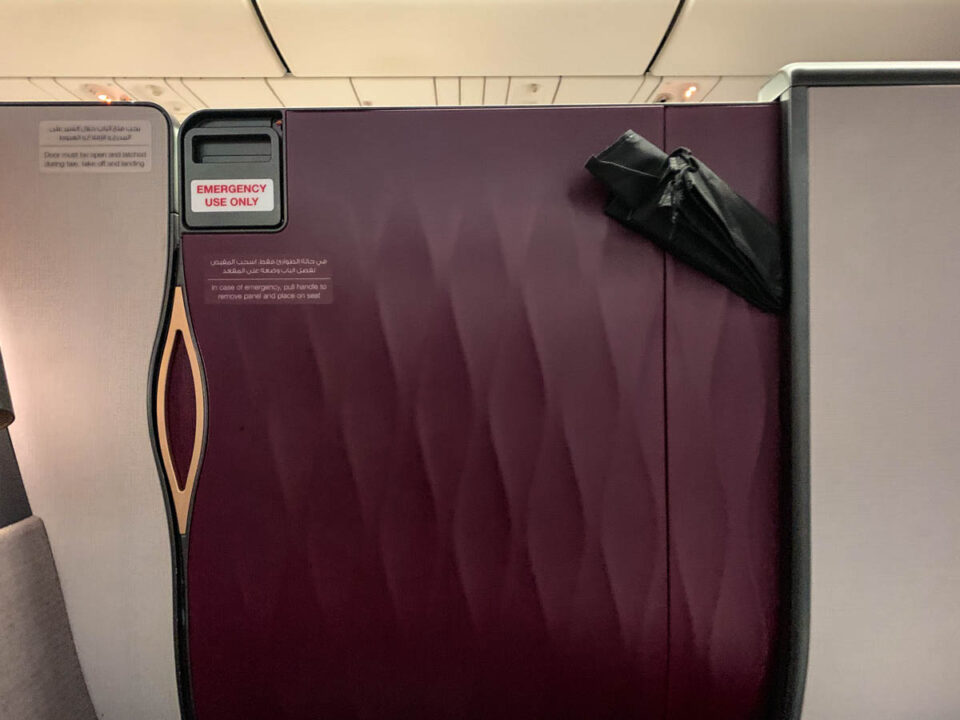 Note: The QSuite door has to be open for take off and landing.

5. Don’t expect to see anyone the entire flight. It may pay to keep it open when you want to catch the flight attendant’s eye for a top up. Facing rear on the window is the best seat and most private. Sitting backwards is no big deal when you’re on the window. 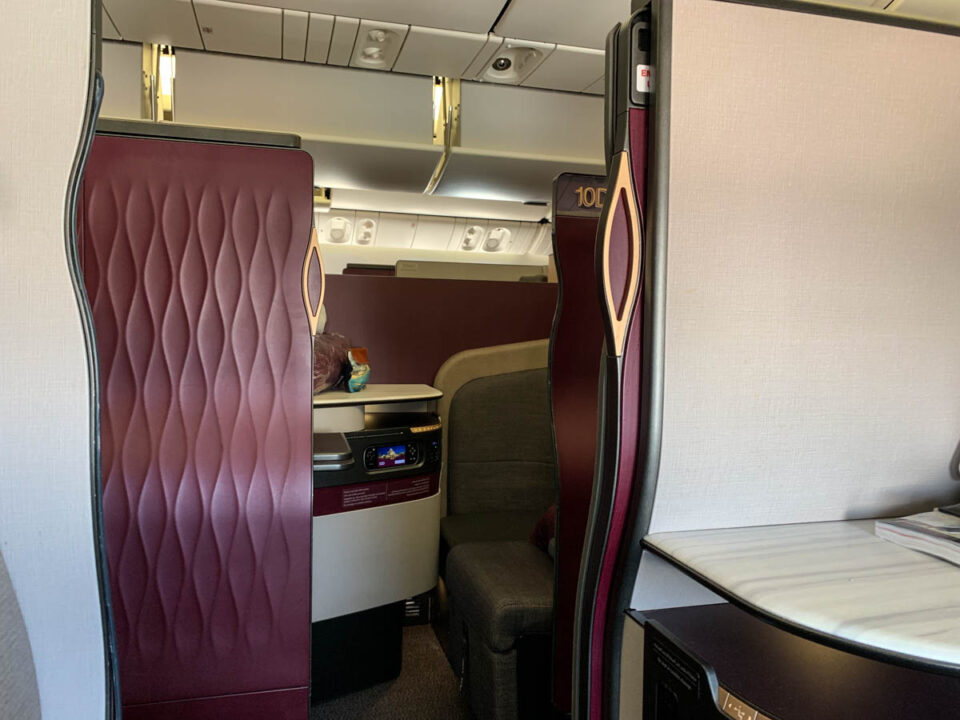 You can, however, see your aisle neighbours – which is a burn. Alternatively Etihad ensures you can’t see anyone with their forward / backward layout.

6. The Qatar amenities kit was one of the better ones. Earplugs, eye-mask, moisturiser and lip-balm all provided by Monte Vibiano. Essentials for a long flight in the air conditioning. 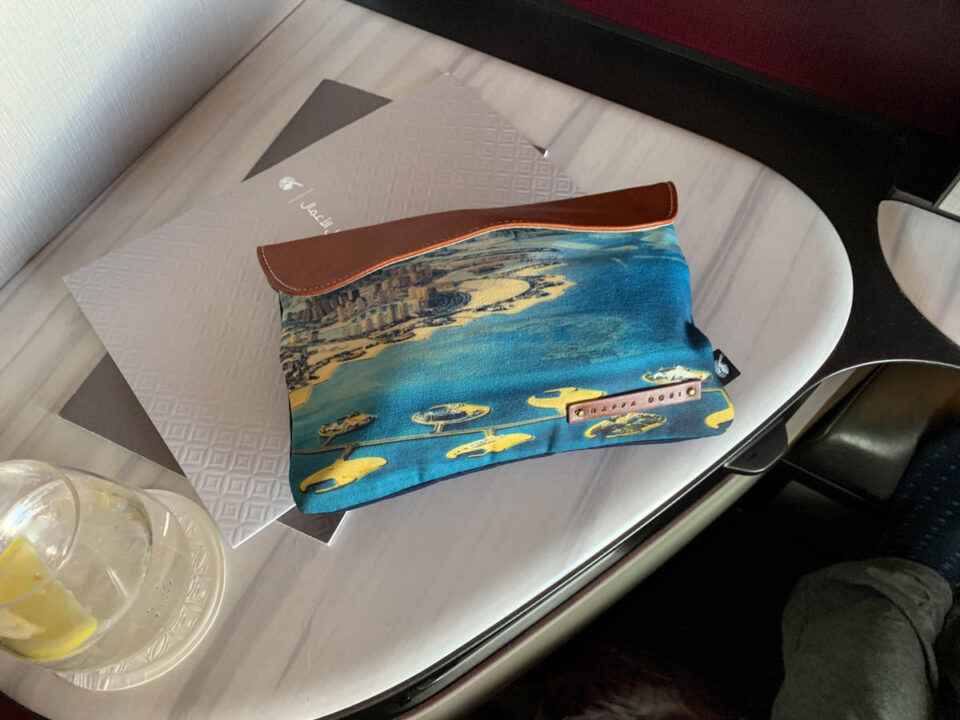 7. Under counter storage is useful for books and headphones. 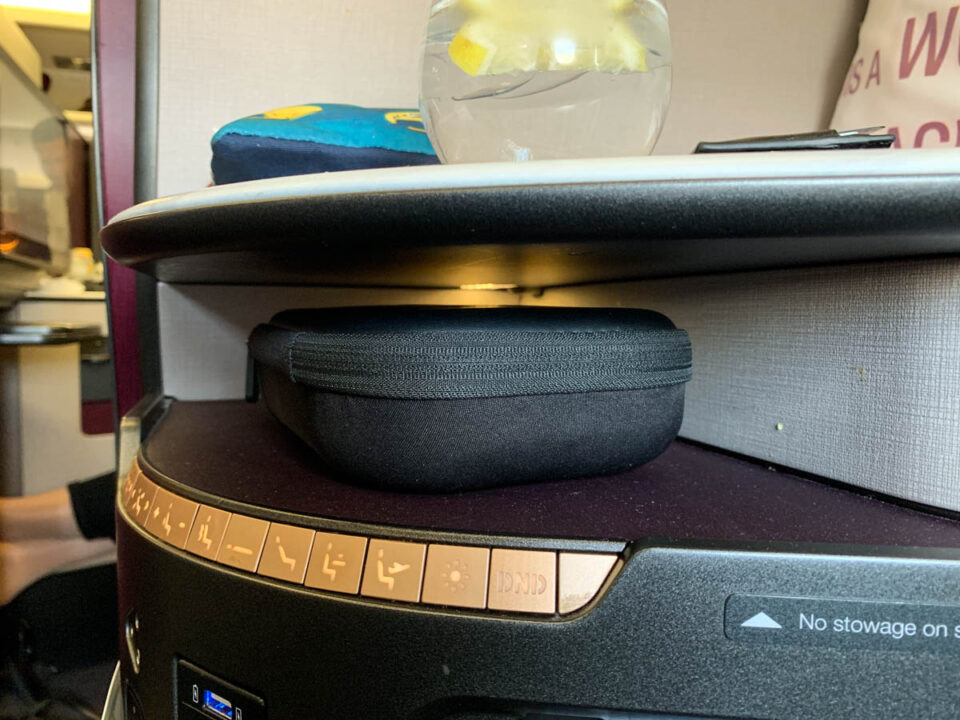 The shelf has lips that ensure your stuff doesn’t slide off during landing.

8. Under the left arm offers an adjustable arm rest and storage with a complimentary bottle of Evian. The arm rest is also adjustable based on your height. 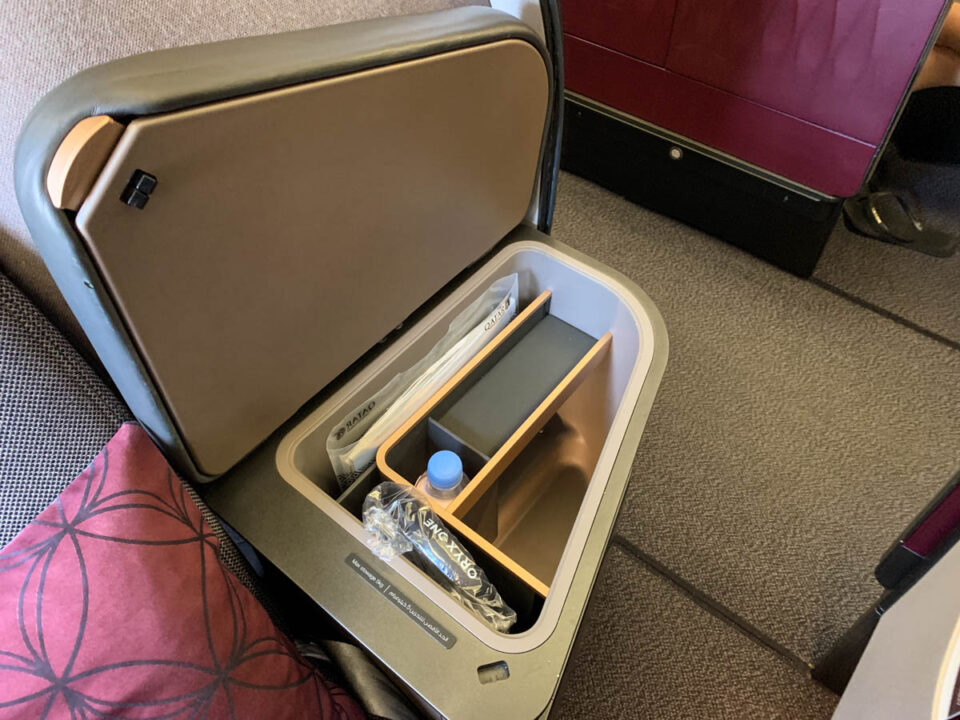 I was able to put my sneakers in here too…as it was the only place to do so.

9. Tray table was a little annoying; my long legs had a tendency to bash into it during the flight. It was no problem, however, when I was laying down or sleeping. 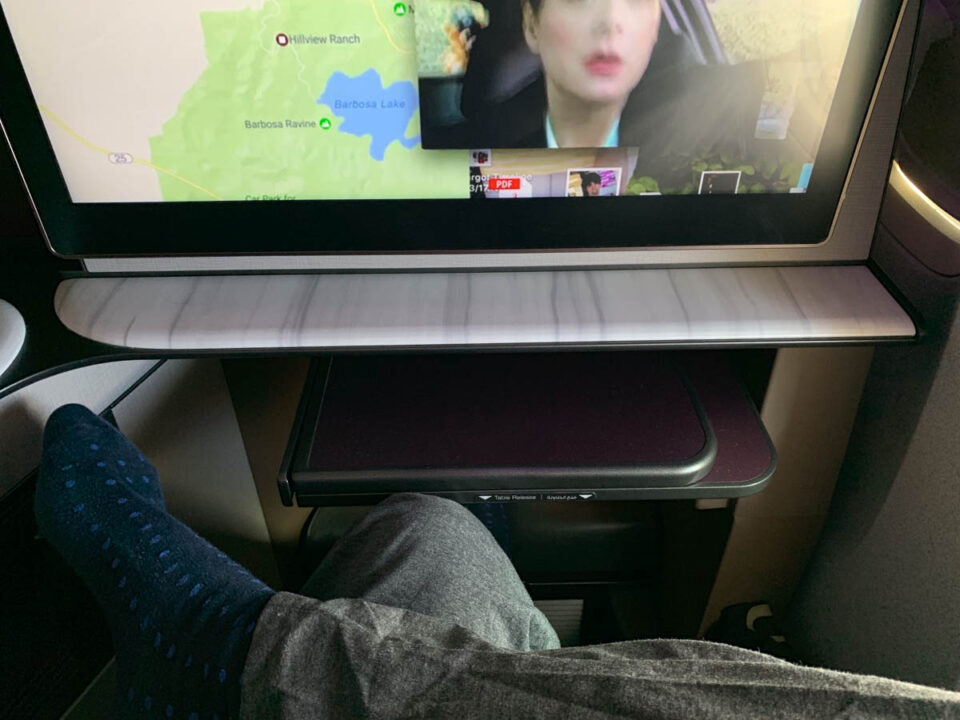 10. The reading light is well protected by the QSuite’s enclosure, so there’s little risk of annoying your neighbours (or being annoyed by theirs). 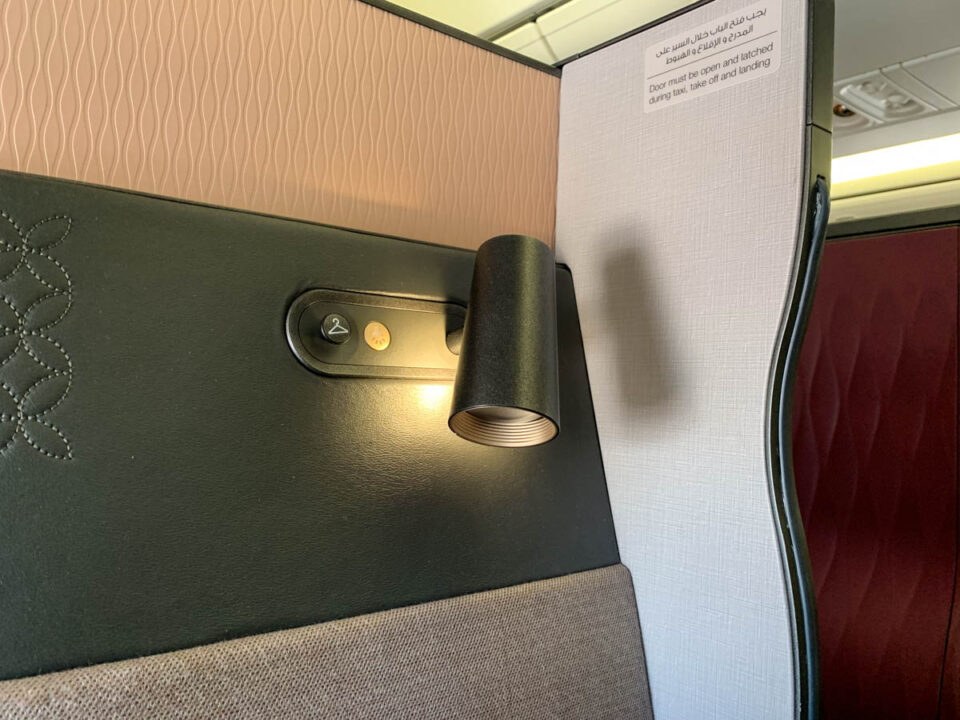 So read on, my friend.

11. Ergonomics of power, plugs and controls is better than most business class seats. Easily reachable yet far enough away without knocking or turning them on in the night. 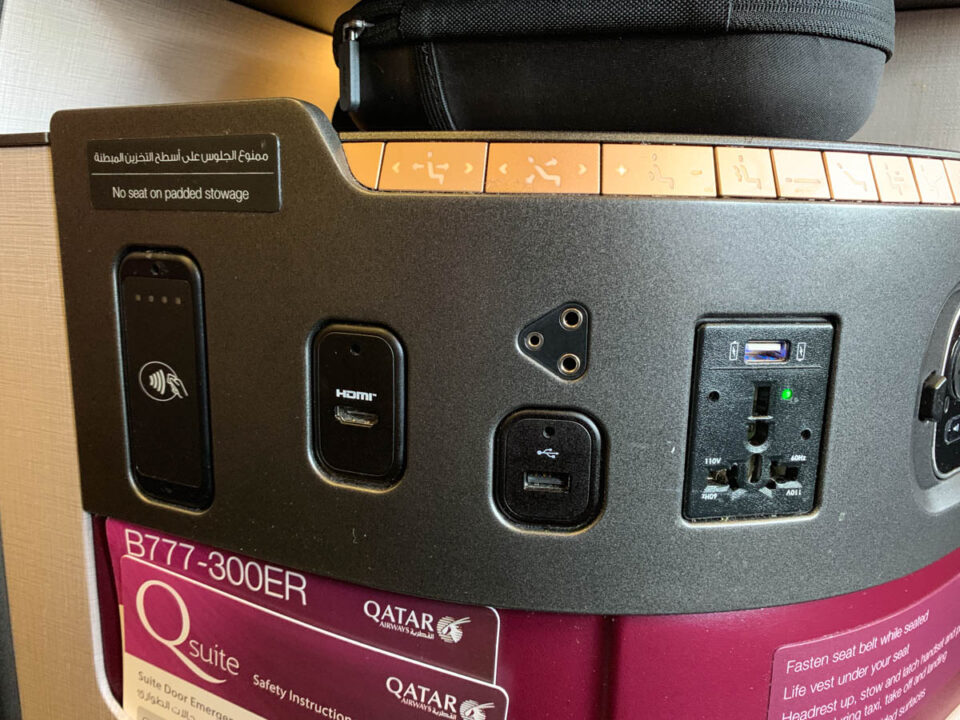 12. The 21.5” entertainment screen is huge and has matte finish. The touch screen is super responsive, UX is very intuitive and well thought out. It’s a step above those of Emirates, Qantas and Singapore. 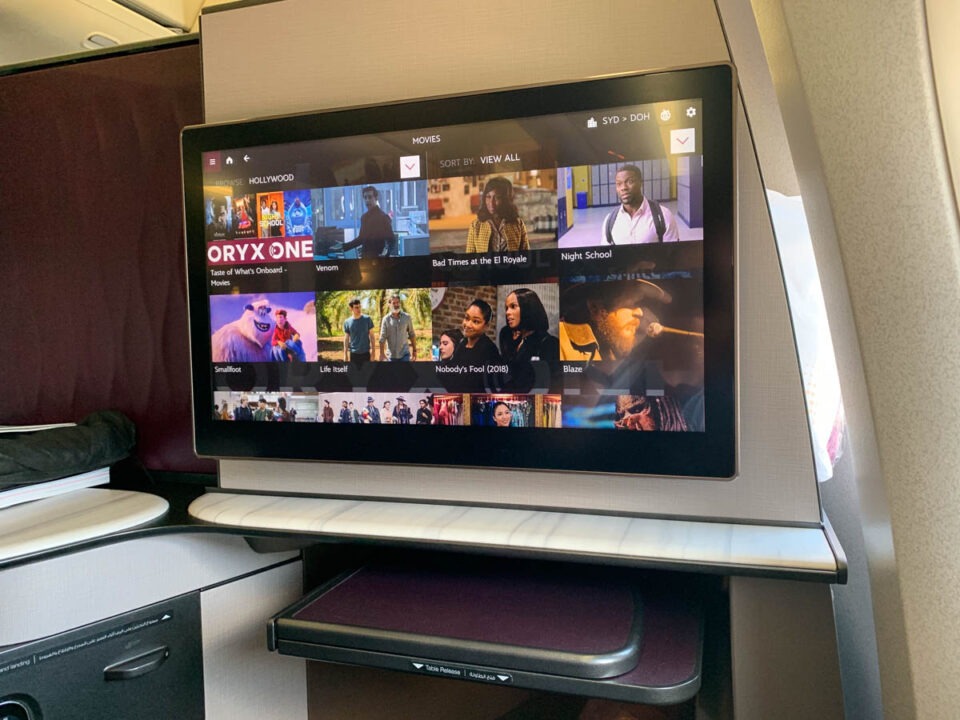 Movies from Hollywood, Bollywood and beyond. However TV selection is limited.

13. Turning the small control screen off during night was a bit confusing, so I gave up and buried it under a blanket. 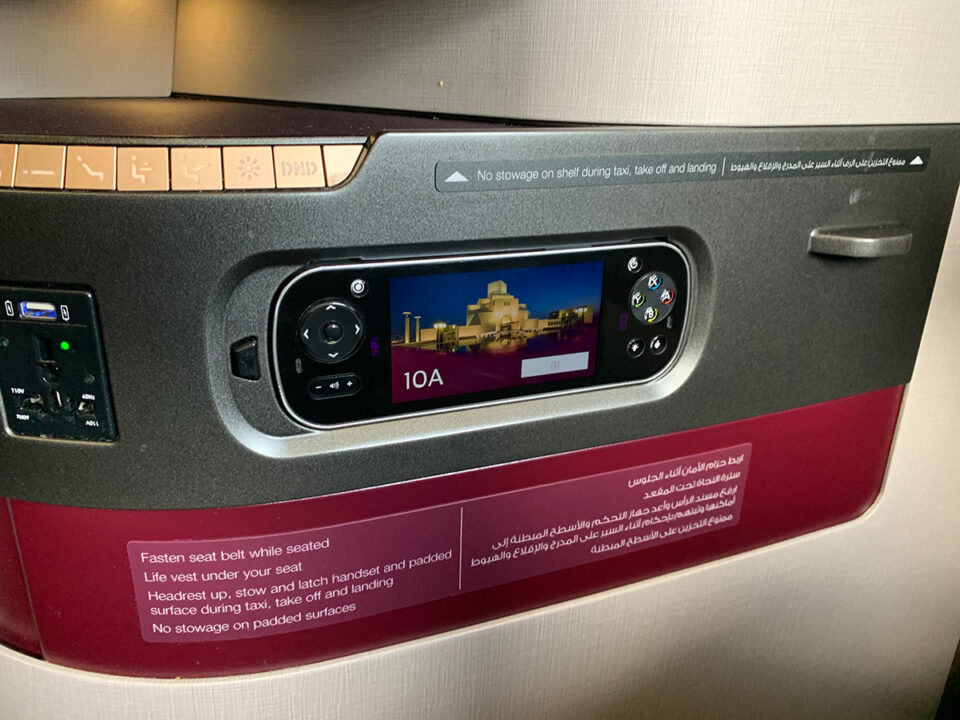 It burnt bright, even at night. 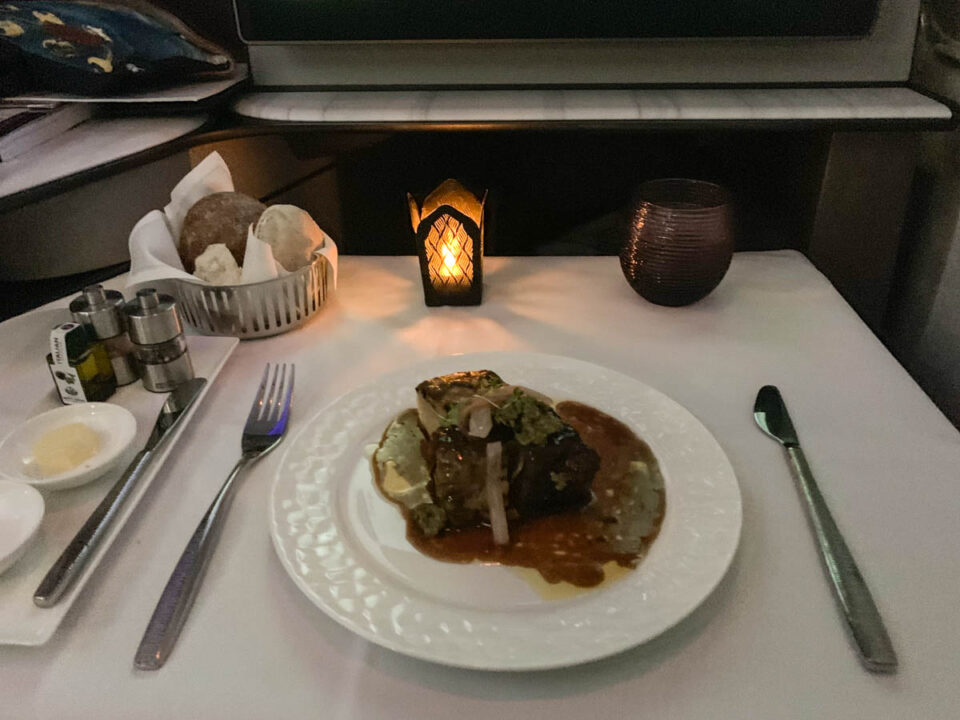 Candlelight supper for one.

15. The beverage list is respectable but lacked big names in the wine and Champagne categories. Three reds on a wine list was a touch limited with only a Bordeaux, Brazilian Cab Sav and Barossa Shiraz on offer. Do not expect any mainstream Champagne brands; Lallier is their bubbles of choice. 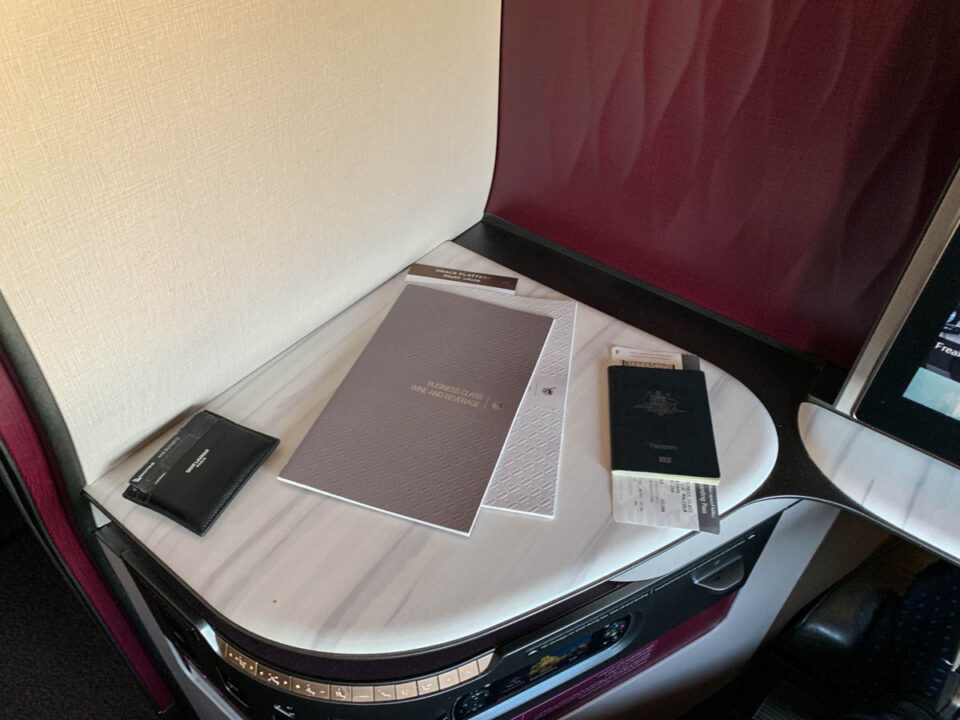 After a massive Christmas my food and wine intake was minimal onboard.

16. Not only do you get a set of The White Company pyjamas, Qatar offer mattresses which takes the bed from good to bloody amazing. This also includes a pillow case cover. Holy sh*t. 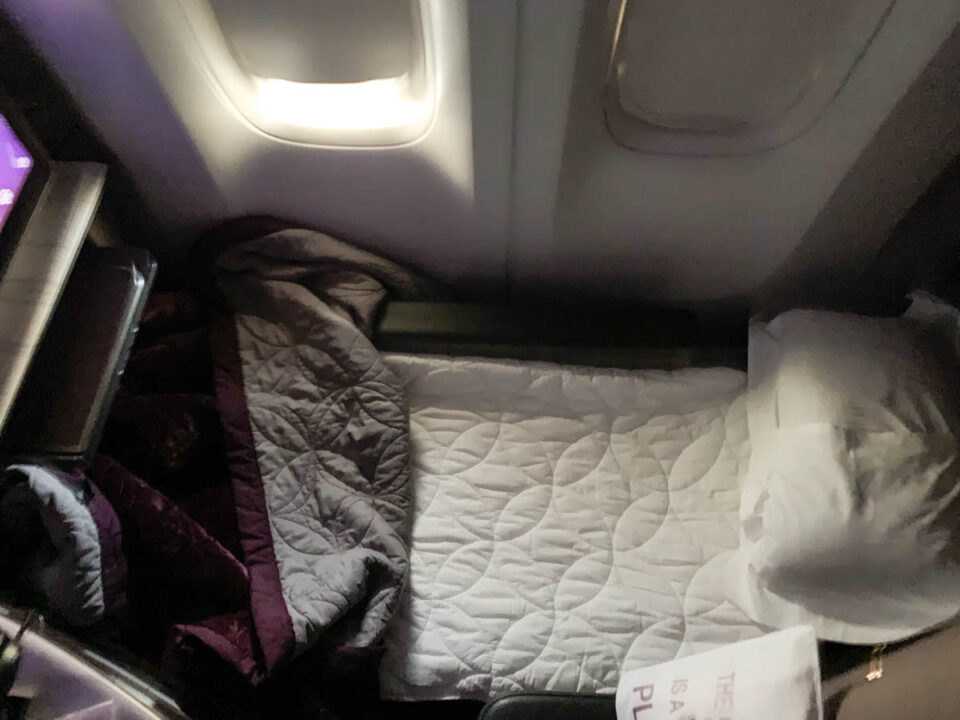 Qatar have thought of everything to ensure you have a good night sleep.

17. The Qatar 777 bathrooms whilst only used sparingly during flight are well appointed. There’s an alarming amount of light to do your make-up or spruce your hair. 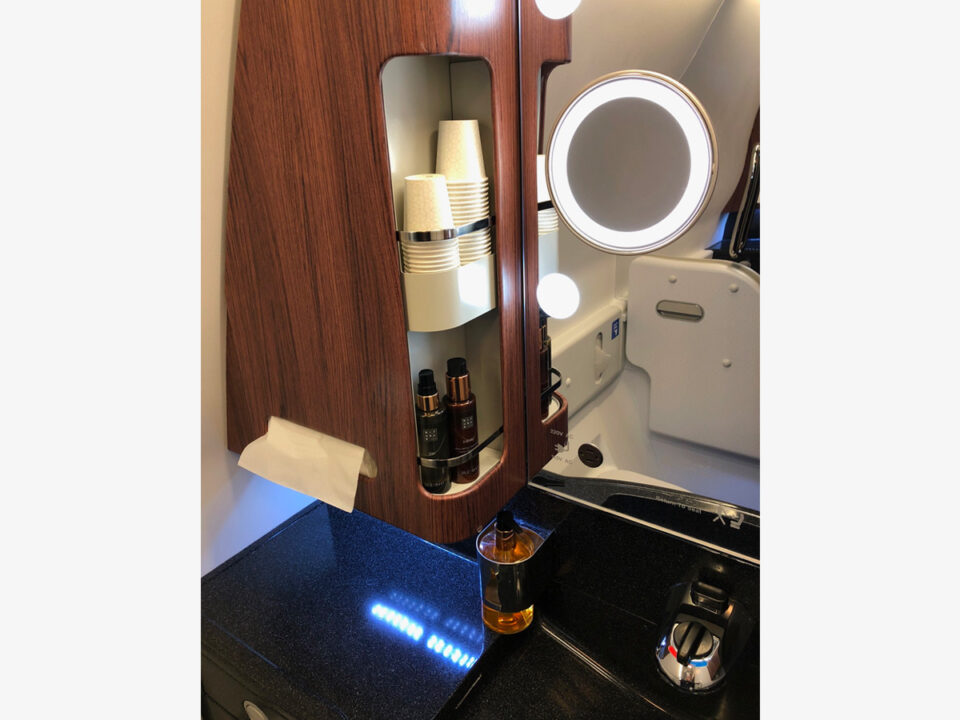 Plenty of space and plenty of amenities to brush your teeth, shave or give yourself a freshen up.

18. Storage for clothing and sneakers was a problem. You can place belongings next to you, however the storage bins in the A380 are quite handy to have. 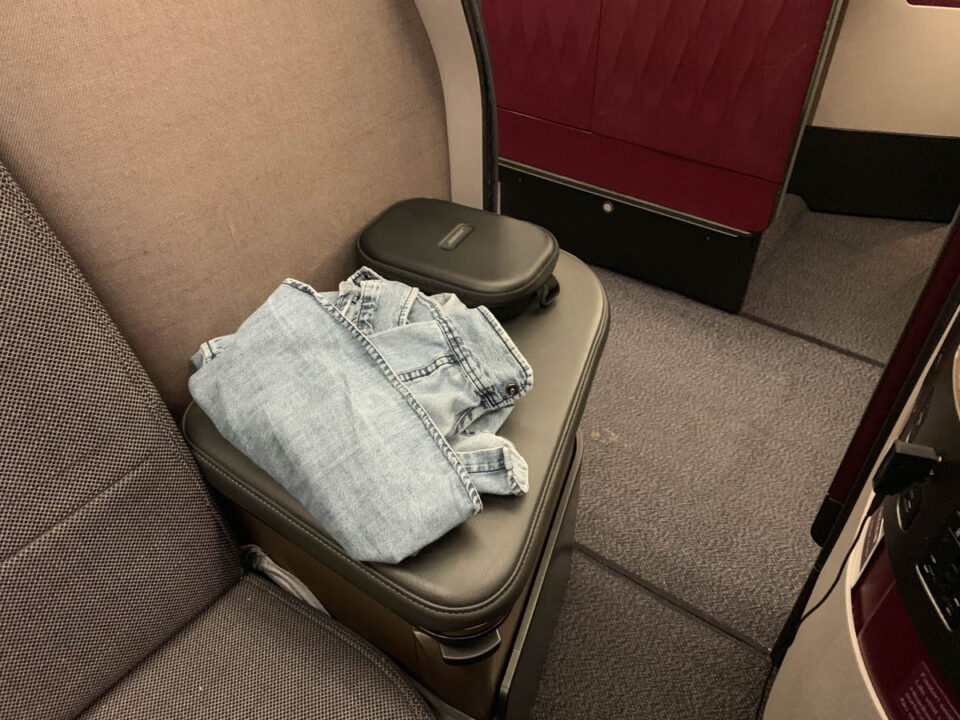 Nowhere to put clothing other than overhead bin

19. The staff are really attentive. Small things like asking how I slept, was everything okay with the bed and seat (it was broken, but let’s ignore that for now) and finally making the effort to find a vacant toilet before landing to get changed. 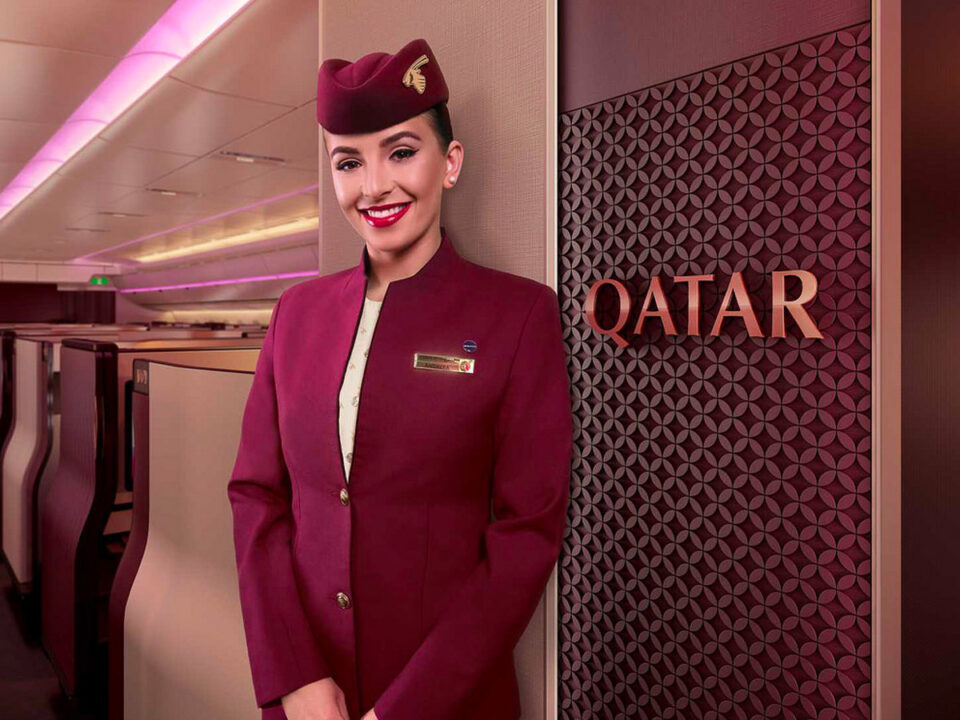 20. Transit in Doha is a breeze and the airport dumps on Abu Dhabi. The Al Mourjan lounge is for business travellers only and free of Oneworld economy travellers with screaming kids. 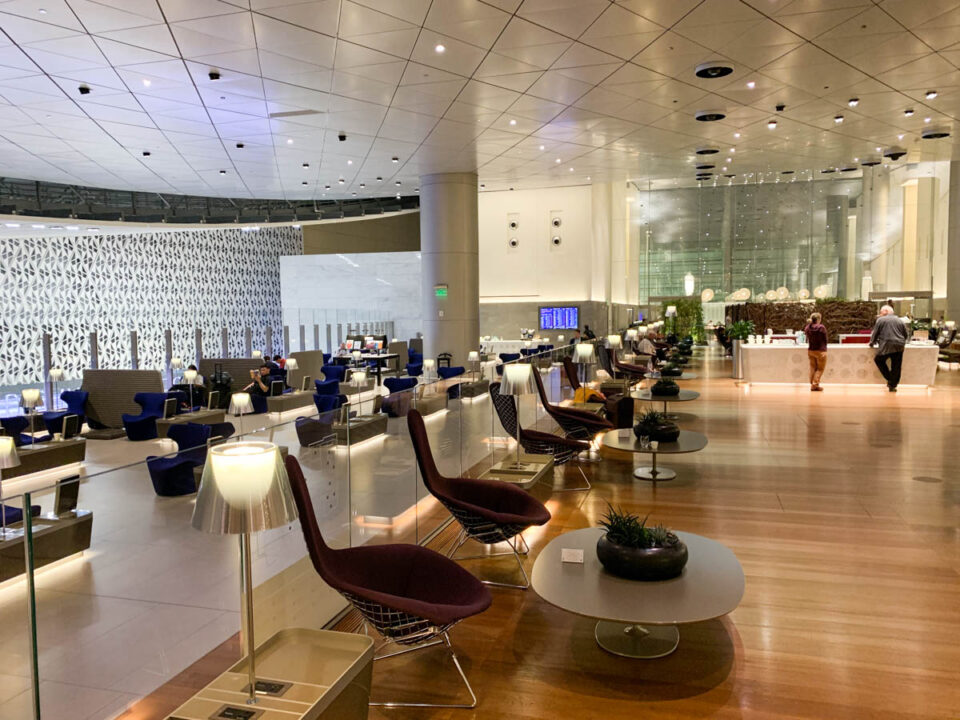 RELATED: How To Get More From Your Qatar A380 Business Class Trip To Europe