Hot tarmac. Clear skies. Trundling suitcases. A bright Sydney afternoon and a prompt 4:30pm takeoff called more for sunglasses than the eye mask and blanket we were provided with on Qatar Airways’ Boeing 777-300ER flight to Doha.

Don’t get me wrong: they were appreciated. But once I dug them out from underneath the seat in front of me, several hours later, they didn’t hold the same appeal. But we’ll get to that. First, let’s set the scene.

Flying economy to Europe, you used to have two options. You either got a cheap red-eye stopping off in Bangkok, Helsinki, Beijing and the Polar North, or you booked a legacy airline that would transport you across the globe in two (relatively) swift bounds.

These days, however, British Airways, Emirates and Qantas are facing some serious competition from the likes of Cathay Pacific, Etihad, Singapore Airlines and Qatar Airways. For this trip, I chose Qatar, flying from Sydney to Doha (on the 777), stopping over for 2 hours, then Doha to Madrid (on the A350-900).

While my expectations were admittedly lower than normal after a series of disastrous domestic Jetstar flights, I was pleasantly surprised by my experience with Qatar’s flagship airline.

That said: not everything was perfect. From meal mix ups (and the garlic-infused feet of the woman who ‘stole’ my exit row seat) to the generous legroom and intuitive entertainment system, this is everything I loved and loathed about Qatar Airways’ economy experience.

1. Qatar’s economy class will surprise you with its amazing legroom

Although I foolishly spent most of the flight with my bag under the seat in front of me (the struggle of having a laptop and wanting to use it), the first thing I noticed was the ample legroom.

While this may have something to do with my recent RyanAir and Jetstar experiences, the fact remains: compared to a budget airline, Qatar Airways’ 777 Economy feels like Business.

Side note: for the Doha to Madrid journey, I was on an Airbus A350-900, which had noticeably less legroom.

I bypassed the long check in queue by checking in online, and strolled up to the “online check in” baggage drop off area. So far so good.

I then waited for my check in attendant to finish her conversation with her supervisor. Just before I got annoyed (alright, I’ll be honest, it was a couple of seconds later) I realised she was a trainee.

I was then offered the chance to change my seat to an exit row. My mildly bruised ego restored itself, and I started stretching my hamstrings and wiggling my toes.

I then got onto the plane only to find she had booked me into the wrong side of the aisle; the woman across from me had lucked into the coveted 25D.

Not content with crushing my ‘extra legroom’ hopes, she then whacked her feet up, sans shoes, for the entirety of the flight.

Side note: I later discovered I had actually been booked into the exit row from from Doha to Madrid, not Sydney to Doha, and all (except the garlic feet) was forgiven…

3. Quick and trouble-free boarding means you get more ‘me’ time

Having recently experienced cancellations, delays and general mayhem from Jetstar, I was so surprised when the fight announcement board switched from “relax” to “boarding now” on time that I barely had time to finish my chicken and avocado toasted sandwich, before rushing to the gate.

4. The questionable seat configuration can be a bit of a lucky dip

Although Qatar’s economy is mostly set up in a 3-3-3 configuration, this turned to 3-4-3 for the front two rows of each section, meaning you hit the jackpot with seats 25D and G (or each partition’s equivalent). For some reason, this bothered me more than the entirety of row 24 (an exit row) having extra legroom (although this might have had something to do with the woman opposite me’s feet).

5. The basic amenity kit came with a not-so-basic and funky lip balm 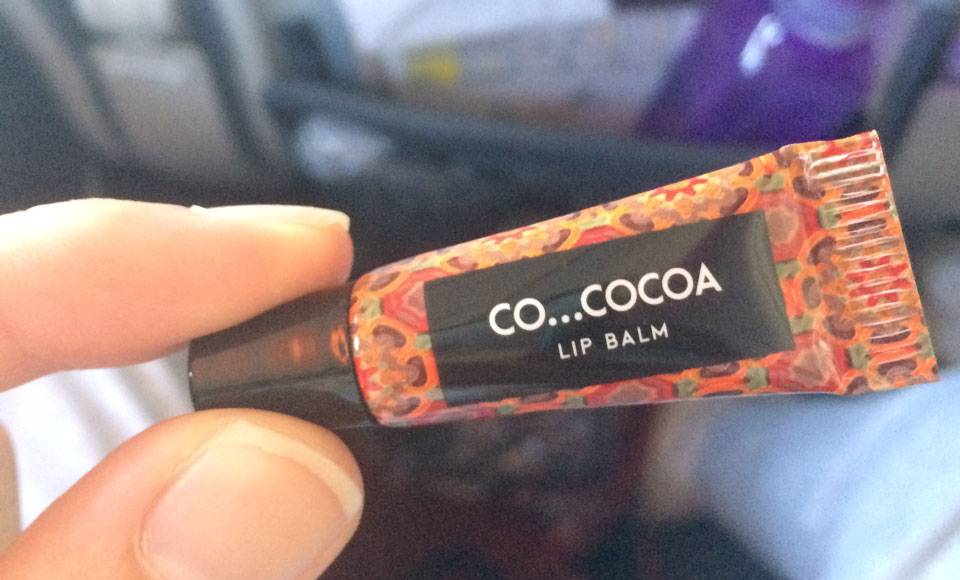 The handy little amenity kit handed out on take-off enhanced the first impression given by Qatar’s trademark blue and orange hues (and legroom). The kit had toothpaste, a toothbrush, an eye mask, earplugs and- differentiating it from the other airlines I have previously flown with – a colourful tube of lip balm.

6. Be warned: you can only pre-select your meals 24 hours prior to flying 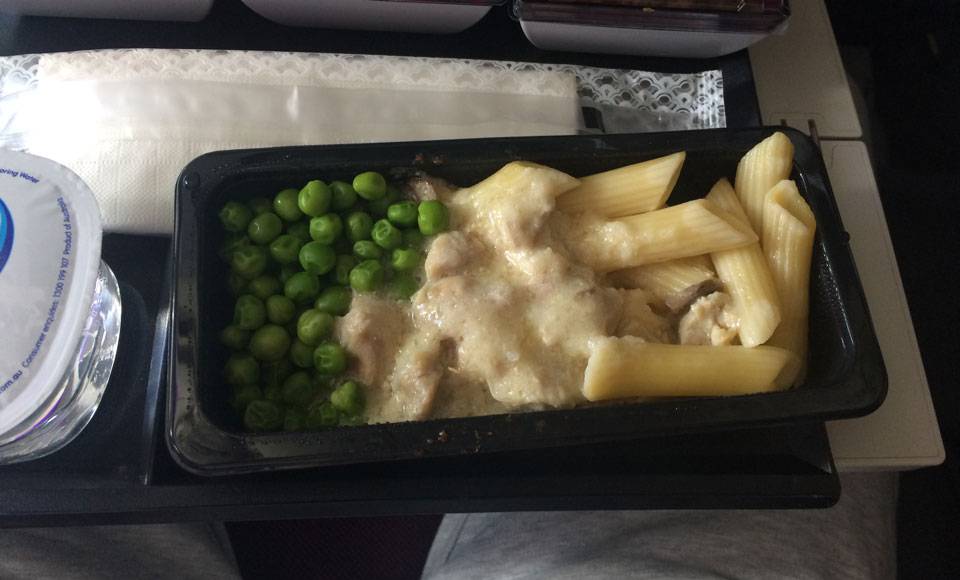 I’m no vegan, but as a cheese averse carb-lover I thought I’d be extra clever by logging into my Qatar Airways account the night before this trip and selecting the vegan option. Unfortunately, as dinner rolled around, I discovered any dietary preferences must be made more than 24 hours in advance.

7. The tactile entertainment screen made for great viewing pleasure 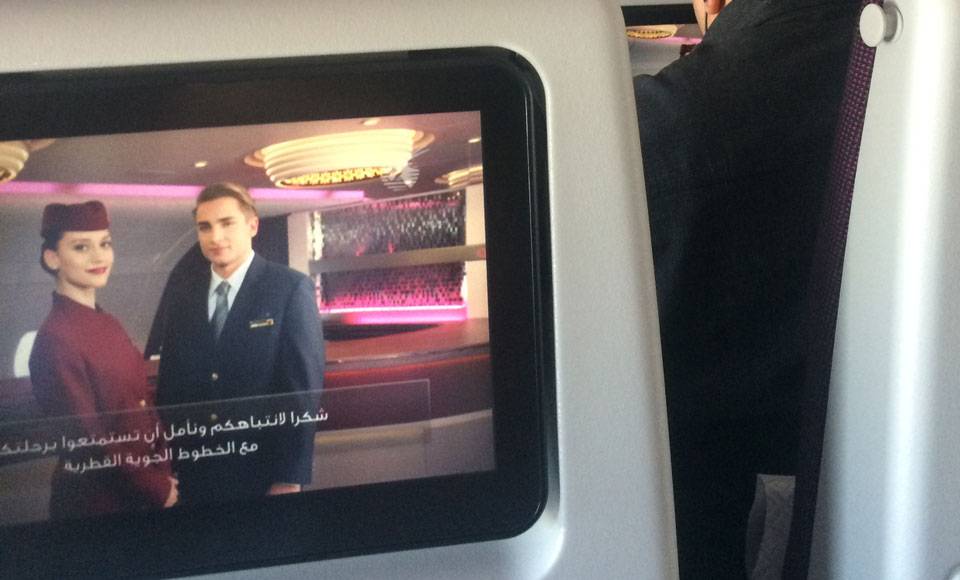 Fortunately for the man in front of me, this is the first airline I’ve ever flown on where I didn’t need to aggressively jab the screen in front of me to get it to respond; a light tap sufficed.

8. Getting just one hour of free Wi-Fi made me feel like I was using free dial-up from 2001 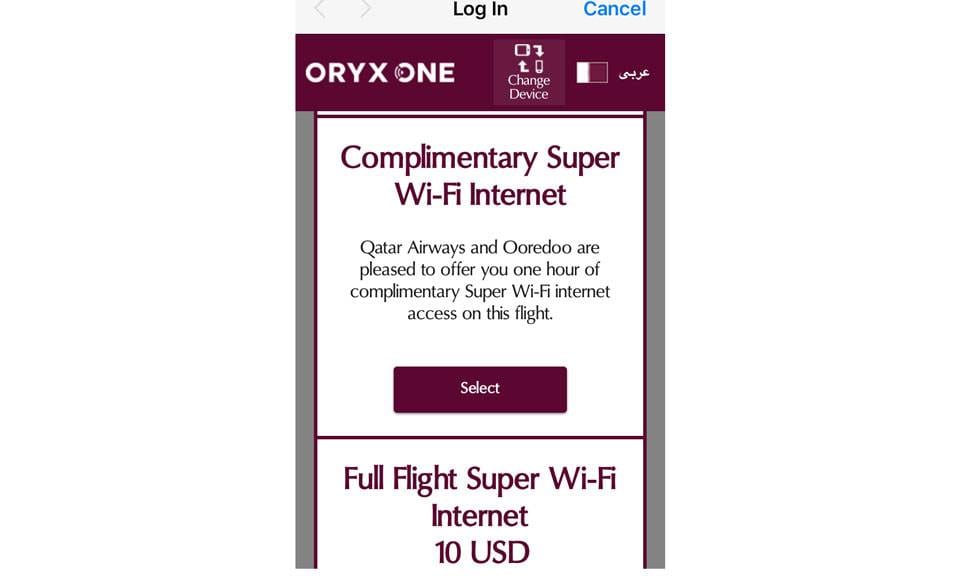 Oh, how times have changed. Just a few years ago, getting any kind of Wi-Fi was a blessing. Now it’s expected, and although you get a complimentary hour, if you want more the only option is to pay $10 US dollars, which entitles you to Wi-Fi for the whole trip (one way to get around this is by having a secondary device, which gets you a second hour for free).

Although we were grateful for the Wi-Fi we got, to stay ahead of their competitors (and so I don’t have to get Instagram withdrawals again) Qatar would do well to introduce a smaller payment option on their 777’s for those who want a second or third hour of Wi-Fi, rather than the current “all or nothing” scheme.

Having said that, by giving a complimentary hour they are still doing better than (or at least; keeping up with) most of the competition. It’s also more than you get on their A350-900 from Doha to Madrid, which gives you just half an hour, and which (in my case) stopped working after 10 minutes.

9. If you listen closely you can live vicariously through the flight attendants

I loved eavesdropping on the flight attendants’ dating gossip, as they talked about having a port in each call and breaking up with the clingy ones on Valentine’s day.

On a serious note: they were very friendly, professional, spoke more languages than a multi-tongued Oxford dictionary, and switched between them with ease. I didn’t ask them about their next hookup though.

10. Doha Airport is wildly underwhelming when compared to Dubai Airport 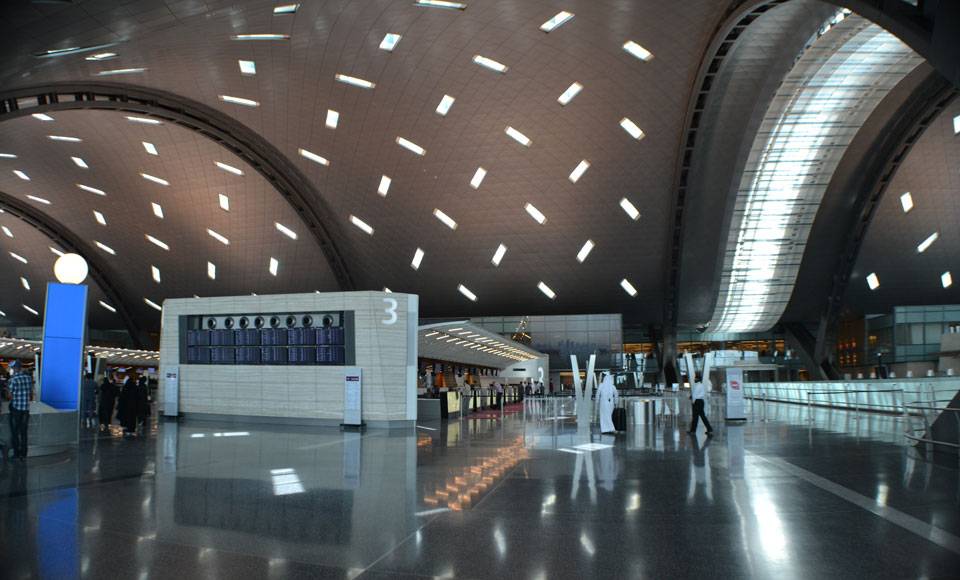 Considering the inflight experience was on par with Emirates, I landed in Doha half expecting the same exotic “bright and breezy” feel you get in Dubai. However the airport experience was a little flat, and we had to take both a train and a bus to get to our next flight.

11. Great movie selection with the exception of one thing…

From surfing documentaries to Hollywood blockbusters, Ted Talks and dry BBC comedies, Qatar Airways’ Economy had a wide variety of entertainment on offer. The only feature they lacked (which their competitor Emirates has access to) is live Premiere League football…

They were not automatic like some other airlines’ have. And definitely not for the germaphobe.

13. How good was the ambient temperature though?

Although it dried my mouth out, that comes with the territory of flying. Apart from that, the air-conditioning gets 5 stars from me – not lacklustre, but not freezing us in our sleep.

14. You’ll be  served beef pies in the middle of the night

I’m pretty much always down for a meat pie, but when you’re desperately trying to get some sleep, after having only had dinner a few hours ago, this moment is not one of them.

15. Cleanliness was surprisingly good throughout

I’ve been on a few double pronged journeys where the second leg has clearly only been given a cursory clean. However, both legs of this trip started in immaculately clean planes: spotless chair pockets, sparkling bathroom (that was evidently cleaned multiple times throughout the journey). Two thumbs up.

16. For the unprepared (me), you’ll need to buy headphone adaptors 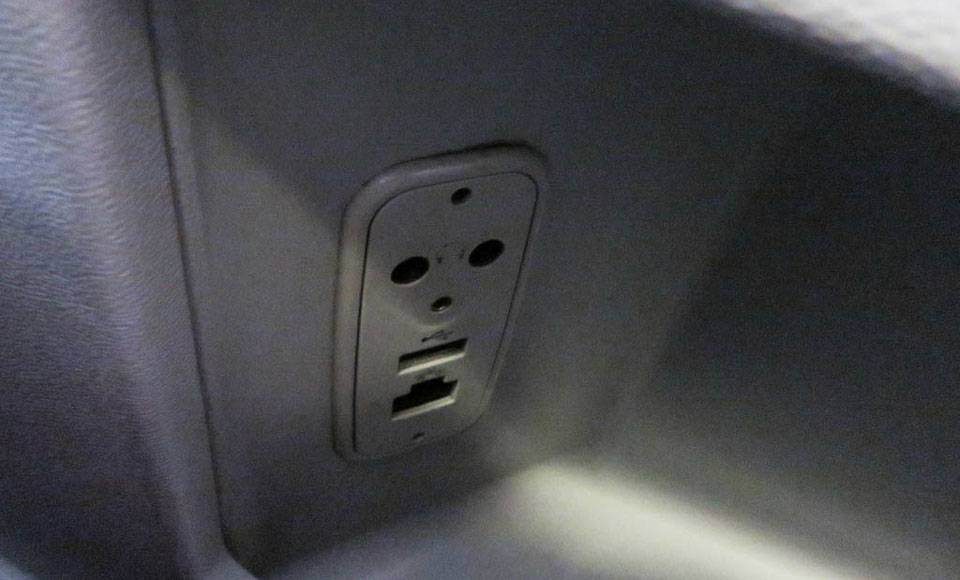 Although my partner’s Bose headphones seemed to work fine by inserting their single prong into one of the two holes provided (designed for the double pronged, cheap, complimentary headphones), my personal in-ear headphones only worked in one ear, and if the jack was nudged, it gave me a lot of static.

Although most airports sell ‘single to double’ prong adaptors, I look forward to the day when an airline designs its headphone jacks so that travellers can easily use their own products.

17. I was saved by the USB charger

No one wants a dead phone. Or you can use it to charge your wireless headphones. Enough said.

18. Armrest battles can be tiring

Who owns the armrest, really? Whoever can subtly wheedle the other one’s arm off it, right? These guys are right up there with those who change the direction of the reading light and those that change the air flow of your air-con nozzle.

Seasonal fruit is nice, but have you ever sunk your gleaming whites into a sweet hunk of chocolate? We did and found love at 10,000 feet. Also, the vegetarian pastries weren’t too shabby.

20. You’ll memorise the safety demonstration video after the watching it for the trillionth time

Forget the Koran: after flying to Europe a couple of times I can now recite the generic “Airline Safety Spiel” in Arabic, French, Spanish, English and Mandarin, word for word. Although this is not exclusive to Qatar (every airline is legally obliged to do this), just when I thought I’d got away with one, on the Doha-Madrid leg, where I had scored the exit row, the flight attendants pulled the TV out of my armrest for me and plonked it in front of my face, 1984 style.

Yes. Online check-in is available for most Qatar Airways operated flights departing from Melbourne, as well as most airports in Asia, Europe and the Middle East.

Can I upgrade/downgrade my Qatar Airways’ lounge access pass?