Most are content with a king bed and a corner room. Throw in a free breakfast and you’re in 5-star territory. But for a certain class of discerning guest, a successful hotel stay requires a concierge to go above and beyond the standard call of duty.

The Points Guy rounded-up some of the most ridiculous hotel guest requests ever recorded, from bizarre baths to extinct reptiles to framed celebrity photos. Check out some of our favourites below. 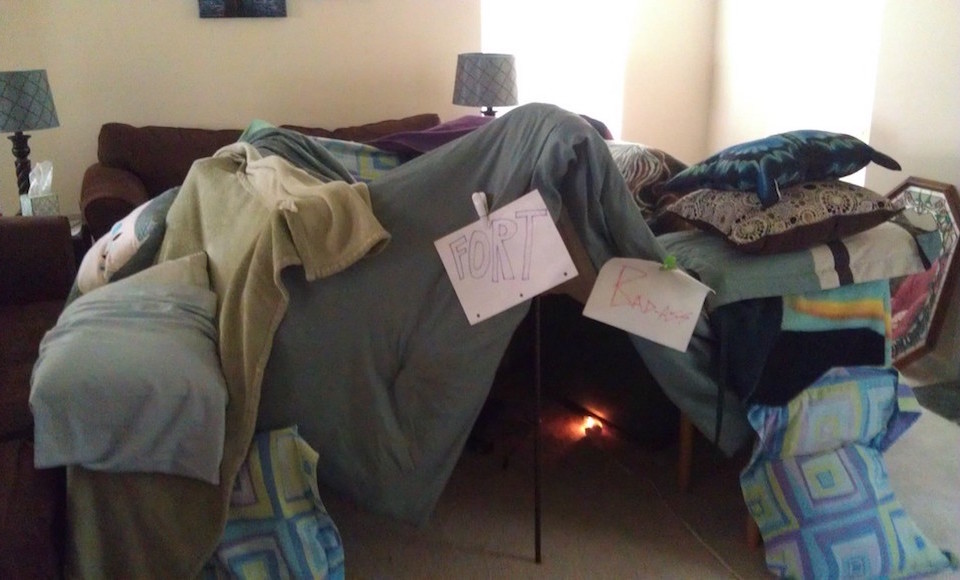 Denver-based businessman Sean Fitzsimons is something of an artiste when it comes to hotel guest requests. His successful demands include a pillow fort, an image of Grandma Winslow from Family Matters, and three pictures of Donald Trump looking confused. So far his only regret was asking the staff to draw a picture of what they thought he looked like. “It got so awkward,” he said. “I’m pretty sure I weirded her out. So, I was like, ‘I can’t ever come back here again.’”

A Bathtub Of Goat’s Milk 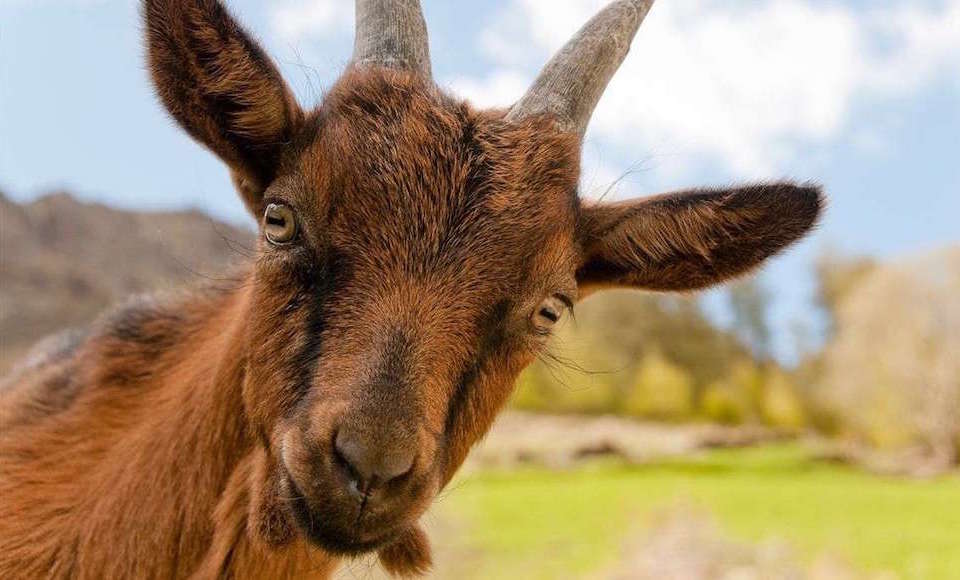 Legend has it that bathing in virgin blood is the magical secret to maintaining a youthful appearance. We don’t recall any similar legends about wild goat’s milk, yet that’s exactly what one guest requested from Sean Davoren, head butler at The Savoy in London. The milk itself cost around US$75, but because it had to be sourced from Wales and transported via taxi, the final cost clocked in around US$800. It then took 30 bottles of heated Evian water to wash the goat’s milk bath off the customer.

A Photo Of Nicolas Cage From Con Air 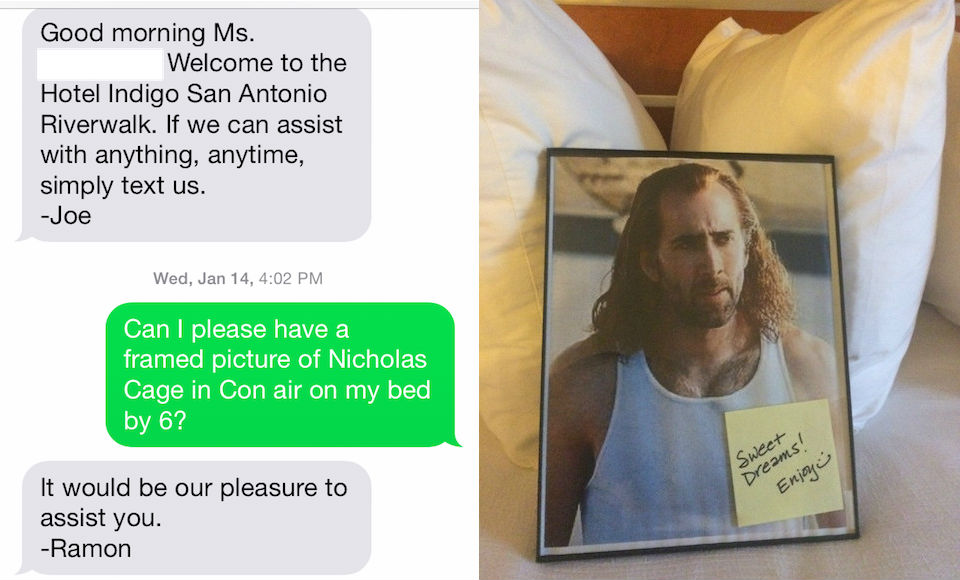 In 2015, a visitor to San Antonio, Texas posted images of an amusing exchange with her hotel’s concierge. “I had the funniest hotel concierge EVER during a boring business trip,” she said. “Thank you so much, Ramon!” Ramon is indeed a hospitality legend in the making. Not only did he fulfill her original request for a framed image of Nic Cage in Con Air, he and his fellow staffers fulfilled two more requests to Cageify the room, and ended her stay with a final, unrequested Cageification.

A Towel Folded In The Shape Of An Elephant 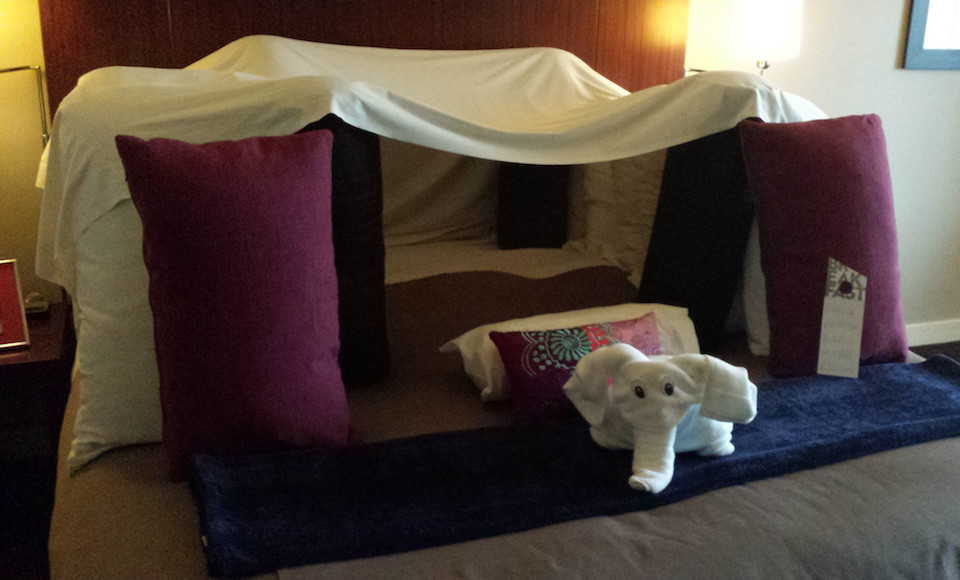 The staff of the W Seattle will never forget this pachydermic request: “Please build a pillow fort on our bed with 5 additional pillows. We would also appreciate a towel folded into the shape of an elephant. If possible, we would enjoy a sexy picture of some fruit on the night table.” The W nailed the fort and the elephant. No word on the sexy fruit. 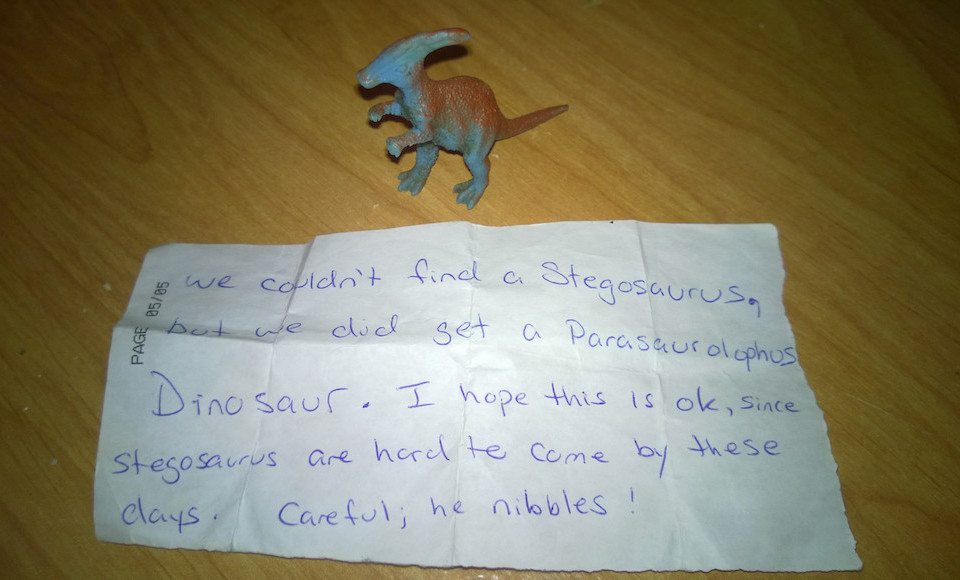 In August of 2011, redditor jiggernauts attended a wedding in Ontario, Canada. When booking accommodations at the Monte Carlo Inn, he made an unusual appeal in the “Special Requests” section of his online reservation: “Can I please have a baby Stegosaurus in my room? I will bring the food and water, and I will take care of him. Thanks.” Though dinos are a scarce resource in 21st century Canada, the Monte Carlo came through with the little guy above. 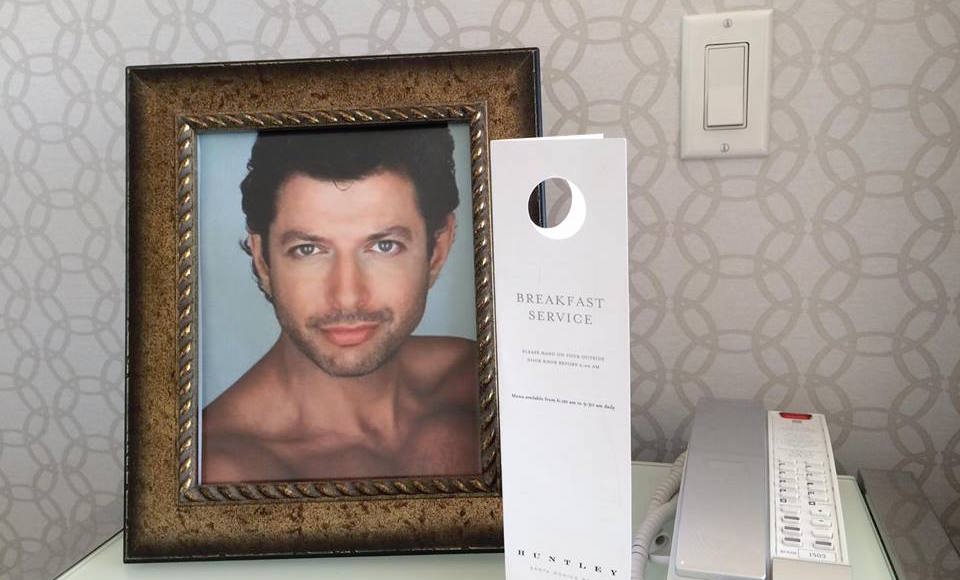 Seth Freedland and his girlfriend Amy Marsh undoubtedly made the days of the staff at Huntley Hotel in Santa Monica, California, when they asked for their room to be filled with photos of Jeff Goldblum. “Jeff Goldblum is my girlfriend’s celebrity crush,” Freedland told The Huffington Post. “Specifically, she’s a big fan of Independence Day-era ‘heroic Goldblum.’ I’m more a Big Chill Goldblum man myself, but you really can’t go wrong.” Sure enough, the hotel complied with the snaps and the story went viral.

RELATED: 10 Outrageous Requests Celebrities Have Made On Private Jets