Rafael Nadal has made tennis history. The 35-year-old Spaniard came back from two sets down in the 2022 Australian Open men’s singles final last night to defeat Russian Daniil Medvedev in a gruelling five-set, five-and-a-half-hour match.

The win has edged Nadal ahead of fierce rivals Novak Djokovic and Roger Federer to a grand total of 21 Grand Slam men’s singles titles – an all-time record. It’s truly a momentous occasion… But the only thing more impressive (well, almost more impressive) than Nadal’s win has been Federer’s extremely classy reaction to it.

The 40-year-old Swiss champ was quick to celebrate Nadal on Instagram, penning a lengthy and generous congratulations. 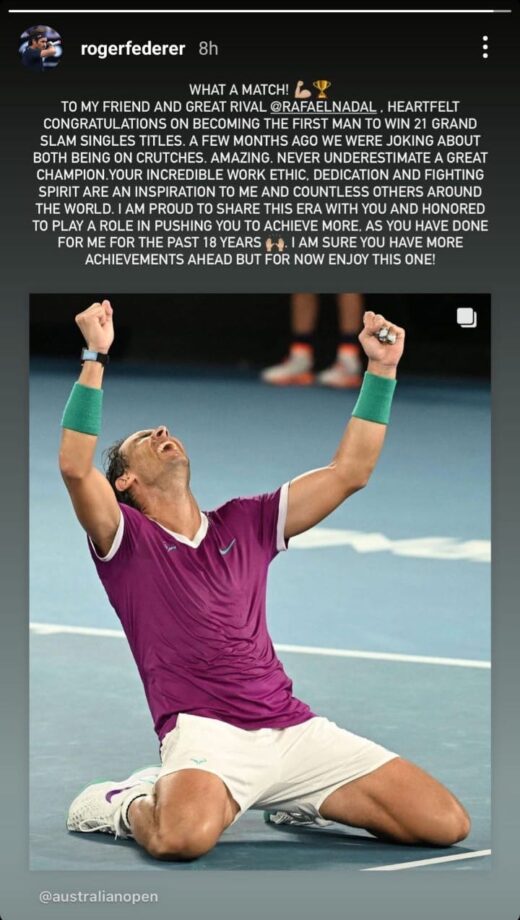 “What a match! To my friend and great rival… Heartfelt congratulations on becoming the first man to win 21 Grand Slam singles titles. A few months ago we were joking about both being on crutches. Amazing. Never underestimate a great champion.”

“Your incredible work ethic, dedication and fighting spirit are an inspiration to me and countless others around the world. I am proud to share this era with you and honoured to play a role in pushing you to achieve more, as you have done for me for the past 18 years. I am sure you have more achievements ahead but for now enjoy this one!”

That point about “both being on crutches” is particularly salient. Both Nadal and Federer (but particularly Federer) have both faced criticism in recent years that they’re getting a bit too old, and both have struggled through serious injuries over the last twelve months. Nadal’s triumph in Melbourne yesterday suggests there’s still plenty of game in him yet – which should also buoy Federer.

Nadal’s other big rival, Novak Djokovic – who was conspicuously absent from the 2022 Australian Open thanks to his whole visa debacle – also graciously celebrated Nadal’s landmark victory with an Instagram post.

“There has been some outstanding tennis played at this year’s Australian Open and the finals were exceptional… Congratulations to Rafael Nadal for 21st GS. Amazing achievement. Always impressive fighting spirit that prevailed another time. Enhorabuena [Spanish for ‘congratulations’],” the Serbian posted.

Federer and Djokovic’s absence at the Aus Open was keenly felt, so it’ll be interesting to see the ‘Big Three’ at a Grand Slam tournament together now that Nadal’s on top. The next Grand Slam on the calendar is the French Open on the 22nd of May – traditionally one of Nadal’s strongest tournaments (there’s a reason they call him the ‘King of Clay’).

Federer has expressed hopes to make a return to the tour in 2022, but question marks still remain around his overall recovery. As for Djokovic, the only thing stopping him from competing at Roland Garros is his vaccination status…