Visit Seoul and you’ll see all of the above – but there’s so much more to Asia’s new capital of cool.

The city has a thriving culinary scene, luxurious public baths, and the world’s fastest internet. It’s home to night markets, tea houses, neon-lit karaoke joints, and idyllic urban parks. Traditional architecture intermingles with cutting-edge skyscrapers, a seamless blend of old and new that encapsulates what Seoul is all about.

Seoul is a city forging daringly towards the future while faithfully paying homage to its past. There’s always something to do, see, eat, or drink in this multifaceted metropolis. Should you have the good fortune to experience it, these D’Marge-approved hotels will let you rest your head in style. 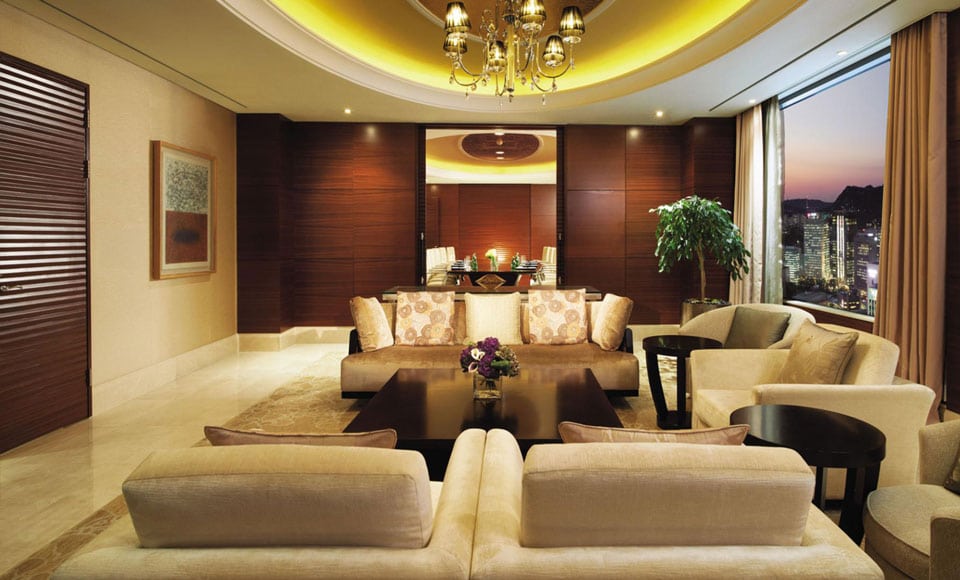 Lotte Hotel offers some of South Korea’s most lauded lodgings. Conveniently located in the CBD, the hotel is a short jaunt from popular tourist stops including Gyeongbokgung Palace and the Myeongdong shopping district. But that’s if you can tear yourself away from the property. It’s a taller order than you might think, considering Lotte Hotel contains a spa, fitness centre, swimming pool, hair salon, shops, laundry service, business facilities, more than half a dozen dining and drinking options, and its own golf range. 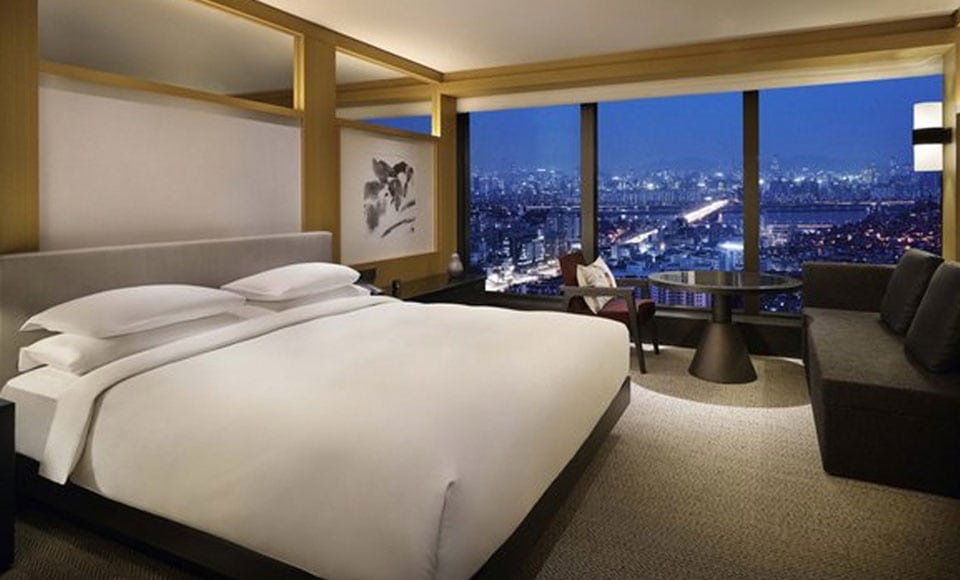 A stay at the Grand Hyatt Seoul lives up to its name. It is grand indeed in both size and scope, with over 600 rooms set in the sprawling green oasis of Mount Namsan. Put on your Wimbledon whites and hit one of the hotel’s three tennis courts, then unwind with a traditional Korean massage at the spa. Depending on the season of your visit, you’ll also want to pig out at a poolside barbecue or lace up your blades and attempt a triple Axel on the ice skating rink. 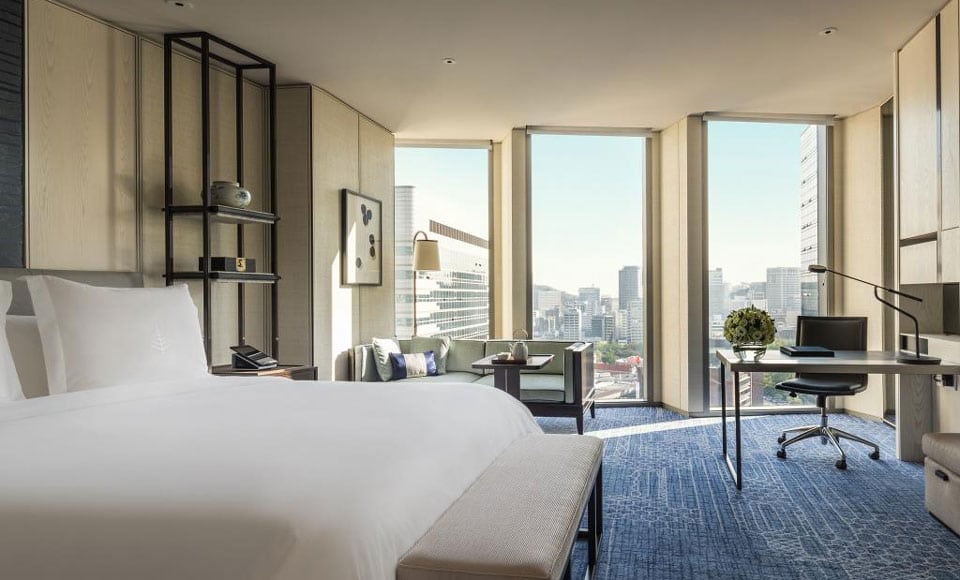 This sophisticated addition to the Seoul accommodations scene opened in 2015. The Four Seasons Hotel exudes calming, grown-up vibes with a minimalist design ethos and floor-to-ceiling windows that flood the space with natural light. It’s a place to escape hectic city life while simultaneously immersing yourself in local culture (courtesy of an extensive collection of contemporary Korean art and pottery). Venture to the lower level and find the hidden door to gain entry to Charles H, a speakeasy serving some of the city’s finest cocktails. 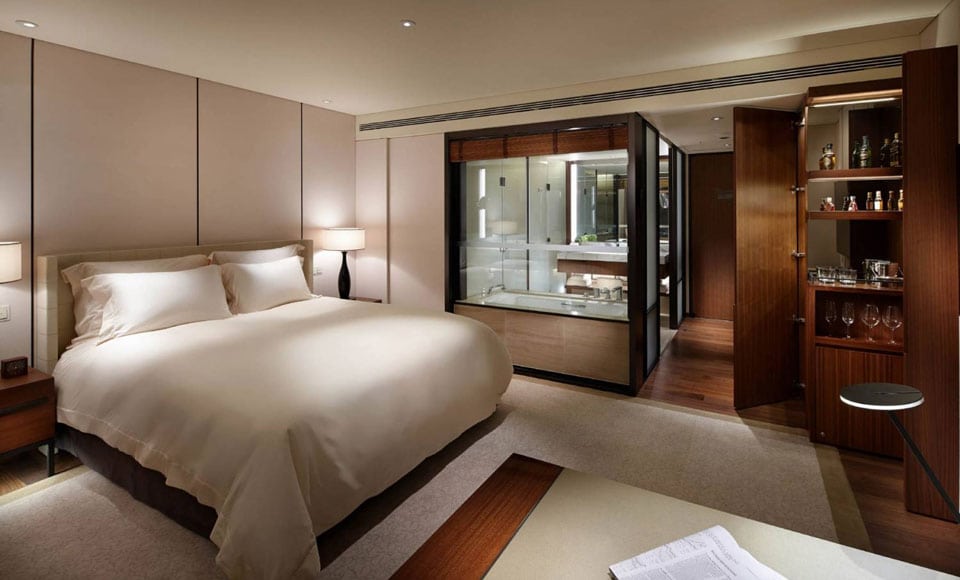 The Shilla landed in Seoul in the 1970s. At a time when there were few high-end hotels in the city, it quickly rose to the top of the crop. Today it retains elite status by embracing the heritage of its homeland. The ondol-style Korean Suite immerses guests in traditional Korean architecture and interior design, while La Yeon restaurant dishes out upscale Korean cuisine that has been awarded three Michelin stars. A notable departure from the local theme is the Guerlain Spa, the Parisian cosmetic house’s first in Asia. 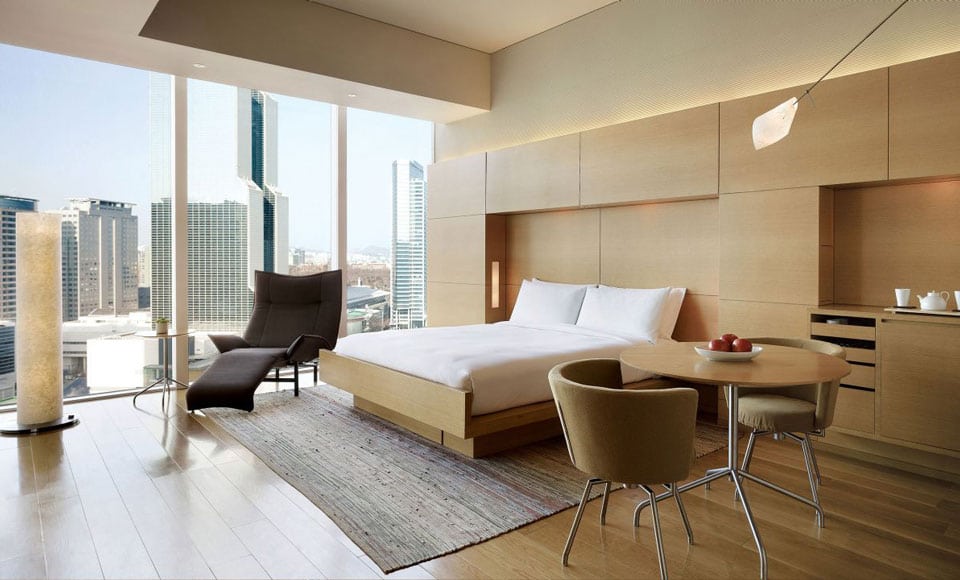 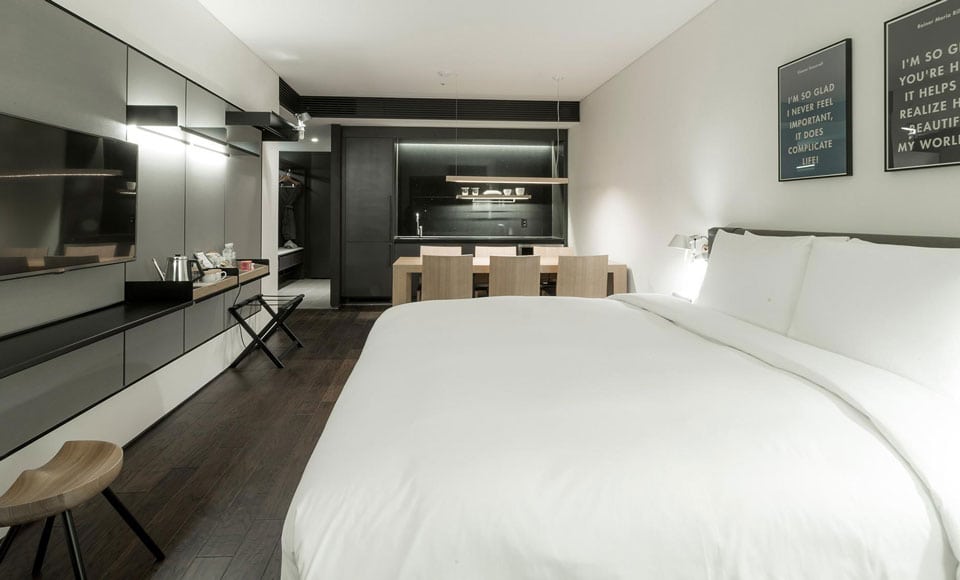 It’s easy to spot GLAD Hotel Yeouido. Its neighbours in Seoul’s business district are glittering and glassy, their modernist facades erupting confidently skyward. Glad Hotel Yeouido, with its modest brick exterior, sticks out – for all the right reasons. The brick motif continues inside, adding wit and warmth to the space. Room amenities cater to the business traveller, including Bluetooth speakers, espresso machines, lightning-fast Wi-Fi and Aesop toiletries. The single malt whisky bar provides a relaxing end to a long day at a conference. 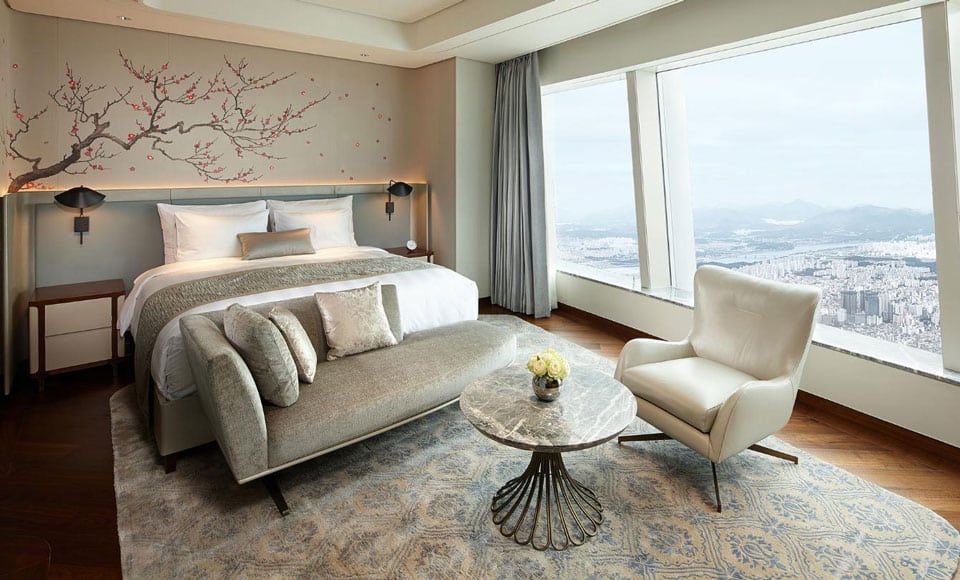 If nothing gets you off like a good view, Signiel Seoul is your must-stay in South Korea. You’ll find the hotel occupying floors 76 through 101 of the Lotte World Tower, currently the world’s sixth tallest skyscraper, overlooking Seoul’s majestic sprawl and mountainous Bukhansan National Park. The hotel is also home to the largest champagne bar in the country, an Evian Spa, and the exceptional food of three Michelin-starred French chef Yannick Alléno. 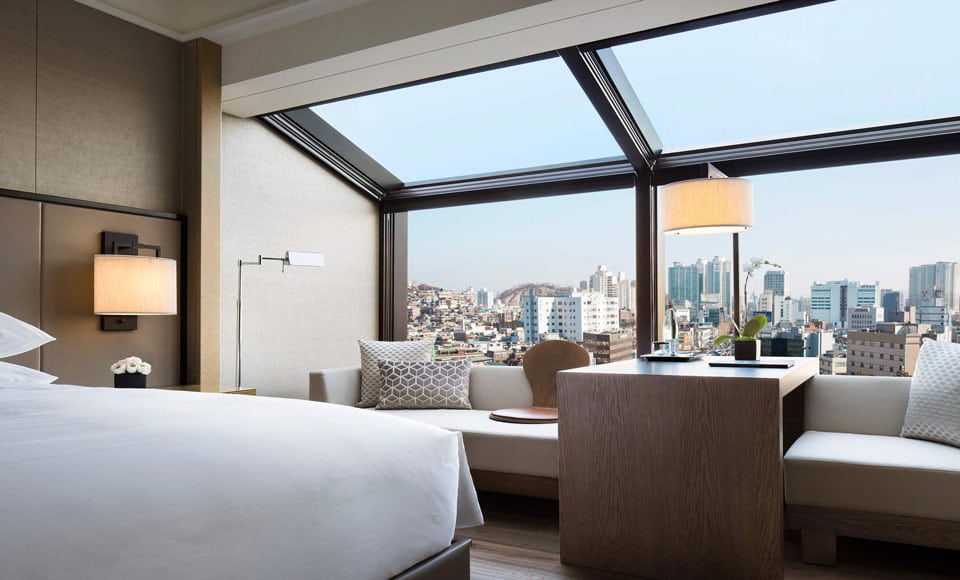 Not to be confused with the JW Marriott Seoul, the JW Marriott Dongdaemun Square is a more recent addition to Seoul’s hospitality scene located in the city’s flashy shopping district. The space is well designed in neutral tones with a contemporary aesthetic, plus plenty of marble for that luxury feel. Eco-minded travellers will be pleased to hear it is the first hotel in Seoul to be awarded the LEED Gold certification recognising sustainability achievement. 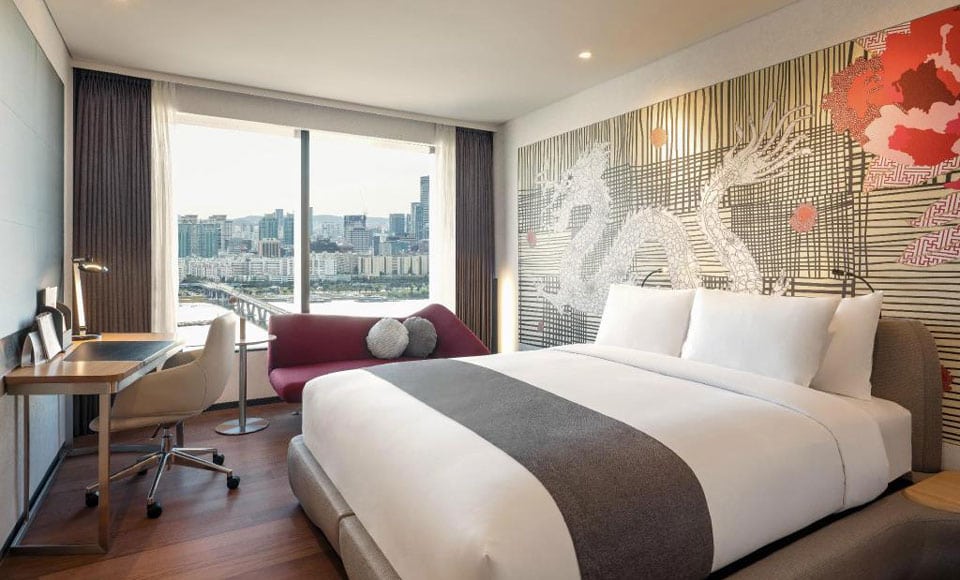 Novotel Suites Ambassador Seoul Yongsan is an ideal home base for long-stay guests. Each room is equipped with a washer, dryer, refrigerator and microwave oven. The property offers free Wi-Fi in all rooms, 24-hour room service, daily housekeeping, laundry service, and currency exchange. Facilities include a fitness centre, sauna, spa, and indoor pool, plus a variety of dining and entertainment options in the Sky Kingdom area of the Seoul Dragon City complex. 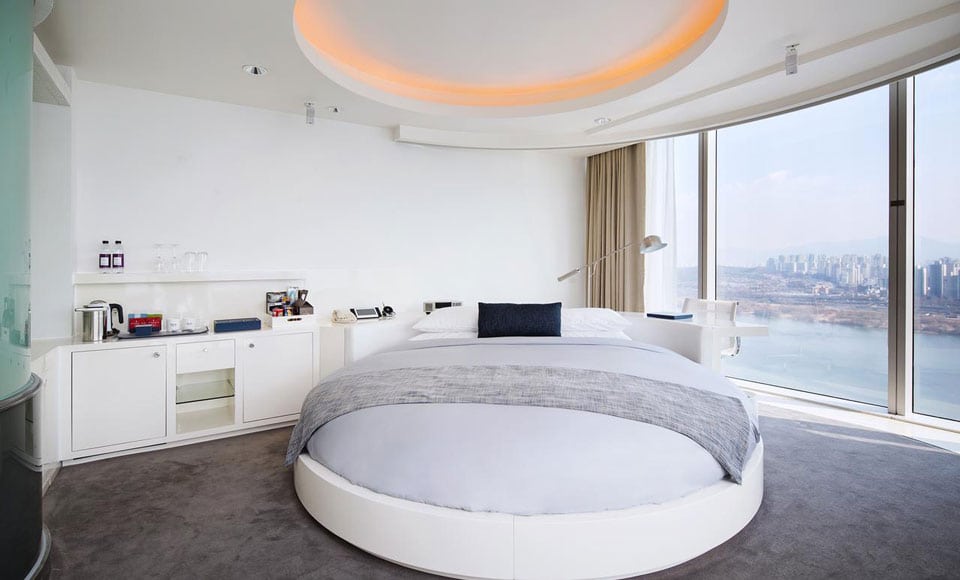 Vista Walkerhill was designed with sensory indulgence in mind. The 252-room hotel’s all-glass facade brings space-age energy to its serene surroundings – the slopes of Mount Achasan and the Han River. That same harmonious blend of man and nature is felt throughout, from the 800-year-old olive tree in the lobby, brought in from Sicily by world-renowned “plant hunter” Seijun Nishihata, to a digital art piece projection mapped on the ceiling above. Other highlights include the 4th-floor outdoor botanical garden, a virtual reality play zone, and a library stocked with 3000 international books.