It’s that time again where we trek across the globe to Geneva to bring you the latest from the world’s most prestigious and loved luxury brands.

In addition to the world’s biggest names you’ll see some of the coolest independent watch companies showcasing their weird and wonderful timepieces for 2017.

It’s four days of pure madness set in the yellow hues of Palexpo in Geneva, Switzerland. The good thing is you can get all the latest news from the comfort of your own home while we brace the European winter. 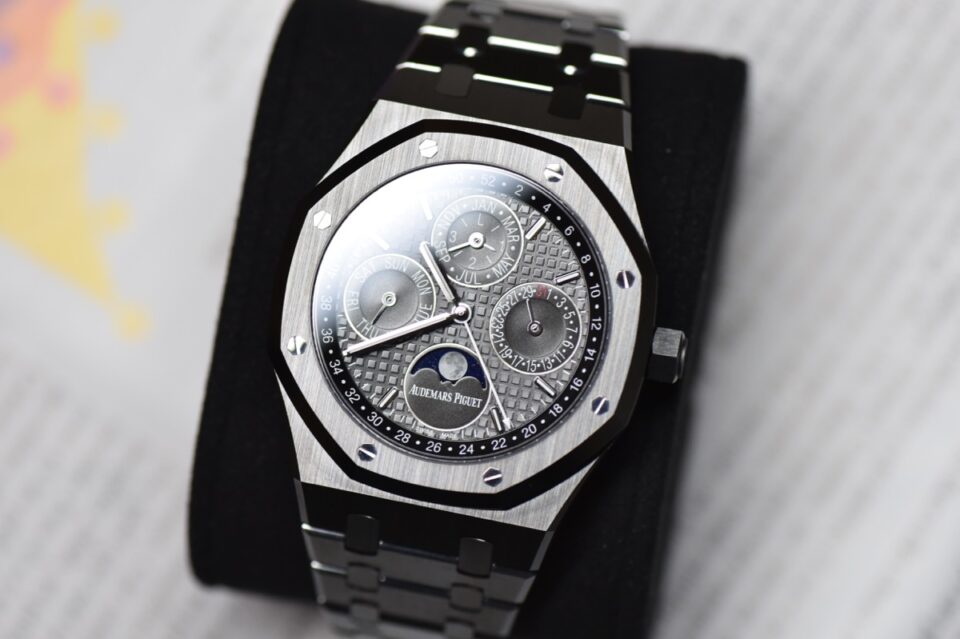 Following the trend of all black watches, AP have released the Audemars Piguet Royal Oak Perpetual Calendar. It’s all ceramic construction means it weighs almost nothing (yes, we tried it on). Requiring over 600 hours to develop and perfect, the AP RO Ceramic is truely a remarkable timepiece.

This year Cartier have focused more on women’s jewellery and watches rather than men’s, however two new references of the Drive De Cartier were released. 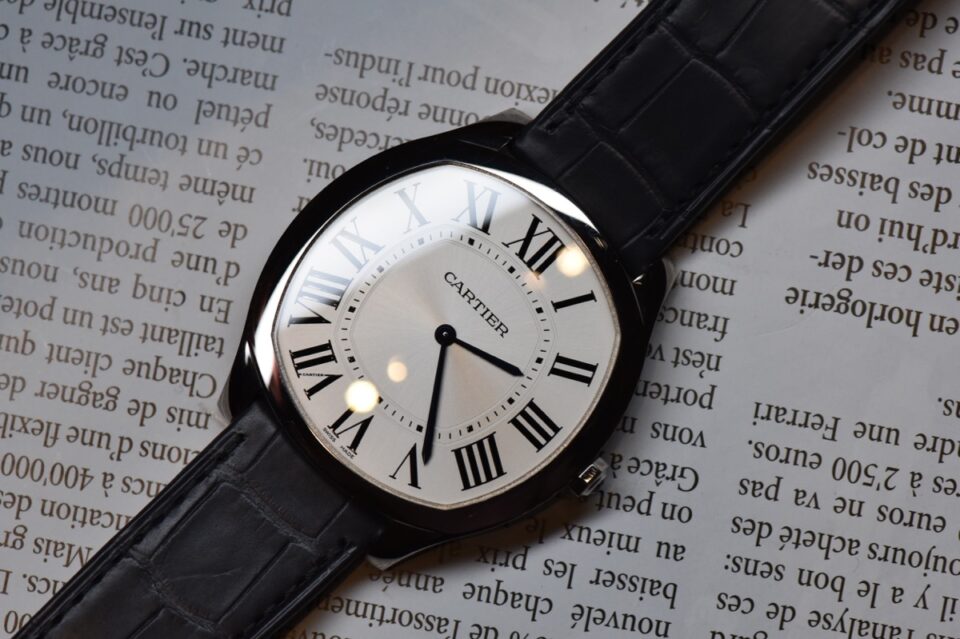 The Drive D Cartier is in our top five watch releases of SIHH 2017. It’s already elegant design has been streamlined that little bit more, with its width now only 7mm. The Drive De Cartier Extra Flat comes in pink and white gold, with the white gold edition really getting our attention with the grey crocodile strap. Superb. 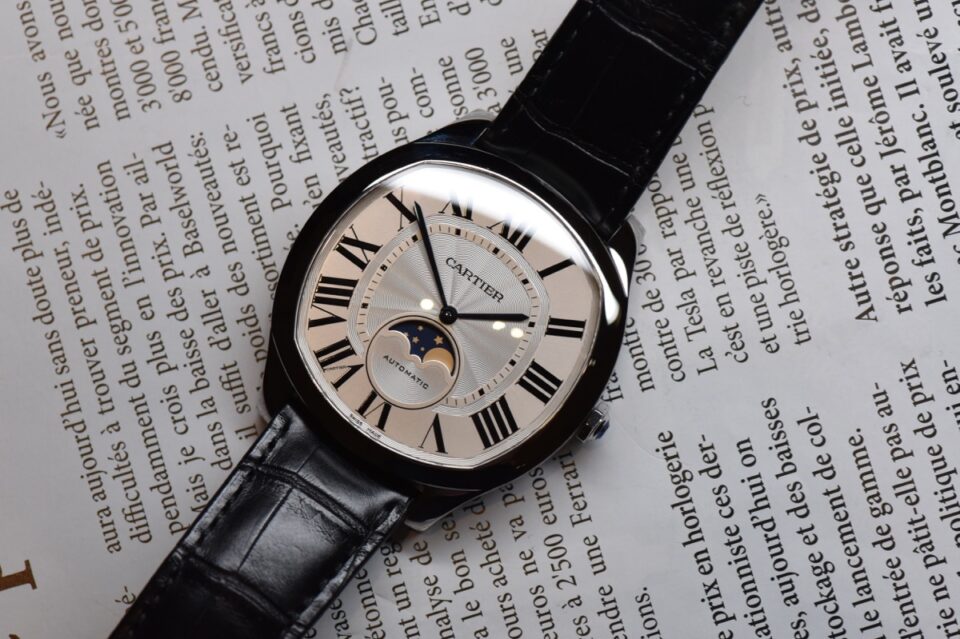 If you’re partial to moon phase watches then you’ll appreciate the next evolution of the Drive De Cartier. This model comes in pink gold and a more affordable steel version. The moon phases gives the watch a touch more character and makes for a more interesting dial.

This year’s fair has been somewhat void of ‘wow factor’ pieces. That was until we dropped into Panerai. Three standout pieces, all Luminors, an Amercia’s Cup edition, new Submersibles and something epic (and carbon) with a 50 year warranty.

Panerai have pulled off a major upset and secured the defending champions, Team Oracle USA as well as Team Softbank Japan, as watch partners for the upcoming America’s Cup in Bermuda. Whilst the collection offers five variations, the Luminor 1950 Team Oracle USA 3 Days Chrono Flyback Automatic is the standout. Set in a 44mm ceramic case with black dial and white, red and blue indicators, it’s the ultimate watch for the sailing enthusiast. It features Panerai’s P.9000 movement with the flyback function to allow the user to set a countdown of up to 15 minutes.

Hands down my favourite watch of SIHH 2017 is the Luminor Submersible 1950 3 Days which combines red gold and ceramic in a smaller 42mm case. This watch just screams refinement and baller cool. Few will be able to afford this 250 piece limited edition, but it’s a Panerai which will no doubt become an icon.

It’s water resistant to 30 meters, so even with its fanciness it’s still a certified professional dive watch. Expect to pay about AU$33,000 for this one when it arrives down under.

If you want a watch that weighs almost nothing and will likely outlive you, then the Panerai Luminor Lab-ID Carbotech 3 Days is the watch you want. Set in a massive 49mm case, this beast is made from machined carbon fibre so each watch has completely its own unique finish.  The blue luminescent numbers light up like a Christmas tree when exposed to darkness. Panerai have also designed the movement to require zero lubrication. Because of this engineering feat, they are offering a whopping 50 year warranty with it. Yes – 50 years!

I’m somewhat of a virgin to the Girard Perregaux brand and this year’s fair has been my first closeup at this 225 year old business. What’s most interesting for us is their focus on just one family of watches, the Laureato.

The Laureato is contemporary and sleek line that we think will do well. The range does take some visual cues from other watches in the market, but regardless this does feel like its own self.

The Laureato will come in four materials: stainless, pink gold, white gold and titanium. It will also offer four sizes in 34mm, 42mm, 44mm and 45mm cases. Two movements will be available, both automatic with an additional quartz movement for the ladies.

Finally there will be bracelets and leather straps with an optional rubber strap for the leather versions.

Something more refined and suitable for the global traveller is the Girard-Perregaux WW.TC. This cool 40mm world timer features two time zones with cities marked around the bezel. Featuring GP’s unique dual crown system, the left hand crowd alters the timezones, while the right sets the time. The WW.TC comes in stainless steel and rose gold, on both bracelet and alligator straps. 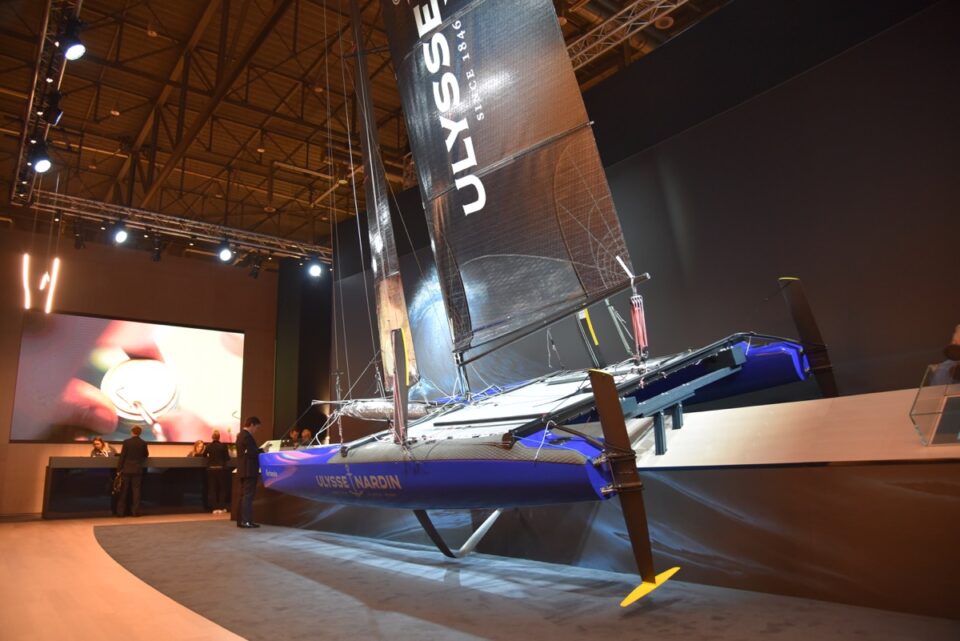 New for SIHH this year is the representation of Swiss brand, Ulysse Nardin. We had previously caught up with their CEO Patrick Hoffman (read his interview here) and today we inspected the novelties for the brand.

This beast has been inspired by yacht racing and features an incredible unique count down movement. The wearer can set the timer between 1 and 10 minutes, the second then hand rotates anti clockwise as it counts down. Very cool. 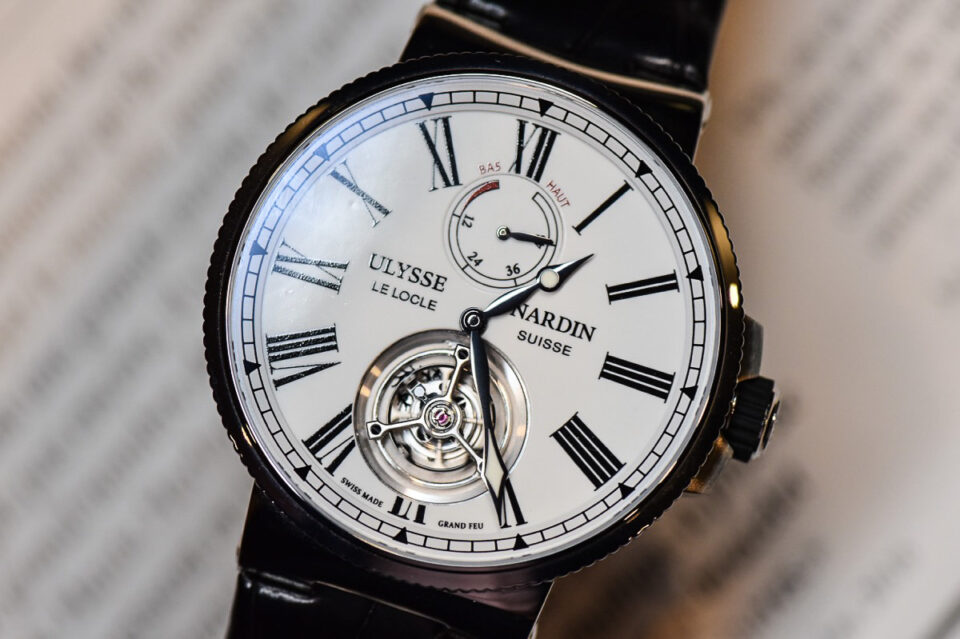 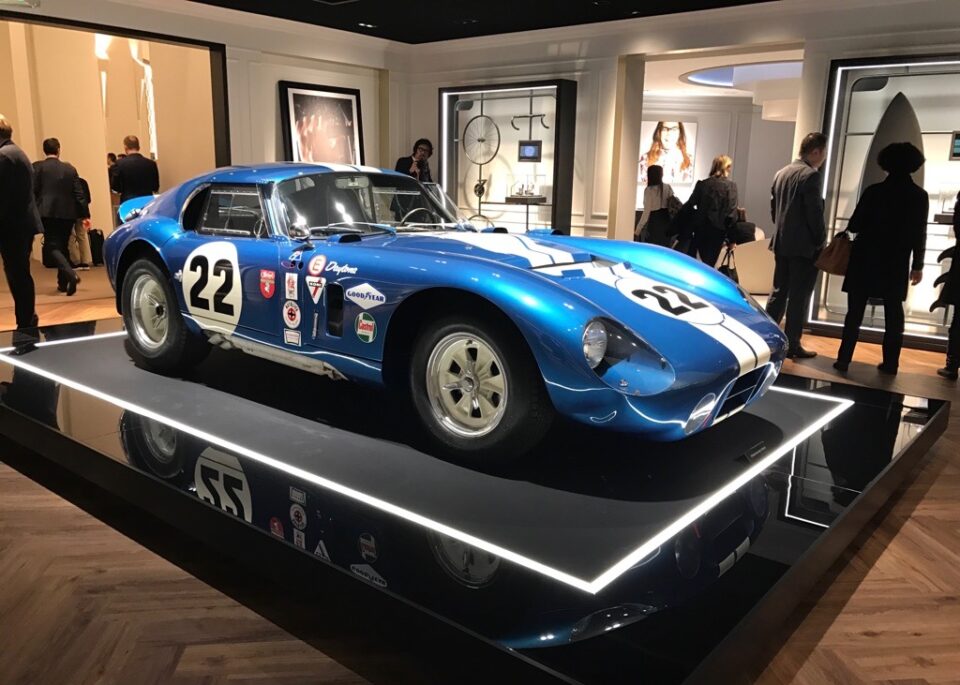 This year Baume & Mercier continue to drive the partnership with Shelby Cobra, they’ve revamped the extremly affordable Classima range have have a new project titled the ‘Capeland Club’ which we think it’s a really cool new direction for the brand. 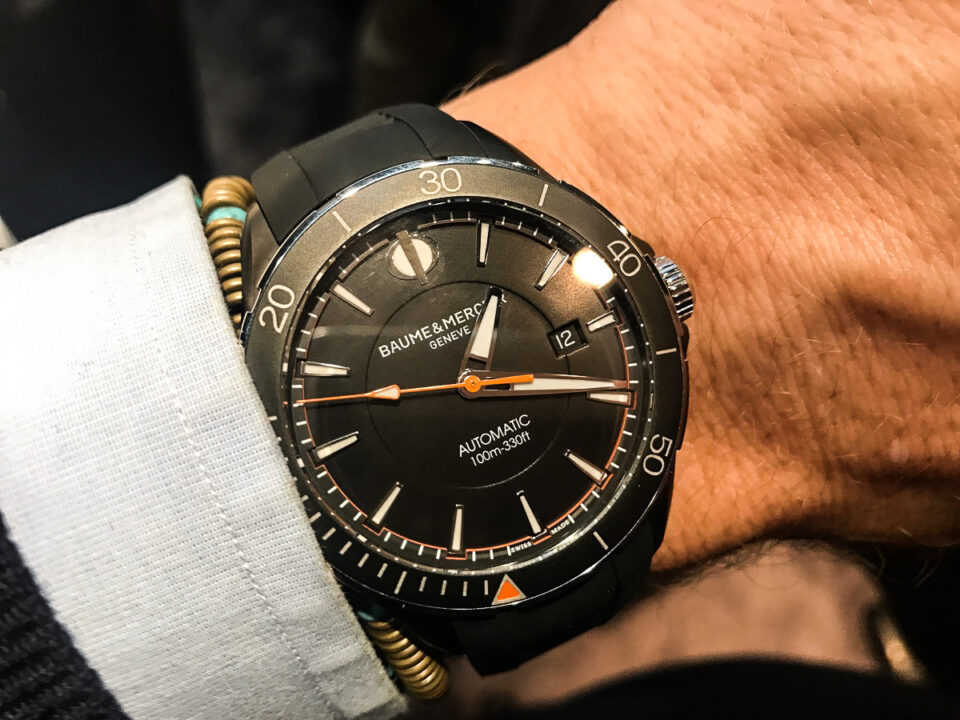 New this year we see Baume & Mercier release a more sporty watch that’s designed for work and play. Suitable for the guy who doesn’t have the means for many watches, rather one quality watch, one that he can wear for weekend sport and which will make a transition to his office wardrobe without fuss.

The Clifton Club range comes in a 42mm case and measure only 10.2mm in thickness. This means it will fit easily under your shirt cuffs for work. This is a deliverable design feature to cater for the man who CBF changing his watch. Under the hood is the Clifton Club 10340 Automatic movement. 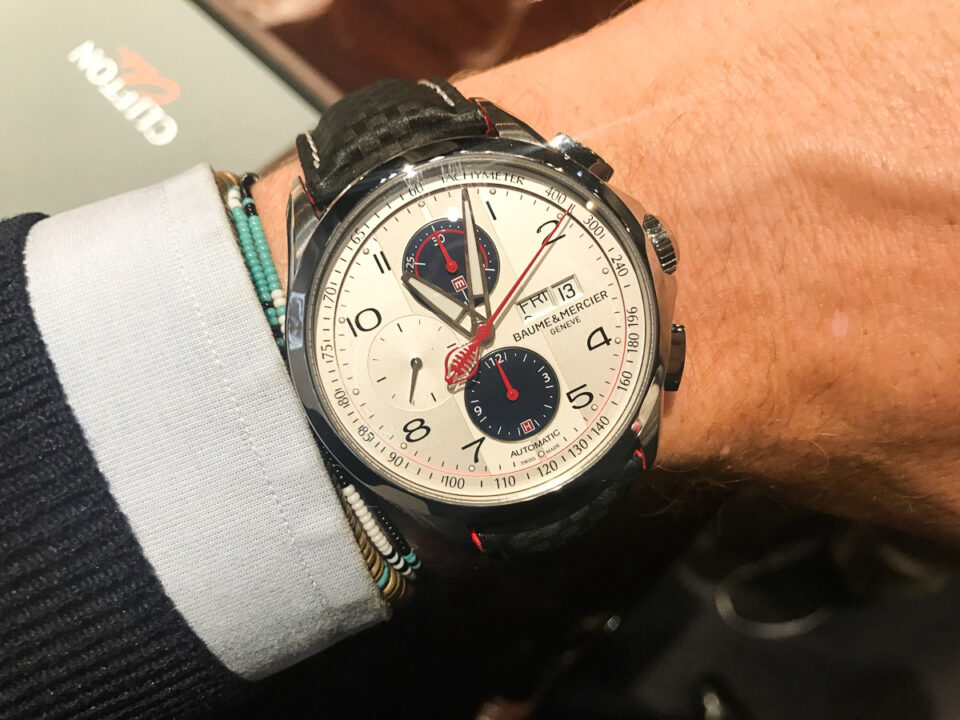 This year Baume & Mercier design director Alexandre Peraldi and Peter Brock (original designer of the Daytona) teamed up to extend the Shelby partnership with the Shelby Cobra Daytona Edition of the watch. Limited to just 1964 pieces it’s similar to its predecessor but draws inspiration from one hell of an automobile.

The Clifton Club Shelby Cobra is housed in a 44mm case with flyback chronograph, tachometer and date functions.

Possibly the biggest most celebrity driven brand of SIHH and the Richemont group is of course IWC. Today we took a look at their new pieces for 2017. A big focus for the brand this year is women’s but there were still a few cool novelties for the men.

The biggest news is the relaunch of the Da Vinci range, which is now round, rather than the original square shape.

IWC have long been in partnership with the Laureus Sports Awards and this year sees a limited edition Da Vinci featuring the striking blue dial. Set in a 42mm stainless steel case and featuring the 89361 calibre movement with mechanic chromo with flyback function, it’s really a standout from the collection.
Feature characteristics for Laureus are its blue design with a caseback engraved with the competition winning drawing from a 12 year old boy in Taiwan.

It’s limited to 1500 pieces and proceeds go to funding projects for Laureus. 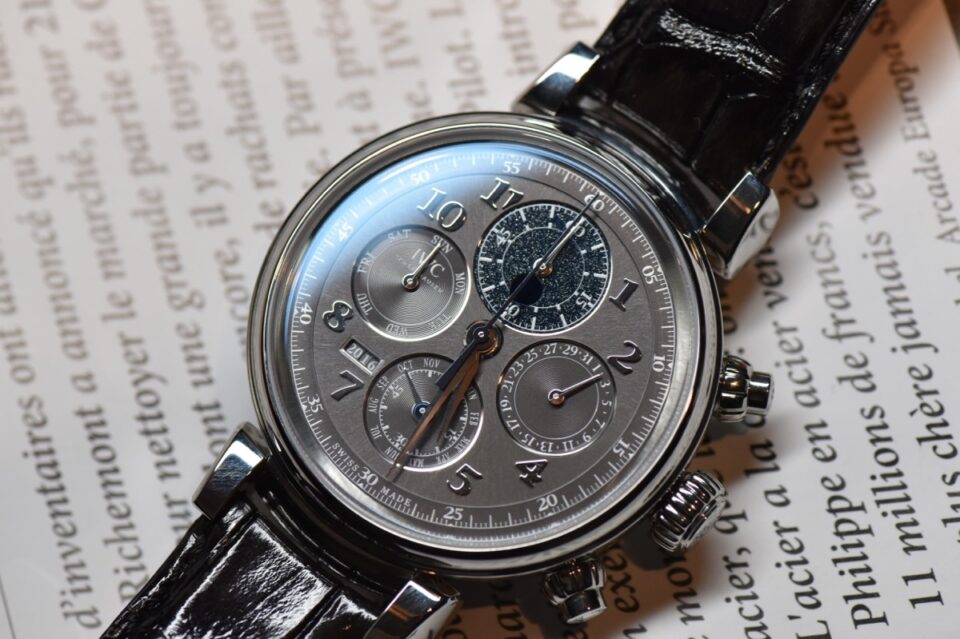 This beast combines both calendar and chronograph functions and is the first model in IWC’s history to wear both at 12 o’clock position. The Da Vinci Perpetual Chronograph features the Calibre 89630 – a new movement specifically made for this watch. 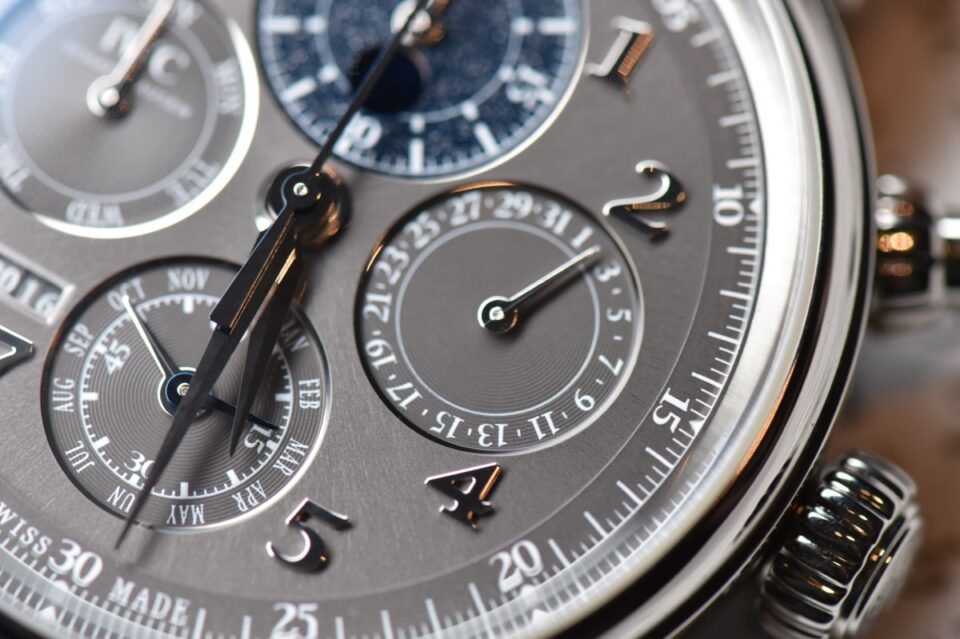 It’s so damn smart that it takes into consideration the complexities of leap years. Even I can’t do that and I’m 37 years old. The timepiece boasts a 68 hour power reserve, comes in a 43mm stainless steel case and sapphire glass back so you can see all the intricate inner workings.

Looks like it’s the Antiplano which is being updated in celebration of its 60th anniversary. 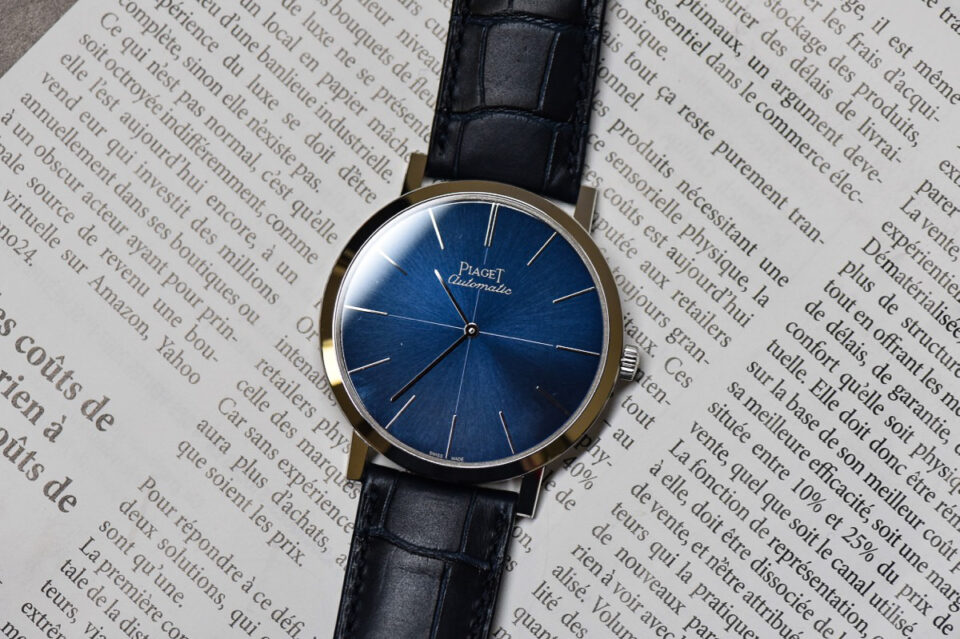 What’s surprising is the size of the models at 43mm (in white gold) which has considerable presence on the wrist despite its simplicity and thinness. The colours in which the model is available are blue, brown and green. 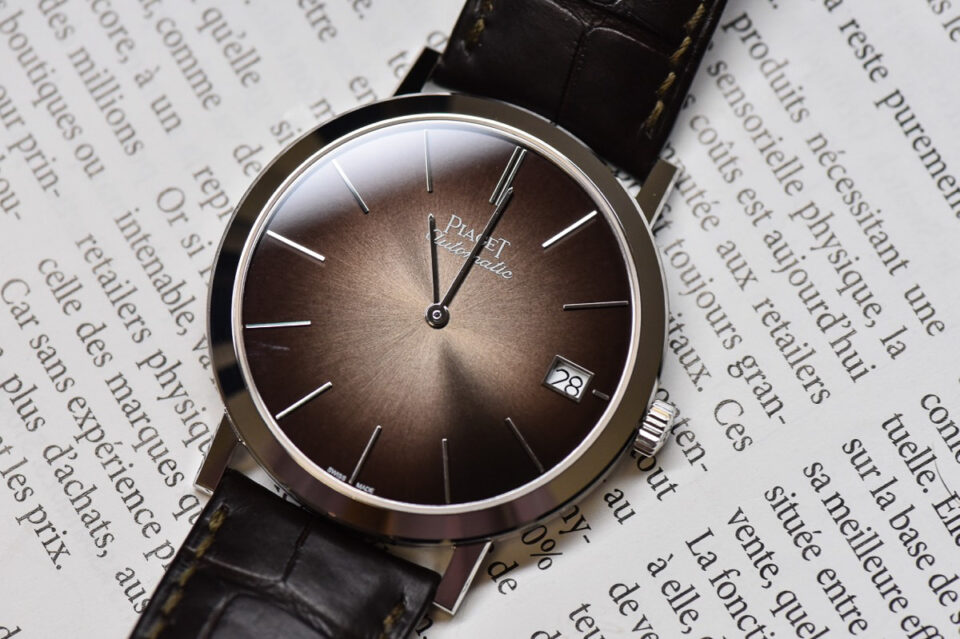 Each dial has a sunburst effect dial and is powered by the self winding Manufacture de Haute Horlogerie Piaget Calibre 1200P (2.35 mm thin).

One of the surprise packages for us this fair is Parmigiani. Whilst they’re not the brand an average man would immediately choose, we do think there’s some great pieces in this year’s collection.

For the uneducated, the Parmigiani brand was founded in 1996 by Michel Parmigiani. Previously the brand was known for restoring watch artefacts and rare jewellery. 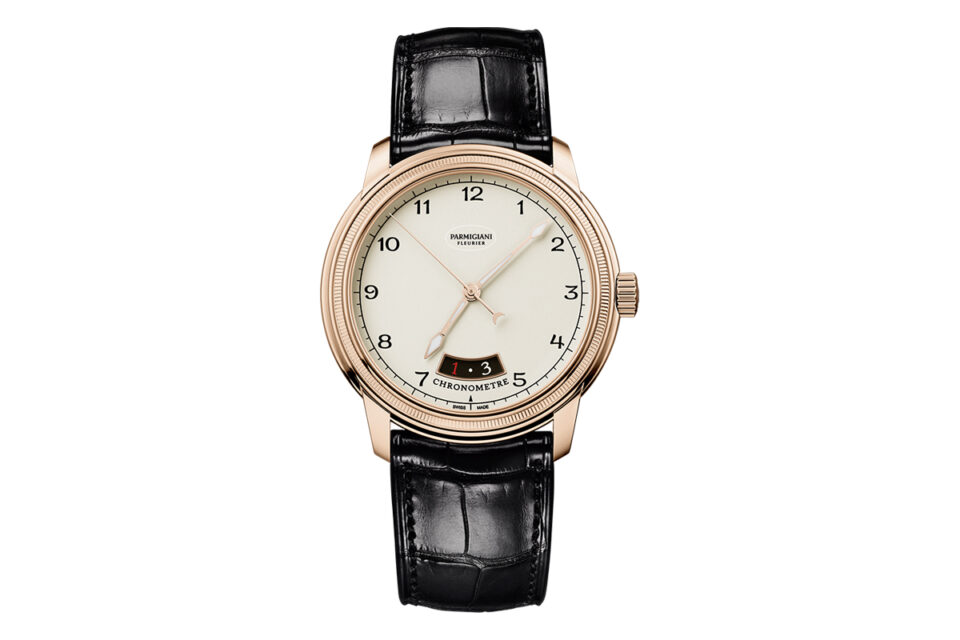 It was the first watch designed by Michael Parmigiana in 1996 and for this year it has been reissued in its most faithful form. The iconic design has been inspired by neo-classical architecture which gives it a truly unique look. It features a hand knurled bezel, Parmigiani’s PF31 movement which is COSC certified with a 55 hour power reserve. It will be available in four versions which all come with HERMES alligator straps.

The price will be around 14,800 GBP which is not too bad considering what you’re getting. 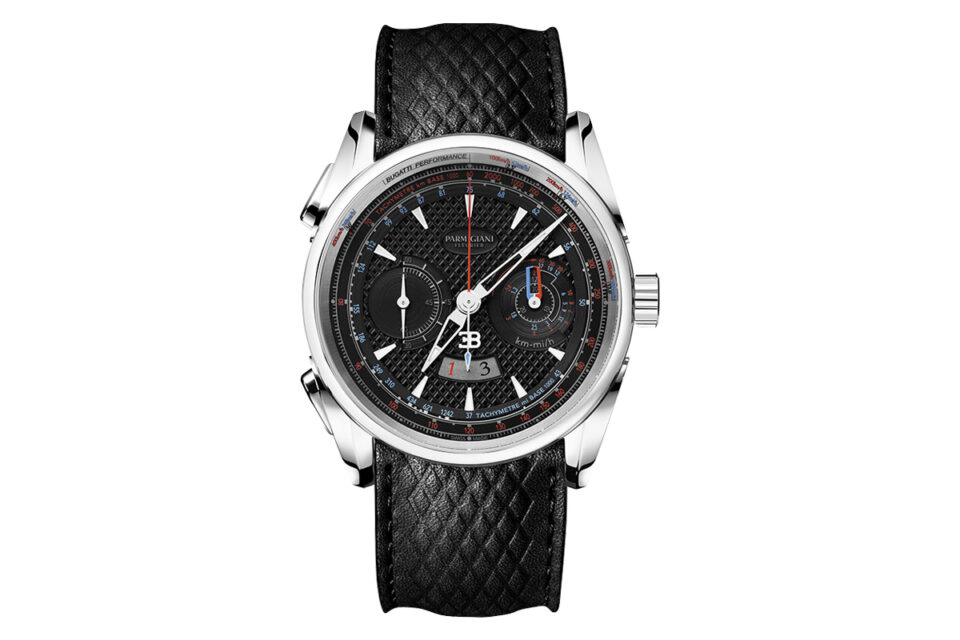 Retail on this bad boy will be about 18,300 GBP, a mere fraction of what the new Bugatti Chiron would cost you.

This year Richard Mille have put all their eggs in one basket and launched just one watch. Not seven, not twenty, but one. They’ve teamed up with former F1 giants McLaren – not exactly joining them at their peak but let’s say there’s a lot of upside in their 10 year partnership.

The watch weighs only 40 grams…including the strap. The movement itself is only 7 grams and has been tested to 5000Gs, so you can go wild with a hammer and the thing won’t break. Also worth noting is that the RM50-03/01 is the world’s lightest mechanical chronograph.

The RM50-03 has split second chronograph allowing you to track two different events, allowing you to run laps around the kitchen bench with your very expensive watch on your wrist.

There’s only 75 pieces created so it’s perfect for the McLaren owner.

The price is 996,500 GBP…yes, a true bargain at the price of seven McLaren cars. Strangely enough the watch was not there to photograph.

Wondering what crazy contraptions Roger Dubuis has in store for us this year…besides overly large watches that only Russians would wear. There I said it.

Regardless, their collaboration with Pirelli should have the Formula 1 heads clapping their hands. 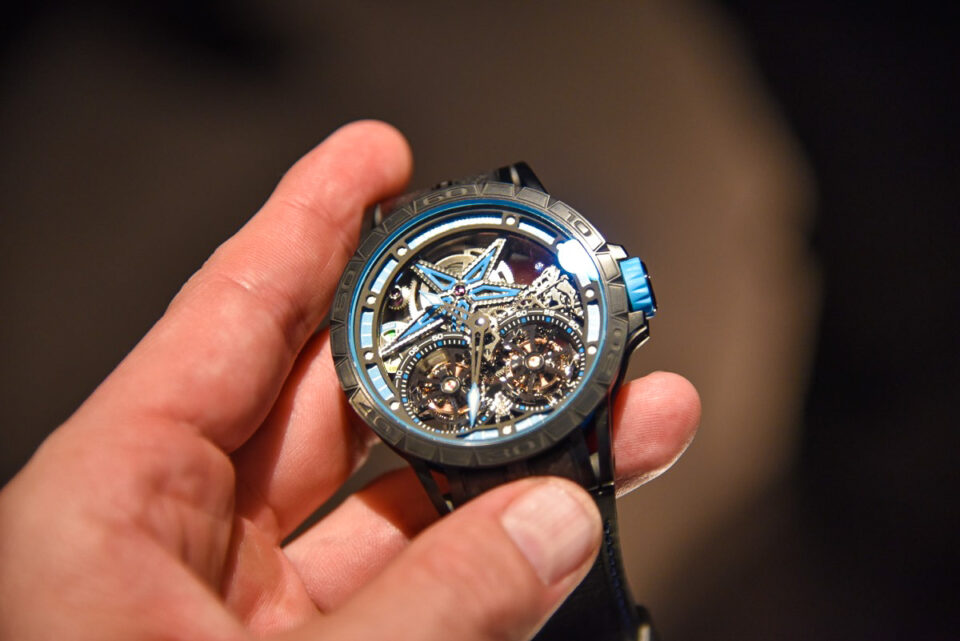 Visionary engineers at Pirelli have met with watchmakers at Roger Dubuis to create something rather unique with F1 pedigree. The concept is actually simple and pretty cool to be honest.

Pirelli collected the winning tyres from the 2017 Monaco Grand Prix and created individual straps for the limited edition Roger Dubuis watches. Each watch comes with a certificate that certifies the tyre has come from Lewis Hamilton’s winning car. On every race tyre there is a bar code which also is appears on the inside of the strap.

Roger Dubuis and Pirelli have used what they call an ‘outstanding’ pattern inside the strap for the entire collection, which is a variation of their road tyre patterns.

After the grand release of the Reverso last year we see JLC moving into some more affordable watches to get people into the brand. This new entry level steel collection known as the Master Control Line. We think these will be a hit for the brand with their sporty yet refined look. The range has three models, Chronograph, Date and Geograph.

The chronograph is definitely one of our favourites.

We caught up with Ulysse Nardin CEO, Patrik Hoffman to discuss the current state of the watch industry and how important China is in relation to the ongoing economic force of the industry. We will be publishing a full interview with Patrick later this week.