Snakes tattoos are one of the most popular tattoo ideas for men because they can be interpreted in a variety of ways. Throughout history, the snake has been seen as a symbol of both good and evil; the former, because a snake sheds its own skin, making it a symbol of rebirth. But, according to the Bible, it was a snake that tempted Eve with an apple, so it can also be seen as a symbol of sin. Not to mention, snakes can be venomous and predatory, further inferring they are bad creatures.

Regardless of your reason for wanting to get a snake tattoo design – and of course, your tattoo doesn’t even need to have a meaning, it can just be a work of art – due to their shape, they can be drawn – or inked – onto your skin in a variety of ways and sizes, making them a truly versatile tattoo design option.

If you’ve decided you want to get a snake tattoo but need a little bit more inspiration with regard to how you want it to look, we’ve rounded up some of the most popular snake tattoo design ideas. Because, after all, a tattoo is for life, you need to make sure you’re 100 percent happy before you go under the needle.

What does a snake tattoo mean?

Snake tattoos can have different meanings depending on the culture or the country they're associated with. A snake tattoo can be a good option for those who have gone through significant life changes, for example, because a snake is able to shed its skin and effectively start a new life. The Japanese believe snakes bring good fortune whereas Christians see the snake as a symbol of temptation.

Of course, a snake tattoo doesn't have to have meaning to you, you may simply like the design or the the animal itself. But if you are able to attach a meaning to it, it will make your snake tattoo more sentimental. 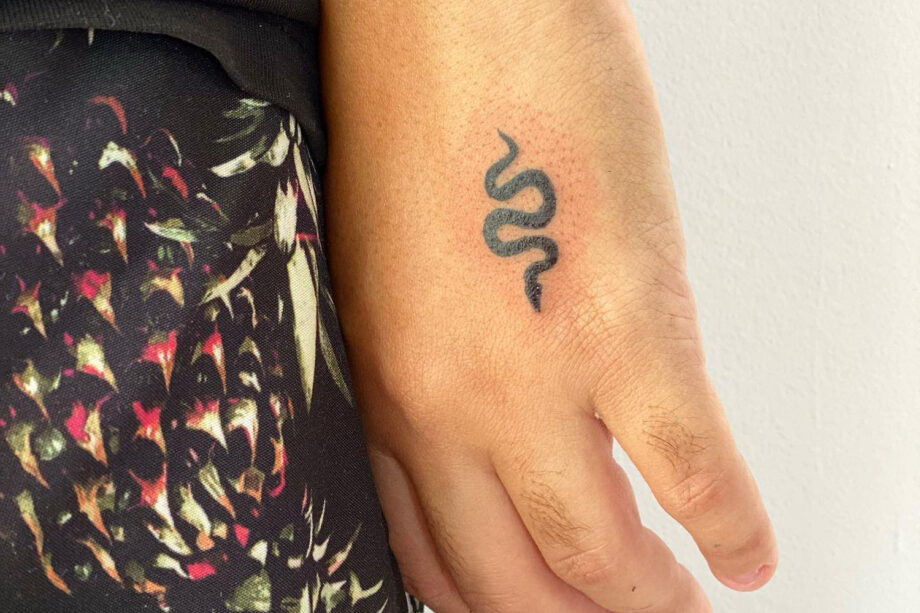 Starting with the most inoffensive and easiest snake tattoo: something small. A small snake tattoo design can be inked anywhere on your body, although because of the small size, lends itself well to going on your ankle, wrist, behind the ear or even on your finger, depending on if you want your snake to be in a spiral or to be more straight. A small snake tattoo is a perfect option if you want a fine line tattoo, too, because it will look most effective in black ink and with incredibly fine lines to create the detail. 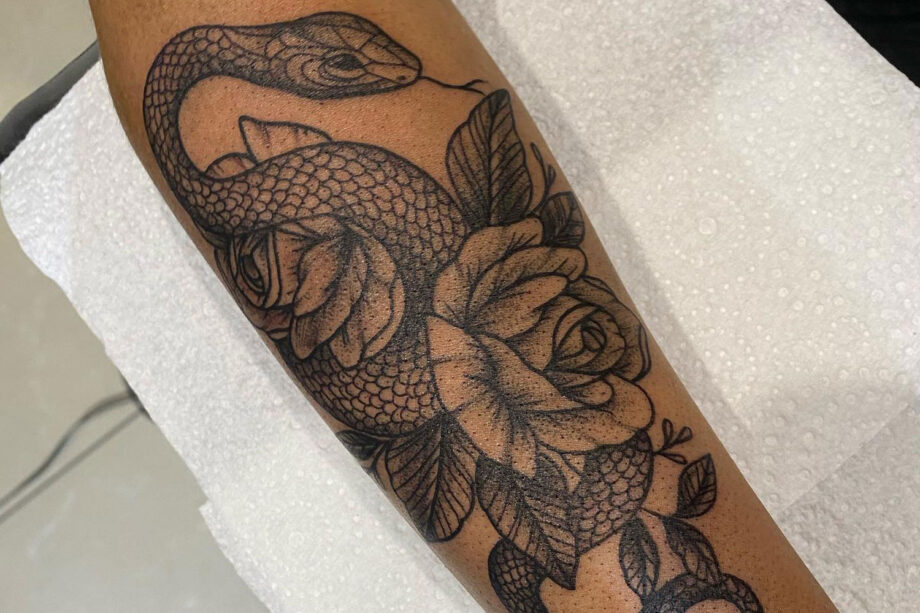 A snake and rose tattoo is an incredibly popular design choice due to the contrast between the two subjects. Snakes are primarily regarded as a symbol of bad and evil, while a rose is associated with love and beauty. However, some interpret the combination of a snake and a rose in one image to symbolise a love that becomes so strong it becomes obsessive, signifying a loss of innocence. 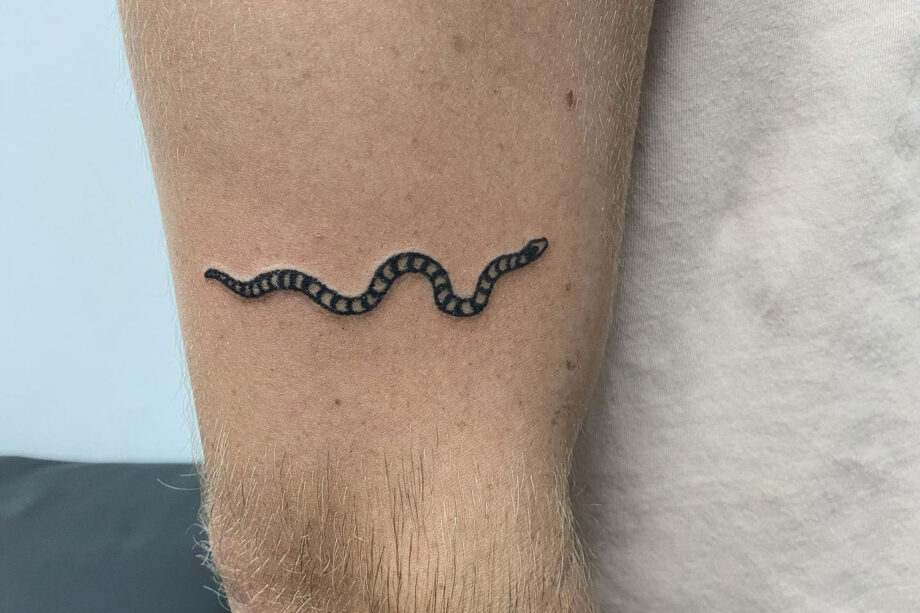 If you want to get a snake tattoo done quickly, then a simple design is your best bet. Similar to a small snake tattoo, a simple snake tattoo will likely be done in black ink and have very little detail, such as the scales of the skin. Instead, you can get yourself a snake tattoo that is completely black, but the great thing here is that it can be drawn on you in any size you wish. 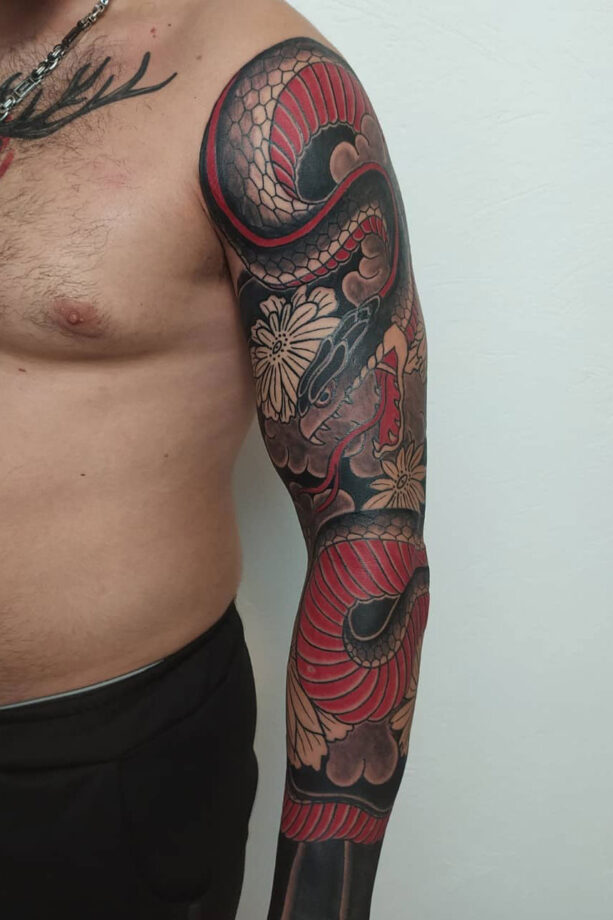 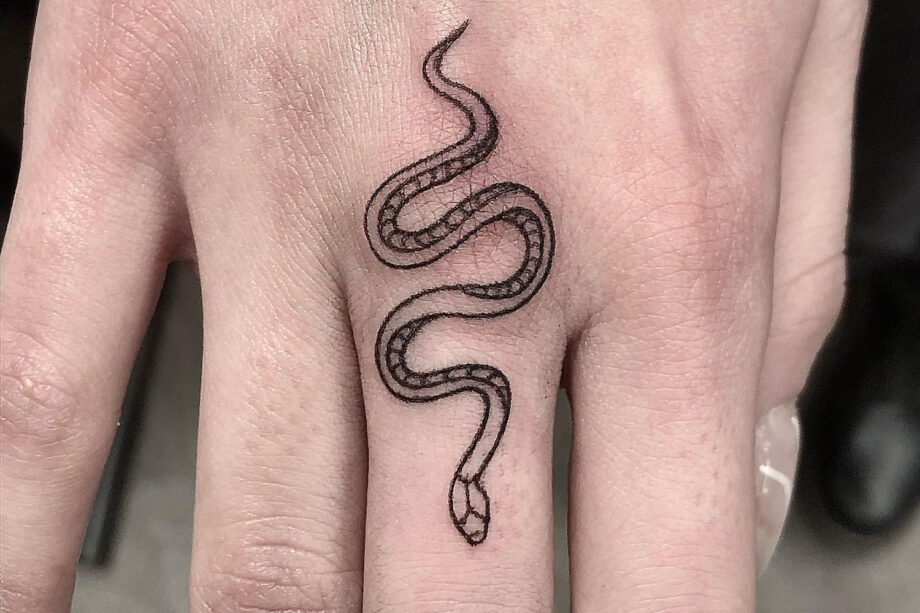 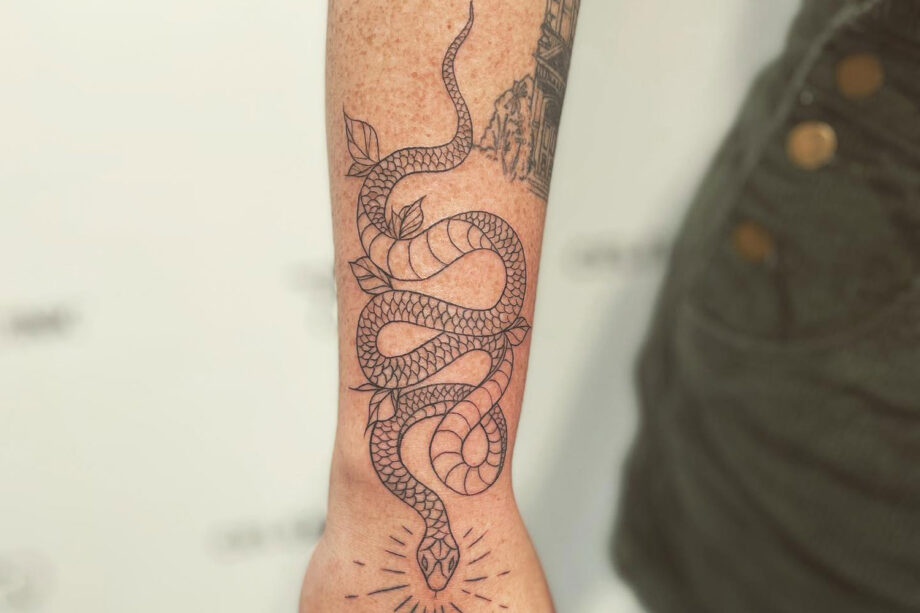 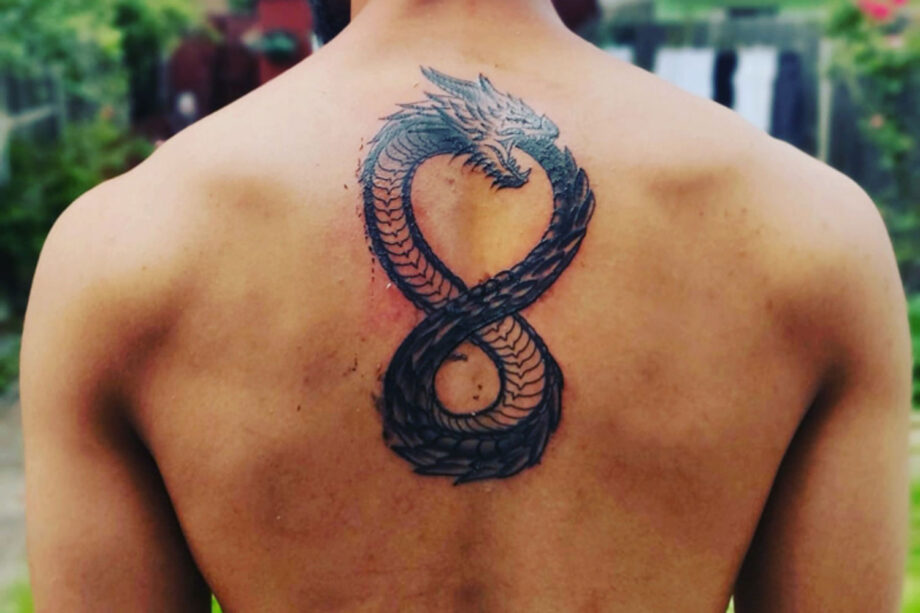 If you really want to go big with your snake tattoo then your back is the ideal placement for to really let your ideas and designs come to life. When searching for inspiration, you’ll likely find the back is incredibly popular for Japanese snake tattoo ideas, as not only can you have a large, colourful snake tattooed onto you, but it can be surrounded with other images of Japanese culture. Be warned, though, a Japanese snake tattoo on your entire back will require a few sessions and won’t come cheap. 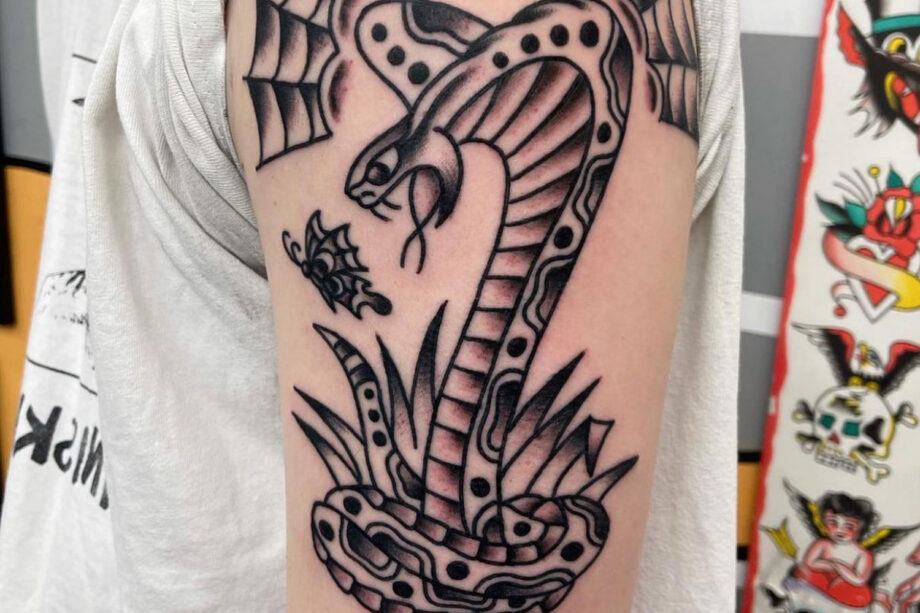 A traditional tattoo can be an umbrella term and is used to describe a range of design styles. Usually, they incorporate bold lines as opposed to fine lines and often introduce colour. Sailor Jerry and Ed Hardy are good examples of traditional tattoos, but traditional could also relate to tribal style tattoos.

We’ve chosen the more colourful route as inspiration for a traditional snake tattoo as it can be seen as fun and will certainly make an impact. You can choose to have a complete snake, perhaps just its head, or incorporate other images such as skulls or swords in with your traditional snake tattoo. There is plenty of room to experiment. 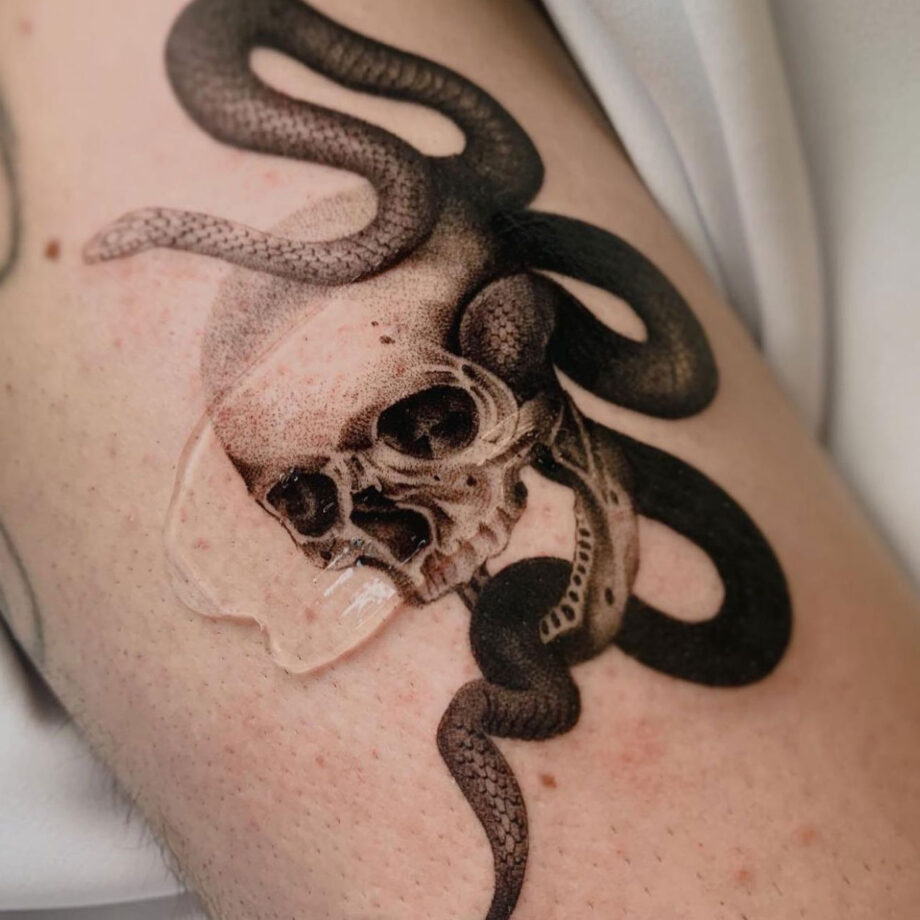 Speaking of skulls with snakes for a tattoo, the skull and snake tattoo idea is often associated with mortality and death and only serves as a reminder that our time on this planet is finite. However, some also interpret this tattoo design as representing death, in the skull, and rebirth in the snake, since a snake is able to shed its skin. A skull and snake tattoo can be placed practically anywhere on your body, as it can be drawn in a number of different ways. 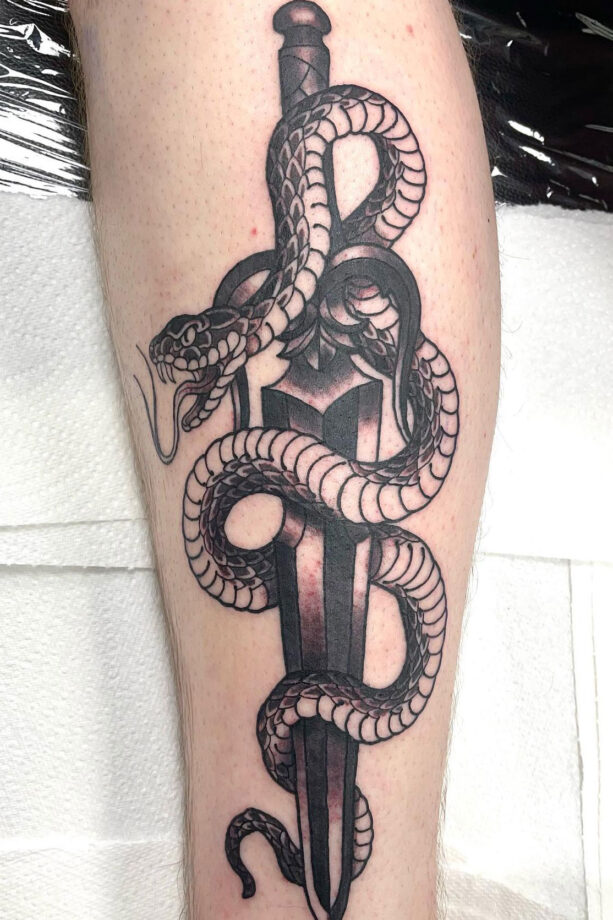 Dagger tattoos on their own can symbolise protection or death, but if you add a snake into the mix, it can change the meaning entirely. Many interpret a snake and dagger tattoo to mean overcoming obstacles and facing fears. Others interpret a snake winding around a dagger as a symbol for the Roman God, Mercury, because he was said to have been gifted a magic wand by Apollo, which later turned into the caduceus; a staff with intertwined snakes.

A snake a dagger tattoo lends itself well to being placed on a larger area of skin, such as the forearm, chest, back or even your thigh. 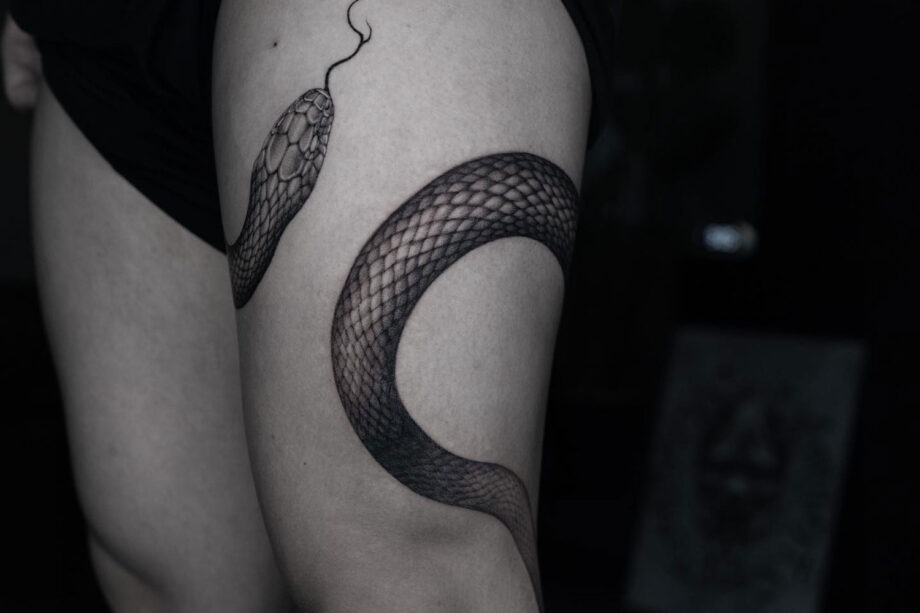 While arm and upper body tattoos are often well-received and the most obvious placements for tattoos, some may have differing opinions on leg tattoos. However, getting a snake tattoo on your thigh could be a perfect compromise, since it will spend most of its time being covered up. The thigh is also a large area of skin, so you have greater freedom with regard to what style of snake tattoo you want. You can rest assured, too, that because the skin on your thigh tends to be thick, it means you’ll have a relatively pain-free experience when going under the needle. 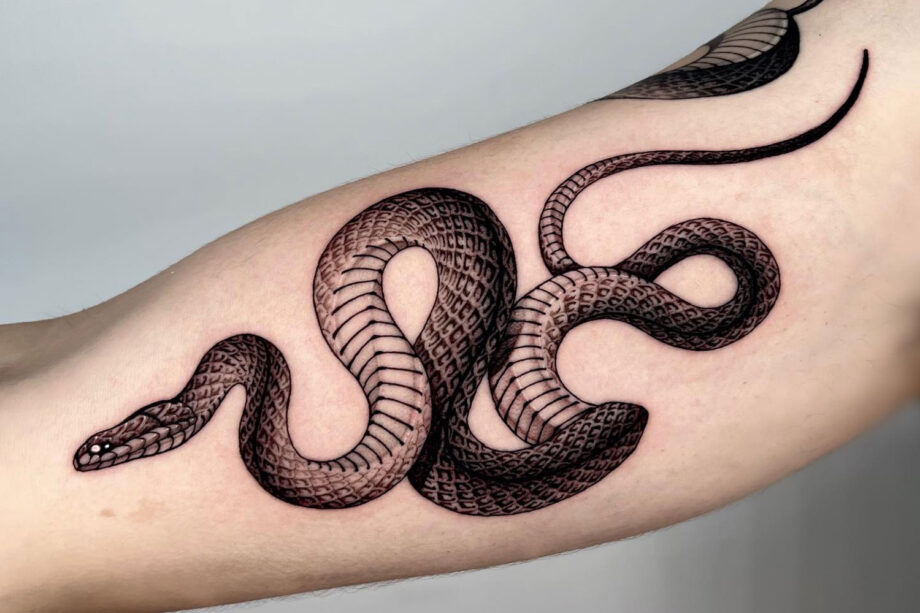 As we alluded to earlier, you could get a snake tattoo on your forearm and have it slither its way up your arm all the way to your shoulder. Alternatively, you could have a snake tattoo placed on just your upper arm, where it will likely be covered up most of the time. Popular snake tattoo styles for the arm include traditional and fine-line and realism, but you could go all out and get an incredibly colourful Japanese style snake tattoo that becomes a part of a full sleeve. 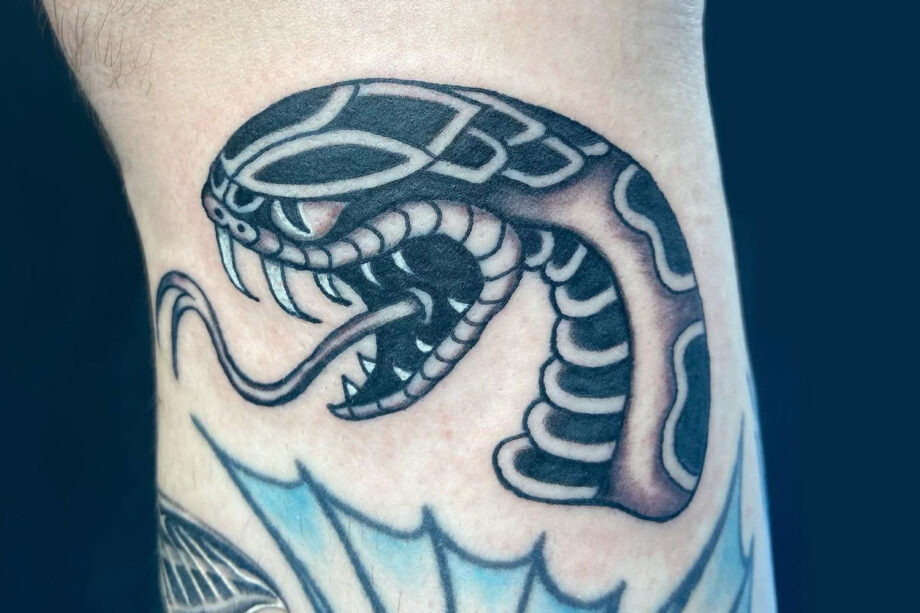 Who said you had to get an entire snake tattooed onto you? We certainly didn’t. If you want, you can simply get a snakehead tattoo anywhere you want on your body. It’s highly likely that if you get a snakehead tattoo then it will be depicted opening its mouth and showing off its fangs, making this a great tattoo option for those who want to give off an intimidating aura. 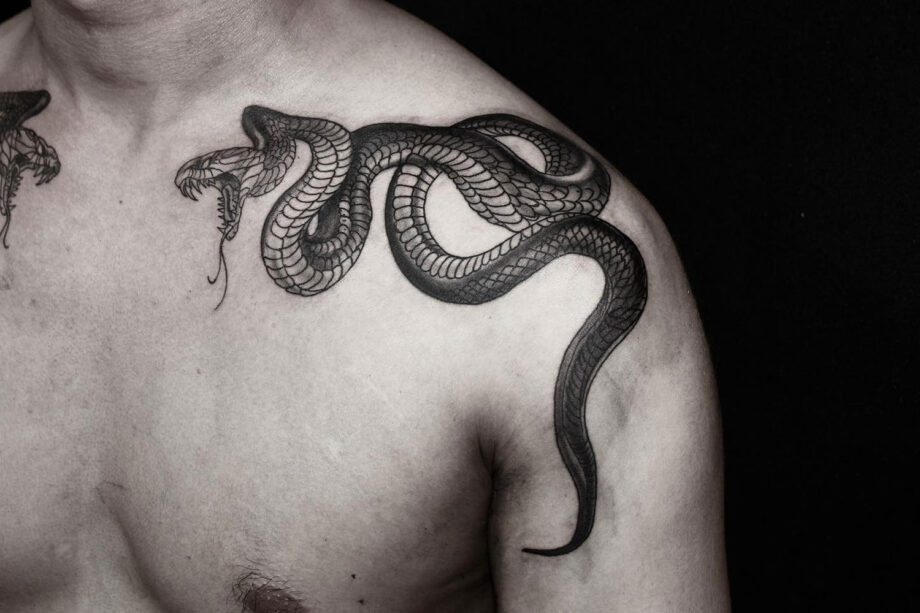 A snake shoulder tattoo is another very worthy option if you want to get a snake tattooed on your body. If you have a snake slithering along your collar bone towards you shoulder and then down to your bicep, it can help to give off the illusion that you have a broad stance. A snake tattoo on the shoulder also draws attention to your shoulder muscles and for some, a snake on the shoulder could be viewed as having a protector by your side. 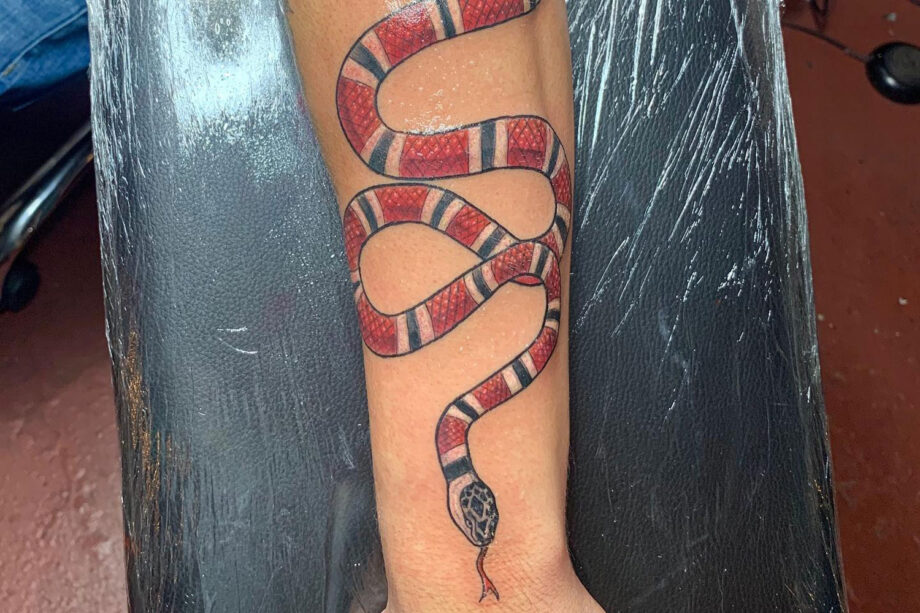 Italian luxury fashion house Gucci often uses the scarlet kingsnake as a symbol in many of its pieces and is nearly always depicted in a specifically coiled position. This incredible use of colour, along with the fact the scarlet kingsnake isn’t venomous or harmful to humans, makes it a perfect tattoo idea for those who have a calm personality. The Gucci snake tattoo can also be completed in either a simple style or something more on the verge of realism. 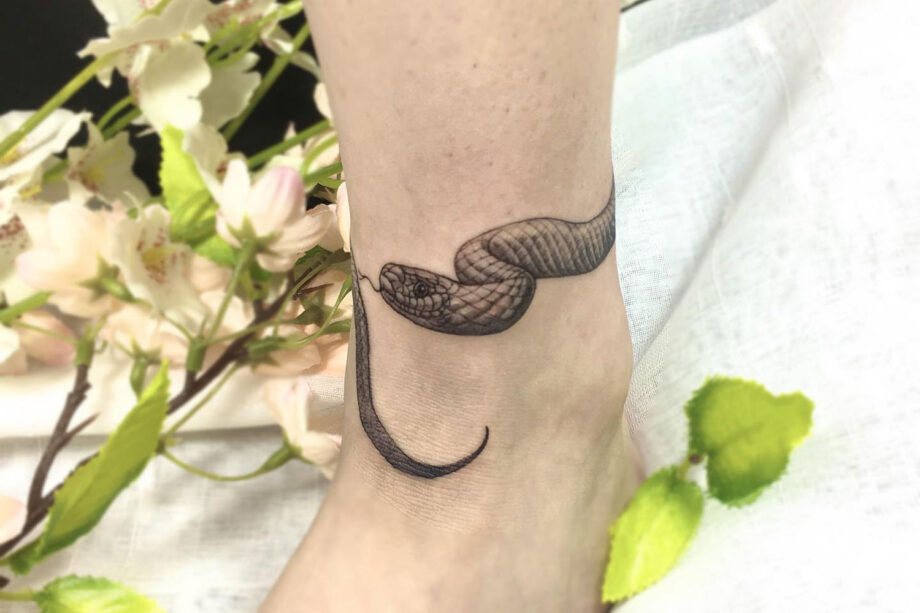 A snake ankle tattoo is another option for those who perhaps have yet to get their first tattoo, or just want to get something that can be easily covered up. You have plenty of options with regards to how big or small you’d want your snake ankle tattoo to be as well. It could be a simple small on around the ankle bone, or a longer snake that stretches from the foot, along the ankle and up towards your shin. 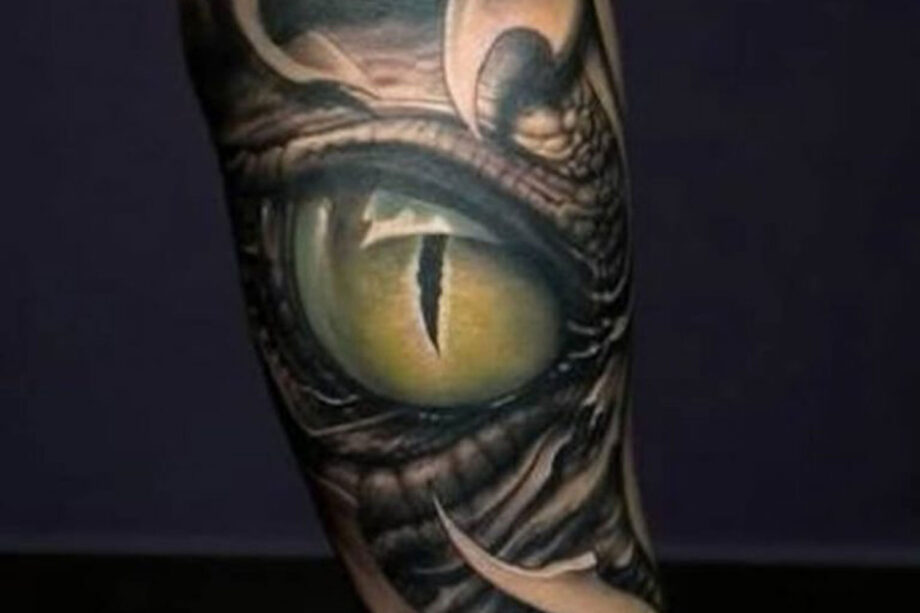 A snake eyes tattoo can be interpreted in a few different ways. Most see a snake eyes tattoo as a symbol for being able to charm others and getting what you want, in a similar vein to the snake in the Disney movie, The Jungle Book. Alternatively, a snake eyes tattoo doesn’t have to be the eyes of an actual snake. In gambling, snake eyes refer to when two die are rolled and both stop on 1, so you could be clever and have this tattooed on you instead. 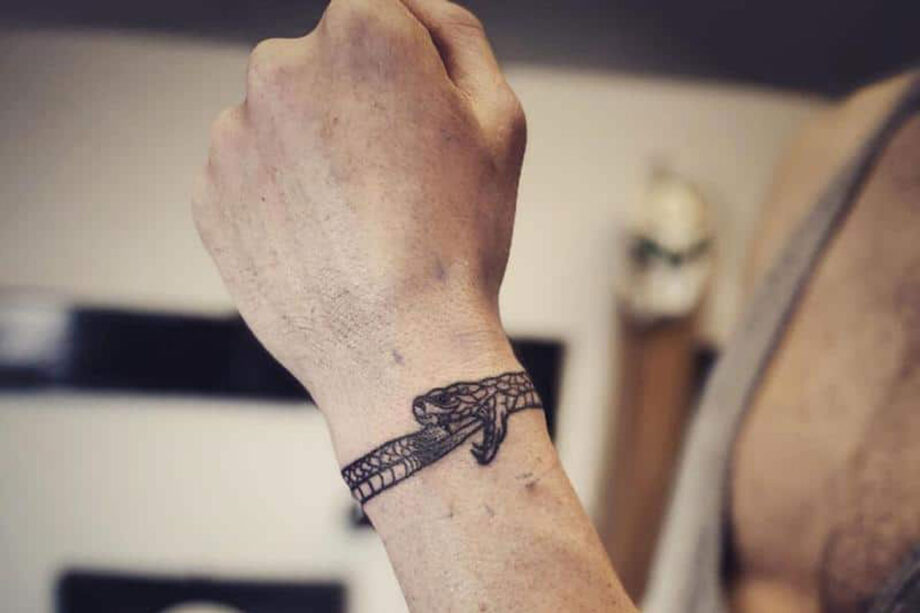 The wrist could be one of the best placements for a snake tattoo since it could essentially be seen as a tree branch, and so a snake can wrap itself around it. This makes a snake a good substitute for the simple band tattoo if you were already thinking of getting one of those. A snake offers a more detailed cuff option at the very least, even if you’re not exactly a huge fan of snakes. Alternatively, you could get a coiled snake tattoo on just the top of your wrist, and perhaps have it extend up the forearm. 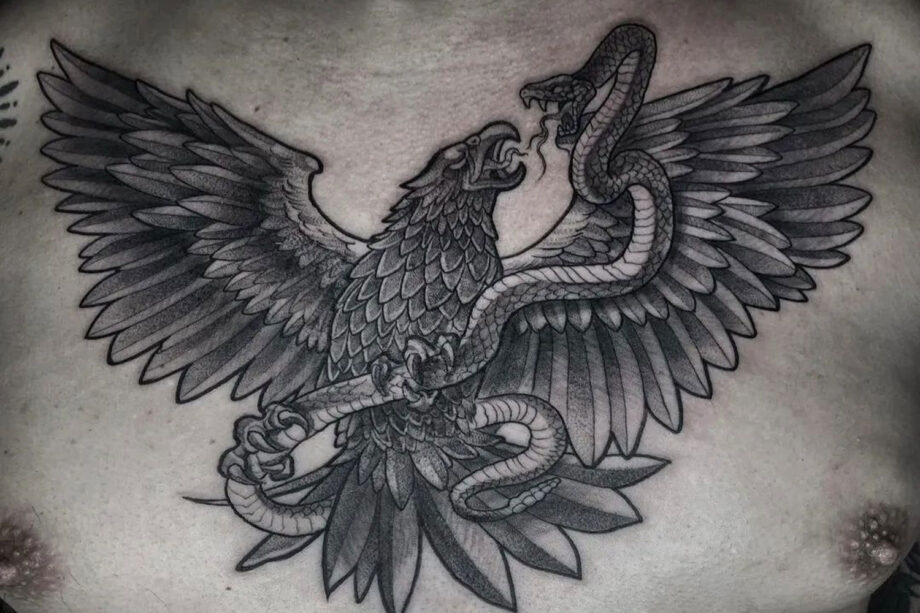 Your chest is another large area of your body you can get a snake tattoo, so if you know you want a snake tattoo that is incredibly detailed, you shoulder definitely consider getting one here. The chest is a good spot if you want to get a snake connected to another object or animal, such as a snake with a dagger, or a snake and an eagle. Remember though, a chest tattoo really will make a statement, so it’s crucial you know you’re going to be happy with it before you visit a tattoo studio. 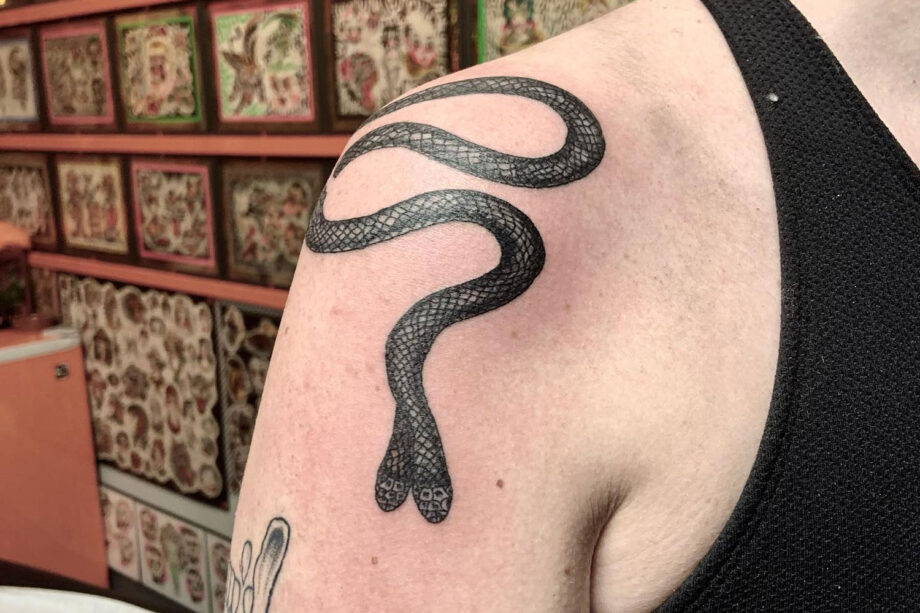