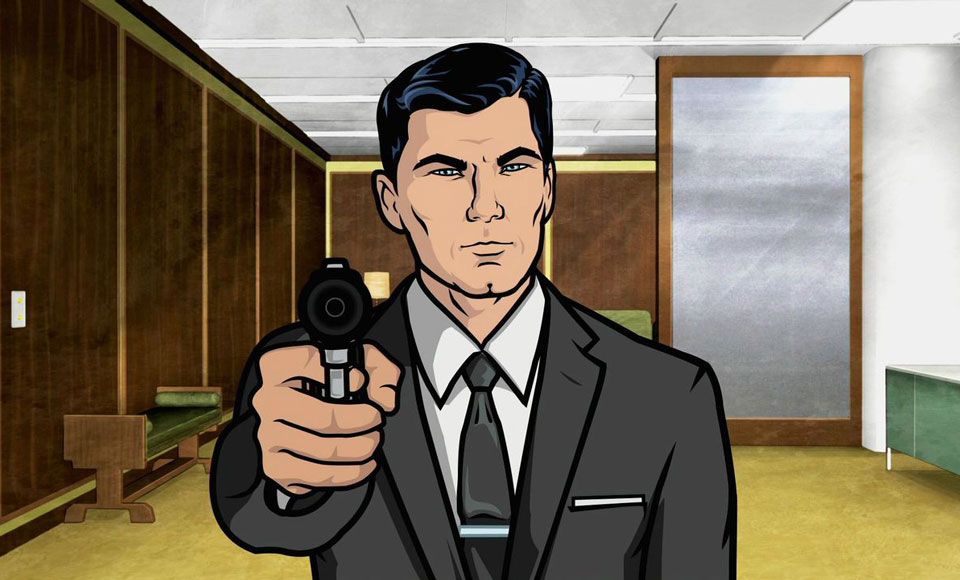 An iconic representation of all that is seductive about masculinity – his martial prowess, easy charm, Bondian good looks – Archer resonates with an aspiring generation of young office workers which dream of achieving the necessary preconditions to ‘alpha’ manhood.

After all, who doesn’t want to drive a Dodge Challenger, wear super 220 merino wool suits, and live the high-spy-life in a NYC penthouse?

However, it’s probably worth mentioning he is a] fictional and b] a satire of the aforementioned male narrative.

He botches missions, persistently stumbles into HR nightmares, can’t handle his booze and has a nuanced relationship with his mother (the context of which deserves a psychiatric manual, not an article).

However, the  animated man can dress – and what could possibly be more important than taking style advice from a goddamn cartoon character?

Here, I’ve collected a few nuggets of sartorial wisdom that have been uploaded to his Twitter in an attempt to break the fourth wall.

Archer says: “When choosing a dress shirt, know what prints work for your body. Here’s a hint – it’s between zero and none.”

For sure, the classic white & white shirt/pocketchief combo is an elegant and dependable choice out of which any man can enjoy substantial mileage.

But for five days in a row? Your mates at work will think you’re recycling the same shirt everyday and your missus will begin to think she has selected a mate who lacks imagination.

I’m taking the middle ground on this one. No one is asking for you to wear multi-coloured Bengal stripes, but a couple blue and white micro-check shirts, and a thin pink stripe option go a long way toward breaking up your weekly corporate game.

Wear a crisp white shirt on Monday and Friday to open and close the week (or something).

Archer says: “Your lapels shouldn’t be so big, they make me hungry for a slice of pizza.”

Unless the office has a 70’s throwback party on Friday, leave the off-the-shoulder lapels at home (sorry, Tom Ford). But don’t go too far the other way. Pencil-thin lapels scream too much 60’s mod and exude a juvenile, private-school quality that detracts from the serious businessman you’re trying to be.

Again, middle ground. Find something that will fill out your chest and offer a degree of proportionality, while not overwhelming your upper body. Easy peasy.

Archer says: “With cufflinks, go for understated elegance. Don’t wear tiny snow globes on your wrist unless your statement is, ‘I am Santa Claus’.”

Same goes for tap-shaped cufflinks, because you’re not a plumber and the boxing glove option, because no one really believes you when you say “yeah dude, I do MMA on Tuesday nights”.

This applies to your accessories. When fussing over a tie bar, lapel pin, or pocketchief, keep it modest. You’re not trying to overwhelm your peers with your sartorial taste.

You do, however, want to offer subtle, inviting hints of how much better dressed you are than them.

No disrespect towards the gallant men and women that entertain during carnivals, but if your hilarious tie is the only thing pulling your day-to-day out of despair, you need a therapist, not a men’s lifestyle magazine.

Archer says: “Whoever told you it was okay to wear navy with black is trying to ruin your life with crushingly slow, public ridicule.”

Aside from your immaculately polished, handmade-in-Northampton stompers about which all your mates are madly jealous, you should keep black to a minimum in your weekly office uniform. Doubly important, if your suit is on the darker end of blue.

A black shirt and blue suit worn together will make you look like a bouncer, or an up-jumped anime character. A black tie and blue suit may not lead to public ridicule and eventual downfall.

But it will make you the sombre-looking guy in the office. Archer is right, sans hyperbole – keep your colour marriage in mind.

Archer says: “You shouldn’t compare yourself to others…unless you’re wearing a Super 220 Merino Wool suit and they’re not.”

I’m calling our favourite (fictional) master of espionage out on this one. Your suits are a uniform, yes – contemporary battle-dress for the modern corporate warrior. They’re not however a license to look down on your peers.

Nor do they give carte blanche to smirk at the guy on the street who doesn’t wear a suit to work. Be a good bloke. It’ll make the Super 220 Merino Wool suit as it’s more delicate than Donald Trump’s ego. The man makes the suit, not the other way round.

Archer might be a pretty hopeless spy. If everyone is in on the game that you’re up to the secret business, you’ve probably failed the fundamental precondition of success.

Ignoring that, his rampant alcoholism and abstention from responsibility hasn’t stopped him (or the studio PR team) from crafting a decent entourage of style tips with which you can approach the working week in greater confidence.

So you might not have the penthouse or Dodge Challenger yet but at least you’ll be on your way to creating the impression that you do or one day will.